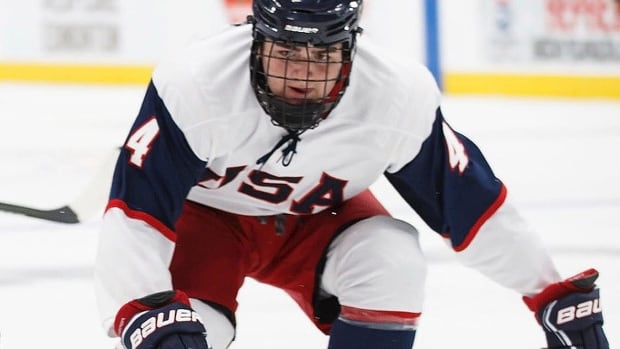 The Arizona Coyotes said they are working to educate draft pick Mitchell Miller about diversity and inclusion after a report surfaced that he bullied a Black schoolmate beginning in junior high school.

The Arizona Republic on Monday posted an interview with Isaiah Meyer-Crothers, who said he was dismayed when he learned the Coyotes selected Miller, 18, in the fourth round of the NHL draft earlier this month. He said he and Miller grew up together in a suburb of Toledo, Ohio, and that Miller bullied him and often made racist comments toward him.

Bill Armstrong, the Coyotes new general manager, said he wasn’t part of the group that chose to select Miller but that the club was aware that Miller previously had admitted to bullying Meyer-Crothers.

“Our scouts were made aware of his history and the bullying incident that occurred in 2016 when he was 14 years old,” Armstrong said.

“Mitchell sent a letter to every NHL team acknowledging what happened and apologizing for his behavior. Mitchell made a huge mistake, but we are providing him with a second chance to prove himself. We hope that he uses his platform moving forward to raise awareness about bullying and to discourage this type of behavior.”

Meyer-Crothers, who has developmental disabilities, said Miller used to hit him and also called him “brownie” and the “N word.”

“He pretended to be my friend and made me do things I didn’t want to do,” Meyer-Crothers told the newspaper. “In junior high, I got beat up by him. … Everyone thinks he’s so cool that he gets to go to the NHL, but I don’t see how someone can be cool when you pick on someone and bully someone your entire life.”

The Coyotes chose Miller, a 5-foot-9 defenceman, with the No. 111 overall pick in the fourth round. Arizona didn’t have a selection in the first three rounds after trades and the loss of a pick for violating the NHL Combine testing policy.

Last year, Miller played for the Tri-City Storm of the United States Hockey League, where he was named to the All-USHL First Team after scoring 33 points (eight goals, 25 assists) in 44 games. He is a freshman at North Dakota, and the Coyotes will retain his rights throughout his college career.

In a statement issued by the team, Coyotes president and CEO Xavier Gutierrez said the team did not run away from selecting Miller.

“Our fundamental mission is to ensure a safe environment — whether in schools, in our community, in hockey rinks, or in the workplace — to be free of bullying and racism. When we first learned of Mitchell’s story, it would have been easy for us to dismiss him — many teams did. Instead, we felt it was our responsibility to be a part of the solution in a real way — not just saying and doing the right things ourselves but ensuring that others are too.

“Given our priorities on diversity and inclusion, we believe that we are in the best position to guide Mitchell into becoming a leader for this cause and preventing bullying and racism now and in the future. As an organization, we have made our expectations very clear to him. We are willing to work with Mitchell and put in the time, effort, and energy and provide him with the necessary resources and platform to confront bullying and racism. This isn’t a story about excuses or justifications. It’s a story about reflection, growth, and community impact. A true leader finds ways for every person to contribute to the solution. We all need to be a part of the solution.”

Gutierrez is a member of the league’s Executive Inclusion Council, which is charged with fighting racism and increasing diversity in hockey. He is the NHL’s first Latino president and CEO, and Alex Meruelo became the first Hispanic owner in the NHL in 2019.

Miller was charged with assault and violating the Ohio Safe Schools Act in February 2016, according to The Republic. He admitted to the misdemeanor offence, was sentenced to 25 hours of community service and had to write an apology to Meyer-Crothers. His family said Miller never apologized personally, as another boy charged in the case did.

Miller issued a statement through the Coyotes.

“I am extremely sorry about the bullying incident that occurred in 2016 while I was in eighth grade. I was young, immature and feel terrible about my actions. At the time, I did not understand the gravity of my actions and how they can affect other people. I have issued an apology to the family for my behavior, completed cultural diversity and sensitivity training and volunteered within my community with organizations such as Little Miracles,” he said.

“Over the past four years, I have had a lot of time to reflect and grow and I am very grateful to the Arizona Coyotes for taking a chance on me. I promise not to let them down. Moving forward, I want to be a leader for this cause and help end bullying and racism.”