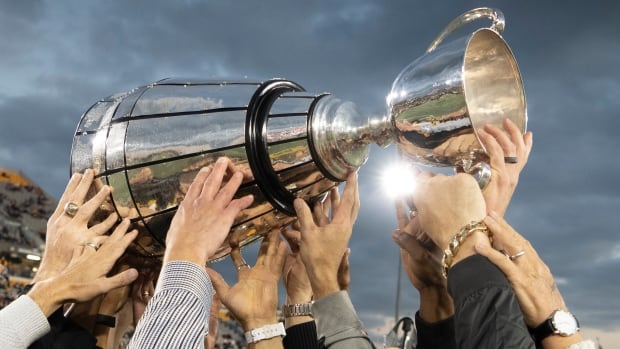 The CFL has awarded Hamilton the 2023 Grey Cup game.

Hamilton will stage the 2021 contest at Tim Hortons Field on Dec. 12. The 2022 Grey Cup will be held at Mosaic Stadium in Regina.

Regina was supposed to host the 2020 Grey Cup game, but the league shelved its plans to play last year due to the COVID-19 pandemic. It resumed action this year with a shortened 14-game regular season schedule.

“Hamilton has waited 25 years to host another Grey Cup,” CFL commissioner Randy Ambrosie said in a statement. “Under this plan, it will host two Grey Cups in three years.”

The CFL also stated it expects this year’s Grey Cup game to be played at full capacity at Tim Hortons Field. Seating capacity there is set at 24,000 and there are no plans to add temporary seats at the facility.

Fans attending the game will have to be fully vaccinated. Grey Cup tickets will go on sale to the general public starting Oct. 26.

The CFL said some traditional Grey Cup media events like the trophy’s arrival, head coaches news conference and commissioners state of the league address, will again be held this year. However, plans for a major concert series and other large-scale fan events have been cancelled due to provincial restrictions for non-seated, general-admission indoor events.

Ambrosie said that was the main reason for granting the 2023 Grey Cup game to Hamilton.

“It’s exciting, responsible and fair,” he said. “It delivers an exciting and complete championship game-day experience for this year’s Grey Cup game.

“It responsibly modifies our plan for Grey Cup week this year due to circumstances beyond our control. And it’s only fair to award another Grey Cup to Hamilton in 2023, so Hamilton gets an opportunity down the road to fully realize its bold and ambitious plans for hosting Grey Cup.”