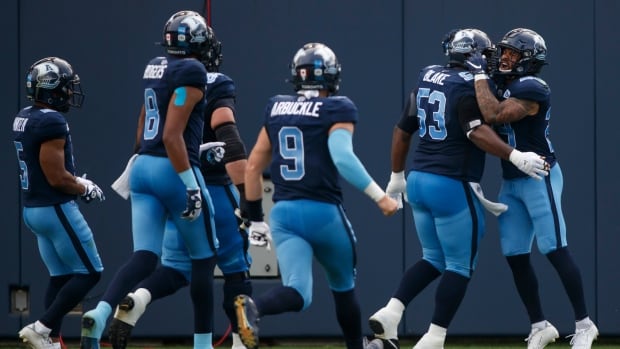 The CFL says it is reviewing what led to an altercation between Toronto Argonauts players and Hamilton Tiger-Cats fans after Sunday’s east division final.

”We are aware of the situation and we are reviewing it. We won’t comment further at this time,” a CFL spokesperson said in an email to CBC News.

The Argonauts also confirmed by email that the team is investigating the incident.

“The Toronto Argonauts, in conjunction with MLSE security, the CFL league office and local police, are investigating a post-game incident involving team personnel and visiting fans,” the team wrote to CBC News. “The club will issue a statement once the investigation is complete and any outcomes are determined.”

Video of the incident has been widely circulated on social media. Warning: these clips contain strong language.

Full Video 2/2<br>Only thing we know for certain is BMO security lost control of the situation. <a href=”https://t.co/dV4WOp7Lxj”>pic.twitter.com/dV4WOp7Lxj</a>

“When you look at the passion that’s involved and the energy that was in the stadium, many times these things happen out of passion … passion for your team, supporting your team,” Clemens said. “I think it’s best for, you know, the professionals that are involved in this to give us some more concrete answers.”

In a statement from Toronto police, investigators said two fans allegedly jumped barricades after the game and attempted to fight with players.

“Officers and security quickly intervened and both men are alleged to have been assaultive with staff and police,” the TPS email stated. “As a result, both were trespassed from BMO Field and Exhibition Place.”

The incident is believed to have occurred right after the Argos’ loss to the Ticats. Hamilton advanced to next weekend’s Grey Cup final with the 27-19 win.