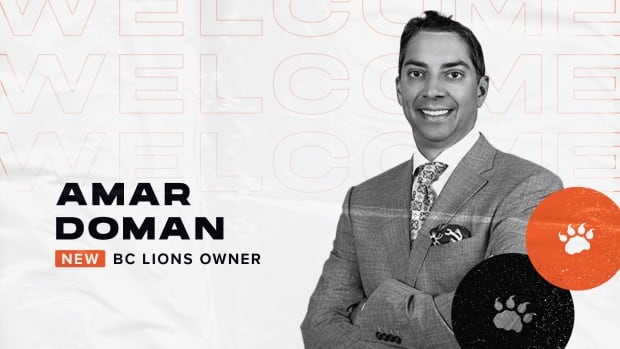 The new owner of the CFL’s B.C. Lions knows he has work to do.

Amar Doman has been a fan of the CFL club since he was 10 years old, and has watched its popularity fade throughout the community. Now the entrepreneur believes he has what it takes to reinvigorate not just the Lions but the league as a whole.

“I like to rebuild things,” Doman told reporters Wednesday after it was announced he had purchased the team from the estate of previous owner David Braley.

“I think this needs a rebuild, a community touch. And the CFL, I believe, needs a bit of a reboot and I think I’m the guy to do it. I think I can pull the community together and also get the community and the team more involved locally.”

And he’s long wanted to add owner of the B.C. Lions to his portfolio.

Doman said he talked to Braley about potentially buying the club “a few times” over the years but Braley simply wasn’t ready to let the team go.

“You can’t time business deals,” he said. “When they come up, you’re either going to move on them or you’re not. And this type of opportunity I’ve been working on for a long time, so it’s something I would have happily closed on years ago, quite frankly.”

Doman declined to say how much he had bought the team for, but noted he’s willing to dig into his pockets to ensure the team’s success.

“I’m prepared to put dollars into this team, as most owners are right now in the CFL,” he said.

“In the Canadian athletic space, sports space, you’re not in it to drive a big return. If a return comes, I think that’s great. I think the No. 1 thing you do with that return is reinvest it in the organization and the community.”

Braley, a Hamilton businessman, a Canadian Football Hall of Famer and former senator, bought the team in 1997 and was rumoured several times to be looking for a buyer before he died last October at the age of 79.

He wanted someone who was local and passionate about Canadian football, but was never able to find the perfect fit.

“David loved the Lions so much he could just never get to the finish line. It wasn’t a matter of money, he just loved the Lions,” said the team’s president, Rick LeLacheur. “So I think today, he’d be looking down and saying `Amar’s the right guy to replace me in this community. ‘I think he’d just love what’s happened today.

What makes Doman special, LeLacheur said, is that he’s long been a Lions supporter and had “tremendous patience” in waiting to buy the team.

“He’s been a fan and he’s been a sponsor,” he said. “He’s professional, he knows governance, he gets management to manage his companies. But at the same time, he’s an idea guy.”

He’s also someone uniquely positioned to connect with Metro Vancouver’s large South Asian community and get them interested in the Lions.

Doman said he’s proud of his South Asian heritage and how his grandparents came to Vancouver Island in 1906.

“I think I can definitely connect with [the South Asian community],” he said. “If I can’t, who can I connect with? And I’ll be leaning on them to come down to B.C. Place.”

“I think having Amar step in and with the energy he’s going to bring to our league, he’s obviously very successful in business, he’s got a deep and very rich history of integration of businesses and driving success,” he said. “I think that’s what we need a lot of.”

The Lions finished the 2019 season last in the West Division with a 5-13 record. They are off to a 1-1 start this year and will play their first home game Thursday against the Edmonton Elks (0-2).

COVID-19 protocols will limit capacity to 12,500 fans and tickets were still available to the game as of Wednesday afternoon.

As owner, Doman plans to work behind the scenes to “get B.C. Place a little more noisy again” and work with the team in the community, but he said head coach and co-general manager Rick Campbell will remain the face of the team.

“To me, this isn’t about one season. This is about the next 25-30 years and rebuilding the brand,” he said. “There’s a lot of different factors that have to go in to get this going again. It won’t happen over night. But we’ve got a good start just getting fans back into the seats after COVID.”

Nick Arbuckle will finally make his first start for the Toronto Argonauts.

Head coach Ryan Dinwiddie announced Wednesday that Arbuckle will start the Argos’ home opener Saturday afternoon against Winnipeg. Veteran McLeod Bethel-Thompson was under centre for both of Toronto’s opening two games before giving way to Arbuckle in the third quarter of Friday night’s 20-7 road loss to the Blue Bombers.

“We felt like he got us going a little bit in the second half (last week),” Dinwiddie said “I’ve had a good history with Nick, I know we can win with him.

“I know we can win with Mac as well, we just felt that right now we’re going to go with Nick.”

Arbuckle came into the game with Toronto (1-1) trailing 10-0 and promptly marched the offence to its lone touchdown of the game, John White’s 30-yard scoring run. But that’s as close as the Argos got as Winnipeg (2-0), the defending Grey Cup champion, scored 10 fourth-quarter points to cement the win.

Arbuckle finished 10-of-19 passing for 96 yards with an interception versus Winnipeg. Bethel-Thompson completed 10-of-20 attempts for 70 yards.

Last week’s action was Arbuckle’s first since 2019 when he was with the Calgary Stampeders. That year, Arbuckle won four-of-seven games he started in place of injured starter Bo Levi Mitchell, completing 174-of-238 passes (73.1 per cent) for 2,103 yards and 11 touchdowns with just five interceptions.

Arbuckle, 27, signed with Toronto as a free agent earlier this year and dealt with a hamstring issue during training camp. But Arbuckle said Tuesday he’s been healthy since the start of the season.

Dinwiddie said all he’s looking for Arbuckle to do with the offence is string some drives together.

“We’ve had our moments but we haven’t had any real long drives since the first one of the season,” he said. “We’ve scored and done some good things, we had the one last week where we put Nick in and went downfield and scored.