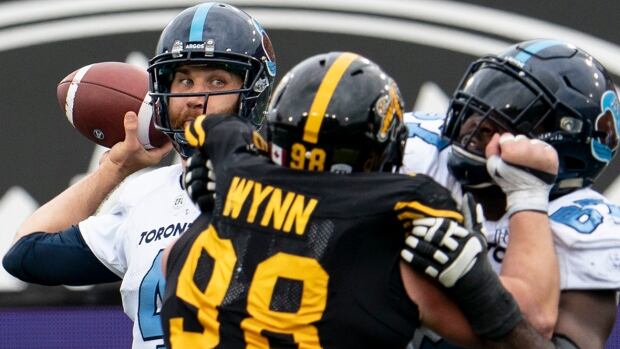 The Toronto Argonauts will have starter McLeod Bethel-Thompson for the CFL East Division final.

The veteran quarterback was on the field Sunday morning in preparation for the 12:30 p.m. ET game between the Argos and Hamilton Tiger-Cats at BMO Field.

That was a clear indication Bethel-Thompson had successfully completed the CFL-imposed quarantine.

Bethel-Thompson was among five Argos players who attended the Toronto Raptors’ home game Thursday, which violated the CFL’s COVID-19 protocols.

All five were sent home by the club Friday.

Linebacker Dexter McCoil Sr., and defensive back Jeff Richards, who were both listed to start Sunday, were also at the NBA game along with rush end Charleston Hughes and Canadian receiver Llevi Noel.

7-2 record as starter this season

McCoil and Richards also successfully completed CFL protocols and were scheduled to play Sunday. Hughes and Noel are both on Toronto’s injured list and won’t dress for the game.

Normally, the players would have to quarantine for four days and provide two negative tests before being able to resume team activities.

But on Friday, the CFL announced the five could return if they quarantined for 48 hours and provided three negative tests, the latest which was conducted Sunday.

Bethel-Thompson was set to make his CFL playoff debut after posting a 7-2 record as Toronto’s starter this season. Since 2014, quarterbacks making their first post-season start are just 1-4.

The winner of Sunday’s game advances to the Grey Cup game, which will be played next Sunday at Tim Hortons Field in Hamilton.

Toronto comes into the East final sporting a 6-1 home record and having won three of four meetings this season against Hamilton.