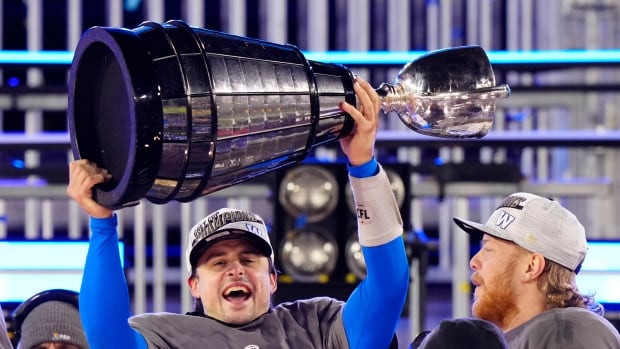 It’s fitting Zach Collaros signed a new contract with the Blue Bombers while celebrating a belated Christmas with family in his hometown.

The team’s star quarterback gave fans a gift by inking a one-year deal Thursday. He also received a contract widely reported to be worth $550,000.

“We did Christmas [Thursday] at my parents’ house for my niece, who’s 10 years old, and obviously for our two daughters, so my sister and her husband came over,” Collaros said Friday in a call with media from Steubenville, Ohio.

“We were already planning on having a dinner so that’s kind of how we celebrated.”

Last season’s CFL most outstanding player and Grey Cup most valuable player was asked if aiming to be the league’s highest-paid player was part of negotiations.

“There wasn’t talk of putting it into those terms,” Collaros said. “I can’t exactly tell you, but I don’t think we’re far off from what it was before the pandemic started.

“There wasn’t a ton of back and forth. There was never any true contention, I don’t think…. I thought it was a pretty easy process.”

The six-foot, 222-pound Collaros will return for a third season with Winnipeg and 10th in the CFL. He led the league last season in touchdown passes (20) and quarterback efficiency (111.0 rating) and finished second in passing yards (3,185).

The Bombers (11-3) won the championship trophy for a second straight season after a 33-25 overtime victory against the Hamilton Tiger-Cats at Tim Hortons Field. Winnipeg also defeated the Ticats 33-12 in the 2019 Grey Cup. The 2020 season was called off due to the COVID-19 pandemic and last season shortened to 14 games.

The 33-year-old Collaros is the first Bombers quarterback to guide the club to consecutive Grey Cup championships since Ken Ploen in 1961-62.

He could have become a free agent on Feb. 8, but said he didn’t think much about testing the market.

“Not really,” Collaros said. “I’m sure (Bombers general manager) Kyle (Walters) and everybody in the organization knew I wanted to be back.

“I love the group of people that are there — the support group, the coaches from the top down and obviously the guys in the locker room.”

News of his new contract came a few hours after the Bombers announced linebacker Adam Bighill was returning for another season. He was the league’s top defensive player last year.

There is some behind-the-scenes recruiting going on by players in a group chat, but Collaros said he tempers his pitch.

“I think that everybody understands that we all want each other to be back,” he said. “At the same time, I try not to put pressure on people.

“You have to do what’s best for your family. When there’s an opportunity to capitalize from a monetary standpoint, you know this game is so volatile, you have to do that.”

He did talk to Harris a bit on Thursday.

“I know Andrew’s a Winnipeg guy and I love that guy,” Collaros said. “I think our relationship is strong.

“I always tell him, ‘I can’t imagine being back here with anybody else but you,’ so obviously I hope he’s back. If Stanley re-signs, I’ll be the one breaking that news as well.”

The Bombers enter the season trying to win a third straight Grey Cup, a three-peat that’s never been accomplished in the club’s history.

“Something like that would be historic but, again, I think it’s just the day-to-day process,” Collaros said of the players’ collective focus.

He’s not sure how long he’ll keep playing, but said his body feels good and he loves the competition “so as long as we can ride it out.”

Winnipeg acquired Collaros from the Toronto Argonauts on Oct. 9, 2019, just prior to the CFL trade deadline. He had appeared in just one game that season before joining the Bombers. He suffered a concussion in the regular-season opener for Saskatchewan on the team’s first drive of the game. The Roughriders then traded him to Toronto in late July.

He led the Bombers to a 4-0 record in 2019, including the Grey Cup victory that ended the club’s 28-season championship drought. He’s now 17-2 overall in starts for Winnipeg.

Collaros began his CFL career with Toronto in 2012 and has appeared in 105 regular-season games with the Argos, Hamilton, Saskatchewan and Winnipeg. He has a 46-34 record as a starter and has thrown for 20,164 yards and 114 TDs with 58 interceptions.