When lifelong Winnipeg Blue Bombers fan Dave (Woody) Heywood made the decision to deck out his Honda Fit in blue and gold this past spring, he looked back some 37 years for inspiration. This time, however, he opted not to bust out his tool kit and methodically carve a giant hole in the roof.

It was way back in 1983 when a then-20-year-old Heywood transformed his two-door 1974 Toyota Corolla into a Bombers-themed hatchback. Aided by his childhood friend, Dave Sled, the makeover included a deep blue paint job, hand-painted team logos on the doors and a homemade ‘sunroof.’

A couple days after the 1984 Grey Cup win over the Hamilton Tiger-Cats, Heywood drove the makeshift convertible down to the championship parade with Sled in hopes of joining in the celebration.

“They actually let us into the parade.” Heywood said. “We were right at the back, but we were in it.”

After the Bombers’ Grey Gup win in Calgary last year, Heywood told his wife Diane if they ever got another car, he was going to paint up their Honda Fit.

This past spring the family did get a new car and Heywood and his daughter Mary sprang into action. They turned the compact car into a blue and gold machine complete with a homemade Grey Cup and the same Bombers helmet he had in the original car.

Heywood, a mail sorter at Canada Post, had been looking forward to driving the car to Bomber games this year. Even after the season was cancelled, he still cruised around Winnipeg and even led a fan-organized parade held late this summer.

“I just drove up [to IG Field] and the organizer told me to take the lead,” Heywood said. “That was pretty cool.” 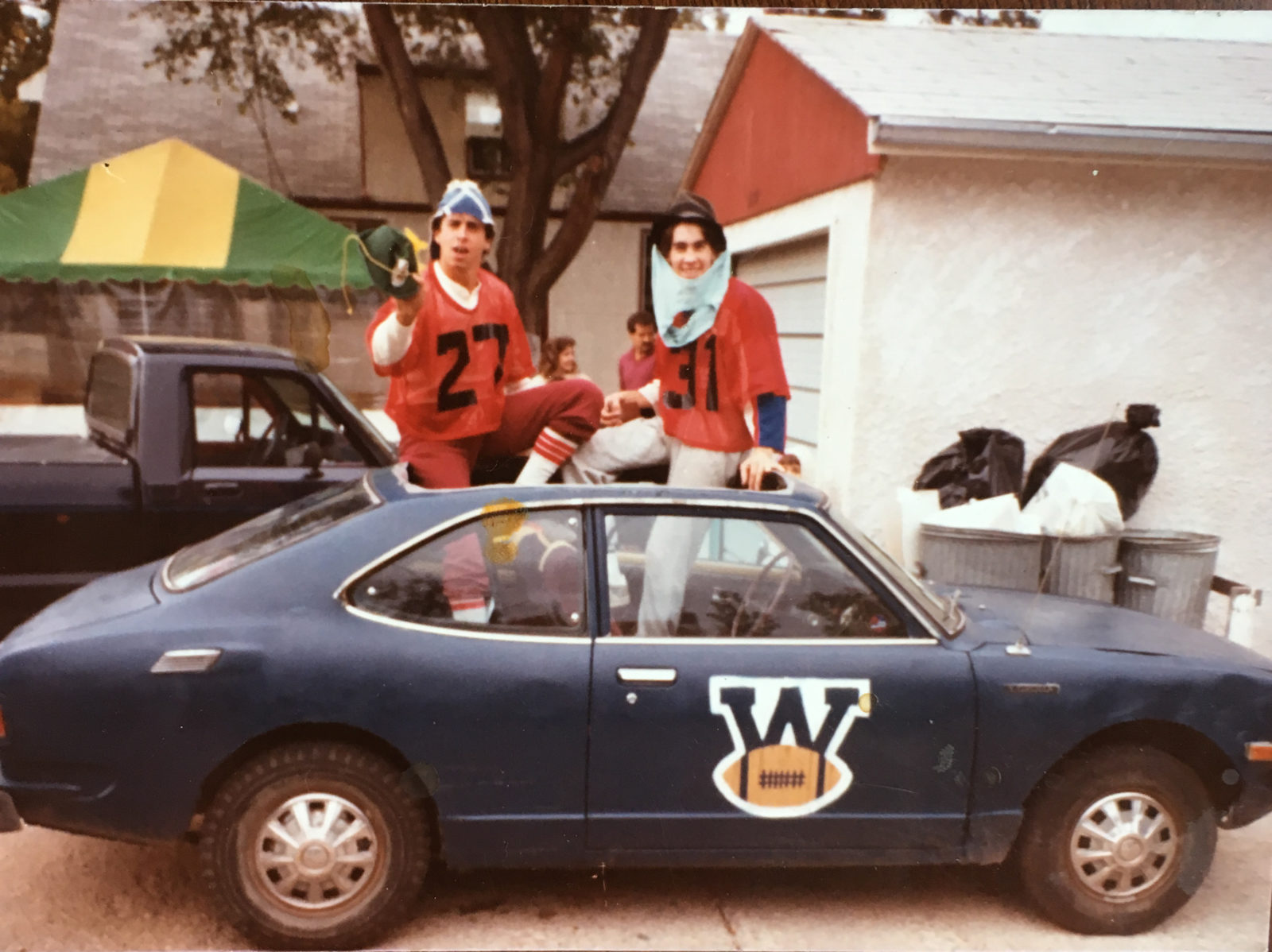 He was going to park the car for the winter, but decided he’d keep driving it around “to lift people’s spirits a little bit.”

Earlier this week, Heywood updated the car for the holiday season by hanging stockings along the passenger’s side and mounting Santa’s sleigh next to the old helmet.

After he was finished, Heywood posed for photos on the car’s roof in a pair of tight gold pants, a red Santa hat and – as a tribute to Chris Streveler at last year’s Grey Cup parade – a dark brown fur coat over his bare chest.

Anyone who has seen Heywood at a Bombers game wouldn’t blink an eye at his outfit. After all, he’s been dressing up (or, depending on the weather, down) for over 40 years.

Heywood is the last active member of ‘The Gotchmen’ – a cohort started by his older brother and his friends in the mid ‘70s. The group infamously wore nothing but their long underwear to Bombers games and were a fixture in the old stadium’s north end zone seats for decades.

“We’d get together before games, have some drinks and put our underwear on,” Heywood said of the group’s tradition.

He paid homage to the group by stencilling “Gotchmen” across the Honda Fit’s hood.

Heywood was the youngest of the bunch, and as time passed, he became “The Lone Gotchman” as the only one who still dressed up for games.

At 29, Heywood said he remembers thinking, “I can’t keep dressing up in my underwear when I’m 30.” 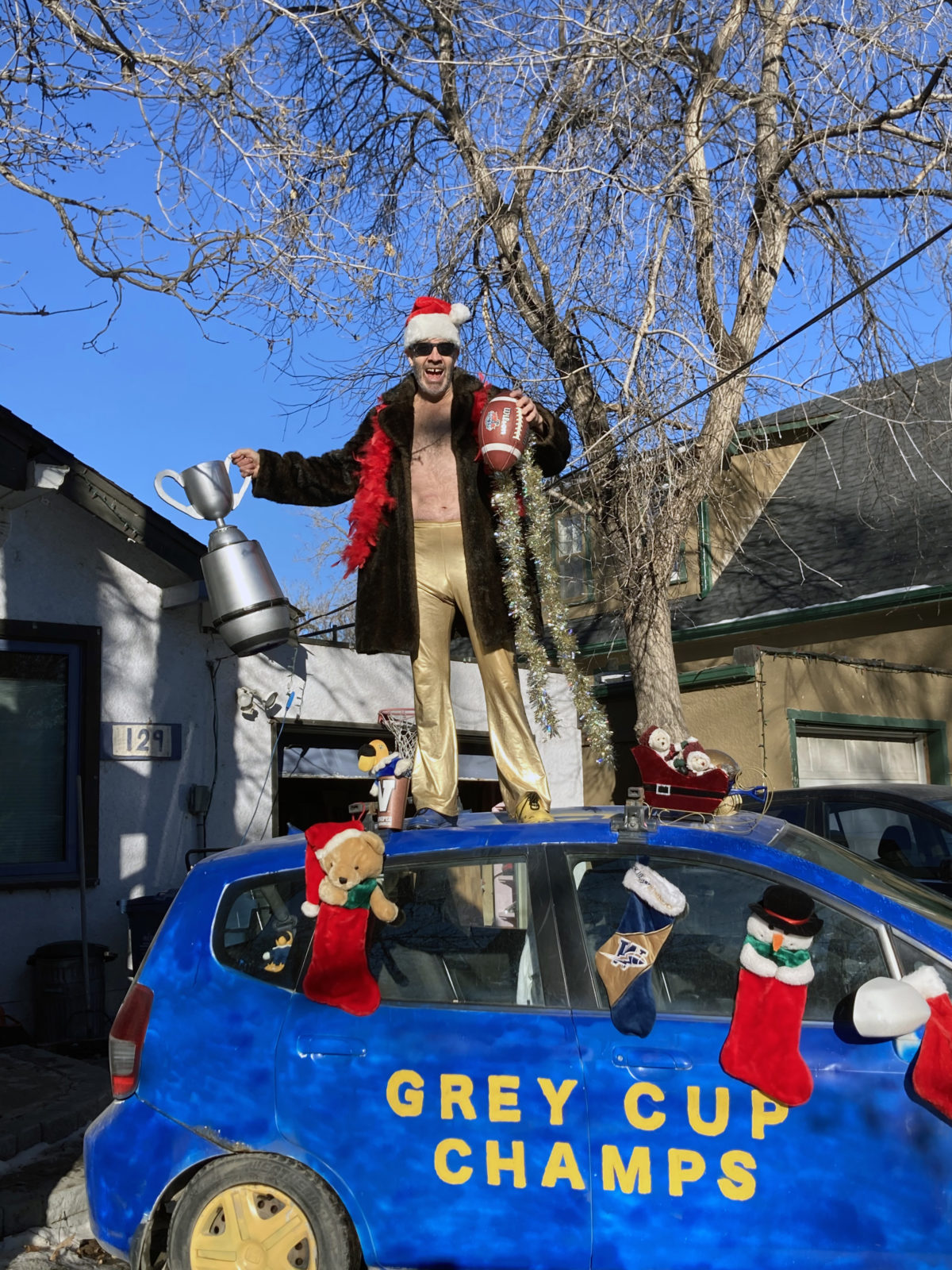 “And I said the same thing to myself at 40, too.” Heywood said – though his outfits have diversified over time from just a pair of Stanfield’s.

On any given game day, Heywood’s attire may include the aforementioned shiny gold pants, a custom-made blue and gold sportscoat, straw hat, suspenders, Halloween costumes and more.

He said people have referred to the collection of Rubbermaid bins full of costume pieces in his basement as his “tickle trunk” – a nod to ‘Mr. Dressup’, the legendary Canadian children’s entertainer.

“It’s all just become a big part of my life,” he said. “Everybody always wonders what I’m going to show up in.”

Not seeing the many, many friends Heywood has made at Bomber games over the years has been the toughest aspect of the cancelled season.

“I’ve met some of my really good friends because I just happen to sit by them,” he said. “It’s amazing how that brings you together.”

Heywood remains hopeful for football next season and the opportunity to drive the blue and gold car to a game. And, if history repeats itself, maybe he and Sled will find themselves driving in a Grey Cup parade through Winnipeg one more time.