It was after 5 a.m. Sunday morning, not long after the Winnipeg Blue Bombers’ charter had arrived back in Manitoba, and a bunch of sleepy-eyed players and coaches were heading to the parking lot. Just ahead of yours truly was safety Brandon Alexander, who walked with the sore-all-over gait of a man who desperately needed the R & R of this bye week as much as anyone.

Asked if he was OK, Alexander grinned and said: “Oh, I’ll be all right. And just know I’ll be good to go again on October 1st.”

The Bombers head into the first of their two bye weeks this season with the best record in the Canadian Football League and will remain in first place in the West Division even when they return to work for that Oct. 1st date in Vancouver against the B.C. Lions.

There were moments of absolute dominance in Saturday’s 37-22 win over the Edmonton Elks in the Alberta capital, especially early as the club scored on its first two possessions while forcing three punts and a fumble in their opponents first three drives. But even without quarterback Trevor Harris, this Elks team so many had predicted to top the West before the season began to punch back and took a 16-15 lead early in the second half.

And as we have seen so many times already this year, that’s when the Bombers defence put their collective hands around their opponent’s throat and began to squeeze the life out of them. Finding the end zone twice themselves – a Pick-6 by cornerback DeAundre Alford and a fumble recovery TD by Adam Bighill – the Bombers would out-score the Elks 22-6 in the final 27 minutes. 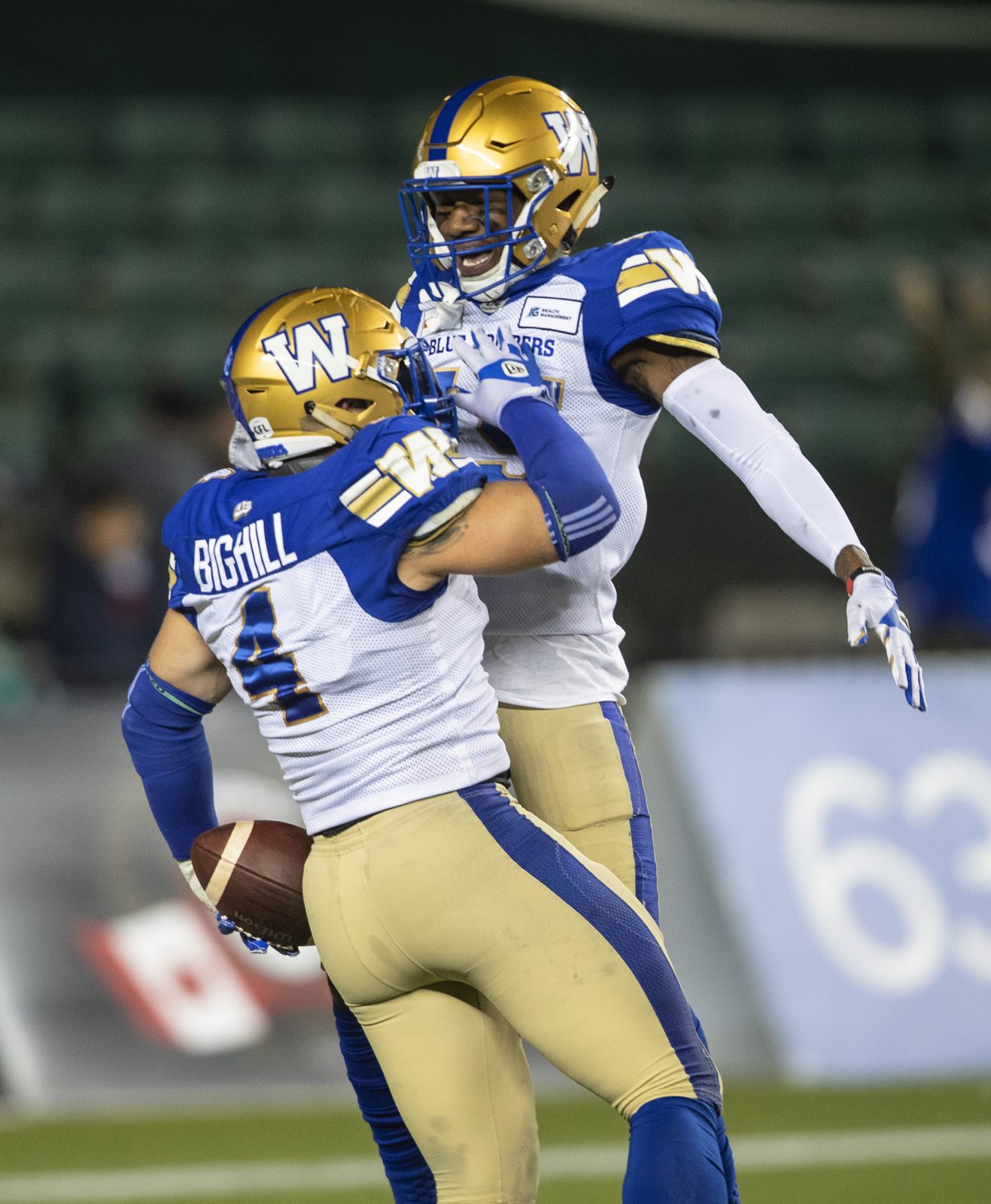 “We came out of the gates very quickly and then we did give them some life,” said Bombers head coach Mike O’Shea afterward. “There were a couple quarters in a row where it just didn’t feel great. But our defence managed to score, which is always fantastic. When they chip in points like that it tips the balance back in our favour. And then we took control near the end there. It certainly didn’t feel like a clean game for a couple quarters. But we’re not going to complain about it.

“I’m very happy for them, that we got the win, and proud of them that we’ve gotten this far. They really need and deserve a break and a mental rest from the game and the grind.” 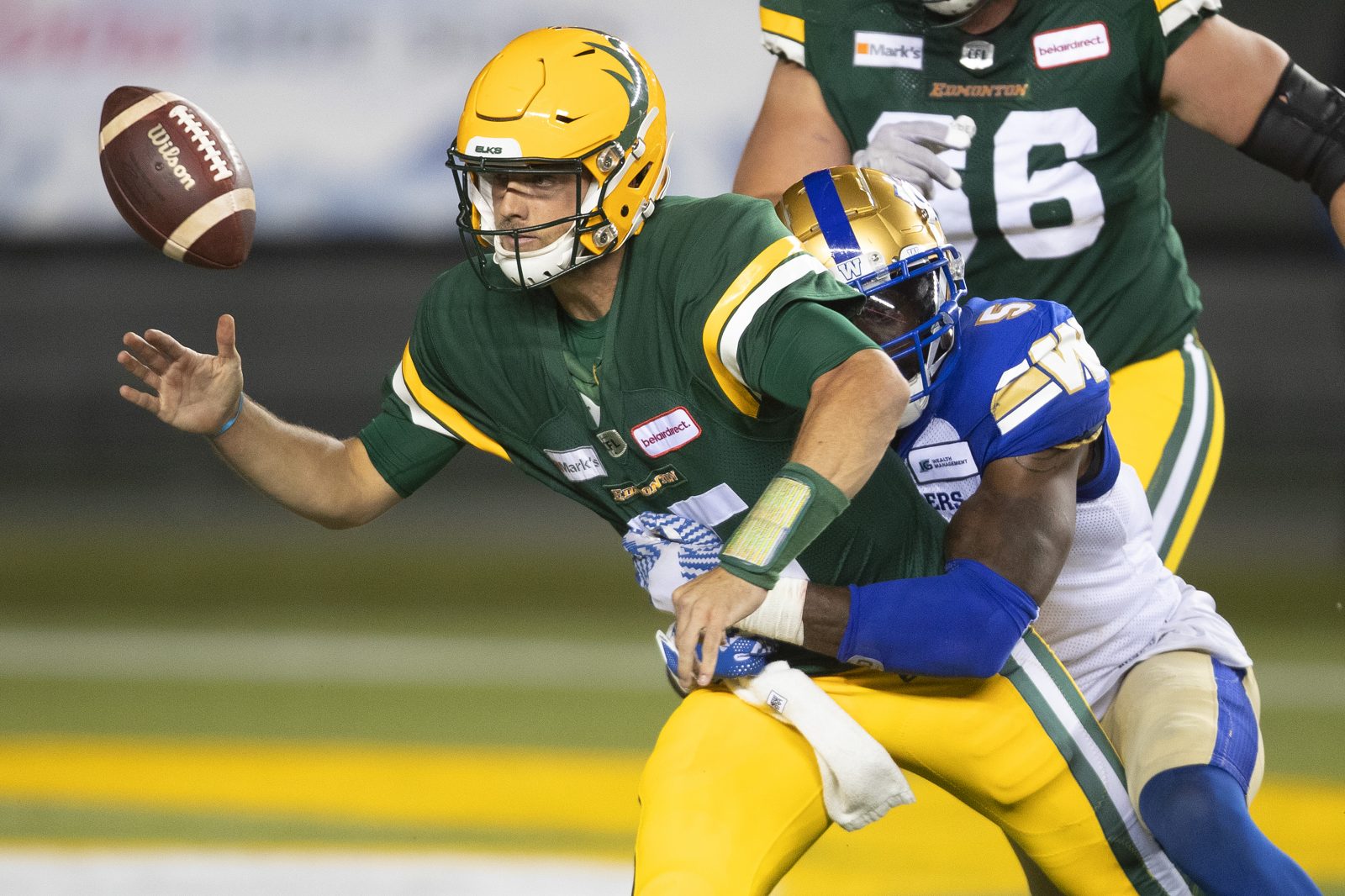 DEFENSIVE KINGPINS WILLIE JEFFERSON, ADAM BIGHILL, JACKSON JEFFCOAT… and Alexander have been getting a ton of love through the first half of the CFL season for their handiwork, and with good reason.

Still, it could also be said part of the reason the Bombers have been so stout defensively this year has been the play of their CFL rookies in defensive tackles Casey Sayles and Ricky Walker and especially defensive backs Deatrick Nichols and DeAundre Alford. Alford and Nichols were massive on Saturday, as the pair combined to pick off three Taylor Cornelius passes – two by Alford, including the Pick-6, the third by Nichols – in the final 20 minutes.

The two new faces in the secondary were under the microscope when the season opened, having the unenviable tasks of replacing CFL All-Star Winston Rose (Cincinnati) and West Division All-Star Marcus Sayles (B.C.). But with every snap they’ve been improving. Nichols is tied with B.C.’s Bo Lokombo for the league lead in interceptions with three; Alford is now right there behind him with his pair.

“I’ve been doing pretty good,” said Alford. “I just love getting my hands on the ball and tonight it happened twice. I’m just very blessed. I just want everybody to know who No. 45 is in the league. I’m young, but I’ve got a lot of vets that have been helping out, getting me up quick to the level of play. I just want to let everyone know I’m here for a long time and I want to go down as one of the best boundary corners in the league.”

Alford’s TD interception was evidence of his ball skills, but also his homework. He said previous film study told him that Elks receiver Derel Walker ran a specific route when he was tight to the yardage numbers on the field. He read that and Cornelius looking that way before jumping the pass and returning it 20 yards for a TD that wiped out the Elks lead.

“He’s a sponge,” said O’Shea. “He’s learning and he’s humble. He knows he has to keep learning and I do think even in games that pick’s not an accident. It’s him understanding and believing and trusting himself and believing his eyes and film study.

“I do think he knew he was going to get one today. Through the early part of the game I thought he had his eyes on one. A lot of effort through practice week and film study goes into that to make that interception. It isn’t just a good break.” 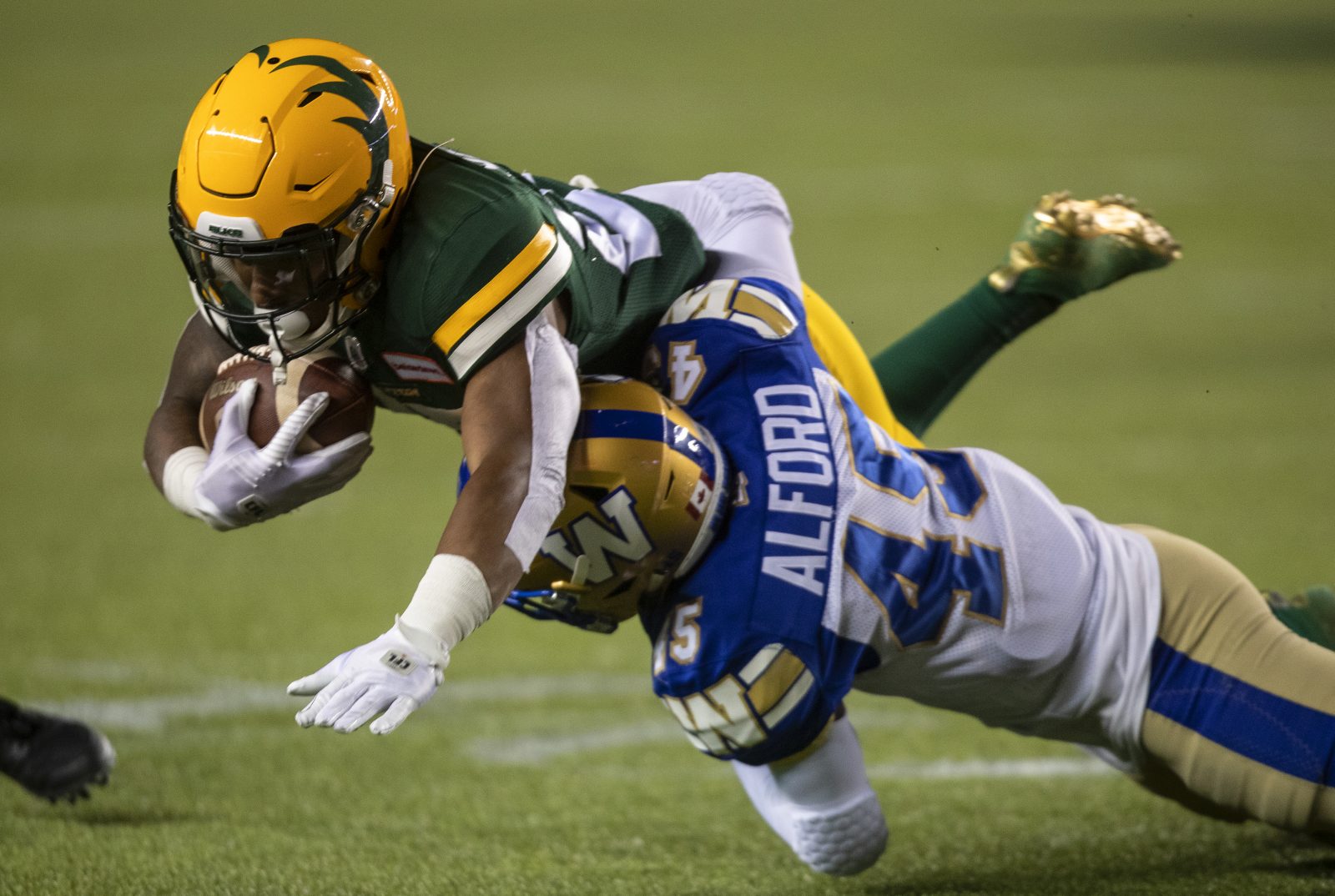 ONE MORE ON ALFORD… prior to this condensed season, O’Shea stressed the importance of veterans in what was going to be/still is an unprecedented campaign. Those veterans – guys like Alexander, Nick Taylor and Mike Jones – have been critical as part of a secondary and a defence that has allowed only two passing touchdowns against through the first half of the season. They’ve also been massive in the rapid learning curve of Nichols and Alford.

“I feel very comfortable,” Alford said. “I’ve got guys in the secondary, Brandon Alexander, Nick Taylor, Mike Jones and also Deatrick Nichols and we watch film together, we watch extra film, stay out after practice and just talk. We’ve got a real good friendship. They’ve played a big part in my success so far. I’ve just got to keep getting better and we’re going to keep getting better as a unit. It’s ‘For the ‘W’ and doing everything for the win.”

THE BOMBERS REACH THE MIDWAY POINT NOT WITHOUT… their question marks, the biggest being the placekicking situation.

Ali Mourtada was 0-for-3 in field goal attempts on Saturday, missing from 28, 51 and 44 yards. And while he did go 4-of-4 in convert attempts, his troubles only picked further at an open wound that has been festering all season for the Bombers. Winnipeg’s field goal percentage is now just 50 percent, as Mourtada (0-3), Marc Liegghio (5-8) an Tyler Crapigna (3-5) are a combined 8-of-16. Liegghio was also just 5-of-8 in convert attempts before Mourtada replaced him.

O’Shea did say that he would stick with Mourtada after the game saying he had a strong leg and that ‘his process was clean.’

AND, FINALLY… Another tip of the hat to Andrew Harris, who moved past Kelvin Anderson into sixth spot on the CFL’s all-time rushing list. Harris is now at 9,341 yards. Bomber hall of famer Charles Roberts, FYI, is at No. 5 on the all-time list at 10,285 yards.

“It’s definitely something I’m proud of,” said Harris. “Again, it’s not a one-man show. It’s a credit to my coaches and my teammates along the way. It’s a lot of hard work and dedication and staying healthy. I’m definitely a little beat up right now, I’m not going to lie, so I’m going to enjoy this bye week and take it all in and spend some time with family and friends. I’m looking forward to getting back and doing what I do best.”