It was a month ago – October 23, to be exact – when the Winnipeg Blue Bombers clinched first place in the Canadian Football League’s West Division. The accomplishment came in a 45-0 win over the B.C. Lions and secured homefield advantage for the Western Final, which will be held on December 5th at IG Field.

All of that is hardly a newsflash and more of a quick refresher.

Still, rewind to that night and the goal for the Bombers from that moment going forward with three regular season games remaining was to keep the foot on the gas and make sure the lineup was as healthy as possible for the divisional final with a berth in the 108th Grey Cup on the line. That’s important to remember in the wake of the last two weeks – losses in Montreal and Calgary – in which Most Outstanding Player front-runner Zach Collaros was rested for one game and played less than a half in another, dominant defensive end Jackson Jeffcoat was rested for both along with defensive back Deatrick Nichols and ace return man Janarion Grant was also absent from the lineup.

And so, no, entering the playoffs on two straight losses is not a good thing, especially if you think negative momentum can somehow last 15 days from what happened in Calgary on Saturday to the game that really matters on December 5th. But as Bombers head coach Mike O’Shea said in the aftermath on Saturday, whether the club finished 12-2 or 11-3 will matter little when the ball is put on the tee in a couple of weeks. 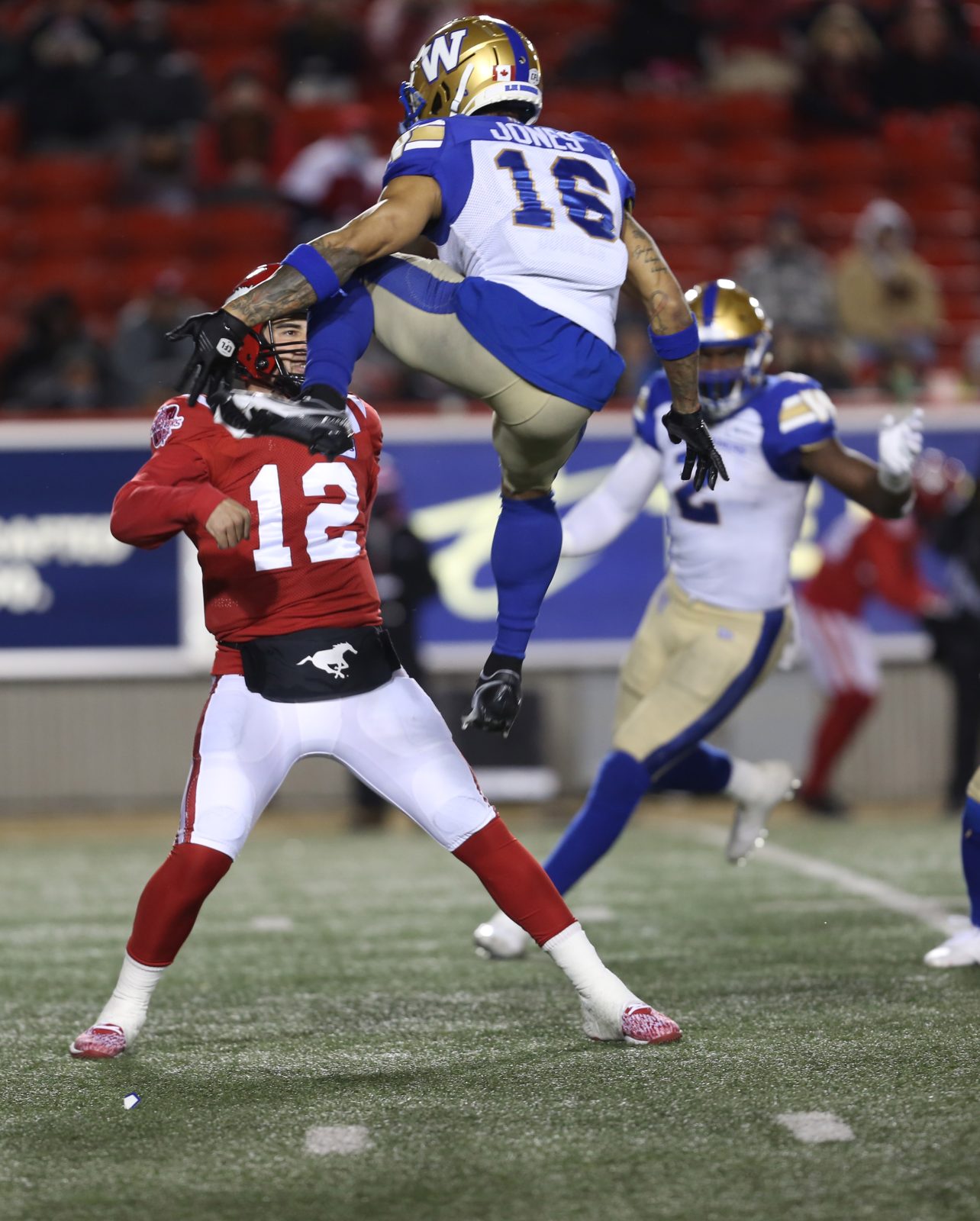 All of which explains, in part, why there were no signs of panic or concern as the Bombers packed up and chartered home late Saturday/early Sunday. This is a squad dominated by a talented veteran leadership group which will push this team in the days ahead of the final.

Collaros got some work Saturday and is healthy. And aside of the uncertainty around safety Brandon Alexander, who was injured on a punt-cover and did not return – although he did walk off on his own – and the lingering questions about the availability of Andrew Harris, who has yet to return to practice, the Bombers essentially escaped this ‘meaningless’ three-game jog through to the end of the regular season relatively healthy. The answer to the momentum narrative, meanwhile, won’t officially come until the Bombers face the winner of the Stamps-Saskatchewan Roughriders Western Semi-final this Sunday in Regina.

“Obviously, we wish we could have had that momentum… I mean, everyone probably dreams of a perfect season,” said running back Johnny Augustine, who was sensational in the loss to the Stampeders with 148 yards rushing. “But the reality is the margin of error is very small. From this we’re only going to get better. Momentum or not we’ve just got to learn from our mistakes and continue to keep going. We know what our eyes are set on when it’s all said and done.” 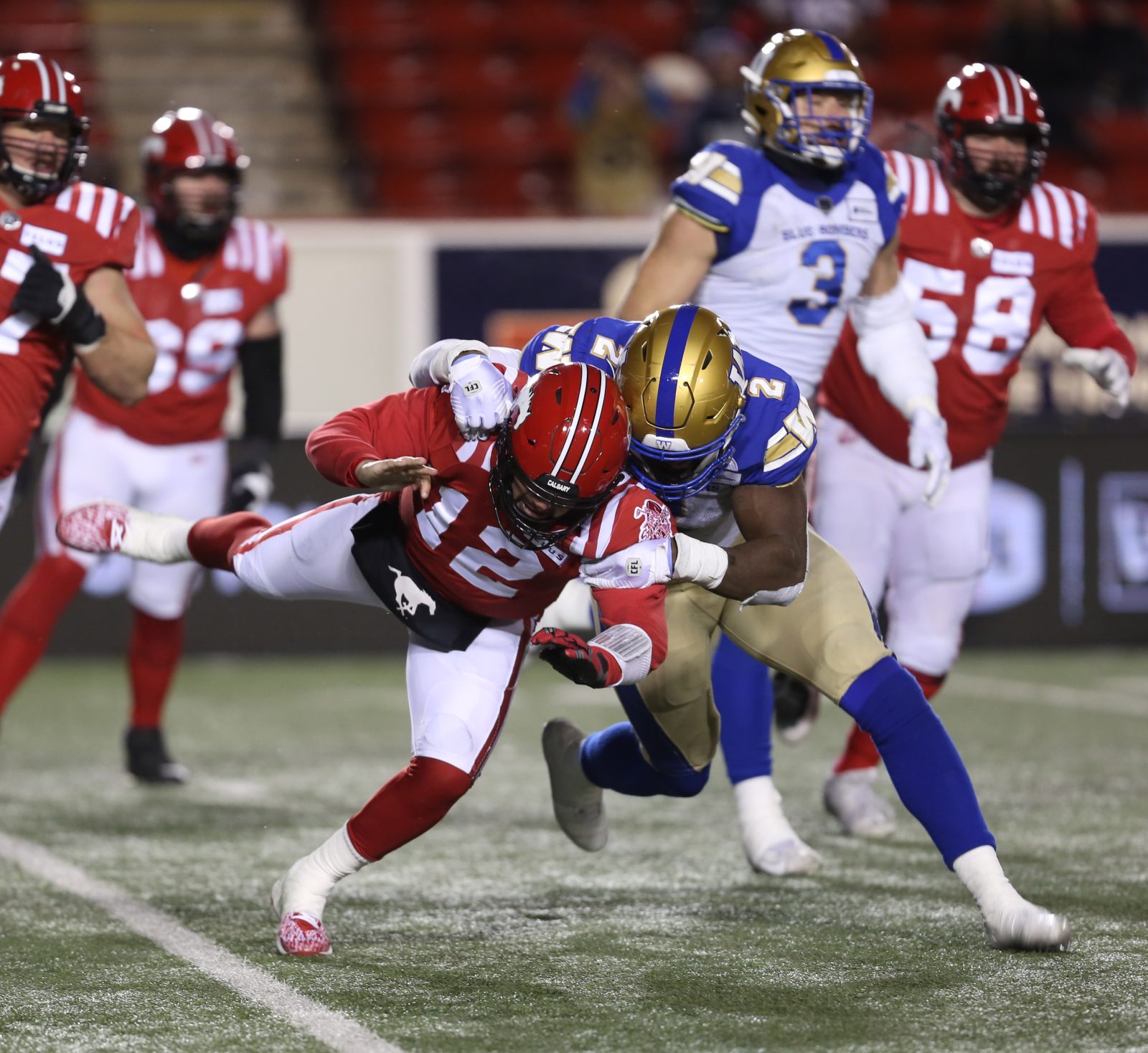 LET’S GO BACK AND LOOK AT THAT FOURTH QUARTER… from Saturday night before we press on from a game that had no impact on either team in the standings.

The Bombers held a 12-0 lead in the fourth, with Calgary not having even crossed into the Winnipeg side of the field until there were six minutes remaining in the contest. Credit the Stamps for their late rally, but it’s also worth noting that the fourth-quarter meltdown came with Willie Jefferson and Adam Bighill on the bench, with Alexander out of the game due to injury and with Jeffcoat and Nichols back home in Manitoba. That’s more than one-third of your defensive starters not in the game.

Even with that, O’Shea admonished himself afterward for getting into defensive coordinator Richie Hall’s way late in the game by asking for more pressure – which the Stamps exploited – while dime back Alden Darby was also jumping on a sword afterward.

“We executed what we wanted to execute for most of the entire game until the last couple drives,” said Darby. “We’ve just got to stay focused. We’ve got to hit our targets stay locked in for the whole fourth quarter until the clock shows zero.

“We’ll look at the film… but I know for myself, personally, I feel like I lost us the game. My team counts on me to do my job and to make certain plays and I hold myself to a very, very high standard. My preparation and the way I hold myself accountable for things… whether it’s one catch or two catches, I don’t believe that I should give up much, especially at the end of the game. I was in a certain coverage and I guessed wrong and gave up a catch and, in my opinion, I lost the game… That’s my fault. I don’t care how many plays I made throughout the game or what I did or didn’t do, that play right there I felt like I lost us the game and it hurts.” 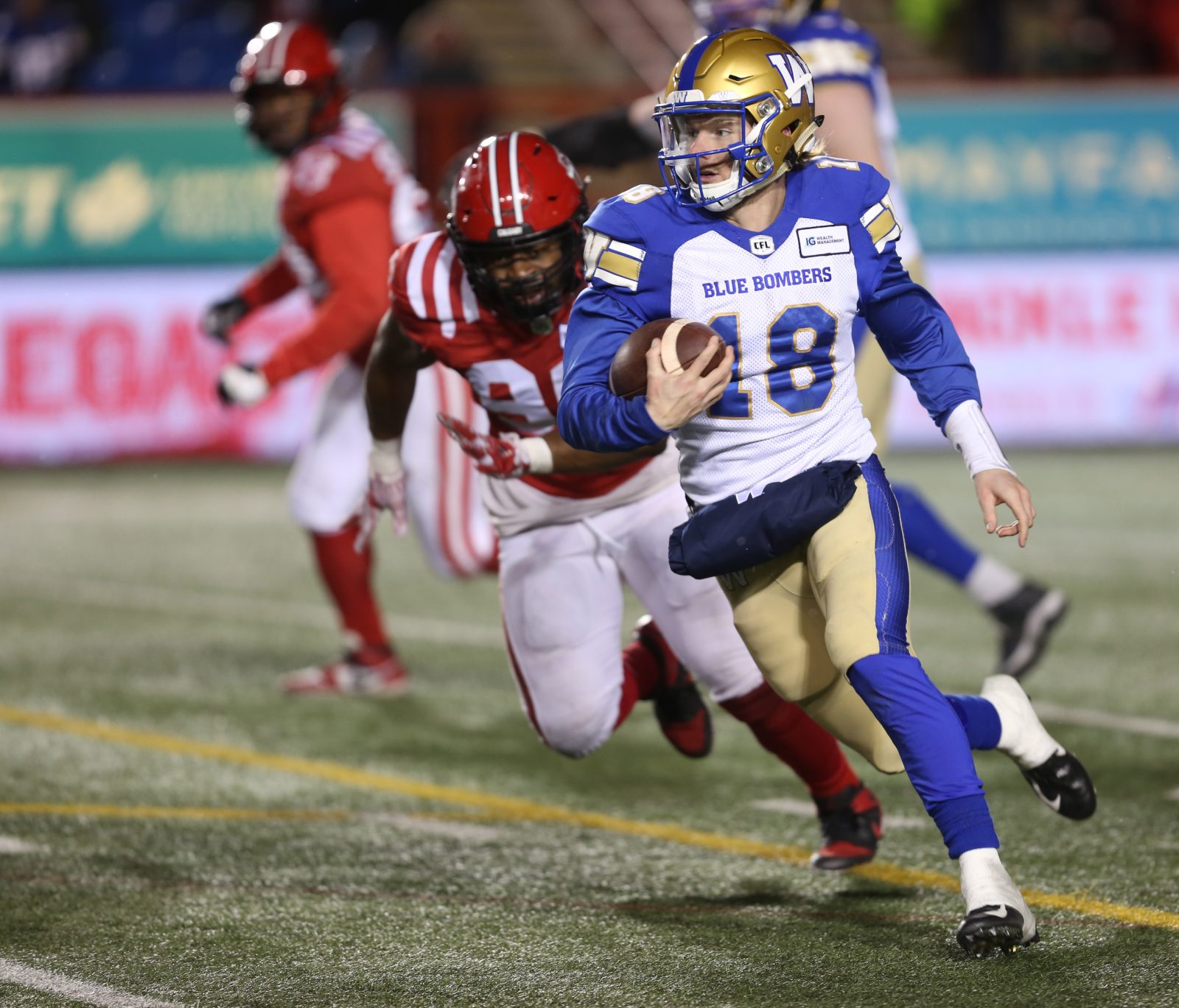 THE 13 POINTS SURRENDERED… in the last five minutes prevented the Bombers from establishing a new CFL record for fewest points in a quarter. As it stands, Winnipeg out-scored its opponents in the final 15 minutes this year by a massive margin: 123-30.

“We just play football, we don’t really look at statistics,” said Darby. “We don’t really highlight those things. I don’t know what our number is, honestly and truthfully. We just go out there and expect and do our best to play Winnipeg football every play, all four quarters.

“We have a recipe up here. We’ve all got the ‘W’ on our helmet and we all expect to play Winnipeg Blue Bombers football. That’s going to definitely sting. We’ve got to make sure that we address it and get it fixed because that’s the finish right there. The fourth quarter is the finish, that’s playoff football, that’s West Final football. We’ve got to finish, so of course we’re going to talk about it and make sure we get it corrected.”

THE BOMBERS GOT THEIR SNAPS FOR COLLAROS… and then had Dru Brown take over in the second quarter. He fumbled near the goal-line that took points off the board and finished the night 7-of-14 for 49 yards with no touchdowns and no interceptions while rushing seven times for 44 yards.

“I’m sure like every quarterback starting their first game they want some plays back,” O’Shea said. “He might have had a little trouble with the handle on the ball earlier on, with some of the throws. It didn’t look like it was coming out clean. After that I thought he corrected it and I thought he did alright.” 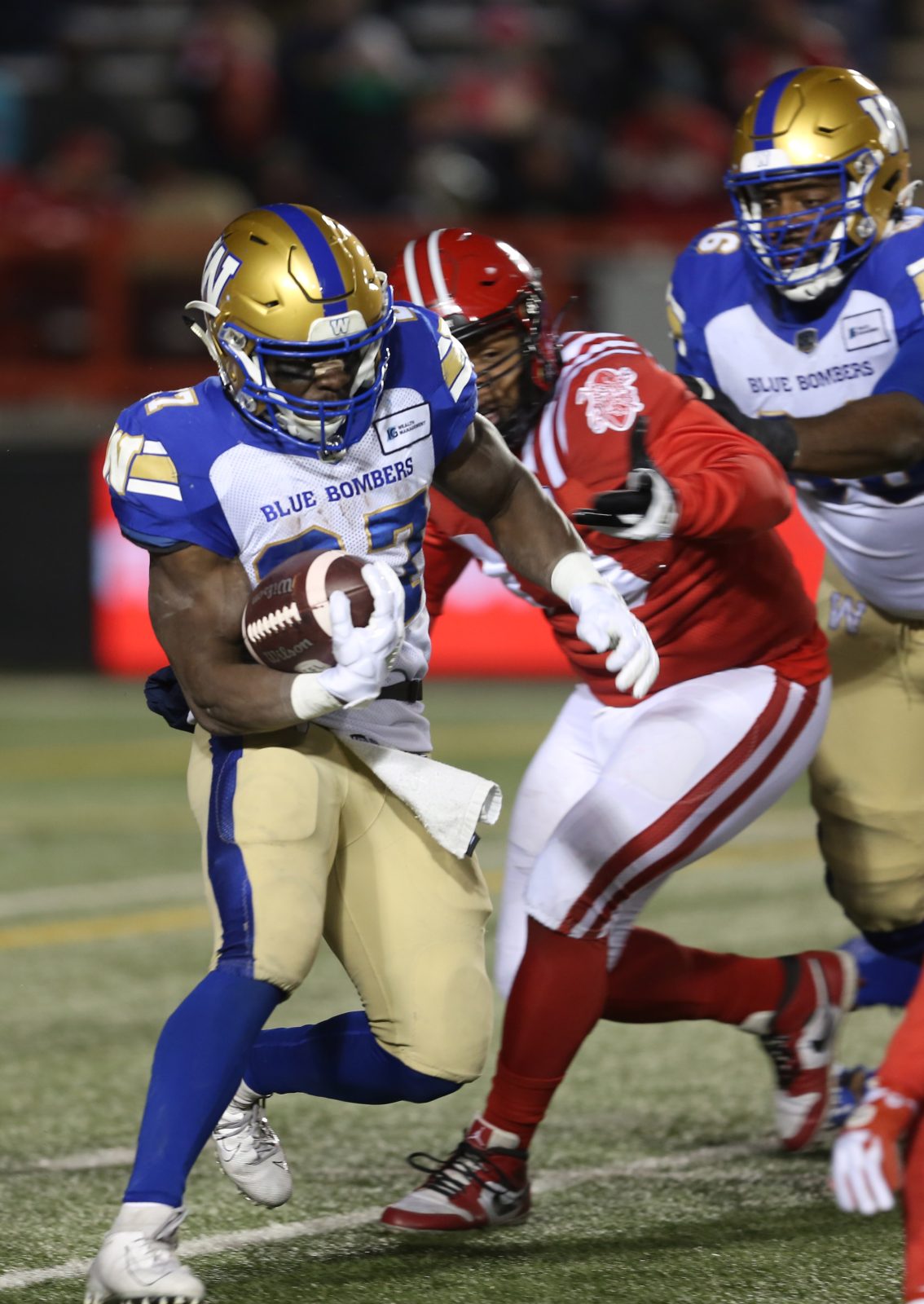 SOME COOL NUMBERS THAT CAME FROM AUGUSTINE’S… spectacular night’s work. In rushing for over 100 yards the Bombers ended this shortened season with three different tailbacks eclipsing the 100-yard mark in at least one game this year: Brady Oliveira had two, with Augustine and Harris each having one each.

The last time the Bombers had three different running backs post 100-yard rushing games in a single season was 2008 with Charles Roberts, Fred Reid and Joe Smith – the man the club acquired from B.C. after dealing Roberts to the West coast. The Bombes also had three different backs rush for 100 yards in a game in one season in both 1975 (Jim Washington, Steve Beaird and Richard Crump) and 1976 (Washington, Beaird and Crump) with the club record being four, set in 1960, and led by Leo Lewis.

What’s especially cool about this year’s accomplishment is all three of the Bombers running backs are Canadian.

One more, while we’re on the topic of the Bombers Canadian ground force: Harris finished fifth in the CFL in rushing with 623 yards despite missing half the season, Oliveira finished ninth with 429 yards and Augustine finished 16th with 285 yards. Those three backs combined for 1,337 yards in 14 games.

AND, FINALLY… a tip of the hat to some Bombers who posted some gaudy individual statistical totals in the condensed ’21 season.