There was an air of obvious frustration and disappointment as the Winnipeg Blue Bombers scrambled to clear out of the visitors dressing room at BMO Field early Saturday evening. Let’s face it, that’s the reaction you would expect after any defeat, and especially after the Bombers had cranked out six straight wins dating back to the end of 2019 and their Grey Cup championship.

But following the 30-23 loss to the Toronto Argonauts there was also a collective ‘we’re better than this’ resolve that was akin to a heavyweight champion being dropped with a punch and then vowing to get back to the gym to make corrections. So now the work begins in earnest for the Bombers in the wake of a loss in which the Boatmen were full credit for their result. And good teams not only make the necessary adjustments after a win, but also do the serious self-examination to determine where they might be vulnerable.

That’s what will make the coming days so intriguing for the Bombers as they prepare to host the Calgary Stampeders in a rare summer Sunday evening contest at IG Field.

The evaluation will again include the Bombers work at the line of scrimmage. Winnipeg gave up 149 yards rushing while generating just 32 yards of their own along the ground. The Bombers did have four sacks to Toronto’s one, but struggled mightily in second down conversions, going just six-for-18 (33 percent). That led to the most alarming number of all, as the Argos held the ball for 39 minutes and 46 seconds to Winnipeg’s 20:14.

“They came out ready to go and were fired up for their first home game in a long time,” said Bombers guard Pat Neufeld of the Argos. “But we want to focus on ourselves and we’re going to find ways to get better, we’re going to watch the film and be super-critical of ourselves for our effort and physicality and technique… everything as an offensive line and as an offence. We just know we’ve got to be better, especially in the first half to stay on the field and sustain drives.”

The Bombers were also nailed for eight penalties for 80 yards, compared to Toronto’s three for 40 yards. Of those eight infractions, four were for offside or illegal procedure, two were on special teams, one was a 24-yard pass interference call and two more were rough-play penalties on the defence. 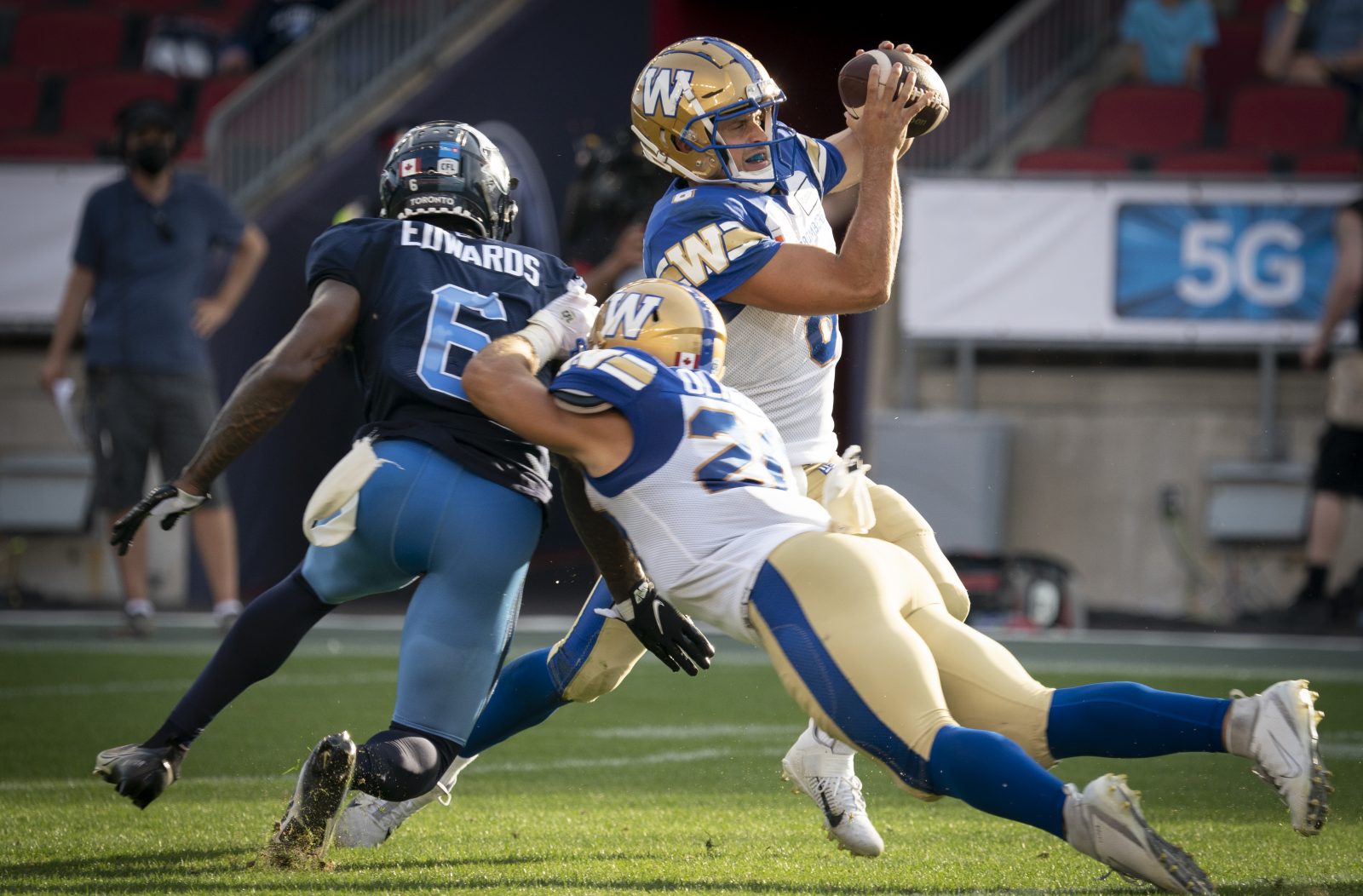 ONE OF THE MOST-TALKED ABOUT SIDE STORIES TO THE GAME… was a heavy hit by Bombers safety Brandon Alexander on Argos receiver DaVaris Daniels early in the second half that dislodged his helmet and left him on the ground and seemingly suffering from a concussion.

Initially there was no flag thrown on the play, but as Daniels was tended to by Argos trainers the CFL Command Centre reviewed the hit and assessed a 15-yard unnecessary roughness penalty.

“I saw the quarterback put him in a situation where I had no choice but to hit him in his body area,” explained Alexander after the game. “I targeted where I needed to… I hit him pretty hard, but I didn’t hit him in the head or anything. It’s just a football play in my opinion. I made sure he was OK. Obviously I’m not out there trying to hurt anybody, but I play physical.”

Several Argos players tried to get into Alexander’s face after the hit, but he raised his arms and kept them up in an effort to stay away from any kind of post-whistle skirmish.

“The refs came to me and told me it was a clean hit. I knew that it was a clean hit. I’m pretty sure because of how the hit was and the results of it afterward probably drew the flag. But, like I said, I come out here and play football and I’m a physical player. I’ve been here four years now and I’ve never once had a dirty play or anything like that. I just come out here and play physical. That’s it. I’m not going to change the way I play. I’ll come out there and be as physical as possible and be as safe as possible.” 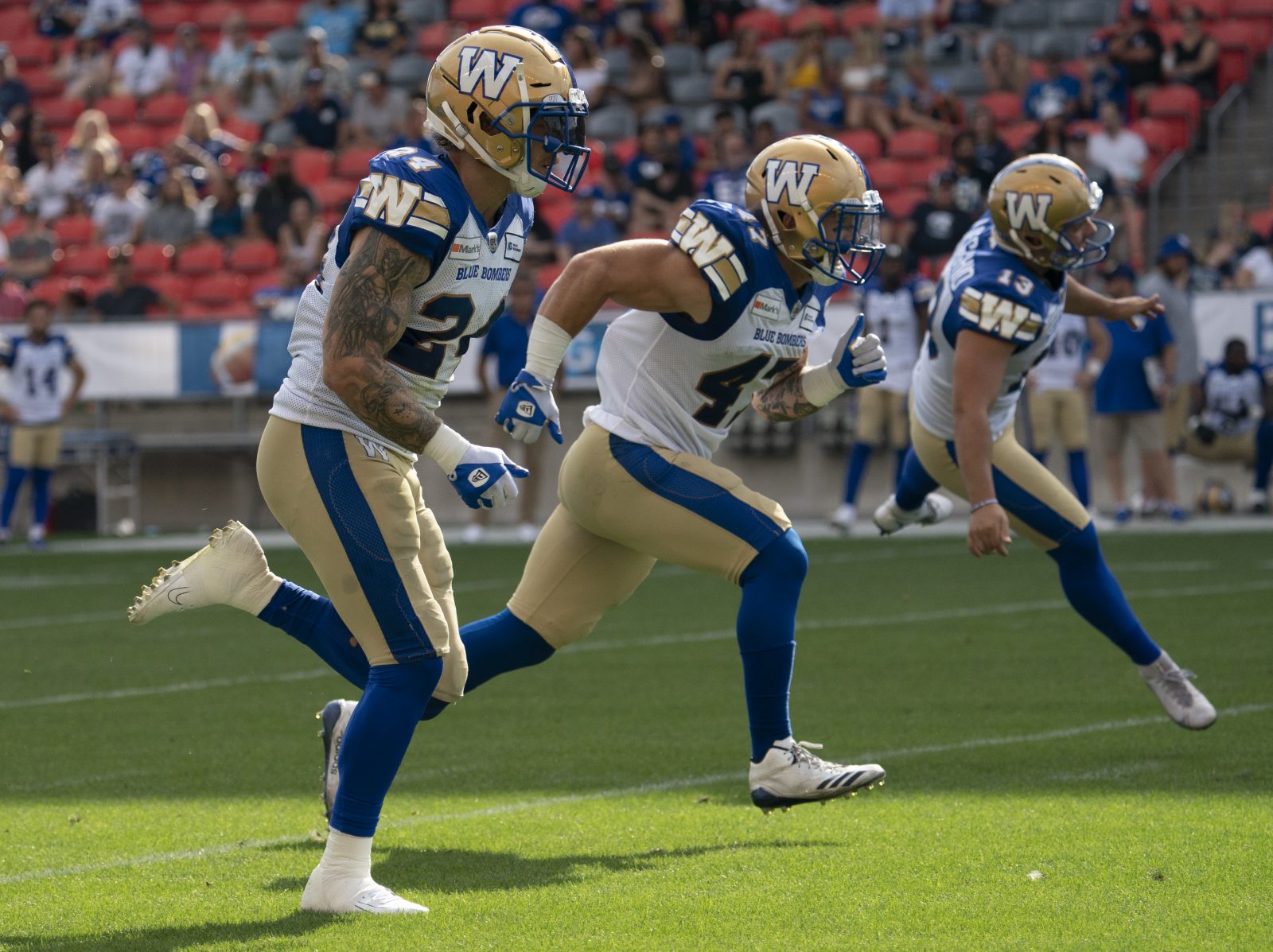 TWO THUMBS UP – WAY UP – FOR MIKE MILLER… on becoming the Canadian Football League’s all-time special-teams tackles leader on Saturday.

Miller, a 10-year-veteran with Edmonton and Winnipeg, registered three special-teams tackles against the Argos to give him 192 in his career and allowed him to move past former B.C. Lion Jason Arakgi, who had 190, on the all-time list.

“I remember when Jason broke it. He was an unreal player that when I came into the league in 2011 he was a guy you had a lot of respect for and was a great competitor and really good at his craft,” said Miller.

“I don’t know if I ever really thought I would break it. I knew going into this game there was an opportunity, but special-teams tackles are not the easiest thing to come by, so if it happened, it happened.

“I have to thank all my teammates since 2011, all the guys that grinded it out with me on special teams. I mean, too many names to thank… all those guys who have put in just as much time and effort as I have. I’m so thankful for all my teammates that I’ve been fortunate to play with. I’ve played with some great players and some really great special-teams players as well.”

Miller first cracked the Edmonton lineup in 2011 as an undrafted player out of Acadia and morphed into one of the most-respected men in the entire CFL. In 2019 he was named the Bombers Most Outstanding Canadian and Most Outstanding Special Teams Player.

“Undrafted… drafted… I never put too much weight into that,” he said. “I went in my rookie year just trying to make the team and just try to contribute wherever I needed to contribute and that happened to be special teams. That’s where my role has continued to be for the last 10 years. I’m just focussed on playing my part and doing what the team needs me to do.”

EVEN AS COACH O’SHEA WAS REPLAYING THE GAME… in his head in the immediate aftermath on Saturday, he did take time to offer this on Miller:

“It will be (a special moment) for the team when we get to digest it and it will be for Mike Miller when he decides to think about it sometime later in life, I imagine. I imagine if you asked him right now I know what he’s going to say, but that shouldn’t diminish the fact he’s been playing at such a high level in an extremely-important facet of our beautiful Canadian game.

“He’s the best all-time, so… he’s not a prideful guy. He’s not going to dwell on this, but he should be happy about it.”

We mentioned this in our Game Preview on Saturday, but it bears repeating. The CFL’s all-time special-teams tackles list has a serious Blue Bomber flavour to it.

Third on that list is current Bombers President and CEO Wade Miller (185), tied for fourth are Brendan Rogers – a fourth-round pick of the club in ’91 – along with Sean Millington, who played here in 1998 (bth at 176) while O’Shea himself is eighth overall (169). 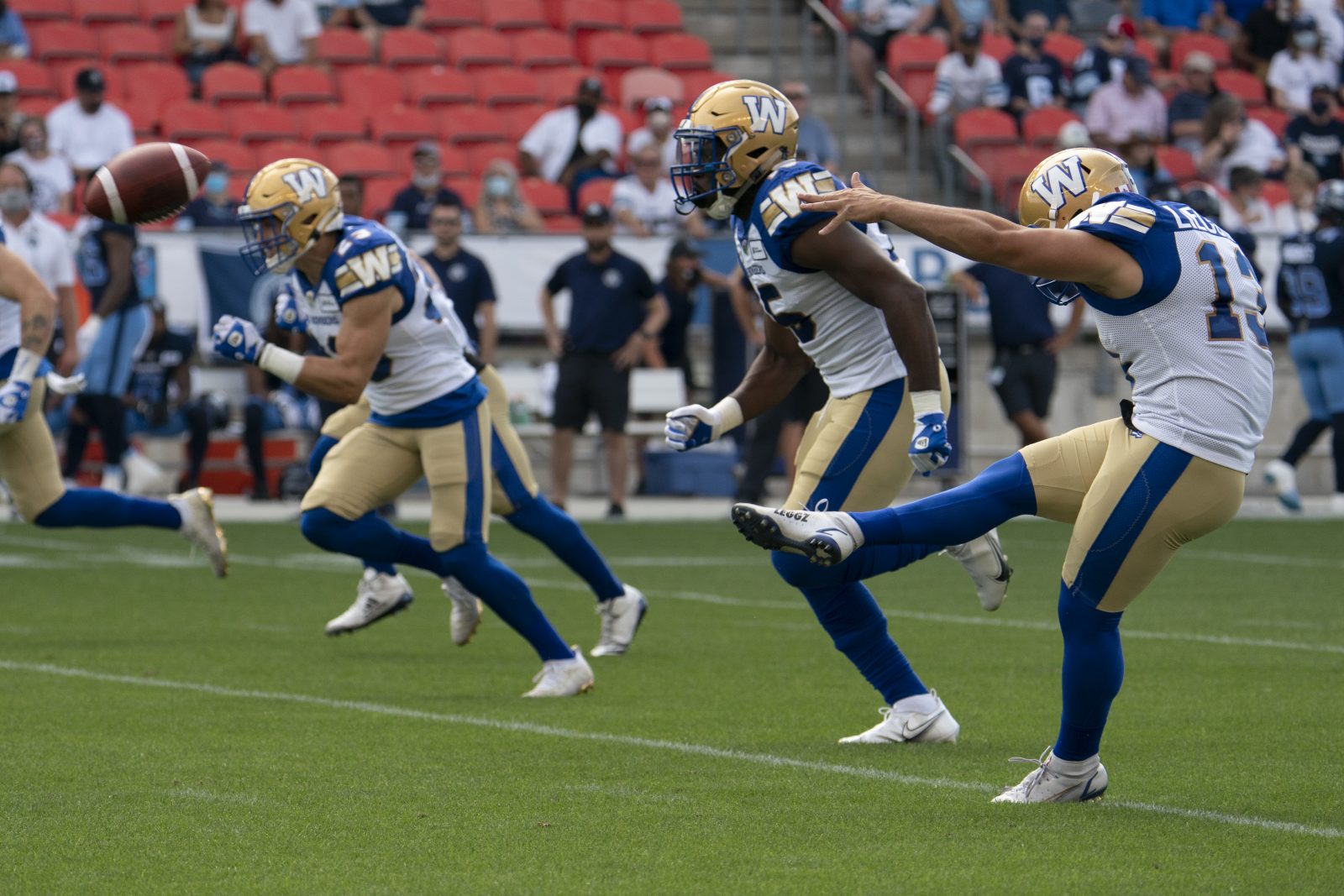 THE BOMBERS GROUND GAME… has ground to a halt in the last two games with just 85 yards rushing combined – 32 on Saturday and 53 in the 20-7 victory over Toronto in Winnipeg.

“They had a solid game plan and were coached up well to attack the things we do well,” said Neufeld. “We’ve just got to do the little things better. We’ve got to be able to anticipate them doing all the movement stuff that they do up front and having guys swooping in and out of the box. We’ve just got to trust our eyes more and find a way to be physical when they’re moving a lot.”

Asked if the inability to establish the run game led to some of the offensive struggles, O’Shea said:

“We won last week and I don’t know if we established a run game, so… As Buck (Pierce, offensive coordinator) talked about quite early on we’re going to be offensively whatever it’s going to take to win, that’s what we’re going to try and do. We tried, we just didn’t get to it.”

THE LAST WORD GOES TO… Brandon Alexander, who summed up the mood in the room after the loss and, likely, the mood leading up to next week’s game vs. the Stamps:

“You can kind of tell in our demeanour right now… we’re upset about that. We laid an egg on our side. We can’t do nothing about it now except go back and watch film and correct a couple things. We all left a lot of plays out there, myself included.”