It was early Saturday evening, not long after the Winnipeg Blue Bombers had put the finishing touches on a dominant win over the Saskatchewan Roughriders in the Banjo Bowl, when Adam Bighill took to the podium to offer up his thoughts.

He would be followed in media Zoom calls by Nic Demski, Willie Jefferson, Zach Collaros and head coach Mike O’Shea. And, in turn, they all more or less delivered the same message – this Bombers team may be 5-1, but they left some things out there that could have made the result even more lopsided than 33-9. And the post-game tone adeptly straddled that fine line between bravado and cocky in a perfect representation of what a defending champion should look, sound and act like.

“We came out here and did what we’re supposed to do,” Bighill began. “We turned it up in the second half the way we needed to. We responded really well and made some adjustments. We finally started to put it together on all three phases. That’s what we wanted to see and we know we can grow from here.

The post-game tone was more matter-of-fact than it was about boasting. Even at 5-1 and sporting the best record in the CFL, a stifling defence which has surrendered just 76 points in six games and offence that finds another gear with each outing, there are some issues in the kicking and return game. And there is a head coach pushing this ‘pride can be dangerous’ narrative that he first trotted out after the Labour Day Classic win. 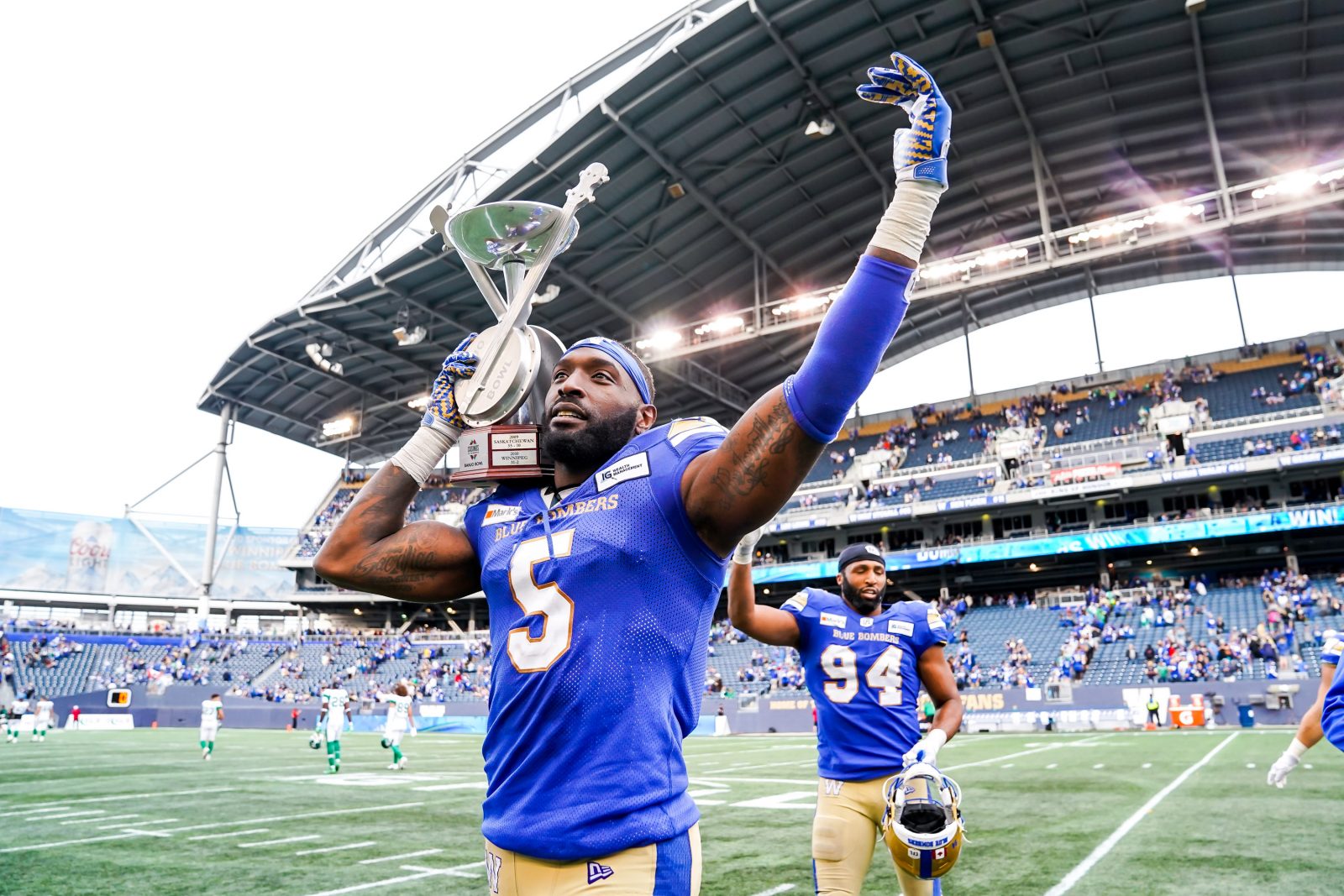 “… We’re still coming. We still have room to grow and we’ve still got plays to make. Right now, we’re good, we’re on a roll, 5-1. We’ll come in (Monday) and check the film and get ready for next week.

“Nic said it, Adam said it, I’m going to say it. We still on the uprise, we have some things to fix. And once we get those things fixed and we start rolling and everything becomes smooth, like how it was at the end of ’19, then we’ll be good.”

THE DEFENSIVE NUMBERS… the Bombers are posting are in jaw-dropping territory. Winnipeg kept an opponent to under 10 points for the fourth time in six games and hasn’t allowed a touchdown since a Ka’Deem Carey score in the second quarter of an 18-16 win over the Calgary Stampeders on August 29th – a span of 153 minutes and 26 seconds.

The Bombers have allowed just three points in the fourth quarter all season, and shut out the Riders in the final 30 minutes of each of the last two weeks, outscoring them 37-0 in the second half.

“Being a veteran group, we have the ability to adjust really well,” Bighill explained. “Depending on what we’re seeing or how they want to attack us in the first half, we make adjustments. We have different kinds of checks we come out with and we’re able to play things differently and tailor it to what they’re trying to do. We have a great group that is smart enough to go ahead and do that.” 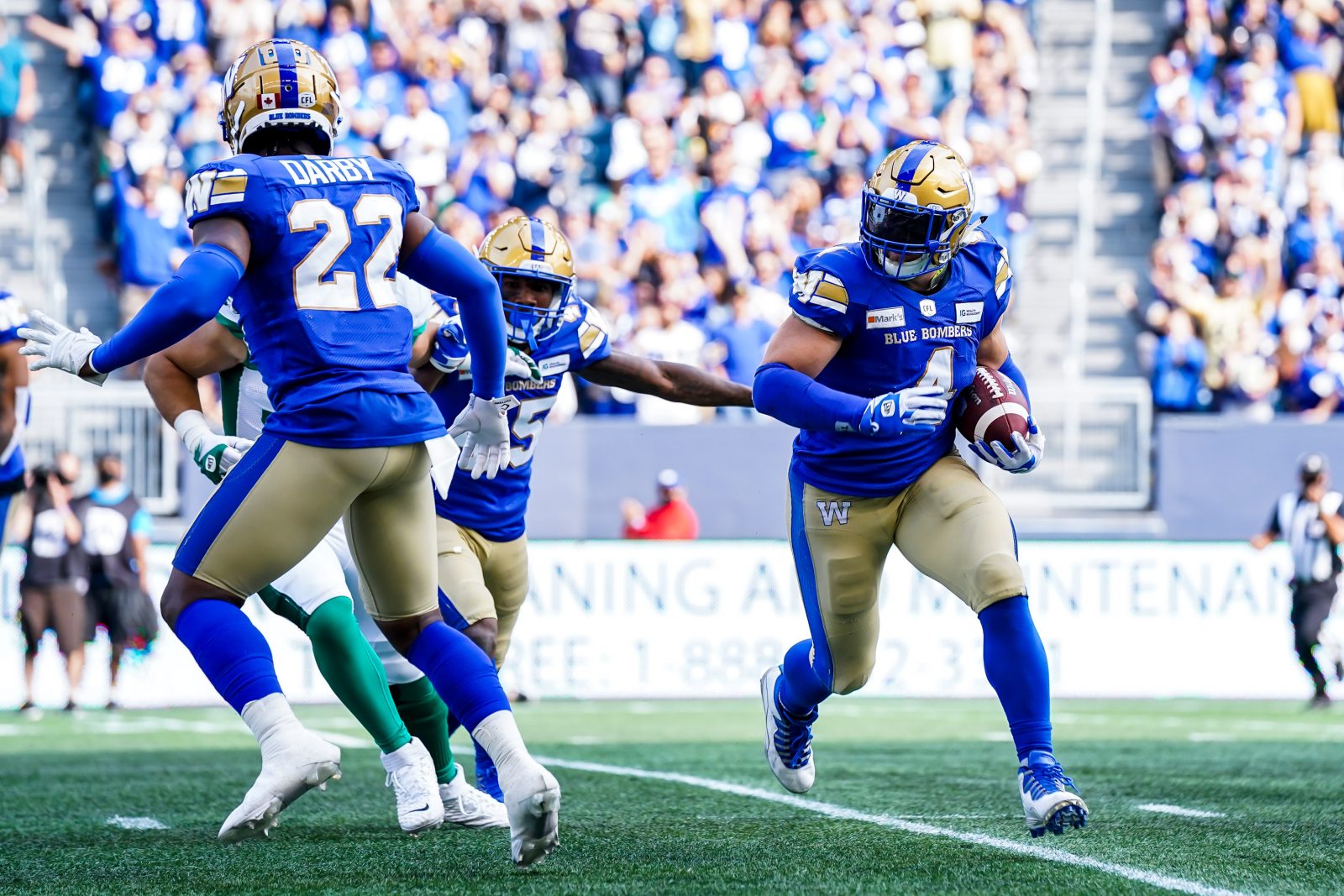 CALL IT A BRAWL, A MELEÉ, A BROUHAHA, A DONNYBROOK… or whatever, but that dust-up that occurred after the second of Sean McGuire’s three touchdowns on Saturday will certainly be looked at again by CFL HQ. There were six penalties assessed on that one play totalling 110 yards, with two Roughriders – linebacker A.J. Hendy and defensive tackle Garrett Moreno – being ejected.

Pat Neufeld, Kenny Lawler and Andrew Harris all received unnecessary roughness penalties. Harris ripped the helmet off cornerback Christian Campbell, but did not throw any punches. Asked if he thought the Bombers ‘got away with one’ after not having a player disqualified, O’Shea said:

“I’ll have to see the film. The Command Centre has the ability to use the footage to see who gets UR’s and who gets ejected. So I imagine there’s a lot of rough stuff that goes on, but from what I know from the past, ejections are the result of punching. I wouldn’t say our guys are squeaky-clean either. But who knows?”

Bombers slotback Nic Demski was involved in the skirmish and was asked what happened or instigated it.

“I don’t know,” he said. “I was away from the play and saw some guy on top of Sean (McGuire) put his elbow in there so that’s when I got involved and then all of a sudden I got rag-dolled by Micah Johnson and then I saw another guy go on top of Andrew (Harris).

“I was just trying to look out for my teammates. Really, I was just trying to split everything up but obviously I got in trouble for that. We’ll see what happens with that. These games there’s a lot of emotion and intensity out there. You’ve got to sometimes put that emotion away. That was a moment where there was a lot of emotion in the air, for sure.”

Over the last two weeks the Bombers were penalized 15 times for 161 yards while the Riders were nailed for 22 infractions for 245 yards.

“We try to keep it cool,” said Collaros. “Sometimes the emotions of the game get to you. There are some guys on that side of the ball that were doing some dirty stuff the week before as well, and it carried over into this game. Things happen.”

“You know the history… these Prairie teams have been at it for a long time, well before we’ve been here. It’s just keeping the tradition alive, really. A game like this, blood boils hot and at the end of the day sometimes it spills over. We’ve got to make sure we’re smart and on the right side of it and it looks like we were today.

“We preach playing smart football, we preach playing tough football and sticking up and protecting our guys. We really try to stay away from doing stuff that’s going to hurt the team. That might be an example of that. That reinforced what we talk about all the time.” 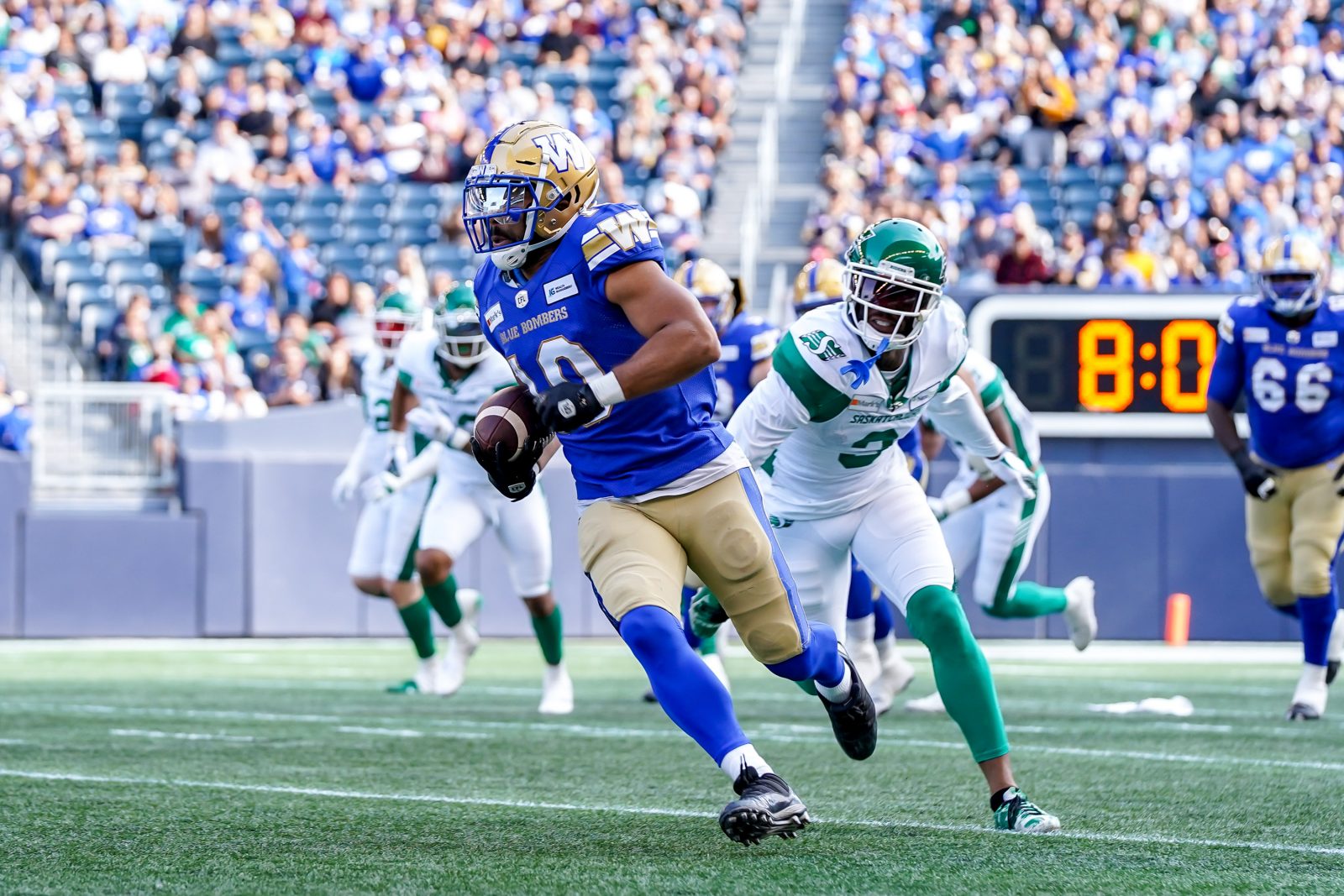 THE GAME MARKED A CAREER-BEST… receiving total for Demski, who finished with five catches for 134 yards, including 83 yards after the catch.

“This game is something I look forward to – Labour Day and Banjo Bowl, I look forward to that every year,” he said. “I started my career out in Saskatchewan and then over to Winnipeg where I’m from so playing on the good side of things, it’s always an exciting game to play in front of this crowd and get a big win. There’s a lot of emotions out there, but I’m just happy we put on some good football for our crowd to enjoy.”

The Banjo Bowl effort came a week after Demski scored a TD in the Labour Day Classic, but also felt he had some unfinished business.

“Last week I felt like I had a down week, I didn’t make the most of all my opportunities,” he said. “Today I came into this game just making sure I capitalized every time the ball came to me. I still feel like I could’ve done a little bit more… I got tackled on my two long ones and felt like I should have scored on those. But I’m happy with what I put out there today.

“We’ll come and watch film (Sunday) and make the corrections but it was a great game by our offence altogether.”

ONE MORE FROM DEMSKI… who helped put the two-game sweep of the Riders into perspective while looking ahead. The Bombers, FYI, are in Edmonton next Saturday for the fourth of an eight-game run against West Division opponents. The Bombers are now 3-0 to start off this stretch.

“Huge. We had Calgary before this, now we go out to Edmonton… these are all big West games,” said Demski. “I’m sure all you guys know how big the West is, how competitive it is… all these wins go the extra mile so when we can do it to Sask when they’re the No. 1 team in the West and now we take over, that’s a huge momentum run. So we’ve just got to keep it going.” 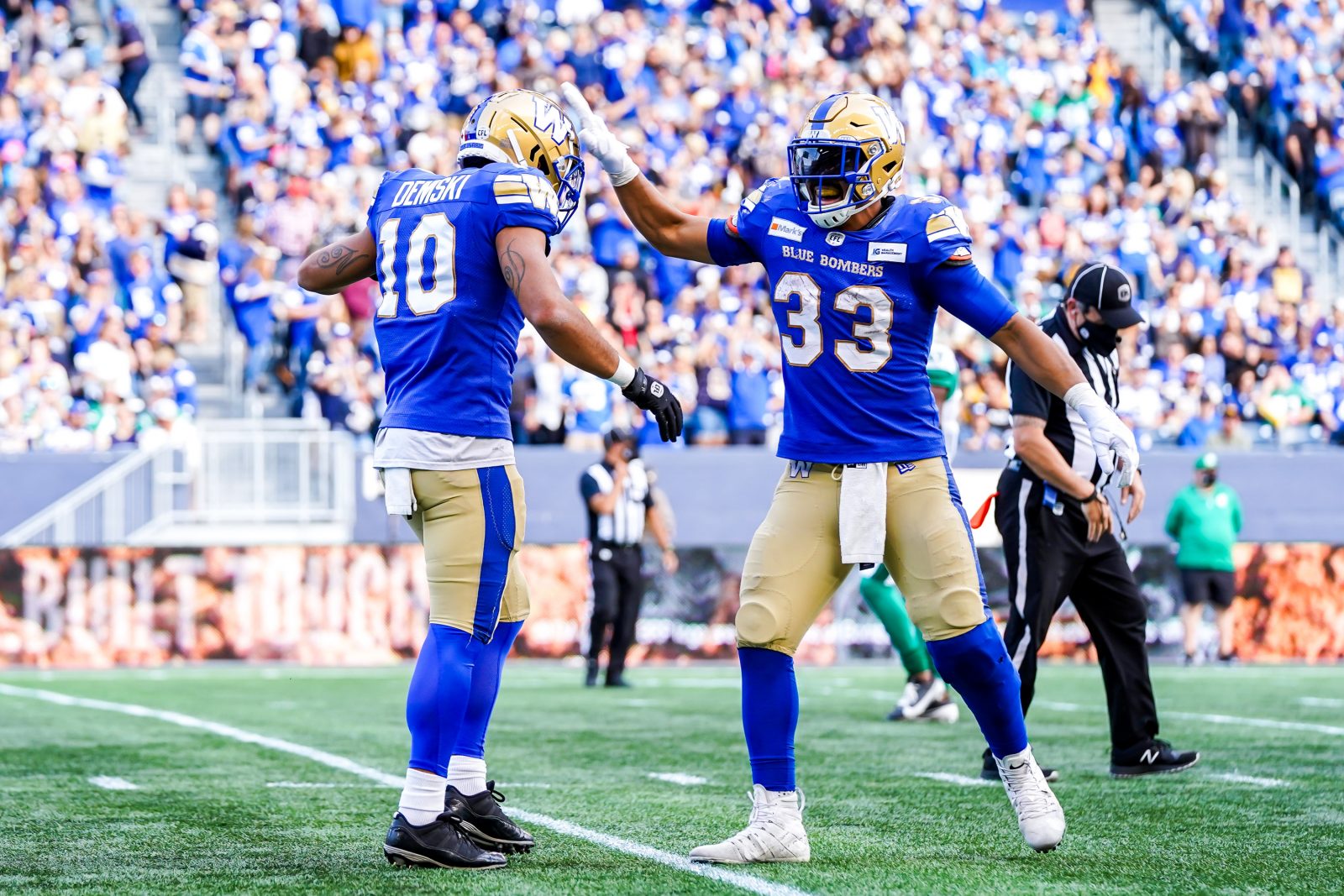 THE BOMBERS’ KICKING GAME HAD ISSUES… on Saturday, as Marc Liegghio missed a 48-yard field goal attempt and his first two converts before connecting on his last three.

Over his three games as the placekicker since replacing an injured Tyler Crapigna, he is 5-for-8 in field goal attempts. Crapigna was 3-for-5 before being injured, meaning Winnipeg kickers have connected on 61.5 percent of their field goal attempts. As Troy Westwood so perfectly put it on CJOB’s pre-game show, following Justin Medlock as the kicker in this town is like following Elvis to the stage.

The Bombers do have a new kicker in Ali Mourtada in town and he’ll practice with the team this week after finishing his quarantine. Said O’Shea of Liegghio’s struggles:

“It’s tough. On a personal level you don’t like to see a guy struggle a little bit, but I thought he bounced back. He hit some at the end, which is good. That shows great growth in my mind. He had a tough couple plays out there and then he manages to get it together and make some kicks. That is part of the process for any young kicker. I know he’ll be very good. I know that.”

AND, FINALLY… the last word goes to Jefferson on playing in front of a capacity crowd at IG Field:

“Hey man, 33,000… we gave them exactly what they wanted. They wanted smoke, we gave them smoke. They wanted action, we gave them action. C’mon down to Winnipeg. That’s what we want to do. We want to entertain our fans and if our fans could come out and give us the noise on defence and special teams and pop up on offence when we need it, we need that. Keep on bringing it.”