It’s an amazing accomplishment, one in which every member of the Winnipeg Blue Bombers and its football operations staff should be thumping their chests and raising their fists in a show of pride. The Blue Bombers completed a perfect home season in Saturday night’s 31-21 victory over the Montreal Alouettes, improving their record at IG Field to 7-0 in this condensed Canadian Football League season.

That’s a significant mark for a number of reasons, including because it marks the first time since 1984 that the Bombers finished a regular season unbeaten at home – they were 8-0 that year at old Winnipeg Stadium – and just the third time dating back to 1946 the club had an unblemished mark in their own back yard, including an 8-0 run at home in 1972.

One more, just to hammer home the magnitude of the feat: dating back to 1995 only five CFL teams have been perfect at home – the Bombers in 2021, the Hamilton Tiger-Cats in 2019, the Calgary Stampeders in 2016, the Montreal Alouettes in 2009 and the Toronto Argonauts in 1997. (Worth noting, the ’21 Argos are also still perfect at home at 5-0, with two home dates remaining, one against Hamilton, the other versus the Edmonton Elks).

Bombers head coach Mike O’Shea was asked about the idea of ‘defending the house’ in the post-game media Zoom calls and offered this: “I don’t know if I’ve ever talked about defending the house or anything like that. I will say we have to understand that the fans are the lifeblood of our league, so we need to honour them with good play that they’re proud of; that when they leave the building they’re proud they’ve come watch us. We don’t talk about that or anything, I just feel that our players are pretty observant and understand how good our fans are to us.”

The Bombers, who host the Western Final on December 5th, are now on an incredible 18-1 run at IG Field dating back to the fall of 2018.

“We have great fans. This atmosphere is unbelievable,” said Bombers receiver Kenny Lawler. “I haven’t played in a stadium since I was in Seattle and it’s very close to that. It’s loud, the fans are great… there’s nothing but love and just loud noise in here. It just throws off the opponents and it energizes us. We play for the fans, we play for our brothers next to us. The fans are just electric and just rocking the house. It gives us energy. I just give my heart out to them.”

There’s a size-large caveat to all this, of course – when the ball is put on the tee for the Western Final in less than a month, that perfect home record this year won’t mean a thing to the opponent rolling in here with visions of popping all the proverbial party balloons.

“We have homefield advantage. We have the fans here rocking and we know what we’re capable of here at home. It’s a nice set up,” said Lawler. “So now we’ve got to go out and execute. We’ve got to play our hearts out, we’ve got to play every snap to the fullest and when it hits 00:00 (no time left) we’ll see what the outcome is.” 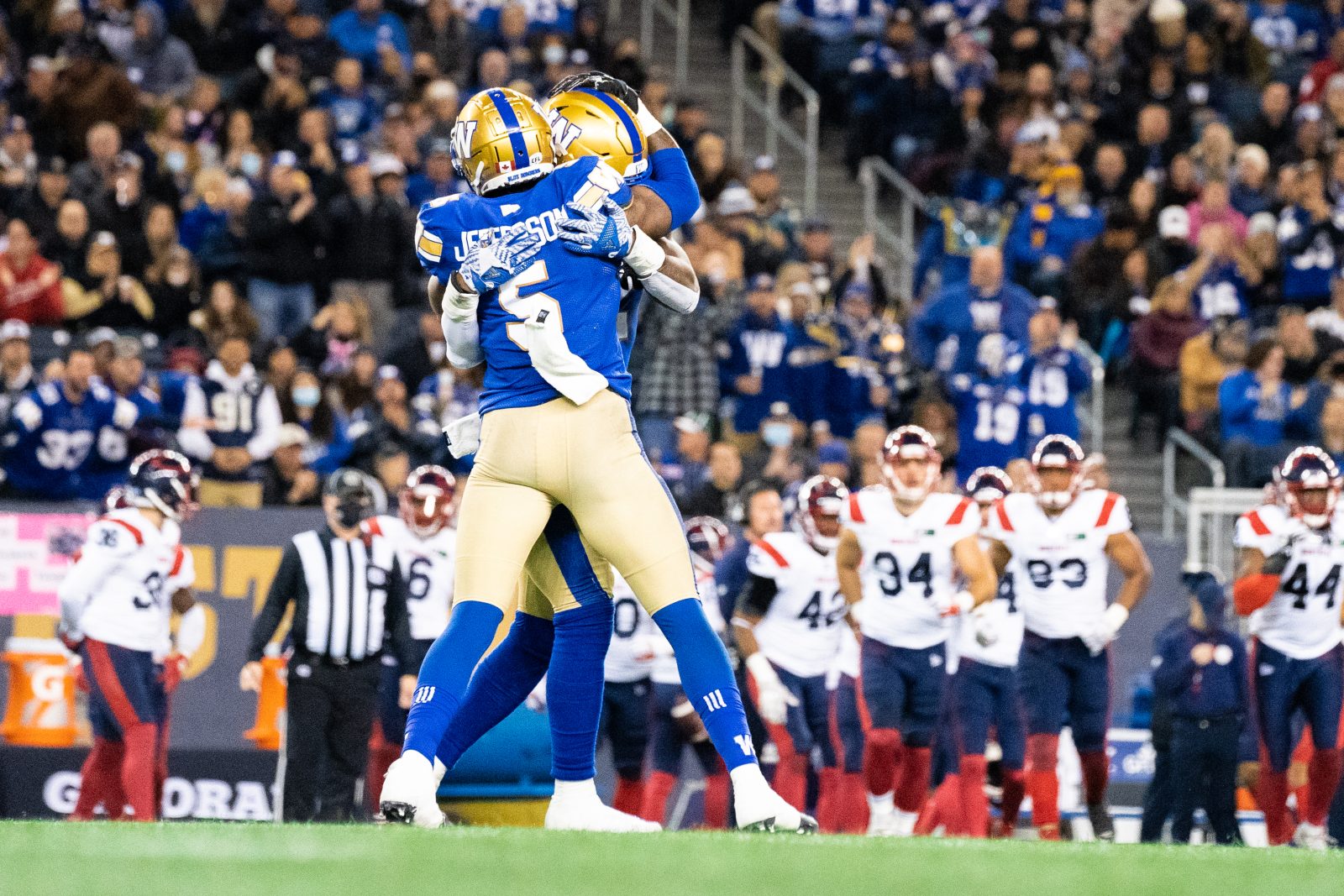 ANOTHER ASTONISHING STORY THAT JUST KEEPS GIVING… is the Bombers’ fourth-quarter dominance this season. We talked about it in our game recap but it’s certainly worth revisiting again. The Als had given the Bombers everything they could handle through the first 45 minutes but, as is their custom, the defence completely shut out their opposition in the fourth quarter.

After falling behind 21-14 on the Als’ first possession of the second half, the Bombers then out-scored Montreal 17-0, including 10-0 in the final quarter. Again, these numbers are jaw-dropping: Winnipeg has now shut out its opponent in the fourth quarter 10 times in 12 games this year and out-scored teams 116-6 in the final 15 minutes.

“I can’t explain it,” said O’Shea. “There’s definitely an energy and I just think the level of execution was pretty high from our guys around that time. I just don’t know how to explain it. But you definitely want it for four quarters and not just the fourth quarter.”

Here’s another compelling component to the 116-6 total: the Bombers haven’t given up a fourth-quarter point since a 20-yard Sean Whyte field goal in a 37-22 win over the Elks back on September 18 – a span of FIVE straight games. The offence deserves some credit in that, too, as the attack has outscored teams 58-0 in the fourth quarter over the last five games.

“There’s a calmness and a confidence… a cool, calm and collected thing,” said quarterback Zach Collaros. “We’ve got a lot of guys who have been in the fight together. Everybody understands that throughout the highs and lows of the game it’s really just about executing the next play. So, whether it’s at the beginning of a drive, the middle of a drive or whatever’s happening around us everybody knows the next play is the most important one. That’s why we’re able to execute in big moments.” 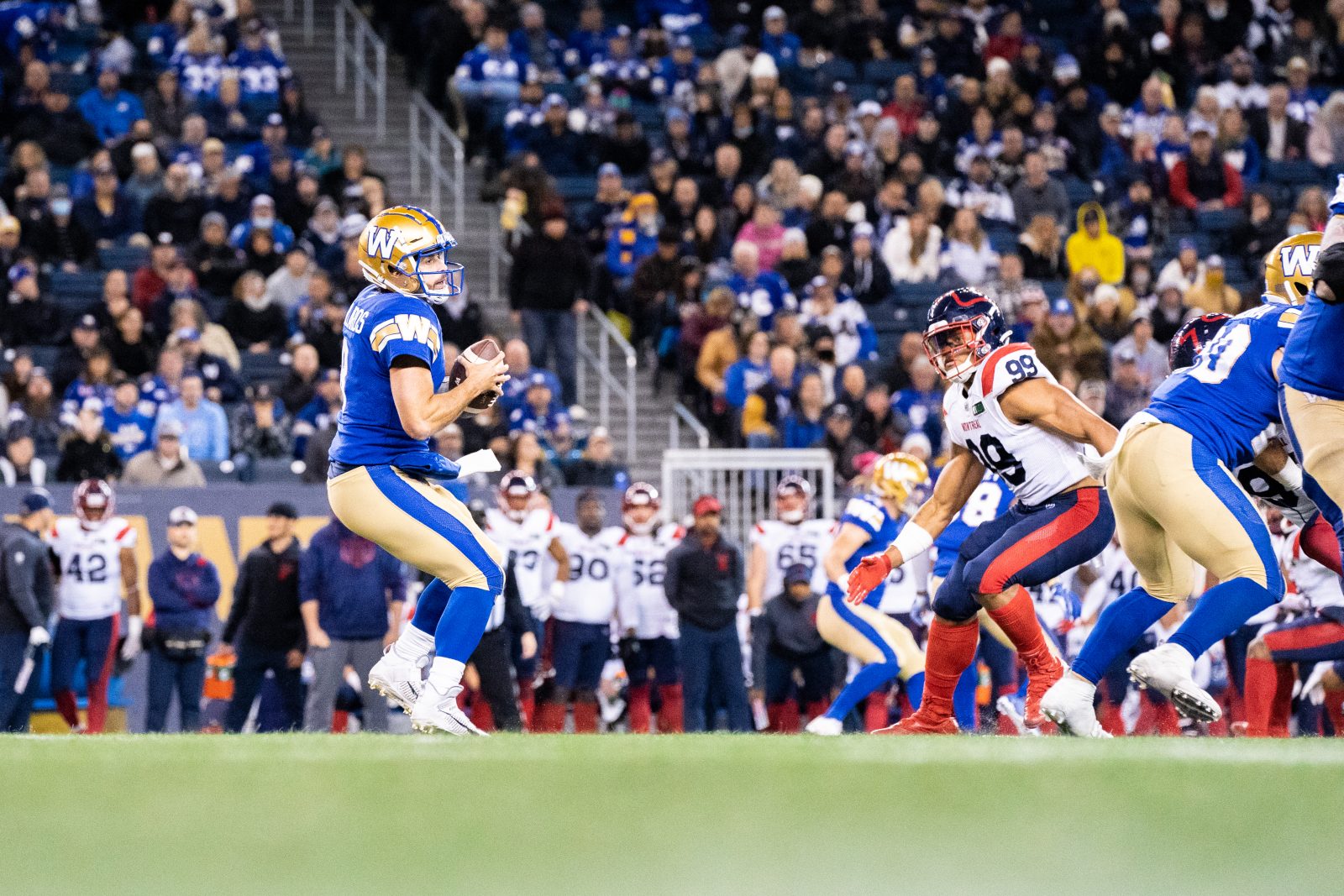 A SALUTE TO ALOUETTES’ RUNNING BACK WILLIAM STANBACK… who finished the night with 16 carries for 106 yards and, in the process, eclipsed the 1,000-yard rushing mark. Stanback became the third running back to run for over 100 yards in a game against the Bombers, after Toronto’s John White and D.J. Foster managed the same in back-to-back meetings with the Argos in the second and third game of the season.

Interestingly, Stanback had 75 yards in the first half Saturday night, but just 31 in the second – including managing only 12 yards on his final five carries.

“I think we just finally started playing our game,” explained Bombers defensive tackle Jake Thomas. “Early on, especially the D-line, we weren’t really getting vertical – we were playing pretty lateral. It just seemed like the second half on we started getting that vertical pressure and things started to work well for us.

ONE MORE FROM JAKE, WHO IS AS HUMBLE AS THEY COME… The big man had four tackles and two sacks against the Als – his first two-sack game since August of 2019.

“For me it’s great playing next to Willie Jefferson, Jackson Jeffcoat, Steven Richardson and Casey Sayles and Jonathan Kongbo and T (Thiadric Hansen),” said Thomas. “I don’t think too many teams are drawing up to double-team me, so whenever I have my one-on-one opportunities I’ve just got to do my part for the defence and get home.” 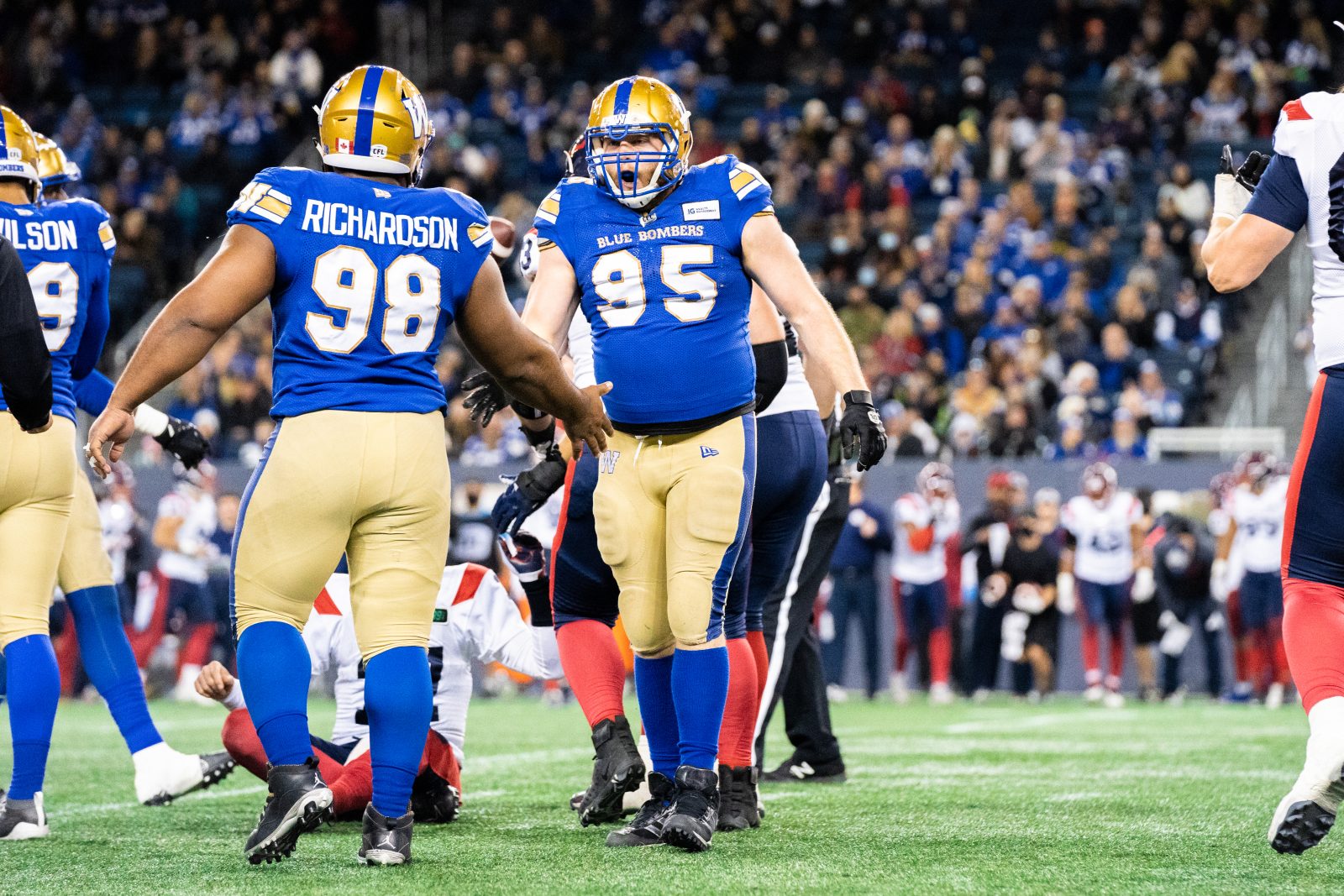 THE TURNING POINT ON SATURDAY… came before the fourth-quarter dominance and after the Alouettes had jumped ahead 21-14 with their first possession of the second half. The Alouettes next five possessions resulted in punts and their final two of the game ended with interceptions by Adam Bighill and DeAundre Alford.

“We gave up a long drive with four minutes to go in the first half and prior to that I thought we were doing a pretty good job… we gave up a fumble for a touchdown,” said O’Shea. “It’s just an odd feeling going into the dressing room and then to come out – I should probably just keep my mouth shut at halftime because we come out and we give up another (TD) drive. After that I thought our guys were pretty darn good.

“I’m confident in our guys, that’s for sure. I don’t like the little mistakes and some of the things that showed up that we really haven’t fallen prey to throughout this season. So, I don’t like that they creep in now but I’m sure they’re one-offs and we’ll look at that film closely, coach it hard and I’m sure we’ll be better.”

AND, FINALLY, WE’LL GO BACK TO KENNY LAWLER FOR THE LAST WORD… the Bomber receiver, who finished with seven catches for 111 yards and retook the CFL lead in yardage with 915, offered this about his team’s second half – particularly their work in the fourth quarter.

“It’s a great win. It’s a great feeling, especially as adversity reveals character. The character of our team, like I said, we’re resilient, tenacious, we don’t care who’s in front of us, we’re just going go out there and keep getting it. We’re working down here and even if we’re down we’re still working. We don’t fold. That’s what we are. That’s what we do.”