Even after taking a significant step back for a big-picture look, it’s difficult to know where to begin when analyzing the night that was the Canadian Football League’s 2021 season opener at IG Field. Football-wise it was far better than most expected, with the Winnipeg Blue Bombers and Hamilton Tiger-Cats combining for just 11 penalties, three turnovers and only a handful of glaring mistakes.

The Bombers’ solid 19-6 victory was authored by so many, with the dominant play along the line of scrimmages continuing in a flashback to the 2019 Grey Cup, with quarterback Zach Collaros at his creative best when flushed from the pocket, with the defence forcing three turnovers and with Brady Oliveira, making his first pro start for an injured Andrew Harris, rumbling for 126 yards.

Still, the story was just as much – perhaps even more – about seeing fans in the stands again. Some 29,376 strong, they jammed the concourses and seemed as content hanging with friends as they were with the action on the field, as good as it was. And given what has happened over the last 20 months, that’s obviously no small thing. So, before we get into the meat and potatoes of analyzing the Bombers’ season-opening victory, let’s begin with that.

It was Bombers head coach Mike O’Shea who captured that thought best in his post-game media Zoom call when he was asked about digesting the CFL’s return and it being a ‘long time coming.’

“It’s interesting you said, ‘long time coming,’” said O’Shea. “I said the same thing to the guys: ‘It’s a long time coming’… a little Tragically Hip quote. It was awesome to see the fans. I think it’s important that we recognize the provincial government allowed us to have the biggest crowd in Canada thus far during hopefully the end of the pandemic.

“… For the fans to show up like they do, and they were loud, it’s pretty special. You saw the players at the end of the game thanking the fans and for the young guys that haven’t been in our stadium before, I think it was a real treat to know how much the citizens of Manitoba care about the Bombers.” 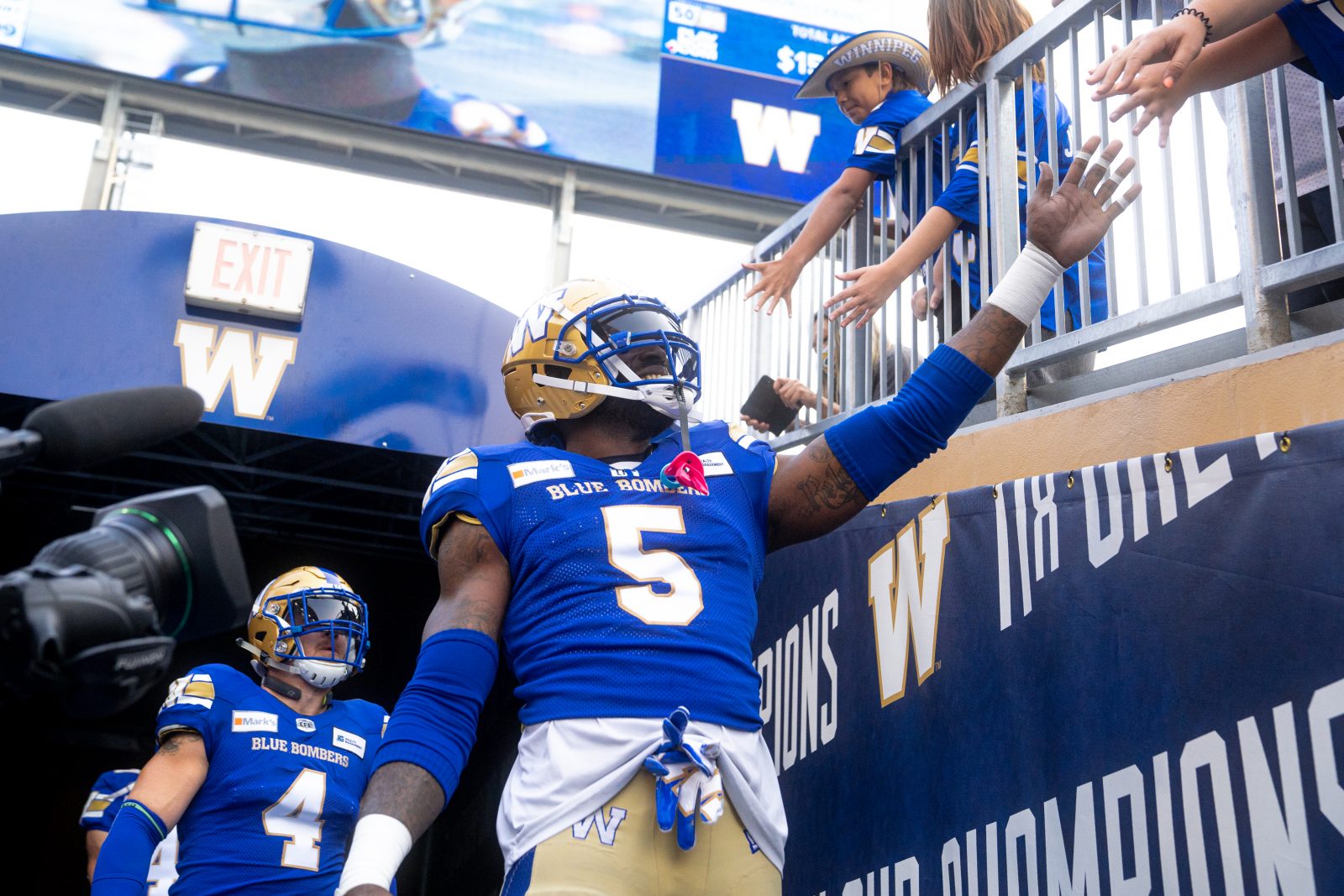 ONE OF THE MOST COMPELLING… side stories to Thursday night was Oliveira and a Winnipeg product replacing a Winnipeg legend. Oliveira finished the night with 22 carries for 126 yards and one reception for 21 more yards in a sensational debut.

“It’s so hard to explain to you the feeling I got running out of the tunnel today… it was crazy,” he said afterward. “The atmosphere was loud, so many people in the stands, obviously me being from Winnipeg it was a childhood dream to run out of that tunnel in the home opener in my first career start.

“But, I’ll tell you this: I was so hungry today. I was so hungry coming off that injury in ’19. I just had one thing in mind and when I get the ball I just want to run violent and run physical and do my job and just make them not want to tackle me. I was running out the tunnel pissed off because I just wanted everyone to feel me. I wanted Hamilton to feel me and I wanted to make my presence known to the league.”

Oliveira’s game grew with the extra work in training camp and that same script followed in Thursday’s win. His first two carries were for thee yards and minus three yards and he had 36 yards at halftime. But his 90 yards in the second half featured eight carries of five yards or more as he and the Bombers O-line pummelled the Ticat front.

“It makes me feel like the coaches trust me and that’s exactly what I want: my teammates to trust me, everyone in that huddle to trust me,” said Oliveira, who was quick to praise the men up front. “That’s a good feeling. Being a pro athlete, if they trust you that means that they know you’re handling your business each and every day when you come to the facility. So, knowing that my teammates trust me, the coaches trust me, the front-office people trust me is a great feeling.

“I started feeling it around the beginning to mid second quarter and just by me running physical and violent all game when the second half came they didn’t want any of it any more. I was getting a lot more comfortable and things were starting to hit really nicely.” 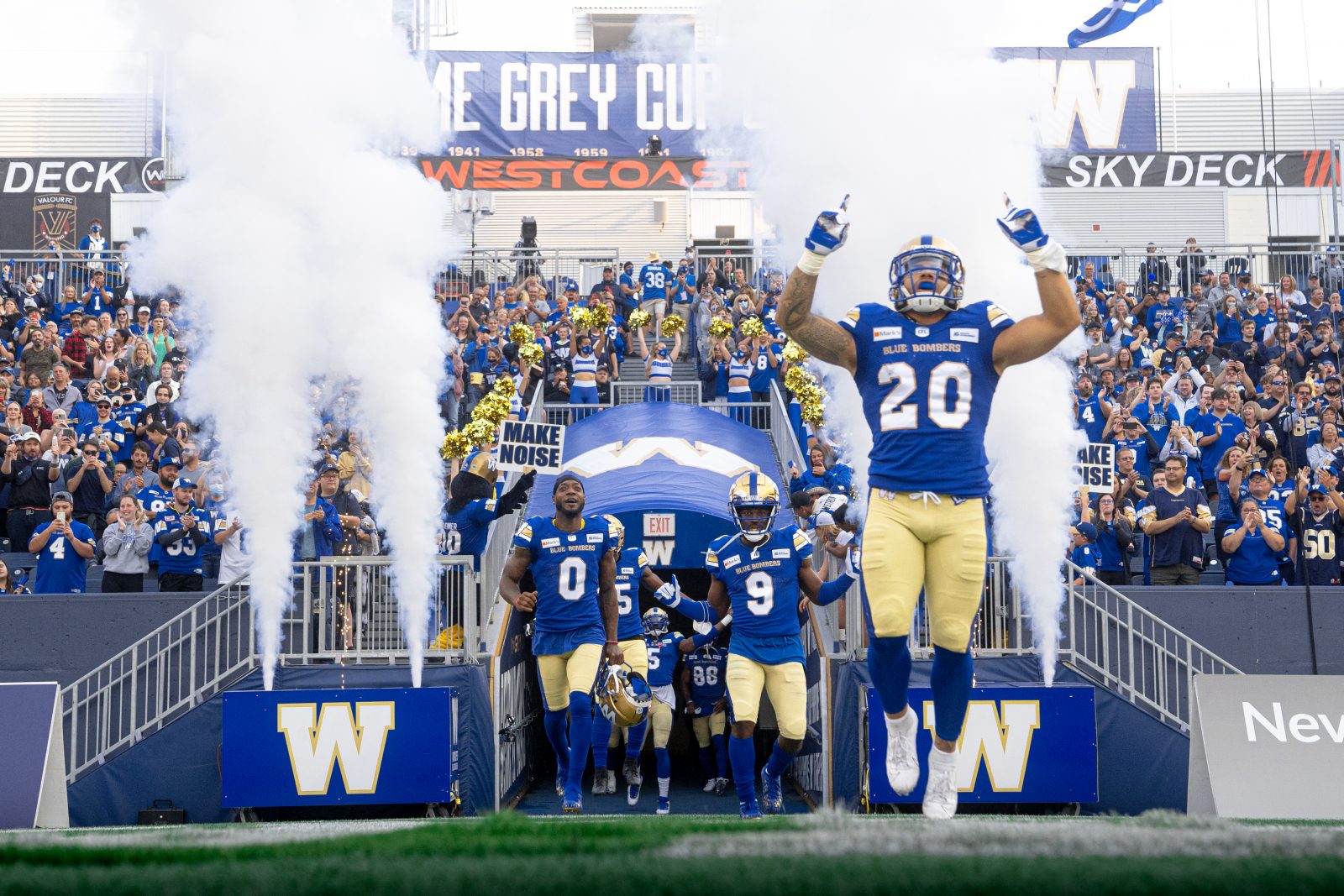 THE PASSING NUMBERS FOR COLLAROS… look modest – he finished 18 of 28 for 217 yards with two TDs, both to Kenny Lawler, and zero interceptions. But the way he moved around the pocket to buy time provided a bit of a flashback to Collaros at his best during his CFL days and made me wonder if he isn’t just sipping from the proverbial fountain of youth, but bathing in it. Just for the record, Collaros is now 5-0 in his starts as a Bomber and has thrown for six touchdowns against just one interception.

“I probably got sacked two or three times,” said Collaros. “I told (the offensive line) during training camp, ‘Hey, I run around a lot. So, if there are sacks I’ll buy you a steak or a beer or something.’ It’s just kinda is what it is.

“But, man, they were amazing. The receivers were fighting and keeping plays alive, coming in and blocking whatever they were asked to do… so a total team effort.”

ONE MORE FROM COLLAROS… echoing the comments from O’Shea about the CFL’s return:

“I’m just so happy for the CFL, for CFL fans and for the players, guys who didn’t know what they were going to do here for the last 600 days,“ he said. “A lot of things have been up in the air and we really couldn’t get a straight answer for a long time. So, to be able to come together and get this done tonight for the city of Winnipeg, for the fans, and for them to be able to celebrate what we accomplished in 2019… it’s amazing that we’re here tonight to do that.”

AS WE WROTE IN OUR GAME RECAP… by the way, that story can be found here, it was the Bombers defence that really was the backbone to the opening night win as they forced three turnovers and limited Hamilton to just 280 yards net offence. Still, to hear Willie Jefferson tell it, these guys will keep pushing for more.

The Bombers started three CFL rookies on defence in corner DeAundre Alford, halfback Deatrick Nichols and weak-side linebacker Jontrell Rocquemore. And when veteran Josh Johnson, lining up at dime, was injured in the first half, Brandon Alexander moved over from safety with another rookie Noah Hallett, coming into the middle of the secondary. Hallett was also replaced for a stretch by his older brother Nick.

“Our young guys have no ceiling,” said Jefferson. “The veterans we have around them are good veterans teaching them good things, good habits, so when they do get on the field or do get an opportunity to make a play or a situation where they have to make a play it’s not too big for them. They slow it down, comprehend, focus, and make a play.” 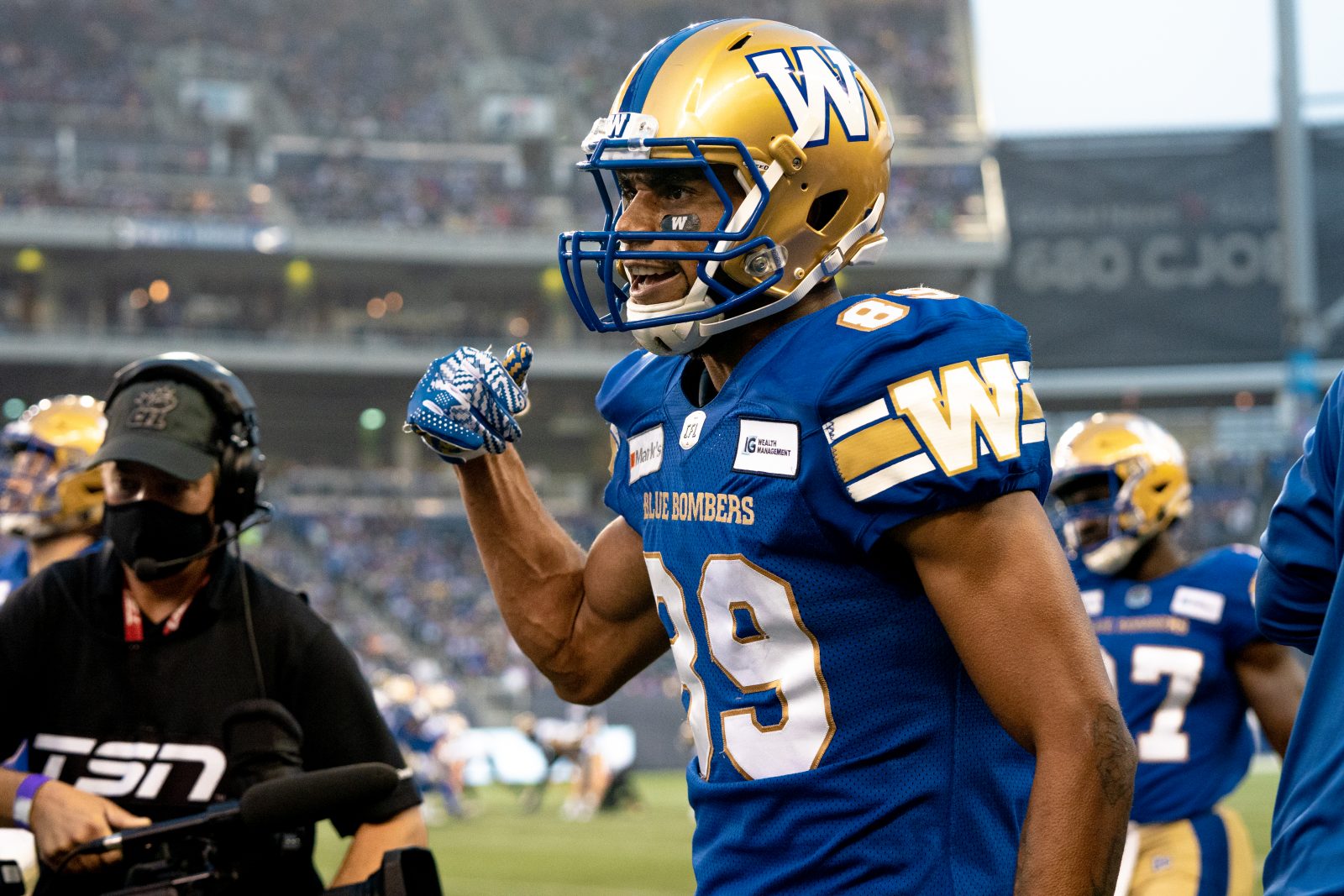 AND, FINALLY… we had seen Kenny Lawler consistently step up all through training camp and it certainly continued in the opener. The Bombers gifted receiver finished with four catches for 69 yards and two TDs.

Interestingly, since Collaros became the starter Lawler now has five TDs in his last six games, including playoffs.

“Kenny is just an amazing talent, in general,” said Collaros. “You guys can all see that. Just from an assignment standpoint he was amazing in camp, being a leader in that room and having accountability for himself and that’s what we all strive to do. His tangible things are off the charts and you saw that.”

As I tweeted during the game, get used to seeing the Collaros-to-Lawler connection.

Get used to hearing this in 2021: @ZCollaros7 to @K_Law2nice for their second TD connection of the first half. Now 14-6 for the @Wpg_BlueBombers

“When he came in I guess he had watched some highlights of me (from his college days at Cal) and he had an idea of how my game was,” said Lawler. “He came to me in 2019 and said, ‘Hey, man, I watched your highlights. I remember who you are and if I get in a jam I just might throw it up there.’ He coming to me off of just highlights gave me a boost of confidence. I just want to go out there and play my heart out for him because I know he’s going to get me the ball.

“Me and Zach, our chemistry is steadily growing. It’s going to be exciting for the rest of the season.”