It was a ‘reveal’ that came without a lot of flash or braggadocio. None, actually. And because it’s been so subtlety delivered, in many ways that makes it all the more endearing. We’re not too sure of the exact date of origin, but somewhere along the way the Winnipeg Blue Bombers veteran defenders began to refer to their unit as ‘The Dark Side.’

It’s a nickname that would be dropped here or there occasionally in interviews but, again, isn’t something the players went out of their way to promote, nor has anyone in the media really followed up for further explanation. And so it was following Saturday’s total and complete evisceration of the B.C.. Lions in a 45-0 win and as Willie Jefferson was wrapping up his post-game media Zoom call when yours truly asked about ‘The Dark Side’ moniker. For those who may have missed it, Jefferson explained it this way:

“All the light is on the other side of the field. We let D.A. (Darvin Adams), Zach (Collaros), Andrew (Harris), Brady (Oliveira)… we let those guys light it up. We’re going to turn off the lights. We want to play in the dark and in the dark is where it gets dirty, it gets real grimy and it’s a street fight. That’s how we play football: 60 minutes of bully ball, 60 minutes of fists swinging, eyes getting black and all that… fat lips, bloody noses, that’s how we play football. We play clean through the whistles, but we still want the lights out.

“That’s just the mentality that we have. I think me and Bigs (Adam Bighill) came up with in 2019 and it’s just something that we’ve just been rolling with; something that we fed into, something that we believe in. This ‘Dark Side’ stuff… the other thing is somebody’s got to be the bad guy. We don’t have any problems being that. We don’t have problems stepping on the field and letting them know that we’re coming out there to punch them in their mouth and shut ‘em up. If they want to step up to it, then let ‘em step up. We’re going to keep swinging.”

Too much, you say? Look, in the words of the immortal Muhammad Ali, ‘It ain’t bragging if you can back it up’ and Saturday’s win was the perfect representation of that. The Bombers pitched a shutout against the Lions – their first blanking since a 31-0 home win over the Saskatchewan Roughriders in Winnipeg on October 13, 2018. The result also marked the first time since October 25, 1970 that the Lions were shut out (29-0 in a loss to Calgary).

B.C. managed just 199 net yards of offence and of their 13 possessions, nine ended in punts, two more resulted in turnover on downs, one ended in an interception and another in a missed field-goal attempt. The Bombers forced the three turnovers, registered four sacks and limited the Lions to just 37 percent (7-of-19 on second-down conversions).

“We’re relentless, disciplined and we play as a team, we play together as one not as 12 individuals,” said Jefferson. “We stick to our process. We liked our preparation coming into this game, coming into any game. The film study we put in as a defence, the time and effort we put into practice and it’s the extra stuff we do as a whole that all comes together when we come out and play football like this.” 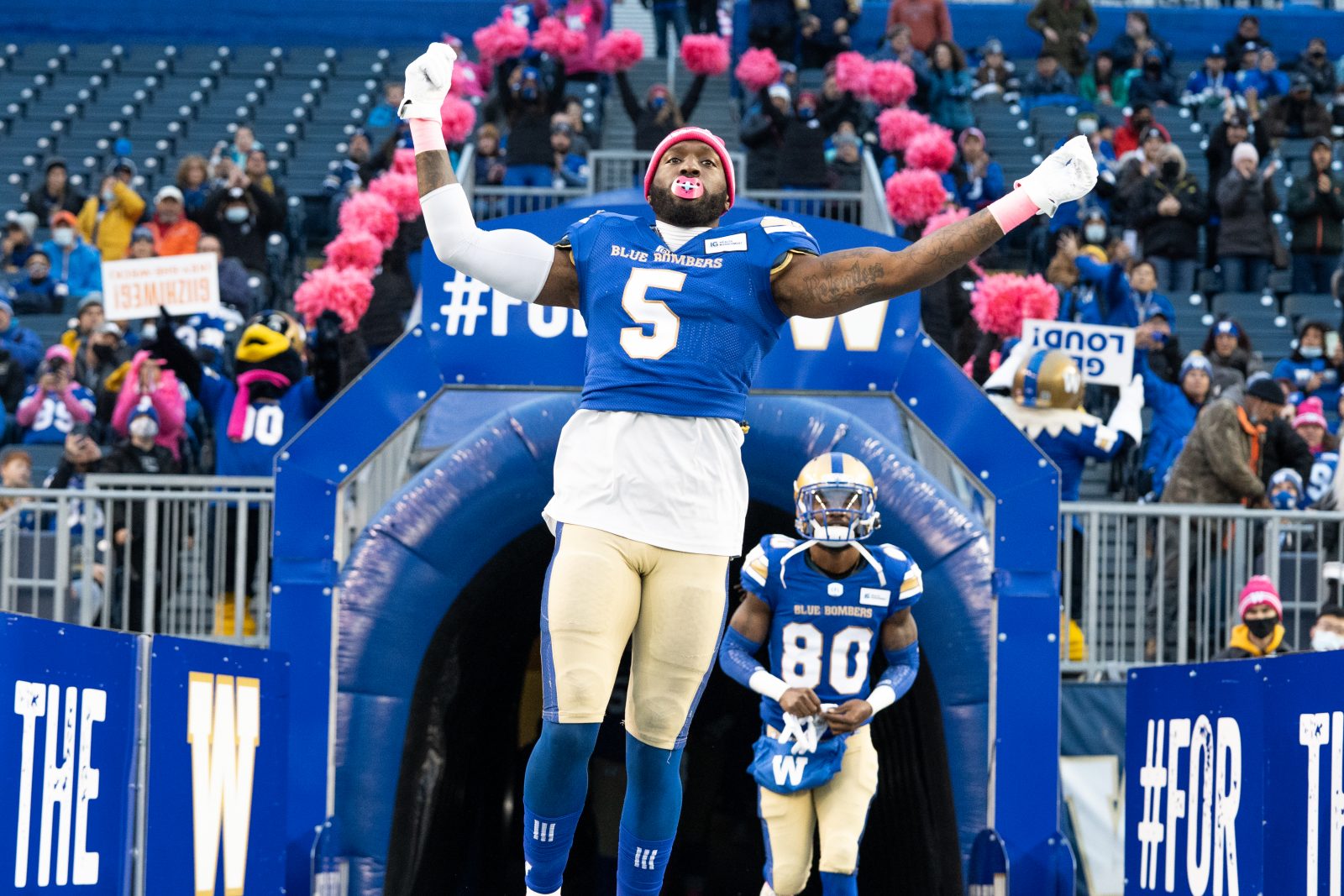 THE BOMBERS WILL FINISH FIRST IN THEIR DIVISION… for the 21st time dating back to 1936, after playing the first six years in franchise history in the Manitoba Rugby Football Union.

Some numbers, for context:

The Bombers had been down-playing the significance of finishing first all week, sticking to their ‘just want to go 1-0 this week’ mantra, but with one more win, at home, the club will punch its ticket to another Grey Cup berth. So, what does it mean to finish first, Mr. Jefferson?

“It means we’ve just got to get ready, try to get prepared, stick to our process and stay healthy,” he said. “We still want to play Winnipeg football for these last couple of games in the regular season and just get ready for the playoffs. We want to go into the playoffs hot, like we always do, and just keep it at that.

“That’s the type of ball we want to put on display. Three phases of football, giving it all we’ve got for our fans and for the CFL to see. We want to go hard for all 60 minutes and give Winnipeg Blue Bomber effort. Like I’ve heard, we haven’t been able to host a game here for the final since 2011 when we were in the East. Now that we’re in the West and we get a chance to host a home playoff game… we’re doing this for the city and for the fans. We played good Winnipeg football and we’re going to keep it up.”

As a result, the Bombers will host the Western Final on December 5th. For more details on tickets, click here. 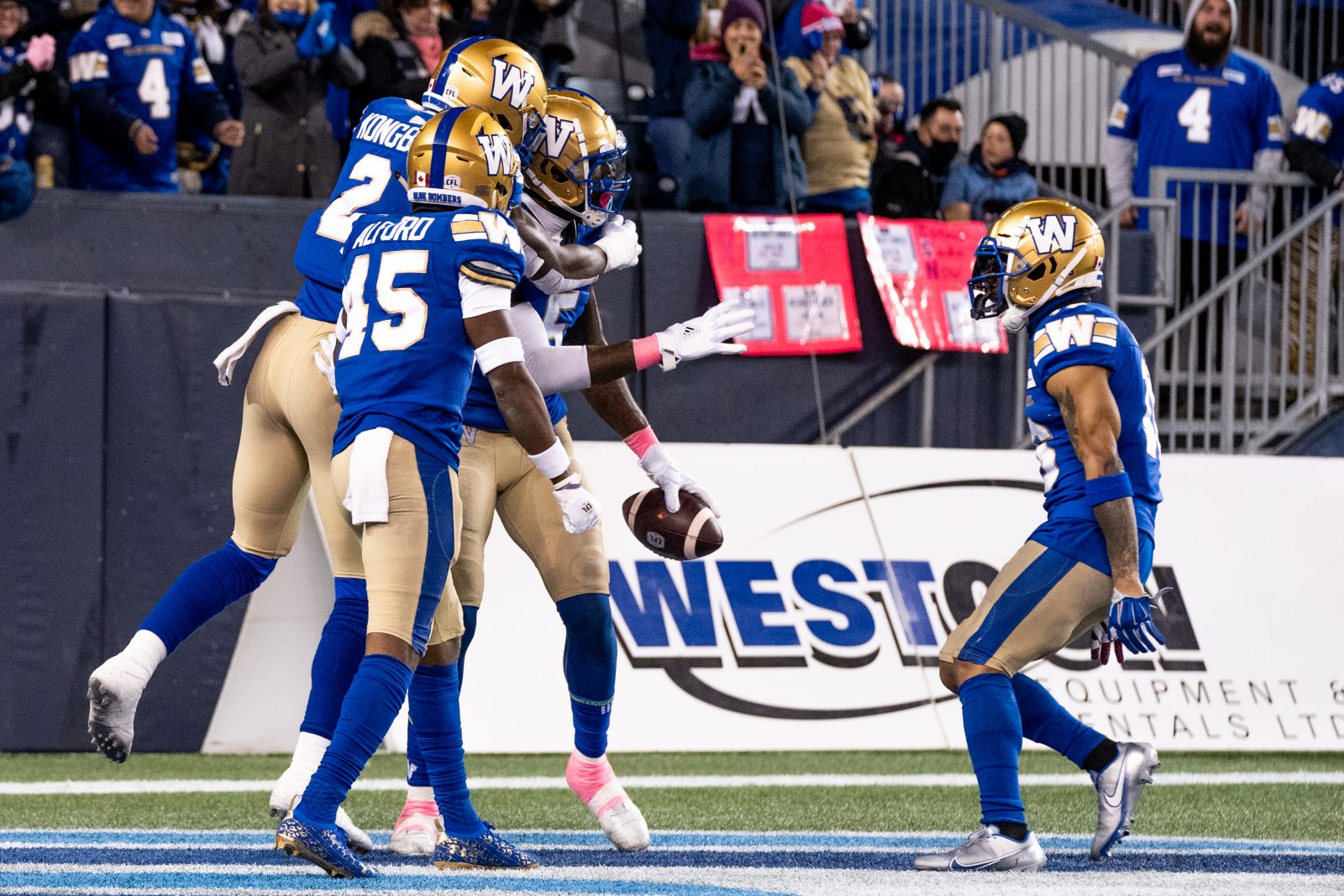 ONE MORE FROM WILLIE… his third-quarter interception return for a score was the fourth TD in his career and first as a Bomber. And for those who were asking about what he was doing as he made his way to the end zone, Jefferson explained afterward he was trying to hand the ball to safety Brandon Alexander, whose blitz and hit on Michael Reilly led to the errant pass that was snagged out of the air.

“When I’m on the field if I can get a chance to get my hands on the ball I’m trying to score,” he said. “And when I get a chance to score, I just want to have fun with my teammates. That’s it. I saw BA coming and I was going to give him the ball, but they had a defender coming up behind him so I just wanted to secure the touchdown and after we scored I wanted to have fun with my teammates. It’s not always about me, it’s about the team.”

THE BOMBERS AREN’T CURRENTLY LEADING THE CFL IN RUSHING YARDS… as a team this season – that honour falls to the Montreal Alouettes, who are averaging 155.3 yards per game, while the Bombers are second at 117.8.

Winnipeg has led the league in rushing in each of the previous three seasons (2017-19) as Andrew Harris won the rushing crown those years. What’s interesting this year is with Harris having missed four games due to injury the Bombers are still productive from the tailback position. Harris is fourth in the CFL with 623 rushing yards, Brady Oliveira is seventh at 365 and Johnny Augustine, who had four carries for 73 yards on Saturday, including a gritty 55-yard run, has added 76 yards.

That’s 1,064 yards rushing in 11 games from the three Canadian tailbacks.

SOME NUMBERS THAT ARE ONLY GOING TO FURTHER BLUR… the voting for the Bombers Most Outstanding Player and Most Outstanding Defensive Player awards… Quarterback Zach Collaros completed 16 of 20 passes for 267 yards with three TDs and zero interceptions for an astonishing 158.3 QB-efficiency rating. He continues to lead the CFL in passing yardage with 2,832 and in TD passes with 18.

Jefferson had his Pick-6 and a knockdown while Jackson Jeffcoat was credited with two sacks and now leads the league in that department with nine. Adam Bighill and Brandon Alexander, also defensive MOP candidates, were doing their thing violently delivering hits all over the field. 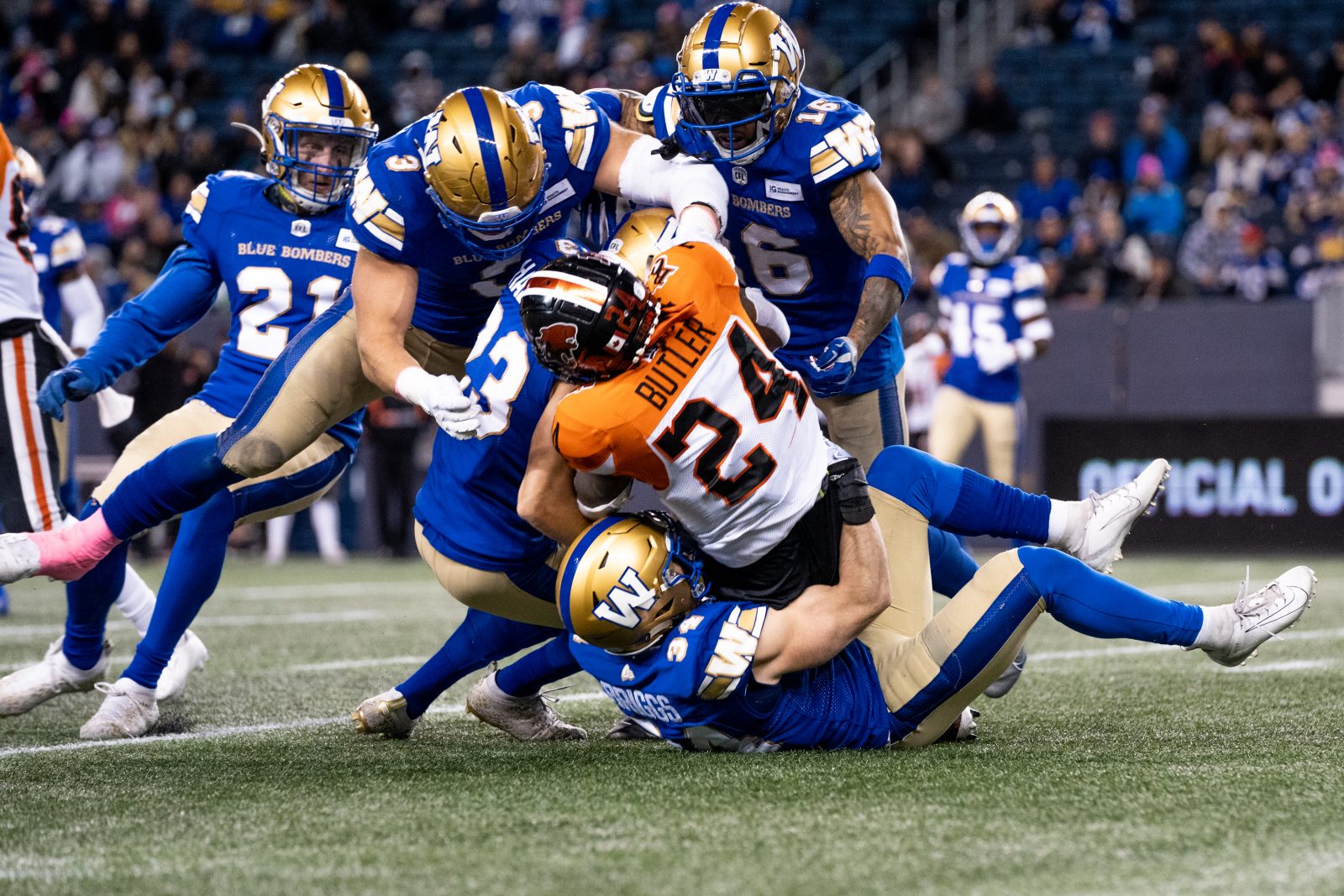 A SALUTE TO THE MEN ON SPECIAL TEAMS… as they have been under the microscope for parts of this year but delivered big time in the win over the Lions. Janarion Grant finished with 212 return yards – 149 yards on eight punts, 16 yards on one kickoff and 47 yards on a missed field goal. His 63-yard punt return TD was the fourth in his 16 games as a Bomber and the first return score by the Bombers this year.

Ali Mourtada didn’t attempt a field goal, but was good on all six of his converts while Marc Liegghio punted six times for a 47.5 yard average.

THE BOMBERS OFFENCE CRANKED OUT… 424 yards in net offence, including 272 yards passing and 162 along the ground. Six different Bomber players caught passes, including a four-catch/93-yard effort for Darvin Adams.

This is when the veteran receiver usually cranks up his game (see: playoffs, 2019) and his 93 yards receiving was his best total since finishing with 105 yards in the West Semi-Final win over Calgary in ’19.

“It felt good, but the outcome is what you’re looking for… we’re always just looking for the win,” said Adams. “It was great to touch the ball, but it was great to win also. (The receiving corps) is just a great group of guys. It’s awesome to play with those guys. It’s hard to double-team one person – we’ve got a lot of guys who can make plays. We just work hard. Woli (Drew Wolitarsky) KJ (Kenny Lawler)… a lot of people are making a lot of plays.”

AND, FINALLY… condolences to the family of long-time equipment manager Len Amey, who passed away on October 19 at the age of 89. Len was the club’s equipment man from 1970-90.