There’s a certain Groundhog Day feel to every Canadian Football League training camp, where one session blurs into the next and those trying to both thrive and survive the ordeal have the same scenarios seemingly play out over and over and over again. That’s a feeling even more pronounced in 2021 without preseason games to break up the monotony. And so for many grinding through the time between the opening of training camp on July 10th and the regular season opener on August 5th it can become akin to a crossing Xs through the completed days on a calendar.

The Winnipeg Blue Bombers, like their CFL brethren, completed their 14th day of practice on Friday. And with another week to go before teams have to make their final roster cuts – the deadline is 9:00 p.m. on July 30th – there’s still some heavy lifting to do before we get a sense of what the Bombers roster will look like before they meet the Hamilton Tiger-Cats.

With that in mind, here’s a look at some of what happened over the last two weeks and what’s ahead for the 2019 Grey Cup champs…

STILL TO BE DETERMINED…

The Bombers entered training camp with two holes in the secondary after the departures of Winston Rose and Marcus Sayles. That was only further compounded by the season-ending Achilles injury suffered by Mercy Maston last Sunday. The club did add a veteran starter in Alden Darby, acquired in a trade with the Toronto Argonauts, but this is still very much a work in progress.

Brandon Alexander will start at safety and returnees Nick Taylor and Mike Jones will secure spots. CFL vet Josh Johnson and Darby figure to be in the mix, but there are still a number of other new faces who are improving with each practice session.

Here’s Alexander when asked about the collection of talent in house:

“Every year you have guys coming in and competing so (the decisions) are going to be difficult, especially after you have the first cuts and you have to make another one and it’s getting tighter and tighter,” he said.

“You have a lot of good guys on this team… I really see each and every one of them being on our team, but we know in reality that doesn’t happen. So, I’m glad I’m not in that chair and making those decisions, but I love all these guys and all these guys have different attributes that can really help us on this team.”

The other huge question mark as camp opened was whether rookie Marc Liegghio – a 2020 draft pick – could replace Justin Medlock to handle all the kicking chores. Liegghio has flashed his big leg, but a so-so day early in camp also led to the club adding veteran Tyler Crapigna after he was released by the Montreal Alouettes.

A couple of potential scenarios remain in play here: Liegghio holds off Crapigna’s challenge and opens the season handling both the placekicking and punting, or the two share the duties with Lieggio punting and Crapigna, who hasn’t punted since college, handling the placekicking. 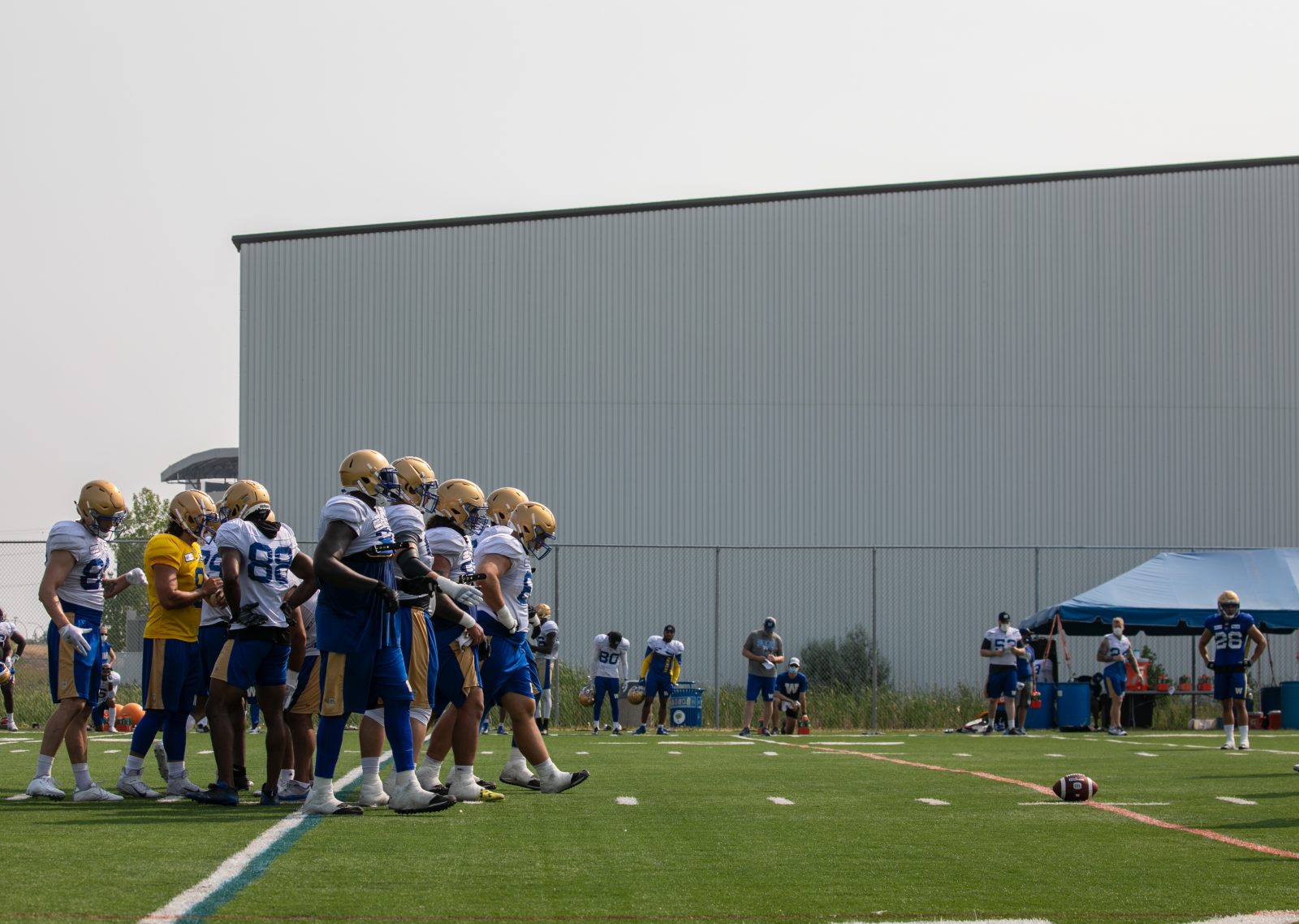 The Bombers are down to three quarterbacks after releasing rookie Dalton Sneed earlier in the week. A quick take on each…

Zach Collaros is really benefitting from a full training camp after being parachuted in at the trade deadline in October of 2019. He’s comfortable, confident and is regularly delivering strikes in each practice. The veteran pivot also has that ad-lib creativity that makes him dangerous when a play breaks down.

Sean McGuire may have thrown only a few passes in 2019 when he served as the third-string pivot, but his command of the huddle and leadership in this camp has been noticeable.

Dru Brown, the former Oklahoma State/Hawaii product, had a big arm and isn’t afraid to take shots downfield. He’s also showcased his running ability on occasion and has the speed of a wideout in the open field.

With such a large number of veterans returning and no rookie camp to preceed the main training camp, it’s no surprise that the experienced players take turns standing out almost daily.

So, the fact that Willie Jefferson, Jackson Jeffcoat or Adam Bighill pop off the page won’t surprise anyone. On offence, the best player through two weeks of camp has been receiver Kenny Lawler, with Collaros and Nic Demski right behind him.

We’ve spoken repeatedly in our daily Quick Hits about how Brady Oliveira has benefitted from Andrew Harris being rested to open camp. Oliveira doesn’t technically qualify as a ‘newcomer’, but he did only play about five quarters in his rookie season before breaking an ankle.

Here are a handful of newcomers who are making their cases through two weeks of camp:

WR Carlton Agudosi: Hard to miss the big target as he stands 6-6, but with Darvin Adams out over the last few days he’s moved into his spot with the starting receivers and is making plays. Read his story here.

WR Blake Jackson: The converted quarterback offers a little bit of everything as a potential slot, wideout and a guy who might get the occasional carry out of the backfield. He’s also been taking turns returning kicks. His story is here.

There are four import defensive tackles who are also jumping out in Casey Sayles, the 6-3, 289-pounder who has experience in both the XFL and AAF; Ezekiel Rose, who starred at West Virginia; Cedric Wilcots II, who was spotted by Bombers scouts at the College Gridiron Showcase in 2020 after a superb career at New Mexico State, as well as Ricky Walker, who has been in camp with both Dallas and Cleveland.