Jake Thomas lifting the Grey Cup above his head on that early Sunday evening; Mike O’Shea tightening his shoulders as he is bathed in an orange Gatorade shower; Andrew Harris clutching the game’s MVP and Most Outstanding Canadian awards, one in each hand.

Of course, there are many, many more snapshots etched in memory banks from the last game the Bombers played way back on November 24, 2019.

And now, after what seems like an eternity, the Bombers will actually get down to the business of defending that championship all these months later and following the cancellation of the 2020 Canadian Football League season due to the global pandemic.

One of the remarkable stories during this long wait for the CFL to return is how Bombers management was able to keep so much of their roster intact since the end of 2019 – especially in a league that has an overly-active free-agent period and also had to work through a shrinking salary cap.

The returning starters, by unit:

Gone are CB Winston Rose (Cincinnati) and DB Marcus Sayles (B.C.) in the secondary and DT Drake Nevis and DE Craig Roh (Tor). The Bombers used Steven Richardson in a rotation with Nevis at tackle, so that loss is mitigated to some extent. 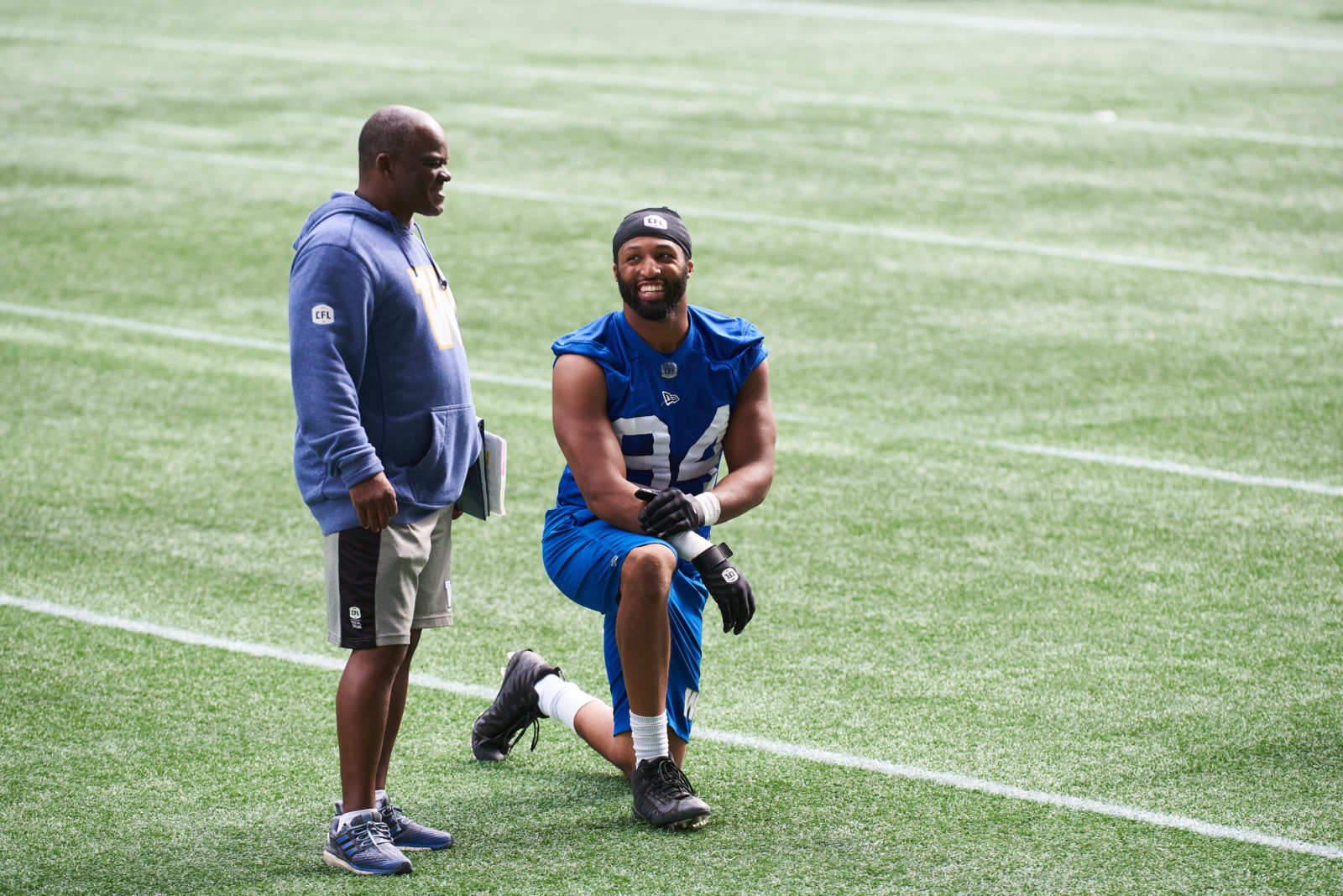 We usually trot out this narrative following a bye week. Does a week off help the body heal, or can a player get rusty with time off? Well, there are bye weeks and then there are bye years as the CFL missed all of 2020.

How they all come back from that much time off will be a fascinating sidebar to the 2021 season.

It’s an issue that won’t go away until Zach Collaros can stay on the field consistently, but let’s instead spin this and look at the possibilities with the veteran pivot getting a full training camp. Collaros was sensational at the end of 2019, especially given the circumstances of being parachuted in at the trade deadline and then taking a crash course on the offence. In his four starts – all wins, three in the playoffs – he threw for a modest 851 yards, but had four touchdowns against just one interception and solid QB-efficiency rating of 105.6.

He’s working in an offence that features the best offensive line in the CFL in front of him, a three-time rushing champ behind him and a solid receiving corps around him.

Related to the above: Collaros appeared in only two regular-season games in 2019 – opening the season as Saskatchewan’s starter before a cheap-shot hit on the first series sent him to the sidelines. He was then traded twice – to Toronto and then Winnipeg – before getting back behind centre.

Sean McGuire is listed as No. 2 on the Bombers depth chart and despite the club’s faith in his skillset, he has exactly three pass attempts to his name in live action. Behind him are rookies Dalton Sneed and Dru Brown.

Does this leave the Bombers vulnerable? Well, sure, just like any team that loses its starting QB. Still, consider this: before the 2019 season started Cody Fajardo had thrown all of 68 passes and Saskatchewan was his third CFL team before he became an emerging star. Nick Arbuckle had thrown 25 passes before he got his shot in Calgary after Bo Levi Mitchell was injured and Dane Evans had just 48 pass attempts in Hamilton before Jeremiah Masoli was lost for the season. Evans stepped in and led Hamilton to the Grey Cup.

All those players needed was an opportunity. 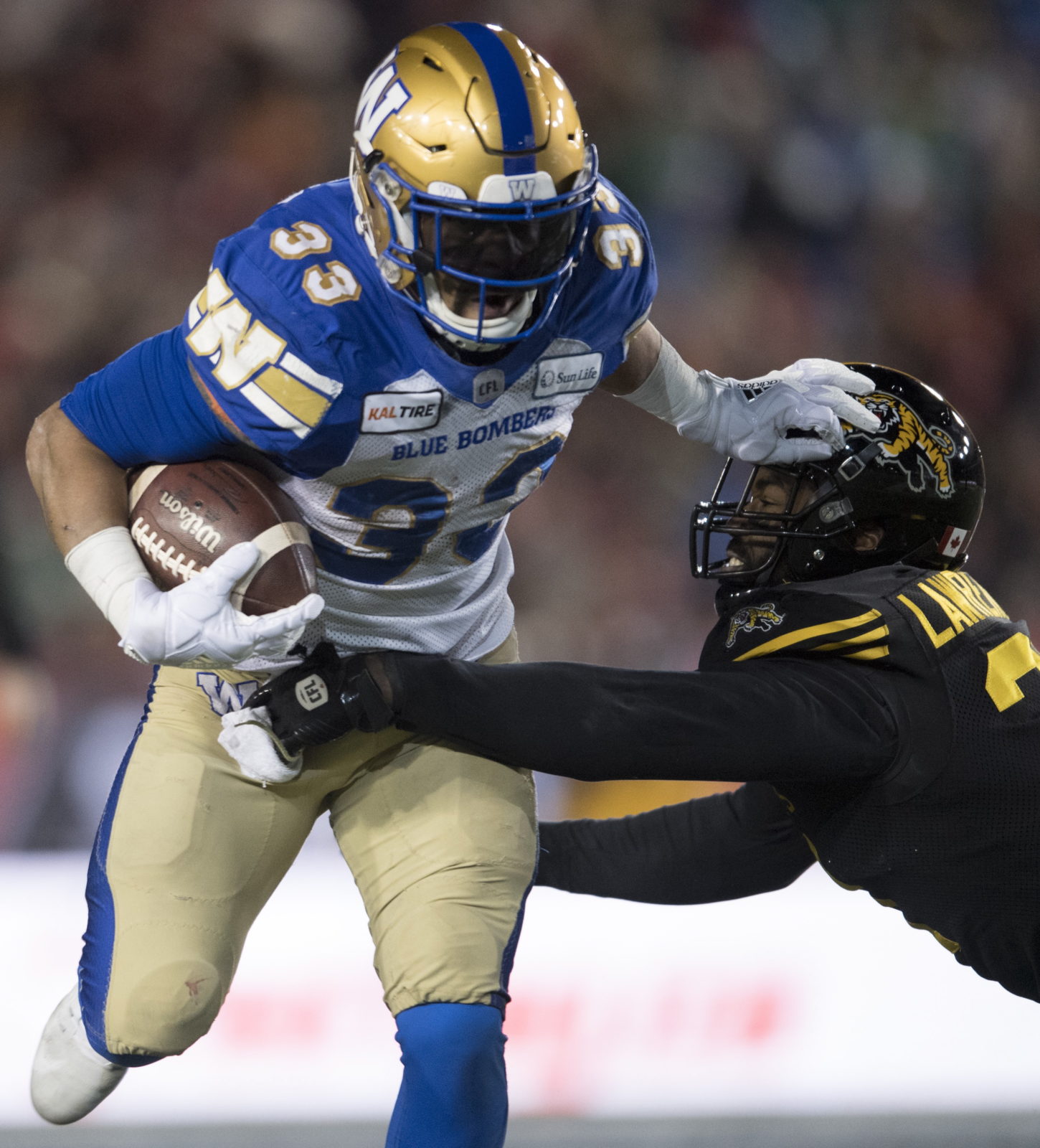 Over his last four seasons – all as a Blue Bomber – Andrew Harris has rushed 848 times for 4,779 yards, winning three CFL rushing title, and pulled in 300 passes for 2,468 yards and scored 31 touchdowns. That is a ton of touches.

Now 34 and with a year off, can Harris still be a game-changer? It’s a good question. Still, worth noting here is the last running back to win four consecutive CFL rushing titles was Mike Pringle of the Montreal Alouettes from 1997-2000. His age when he won his fourth straight? Try 33.

The Bombers biggest roster spot to replace is at kicker, where rookie Marc Liegghio steps in for future hall of famer Justin Medlock. It’s a tall order, but in selecting Liegghio in last year’s draft, GM Kyle Walters suggested he was the best kicking prospect to be available in years. Without preseason games, he won’t be truly tested until the home opener on August 5th.

CHANGES IN THE SECONDARY

Gone are CFL All-Star cornerback Winston Rose (Cincinnati) and West Division All-Star Marcus Sayles (B.C.), meaning the one side of the Bombers secondary will be brand new. The club has brought in veteran Josh Johnson as an option, but has also loaded up its camp roster with a swack of DB prospects. No position group undergoes more changes annually than this crew, and 2021 will be no different.

But as Mercy Maston and Nick Taylor proved down the stretch in 2019, experience matters, too – especially in a season with no preseason games and a condensed schedule.

We all know the Bombers love to go old-school and pound the football. And they’ve got Grey Cup rings as proof to the value of controlling the line of scrimmage and riding Andrew Harris.

Still, if you could augment that with more big plays through the air the Bombers become that much more difficult to defend week to week. Winnipeg’s passing numbers were at the bottom of the league in ’19, no doubt the byproduct of having three different quarterbacks behind centre throughout the year.

New offensive coordinator Buck Pierce will have the entire receiving corps back from the Grey Cup and some intriguing new pieces to potentially add to the arsenal.