The CFL playoffs can offer up a healthy dose of both heartache and joyful moments. After all, they have been dubbed ‘sudden death’ – or sudden victory, for that matter – due to the pain and celebration that comes with the magnitude of games played at this point in the three-down calendar.

In our last Top 10 list we looked at memorable wins by the Bombers in semi-finals. This week, a step further with the Top 10 Division Final wins.

Just like last week – when we listed the 2019 West Semi-Final win in Calgary as No. 1 on our list – we’re not trotting this one out simply because it is the most recent Bomber victory in a division final.

There were so many subplots which made this one special, including it being the first Prairie showdown for the West Division crown since 1972. The Bombers edged the Riders 20-13 in a wildly entertaining game that featured a return of Zach Collaros to Regina, a dominant performance by the Winnipeg defence and a timely pass off the crossbar to send the guys in blue and gold to the Grey Cup.

‘Epic’ only begins to describe it.

The game was a sellout, with 59,421 fans packing into B.C. Place and making it the seventh-largest crowd the Bombers have played in front of in franchise history. Tom Clements threw for three touchdowns in the win over the Lions, earning the Bombers their first trip to the Grey Cup since a loss to Hamilton in the 1965 ‘Wind Bowl.’

The Bombers were the defending Grey Cup champs in 1961 and would finish the ’62 season with their fourth championship in five years. But it wasn’t easy to get to the Grey Cup. Winnipeg finished first in the West with an 11-5 record and faced Calgary in the best-of-three division final. The Bombers dropped the first game in Calgary 20-14, but then took both games at home, winning 19-11 and then 12-7 three days later. By the way… three playoff games in one week back then.

The Bombers had fallen to Hamilton in the 1957 Grey Cup and were itching to get back for another crack at the club’s first title since 1941. Winnipeg opened the best-of-three with a 30-7 win in Edmonton, but then fell by the exact same score at home in Game 2. In the decisive third game the Bombers churned out a 23-7 win.

The Bombers finished first in the West and played host to the East Final in front of over 29,000 at Winnipeg Stadium. Quarterback Tom Burgess marched the Bombers 49 yards in 40 seconds – including a 31-yard run by the QB himself – to set up Trevor Kennerd’s 31-yard game-winning field goal with no time remaining.

The Winnipegs knocked off the Bronks – as Calgary’s squad was known then – en route to winning the Grey Cup on December 7th in a 18-12 victory over the Hamilton Tigers.

The headline in The Winnipeg Tribune after the West Final victory: “Calgary Fumble Helps Local Machine to 7-0 Victory in Grim Duel”

Russ Rebholz scored the game’s only TD after a Calgary fumble, thrilling a crowd of 1,500. 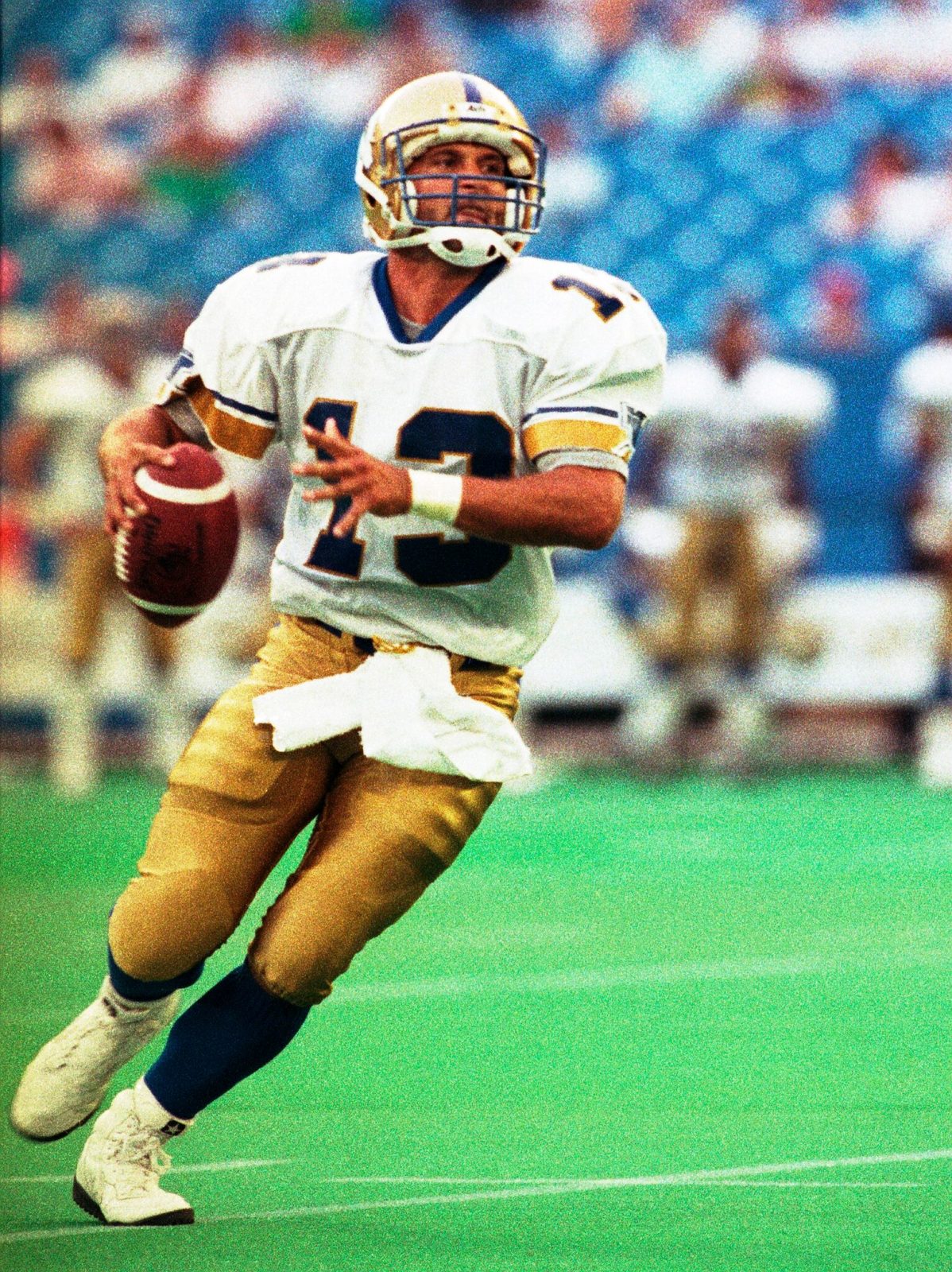 The Bombers upset the heavily-favoured Argos in the last game played at Exhibition Stadium before Toronto moved into SkyDome the following season. Toronto had finished 14-4 that year and was first in both offence and defence. But Winnipeg held the Argos to just 112 yards offence and a week later became the first .500 club to win the Grey Cup with a 22-21 victory over the B.C. Lions

Total domination for the Bombers, who won the best-of-three West Final with 14-1 and 43-14 victories. Gerry James was the star in the first game, who scored 13 of Winnipeg’s 14 points in a vicious wind in Calgary. And in Game #2 the Bombers built a 43-0 lead before easing off the gas pedal. Leo Lewis had two TDs, with Ernie Pitts, Farrell Funston and Frank Rigney each adding one of their own.

The Bombers did not win the Grey Cup in 1992 – they fell to Doug Flutie and the Calgary Stampeders in the championship – but their East Final victory was one of the biggest beat downs in CFL history. The 48-point differential represents the largest margin of victory in franchise history and second all-time in the CFL annals – only Edmonton’s 68-7 thrashing of the Bombers in a 1996 playoff game was greater.

Michael Richardson rushed for 227 yards in the game, while James West had three of Winnipeg’s nine quarterback sacks.

Winnipeg was full credit for the win in Toronto, getting a punt-return TD from Keith Stokes and 97 yards rushing from Charles Roberts. But late in the game QB Kevin Glenn dove on a loose ball after a fumble near the Argo goal line and suffered a broken arm.

A week later rookie Ryan Dinwiddie, making his first start, was the Bombers No. 1 QB and the club couldn’t overcome his inexperience and turnovers in a 23-19 loss to Saskatchewan in the Grey Cup.