His invitation came late, just a few days before the opening of the Winnipeg Blue Bombers training camp back in 2018.

Still, that’s all Johnny Augustine wanted back then: one more chance to show something, especially after not being drafted and getting a kinda-interested look from Edmonton in 2018 before being signed by Saskatchewan the following winter, but then being released before camp.

Maybe that, in part, explains why Augustine ran so hard that spring for the Blue Bombers. Not just in the preseason, but on every single rep, every single day. Fast forward four years and nothing has changed for the University of Guelph product, who officially put his name on a two-year contract with the Blue Bombers on Thursday.

He still runs downhill, as if every yard gained could not only earn him another opportunity whether it’s carrying the ball or doing the dirty work on special teams. 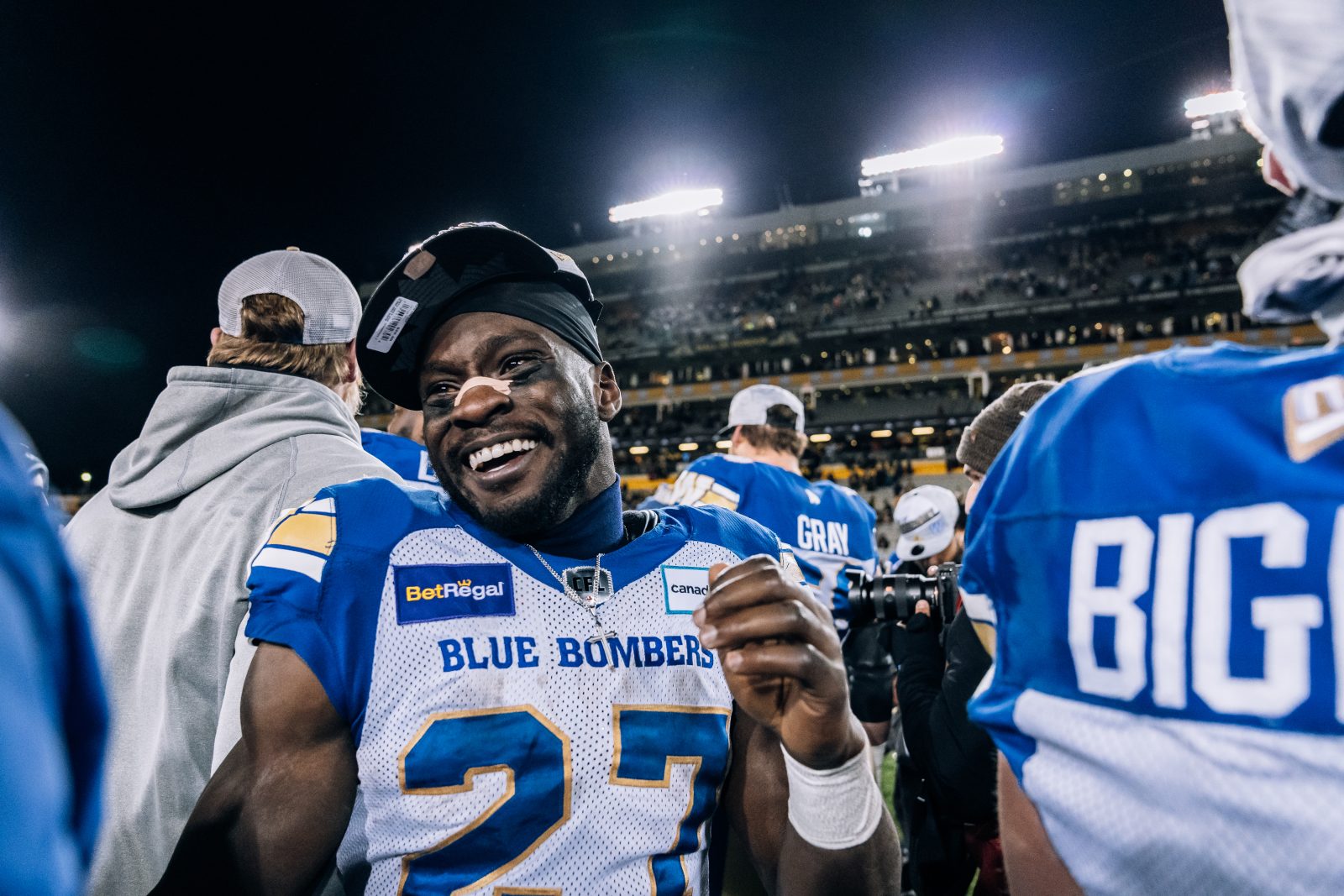 “Going through all of that, that’s why I’m so grateful,” began Augustine during a chat with bluebombers.com. “This is the team that gave me a chance to be in the league. This is where I’ve been able to display my talents and I’m thankful for that.

“These last few days before signing have been a little stressful, I’m not going to lie. But it was a good stress. I knew this time around there were more opportunities (in free agency) compared to other years. There were a lot of factors I had to consider before finalizing things.

“But when I did my Xs and Os on this it came down to the fact that I’ve been here the last three-four years and what we have is special. I love Coach O’Shea and the locker room so much… it would have just been so hard for me to leave. I’m just grateful right now to be back and at the end of the day this is where I wanted to be.”

Augustine was part of the Blue Bombers three-headed Canadian running back beast in 2021 along with Andrew Harris and Brady Oliveira. All three made starts last year and combined for 1,337 yards, with Harris finishing fifth in the league in rushing with 623 yards in seven starts; Oliveira 9th with 429 yards in six starts and Augustine 16th with 285 yards, including a 148-yard effort in his one start in the regular season finale in Calgary. 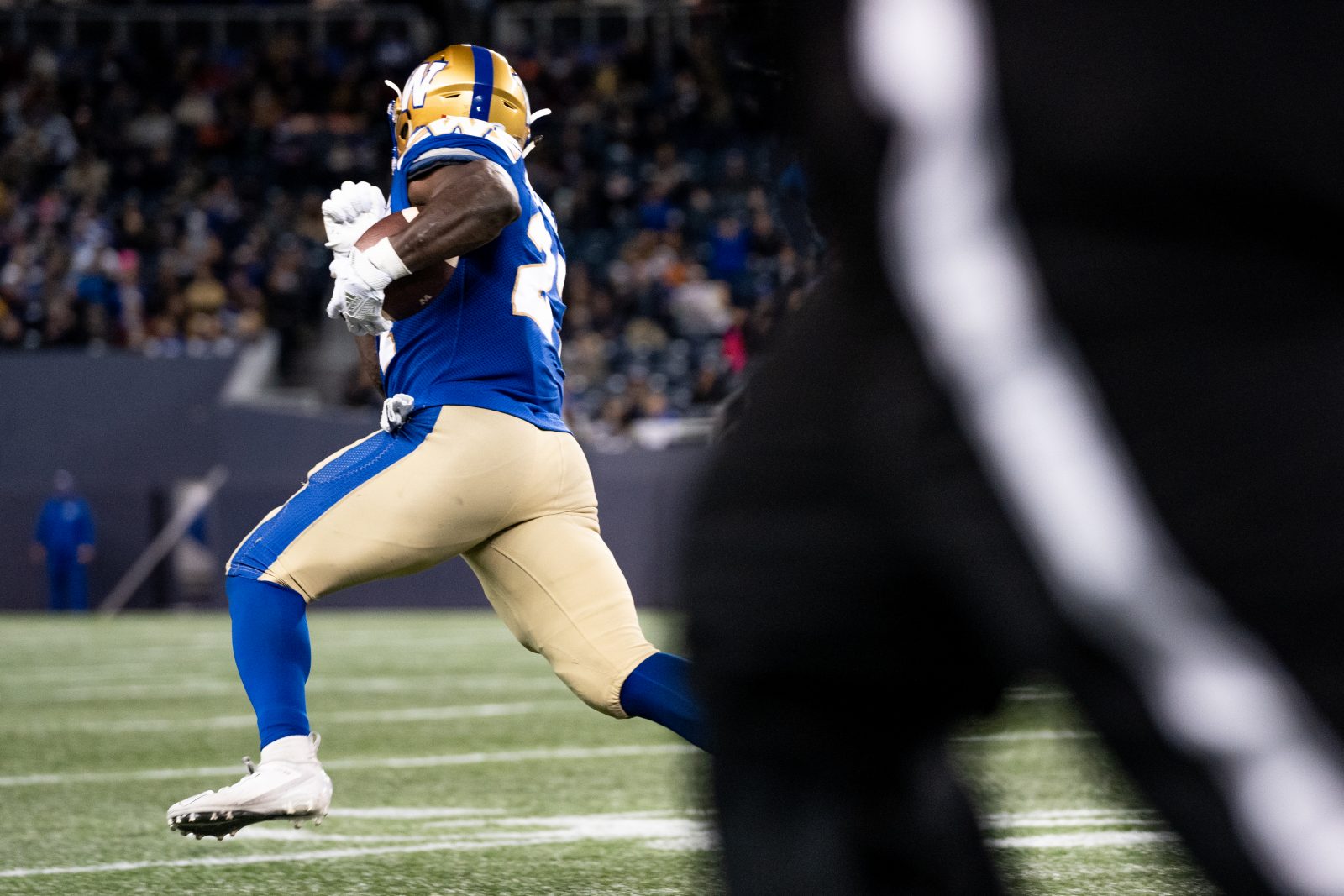 As of right now, Augustine is the only one of the three under contract with both Harris and Oliveira inching closer to the opening of the free agent market next week. Yet Augustine has also been around professional football long enough to know this: the names on a depth chart in February will mean little when Blue Bombers open training camp in the spring.

“I’m not too focused or caught up on that stuff,” Augustine said. “At the end of the day when I show up at camp whoever is next to me or whoever is not next to me, I’m just going to focus on myself and make sure I’m ready to help the team out in whatever capacity I can. Hopefully that’s running the ball a lot more.

“Competition only makes you better. I’m just a guy who focuses on myself; I can’t control what others do.”

Augustine has certainly grown his game since his first camp here in 2018, working to improve his skills as a receiver while also finding a role on special teams after barely playing on any of those units during his college days.

“A big part of that is having our head coach that is a big special teams believer,” said Augustine. “But it’s also having to start at the bottom and work my way up while knowing my role and understanding that. I wanted to be the best at my role.

“Over the years I can now say I take pride in playing special teams in this beautiful three-down league as well as run and catch the ball.” 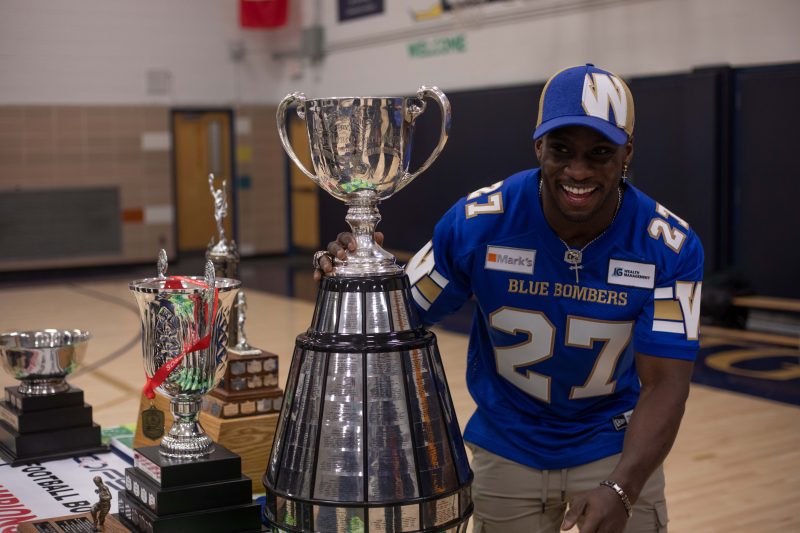 Augustine, who works in real estate in the Guelph, Kitchener, Waterloo area in the offseason, recently had his day with the Grey Cup. He already has his name engraved on the trophy from the 2019 championship and it was seeing the power the trophy has with people when he took it to his old high school that also resonated when it came time to deciding on returning to Winnipeg.

“That day with the cup meant a lot,” he said. ““It’s humbling to hear people say, ‘Oh wow… your name is engraved on it?!’ Those kind of things, those memories are for a lifetime.

“It’s funny…  went to pick up pizza for a party at a place where I live – Mario’s Pizza in Welland – and I brought the trophy in and some guy goes. ‘Is that the Grey Cup trophy??’ He was in shock. That’s how powerful that trophy is and what it means to the league. It means a lot to me, too. It’s a very special thing.”