The Winnipeg Blue Bombers are taking a small but important step forward in the spirt of Orange Shirt Day and in the wake of the first National Day for Truth and Reconciliation. The Bombers unveiled special orange New Era jerseys they will wear in the pre-game warm-up this Friday against the Edmonton Elks – who will be showcasing their own orange version – which will be then be made available in an online auction after the game with the funds raised going to each team’s charity of choice.

That marks a first for the Canadian Football League, with the Bombers having chosen Winnipeg Aboriginal Sport Achievement Centre as their charity. WASAC is foundation which helps to remove barriers for thousands of children annually and is Canada’s largest employer for Indigenous youth. The Elks, meanwhile, will be donating proceeds to Spirit North, a national charitable organization ‘dedicated to improving the health and wellness of Indigenous youth through the transformative power of sport and play.’

In addition, with the support of Exchange Income Corporation 1,000 members of 80 different Indigenous communities from Manitoba, Nunavut and Northern Ontario will attend Friday’s game and receive orange hoodies featuring the Bombers iconic ‘W’ logo. EIC is covering all the costs, including airfare and hotel accommodation. 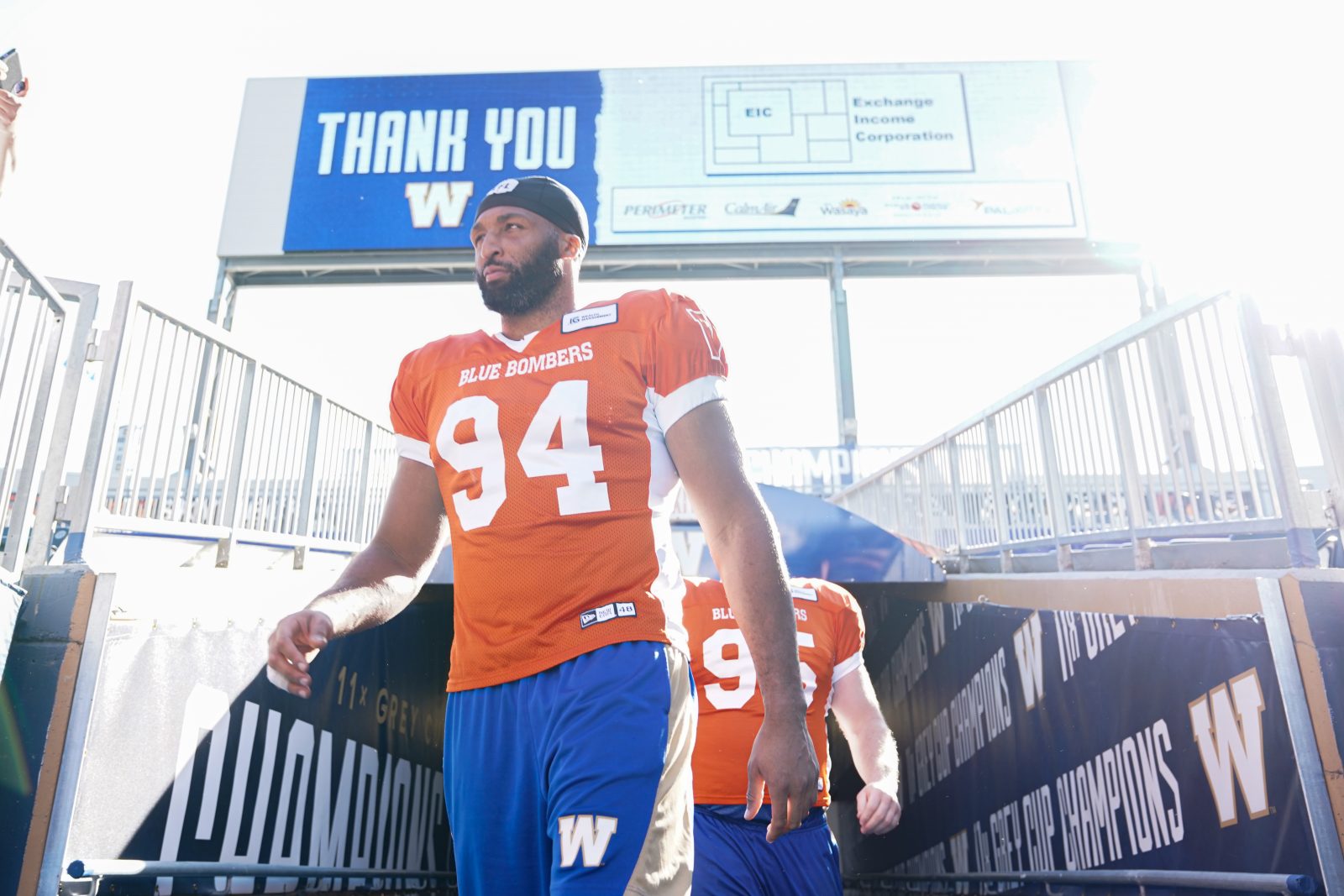 “It is through initiatives like this where people choose to be true allies, true partners, that will forge a path forward, that all of us will be able to work together in a healing way,” said Arlen Dumas, the Grand Chief of the Assembly of Manitoba Chiefs at a media event Tuesday.

“I just want to acknowledge all those people, all those allies, the people who make these very important efforts like the raising of the Treaty 1 flag in this very stadium. These things are very meaningful and very powerful. I can tell you from someone, in my experience, who having had to deal with systemic racism and discrimination all my life, I was very proud to be here in this stadium for the raising of the Treaty 1 flag and hearing the thousands of people cheer for that. That was a moment in my lifetime I never thought would have been possible. We have a lot of work we still need to do, but I am appreciate of  these efforts and the steps we have taken.”

Dumas said he received a phone call from Winnipeg Football Club President and CEO Wade Miller after the discovery of 215 unmarked graves in B.C. this past summer asking what the organization could do in acknowledgement. The club already had in place a program where Indigenous youth were flown in for a Blue Bombers game dating back to 2017, has made trips with players up north visit various communities and established the Jack Jacobs scholarship through the support of Eagle Vision. 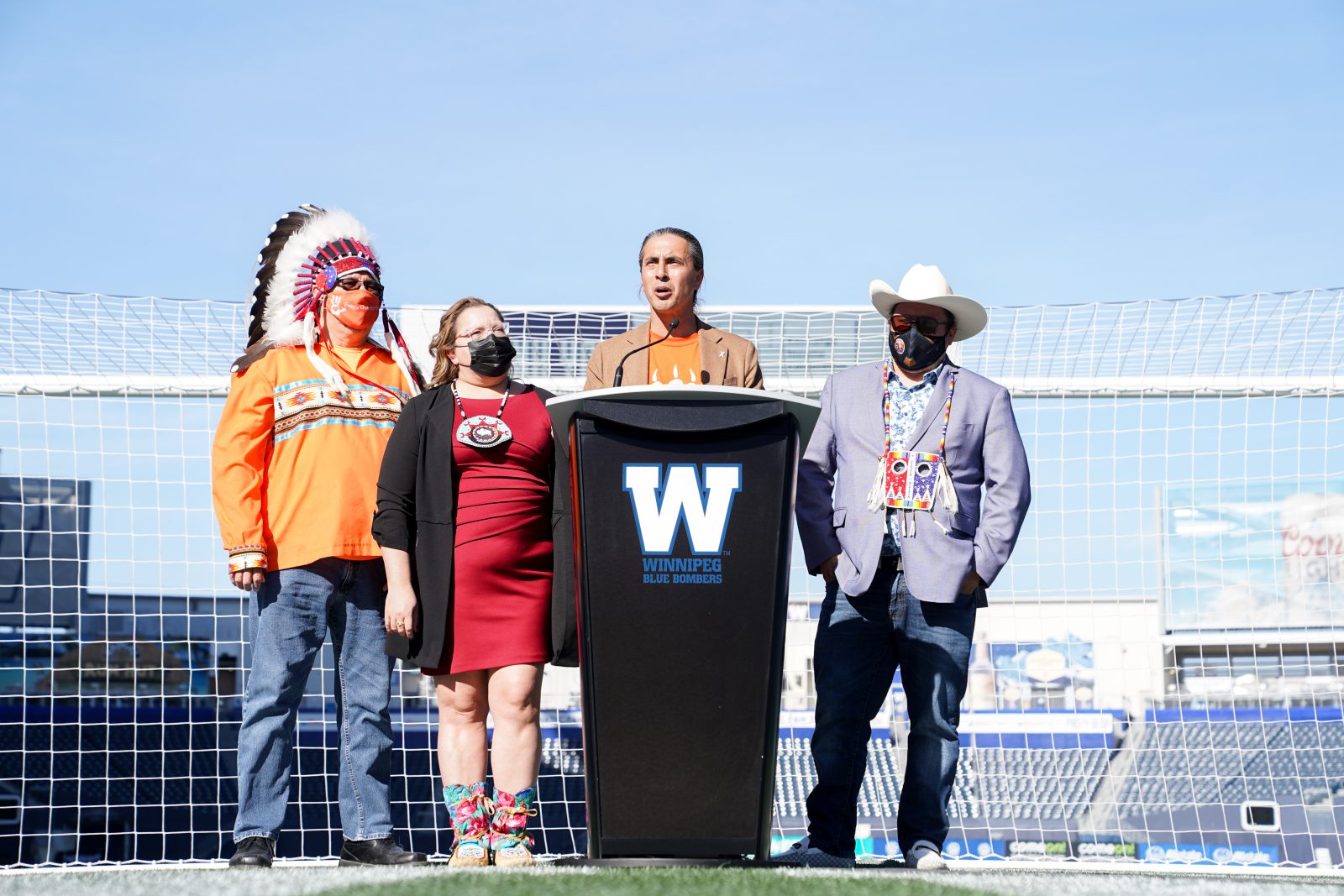 But with the support of EIC and others that effort is being cranked up with the 1,000 scheduled to be in attendance on Friday.

“This goes back to the Truth and Reconciliation Commission and what professional sports teams can do,” said Miller. “We started that by being the first professional sports franchise to acknowledge a land statement. This year with the Kickoff Event with the CPL (Canadian Premier League) we acknowledged what happened at the residential schools and then had a private ceremony with the (Treaty 1) flag raising. This is the right thing to do and we’ve got ability to do it.

“What Carmele (Peter, President of Exchange Income Corporation) said is exactly right,” added Miller. “(The kids who attend the game) have never seen anything like this. Some of them have never been in an elevator, never been in a hotel… things we all take for granted. It’s the little things we’ve done all our lives that we can’t comprehend and understand.”