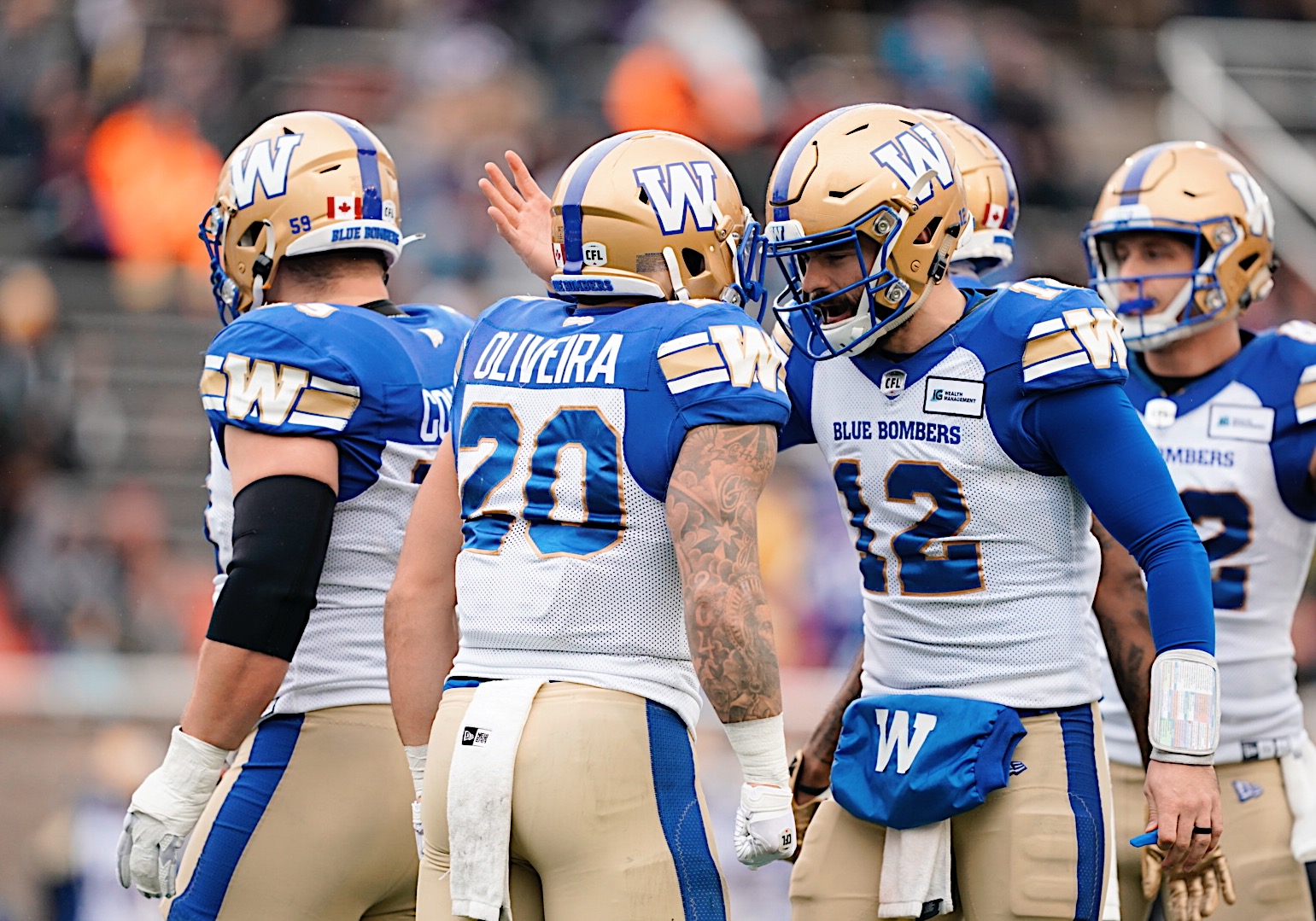 5 Quick Hits from the Bombers loss to the Alouettes Saturday afternoon here in Montreal….

1. OPENING THOUGHTS: It wasn’t at all unexpected, especially given a Winnipeg Blue Bombers lineup that was without nine starters, with a quarterback making his first professional start and a constant rain that just made the day that much more miserable.
Fielding a lineup that was without — inhale here — quarterback Zach Collaros, running back Andrew Harris, offensive linemen Stanley Bryant and Pat Neufeld, defensive linemen Jackson Jeffcoat and Steven Richardson, defensive backs Nick Taylor, Deatrick Nichols, and Brandon Alexander, the Bombers had their nine-game winning streak snapped  in a 28-14 loss to the Montreal Alouettes at Molson Stadium Saturday afternoon.
The result has no impact on the Bombers in the standings — they’ll still finish first in the West Division and host the Western Final on December 5th — but they do drop to 11-2. Montreal, meanwhile, improved to 7-6 and remains in the fight for a home playoff date in the East Division.
What will be interesting now is if the loss impacts the decision making regarding the roster leading up to next week’s regular-season finale in Calgary against the Stampeders as the club certainly won’t want to enter the playoffs on a

2. QB NUMBERS: Sean McGuire got the start at QB for the Bombers in place of Collaros, who remained in Winnipeg, and  struggled to find any rhythm as the offence could not consistently stay on the field. The second-year pivot completed 11 of 27 passes for 149 yards with one TD and four interceptions. McGuire did find some life on one series the fourth quarter, connecting with Kenny Lawler for a 42-yard gain and then Darvin Adams for a 30-yard TD strike on consecutive throws. But that was followed up with interceptions on three consecutive series.

3. ANOTHER STREAK ENDS: The Bombers surrendered their first fourth-quarter touchdown of the year on a Trevor Harris to Reggie White, Jr. eight-yard TD, that score coming after Shaq Cooper fumbled a punt that was recovered by the Alouettes on the Winnipeg 46-yard line. Cooper, who was replacing Janarion Grant on special teams, struggled in the return game.
The Als added a David Cote field goal with 1:53 left.
Even with that, the Bombers have still out-scored their opponents 123-16 this season.

4. A COUPLE OF BRIGHT SPOTS: The game started off marvellously for the Bombers with Redha Kramdi batting a fumbled ball out of bounds on the opening kickoff. That set up Winnipeg on Montreal’s 19 yard-line and the turnover was capped by a Brady Oliveira TD run.

The Bombers managed three sacks, two by Jonathan Kongbo and a third by Ricky Walker.

5. FYI: The Bombers inactive player was LT Stanley Bryant, breaking his consecutive games streak for Winnipeg at 102. Bryant isn’t injured and was replaced by Drew Richmond, who did not finish the game after injuring his knee in the first quarter. Also injured was DB Noah Hallett.. The Bombers had a four-game win streak on the road snapped and are now 4-2 away from IG Field this season… Nic Demski had one catch for four yards, extending his consecutive games streak with at least one catch to 23.