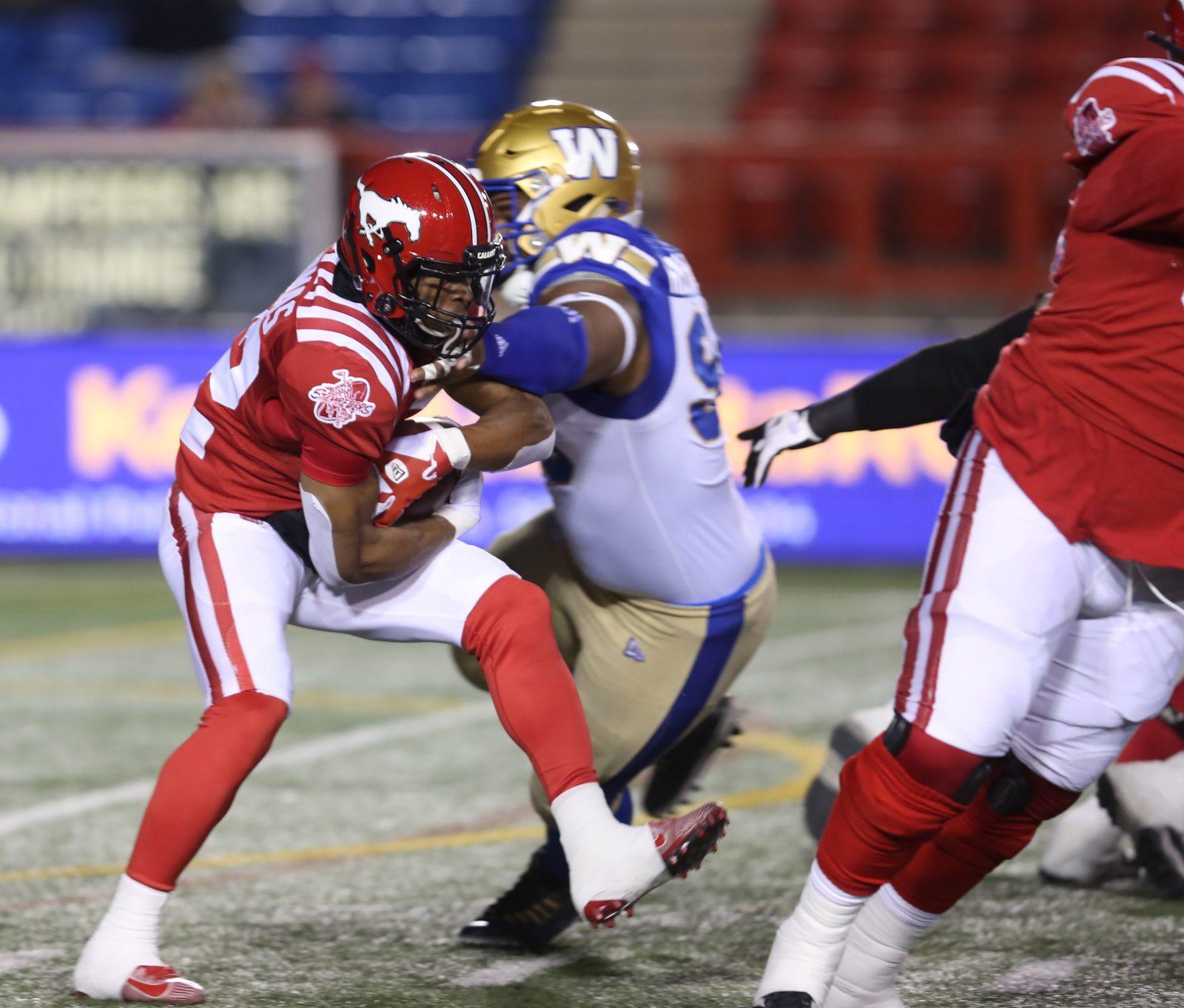 5 Quick Hits from the Bombers loss to the Stampeders Saturday from here in Calgary….

1. OPENING THOUGHTS: They came, they saw, they struggled through a meaningless fourth-quarter meltdown… and then the Winnipeg Blue Bombers quickly got the hell out of dodge.
The Bombers wrapped up their 2021 Canadian Football League regular season with a 13-12 loss to the Calgary Stampeders Saturday night in front of an announced crowd of 19,103 at McMahon Stadium — Winnipeg’s first visit to Southern Alberta since capturing the 107th Grey Cup on November 24, 2019.
The Bombers carried a 12-0 lead into the fourth quarter, but couldn’t lock up the ‘W’ as Calgary rallied and ultimately sealed the deal with a 27-yard field goal on the last play for the victory.
The result means the Bombers finish the season 11-3. The club will now have a bye in the first round of the playoffs before hosting the Western Final at IG Field on December 5th.
The Stamps, already locked into third place in the division, improve to 8-6 and will be in Regina next Sunday to face the Saskatchewan Roughriders in the Western Semi-final.

2. QB WATCH: The Bombers accomplished what they wanted with respect to Zach Collaros, getting him some game snaps after he missed last week’s game in Montreal and getting him out of the game without an injury.
The Bombers Most Outstanding Player and the leading contender for CFL MOP honours was behind for four series in the first half before giving way to Dru Brown. Collaros finished 7-of-10 for 73 yards and essentially led what would have been two scoring drives, but exiting with the Bombers up 3-0 on a Sergio Castillo 15-yard field goal.
On what have been the first scoring drive Collaros connected with Rasheed Bailey for 39 yards as part of series that set the Bombers up with a first and goal on the Calgary two-yard line. Unfortunately, after Brown rushed for a first down he fumbled while attempting a pass, with the mistake gobbled up by the Stampeders.
Brown had a few moments after that, especially running, although his numbers weren’t jaw-dropping as he finishing the night 7-of-14 for 49 yards while rushing seven times for 44 yards.

3. KUDOS TO….:
-With both Andrew Harris and Brady Oliveira on the shelf, Johnny Augustine was sensational for the Bombers, rushing for 148 yards on 22 carries and pulling in one pass.

-Kenny Lawler finished with four catches for 41 yards to push him over 1,000-yards receiving for the first time in his career. Lawler finished the year with 64 receptions for 1,014 yards and six TDs and, in the process, became the first Bomber to lead the league in receiving yards since Milt Stegall in 2002.

4. INJURY WATCH: The Bombers safety Brandon Alexander was injured late in the second quarter on a punt-cover play and, after being down for a few minutes, walked off the field under his own steam. There was no update on his status.

5. FYI: The Bombers inactive player was QB Sean McGuire… Winnipeg surrendered 10 points in the fourth quarter Saturday night, meaning they did not break the CFL record for fewest points in a quarter.
Oh, and this on a night that seemed a perfect preview of CFL playoff football: