1. THE HARRIS WATCH, PART 3: No news is… no news? Bombers RB Andrew Harris watched Friday’s practice after being listed as ‘limited’ in Thursday’s closed-to-the media session.
So, what does that mean in terms of his availability for Sunday?
“I’m not really interested in going through all the roster stuff,” said Bombers head coach Mike O’Shea. “It’s that time of year. We’ll give Andrew as much time as we can before we have to make a decision.”
If Harris can’t go, the Bombers would turn to Brady Oliveira and Johnny Augustine, both of whom had 100-yard rushing games this year and finished in the Top 20 in CFL rushing.
“I’m confident in any running back we put back there — Johnny, Brady, Nic, Andrew, Zach…,” said Bombers all-star right tackle Jermarcus Hardrick. “Whoever runs the ball, my job is to make sure they’re clean and my job is to get in there and get nasty and physical. I’m excited for anybody who gets to run the ball. Johnny, Andrew, Brady all bring something different, but they all bring something.
“It’s a great feeling any time you have multiple guys carrying the load.”
Harris (623), Oliveira (429) and Augustine (285) combined for 1,337 yards rushing for the Bombers this year in just 14 games. 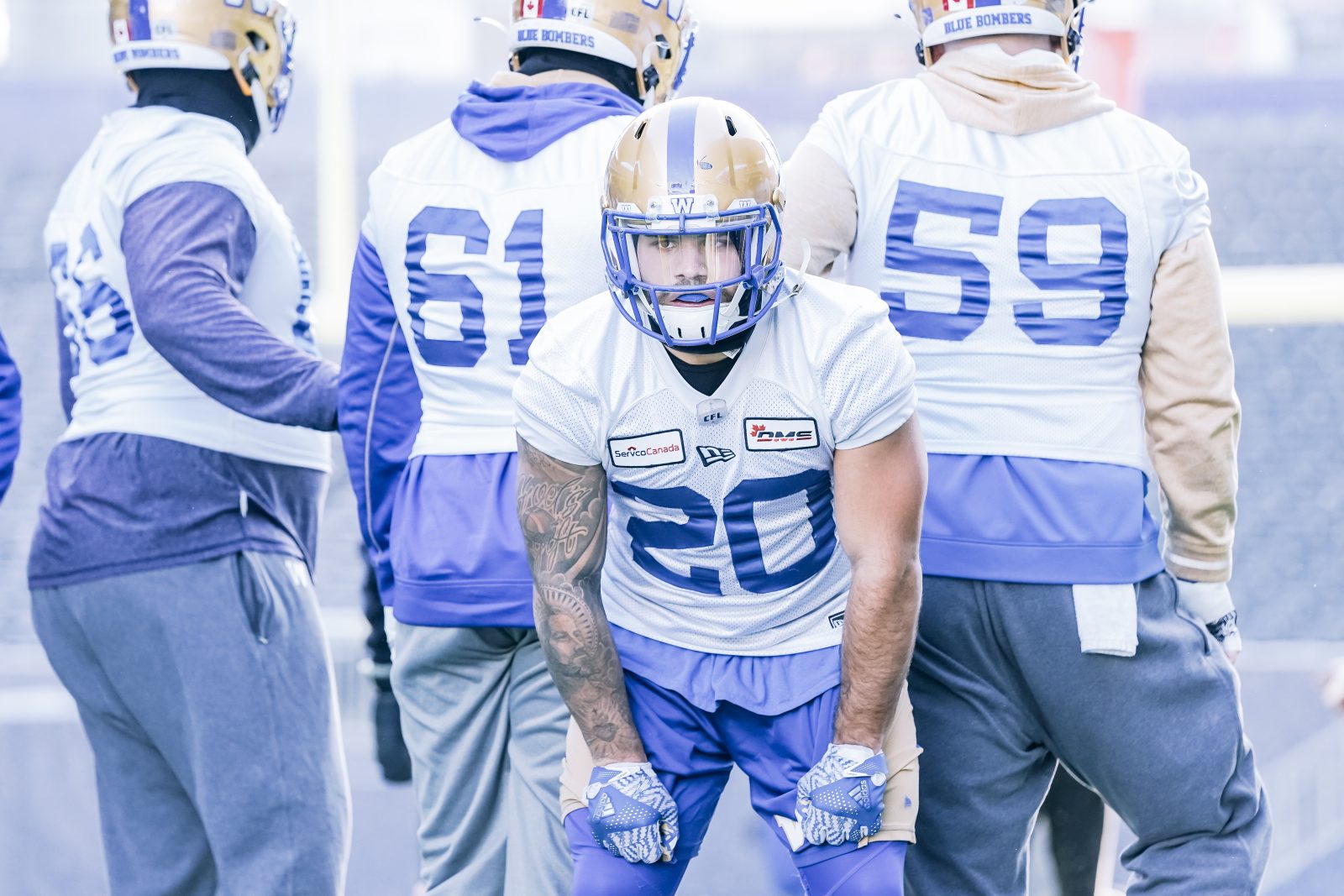 “It’s pretty special when you look at the running back room that we have here,” said Oliveira. “It’s a Canadian league, right? Having us all be Canadian, whenever our number is called, we go in there and execute. It just says a lot about all the work we put into this game and when we go in there we just really want to help the team win and help out where we can.
“We’re all very capable and we’ve all showed that. It’s super-exciting just to know we have so much depth. Across the board on all positions on this team we have great depth.”

2. INJURY REPORT: Today’s health report, understanding that Saturday is walk-through and again closed to the media:

3. GO TIME… ALMOST: The Bombers are coming off a bye in the first round of the playoffs and after having played three regular-season games after clinching first place in the West Division. So, to be this close… “This week went by very fast,” said O’Shea. “It was quick. It was good. Players want it, they want to get going.”
Asked to gauge what he saw from his club all week, he added: “I’ve seen a pretty standard set of practice days. I do like their consistency. Nothing’s perfect. They’ve got energy and there might be a period where it lulls a little bit, but that’s the same practice week over and over again. There’s points where the coaches would like things to be a little more crisp, and there’s points where they’re pretty happy with how crisp it is and I don’t think that changes from any normal week.”

4. SAME, BUT DIFFERENT: The Bombers will be facing a Roughrider receiving corps that will feature different faces than the crew they held in check in the Labour Day Classic and Banjo Bowl earlier this year. Saskatchewan was without Shaq Evans in those two games, and added veteran wideout Duke Williams in October.
Both men make the Riders passing attack that much more dangerous. 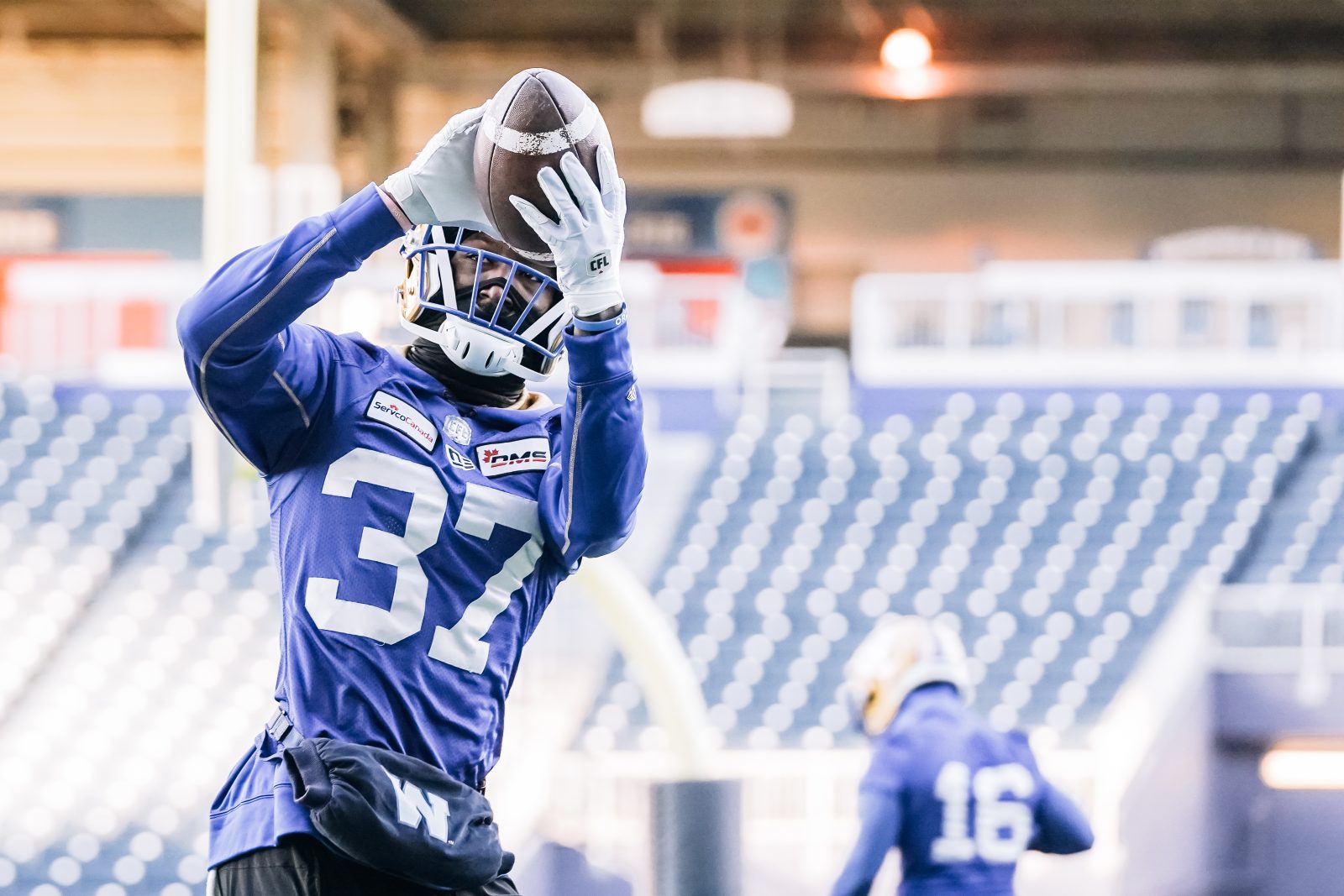 “I expect them to have a couple new wrinkles in their offence, a coupe new wrinkles in their special teams,” said Bombers safety Brandon Alexander. “But they can’t change everything that they do. I’m pretty sure they’re going to come out with some things they’ve been seeing on film that they feel they can hit. We’ve just got to be ready, be prepared. Those first 15 plays are stuff we’ll see that’s new, things that are a little bit different and then they’ll get back to who they are.
“We’ve just got to make sure we’re sound on our side and that we’ve got everything lined up and ready to go.”

5. BUST OUT THE ONE-IRON: Bombers punter Marc Liegghio will make his playoff debut in Sunday’s Western Final in what could be gusty conditions. And his approach to potentially kicking into a gale-force wind?
“We’ve been working on low drops, keeping a low trajectory with the ball… basically it’s hitting a one-iron,” said Liegghio. “You don’t want to get a lot of height on it otherwise the wind is going to affect it. It’s just trying to limit anything the wind could do to your kicks. I’ve been working on cold situations, wind situations… even if it’s not windy we were saying pretend there’s a wind in your face, keep it low and keep that one-iron swinging.”
Liegghio said his interest in golf really picked up during the lost 2020 CFL season and the similarities between kicking and swinging a club are many — a notion Justin Medlock often mentioned during his days here.
“From golfing to kicking it’s very similar… the natural swing, keeping your confidence, don’t try and kill the ball, let the club do the work, it’s basically all the same fundamentals,” he said. “It’s surprised me. Now when I watch the pros on TV it’s like, ‘How are these guys doing this? It’s amazing.’ Even watch pro kickers, watching Serge (Castillo) kick… he’s so natural. Ali (Mourtada) he’s got a big leg, a natural swing.
“It’s just a really cool thing to watch when I see that kind of stuff.”
Later, as Liegghio finished his interview session with the media he was applauded by long-snapper Mike Benson, along with Castillo and Mourtada, who had snuck into the back of the room to take in the proceedings.

Because that what a proud dad does. Great job on your big interview son @MarcLiegghio https://t.co/TMgq8h8tfN