5 Quick Hits from Wednesday — Day 1 of the Blue Bombers practice week leading up to Sunday’s matchup with the Calgary Stampeders at IG Field:

1. THE HARRIS WATCH: Blue Bomber RB and future hall of famer Andrew Harris was busy at practice on Wednesday and continues to see his workload increase. He shared reps with Brady Oliveira on the club’s first day of work since last Saturday’s loss to the Toronto Argonauts.
“He was limited today,” said Bombers head coach Mike O’Shea. “We’ll see tomorrow.”
Thursday’s practice, FYI, is closed to the media.
In any case, whether Harris returns this week or Brady Oliveira gets the call again the Bombers need to get their ground game established after rushing for just 85 yards over the last two games.
“Any time he’s out there on the field or bouncing around the locker room it’s a good thing for us offensively,” said Bombers QB Zach Collaros of Harris. “He’s a great guy to be out there with. He brings a lot of energy and obviously a lot of experience to the huddle. He’ll go down, I’m sure, as the best running back to ever play the game up here. Any time you can have him, just his presence, is helpful.”

2. THE GOAT: Several Bombers players and coaches were wearing blue T-shirts on Wednesday, featuring a gold goat and the number 24 — a salute to Mike Miller, who became the CFL’s all-time leader in special-teams tackles on the weekend.
Bombers head coach Mike O’Shea said the idea was fun ‘especially when (an unassuming an unsung hero like Miller) absolutely hates it, so it kinda makes for good fun around the room. 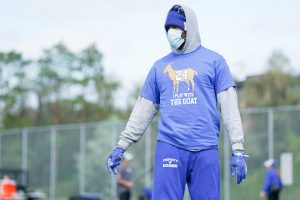 Added Collaros: “He’s an unbelievable football player and obviously everyone is so happy for him. It’s just an honour to be his teammate and watch him go to work every day.
“I told him I won’t call him ‘Goat’ any more or do the little (goat) sound thing. But these are pretty cool shirts. I’ll be wearing this for awhile.”

3. THE GOOD/BAD NUMBERS SPEAK FOR THEMSELVES: Bombers placekicker Tyler Crapigna needn’t be reminded of his struggles in the loss to Toronto — he missed from 37 and 47 yards — but he did answer questions following Wednesday’s practice.
“At the end of the day you’re paid to make field goals and obviously that didn’t happen in the game,” he said. “That’s last week, this is this week. New week, new game. I’m not really worried about what happened last week.”
Crapigna said on his first attempt his plant foot slipped and because the ball came out lower it was partially blocked. And on the 47-yarder…
“I thought I got a good hit on it, it was probably 10-15 yards deep in the end zone… it was maybe a foot left. At the end of the day you’re not going to pick that apart — foot left/foot right we’re not talking about this at all.
“I’ve been in these situations before. I’ve been in games in Sask where I’ve had bad games — I especially remember one on Labour Day — and come back and hit the next 18 field goals in a row. The same thing happened in Toronto where you go on a little bit of a streak as well. All I’m thinking about is making the next one, that’s all that really matters.”
Added O’Shea, in a show of support for Crapigna:
“I know if you’re going to kick in an 18-game season and have the number of opportunities that present themselves throughout an entire season he’s going to be an 85-86 per cent kicker. He got over-extended and slipped on one on the plant leg and right now you’re asking about a very small sample size. So, what do I believe about Tyler? I believe that through an 18-game season with a larger sample size he’s going to be in the mid-80s. That’s what I believe.”

4. FYI: The league announced its supplementary discipline after Week 3 action, with five players being fined. Not among them, it’s worth noting, was Bombers safety Brandon Alexander for his hit on Argos receiver DaVaris Daniels last Saturday.

5. ELKS SITUATION: The Edmonton Elks-Argos game scheduled for this Thursday has been postponed after positive COVID-19 tests with the Elks over the weekend. On Wednesday the team announced the total number of players/staff who have tested positive has now reached 12.
Asked to comment on what is unfolding in Edmonton, Bombers defensive end Jackson Jeffcoat said:
“I’ll be honest, I haven’t really looked too much into it and I don’t really know much about what’s going on there. I just know that here in Winnipeg our coaches and training staff are doing the most possible to make sure that we don’t have any COVID cases or spreading or anything like that. We’re making sure we’re keeping our masks on, we’re making sure that we are staying distanced when we need to be. Thats all I can say.”