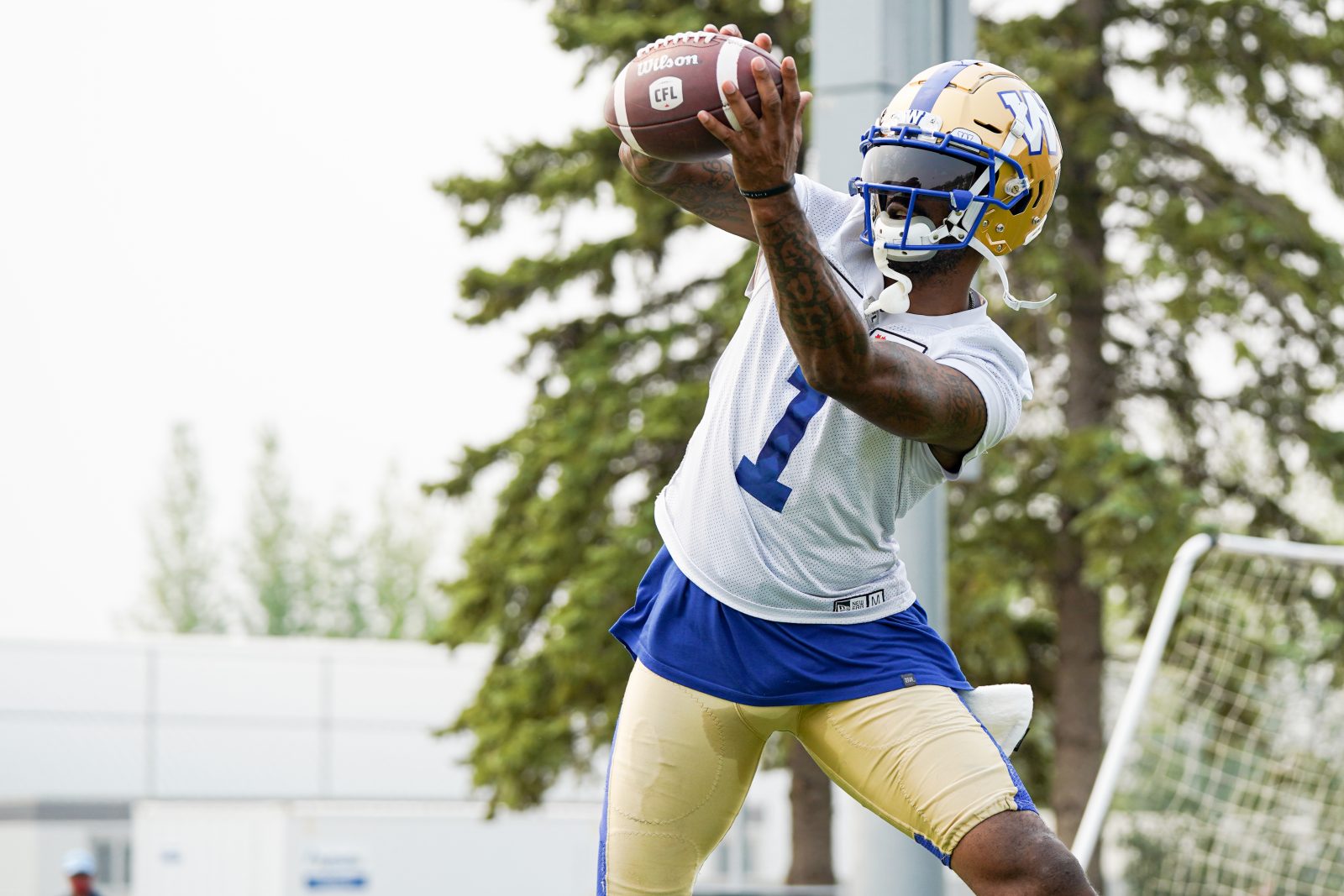 5 Quick Hits from Tuesday — Day 1 of the Blue Bombers practice week leading up to Saturday’s date with the Argos at BMO Field in Toronto:

1. OUCH UPDATES: The Bombers returned to the practice field today for the first time since last Friday’s win over the Argos and with WR Darvin Adams back working with the starting offence after missing the first two games of the season.
“I feel good. I’m excited just to be back out there with the guys, just to be in the huddle,” said Adams. “That (whether he plays this week) is not my call. I’m just going to be prepared in whatever we I can be and whatever coach says, that’s what we’ll do.”
Asked about the possibility of having Adams back this week, head coach Mike O’Shea said: “Darvin’s a pro. He’s been through this before and I’m sure he’ll be back at it as soon as he can.”
RB Andrew Harris, meanwhile, participated in some individual sessions and did some conditioning running, but it was still Brady Oliveira in the backfield.
O’Shea did say rookie DB Redha Kramdi was ‘hit from behind’ in the win over Toronto and will be out for a bit. Still on the mend are DT Steven Richardson, LBs Kyrie Wilson and Jontrell Rocquemore and DB Josh Johnson. A handful of other players were limited on Tuesday, but are still expected to suit up on Saturday.

2. COMINGS/GOINGS: The Bombers made a pair of roster moves on Tuesday, adding import linebacker Kevin Brown and releasing receiver Cam Meredith. A former star with the Chicago Bears, Meredith entered camp with high expectations, but was injured on the first weekend and did not get back on the practice field.
“He’s not ready to practice, so we need his spot on the practice roster for a guy that can run around out there and take some reps off other guys.” said O’Shea. “That’s all it really was. Cameron Meredith, we believe, is a very good football player. It’s just unfortunate we can’t utilize him right now. We’ll see going forward. We’ll see how long it takes for him to rehab.”
Brown, meanwhile, joins the Bombers after being released by the Edmonton Elks during training camp. He appeared in 42 games over three years with Ottawa, registering 112 tackles, three sacks and two interceptions.
“He’s productive. Had a bunch of tackles, a bunch of special-teams tackles, interceptions, forced fumbles,” O’Shea said. “He’s played the game, he’s just bringing some experience and shoring up a spot where we’ve got a couple injuries. It’s nice to bring in a guy who can step on the field right away and on special teams if you need him to and understands the systems and the game.”

3. FYI: Visiting the Bombers practice and meeting with the players on Tuesday was CFLPA Executive Director Brian Ramsay… DB Alden Darby, acquired from Toronto after the season-ending Achilles injury to Mercy Maston, was dinged in training camp after his arrival and has yet to see the field. Said O’Shea on the veteran DB: “We brought Alden in when there was a need for a veteran presence and then these guys stepped up and they’ve done fairly well. I know Alden, he’s always out there working hard and he’s always helping his teammates prepare. He’s sharing his veteran wisdom and then it’s just a matter of time to see how the roster goes. As with everybody who’s not getting the playing time that they want, they just keep working and keep being a pro.”… The Argos opened their practice week with QB Nick Arbuckle taking first-team reps. Head coach Ryan Dinwiddie said he’ll confirm his starting pivot on Wednesday.

4. STAY VIGILANT: The CFL has loosened some of the COVID-related protocols in place for fully-vaccinated players, coaches and staff for such things as outdoor practices and the ability to go to restaurants with other fully-vaccinated individuals.
“I still feel that we need to be careful,” said O’Shea. “Once again, I think I’ve said it about 10 times probably, it’s not about starting, it’s about making sure we’re able to finish and I do recognize the CFL has worked with the players’ association and the medical side to determine we can loosen some restrictions for vaccinated players. We’re encouraged by that.
We still have to make sure we’re getting as many people vaccinated as possible and as many Canadians vaccinated as possible so that we can fill stadiums and have a great season for everybody — the players, the fans.
“But it is encouraging. It allows a little more normalcy.”

5. WALKS SOFTLY AND CARRIES A BIG HIT: Veteran Bombers LB Jesse Briggs tends to shy away from the spotlight and often prefers not to do interviews. But he was solid in last week’s win over Toronto — his second career start — and spoke to the media on Tuesday.
Said Briggs of the Bombers ‘D’:
“We’ve played well together as a unit. The guys who have come in, the young guys that have stepped up have been fantastic. I think it’s pretty rare that you see a group of young guys come in and play the way they’ve played. There’s always stuff to clean up — we gave up 100-plus yards against the run last week. We’ve got some stuff to clean up, we’re improving and it’s just a matter of getting better every week.”