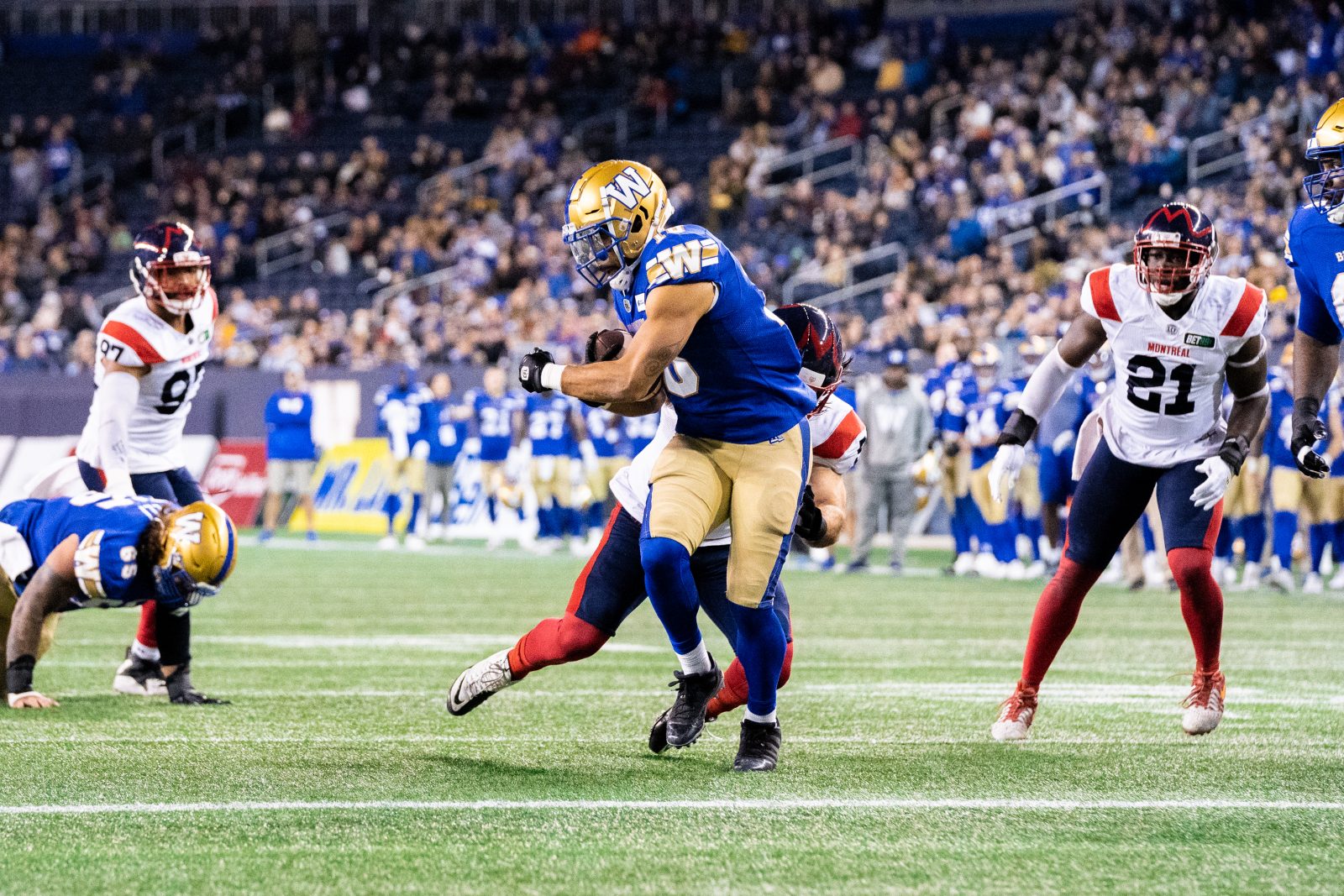 Quick Hits from Day 2 of Blue Bombers practice — a closed-to-the-media-session in advance of Saturday’s game in Calgary against the Stampeders:

A separate story on the winners will appear elsewhere on bluebombers.com soon. FYI, Bombers head coach Mike O’Shea had a vote on the awards, along with local members of The Football Reporters of Canada — Bob Irving, Jeff Hamilton, Ted Wyman and Darrin Bauming.
Asked for his thoughts on how tough it was selecting a defensive nominee, O’Shea chuckled and said:
“Listen, I’ll give you this: the way defensive guys are wired, the way you hope the whole team is wired, is this things come out at the exact wrong time — at the end of the year when you’re trying to focus on team and you’re taking the greatest team sport on earth and sticking individual accolades on people and on teammates.
“The fact is, from our defensive group there’s more than a handful of guys that could have easily been nominated from our team. I’m fortunate enough to get to witness these guys work every single day and it’s something to behold for sure.”
Big picture: all players love to get accolades and slaps on the back. And every single one of them would trade the individual honours for a Grey Cup ring.
“100 percent… you don’t win a Grey Cup (a season) is not a success even if you win MODP (Most Outstanding Defensive Player),” said Bighill. “That’s not what we’re here for. It’s icing on the cake, for sure, but when Grey Cup is played on December 12th that’s when you figure out if you’re going to be happy or not after that.”

2. BACK TO WORK: Bomber QB Zach Collaros was back at practice on Wednesday after his wife Nicole gave birth to their second daughter, Capri Sofia Collaros, Monday night.
“Everybody’s good,” said Collaros. “St. Boniface (Hospital) did a great job of taking care of us and my wife and my daughter are doing well.
“I’m sure any father that has been there for the delivery and everything leading up to it, there’s a lot of anxiety. My wife is amazing. I don’t want to go on and on here, but every time I think I can’t love her more than I already do… just watching that whole thing is amazing. We’ve got a beautiful little girl to add to our family.”
Collaros did not start last week’s loss in Montreal, but still ranks second in passing yardage and first in passing TDs, QB efficiency and completion percentage. Watching last week’s game — and waiting for the arrival of his daughter — made for a stressful weekend.
“It was tough, for sure,” he said. “There was a lot of pacing around the living room. With not knowing what the situation was with Nicole at the same time it made things a little more anxious. Then something came up with one of our little businesses we’ve got going on back home, so that distracted me from everything.
“It was tough to not be there. When you’re in it week in and week out since training camp with your teammates you just want to be there. You want to be out there with the guys. And Osh (Coach O’Shea) told me going into the week, especially with the family situation we had going on, ‘I’m going to take the decision out of your hands. You’re not going on the trip.’ So, I thank him for that.”

3. SO… WHAT’S NEXT?: The big question heading into this weekend’s game — of which the result won’t impact the Bombers spot atop the West Division or Calgary’s place as the third-place team — is how much time, if any, Collaros might see.
“We’re going to see how that goes,” said Collaros. “Today was my first day back in the building. I felt good at practice. Whatever Osh and Buck decide to do with us offensively, I’ll be ready for. Calgary is a great football team. It’s always good to go to McMahon and play a game.”
Here’s O’Shea when asked if he didn’t want Collaros to go three full weeks — including next week’s bye — before playing in the Western Final on December 5:
“Zach’s a little busy right now. Besides football he’s got his family to look after. We’re not at that point yet where we’ve had a good conversation about what we want this to look like for him and what he needs. Either way, Zach’s going to be good. The way he practices, like most of these guys, like most quarterbacks at this level, is they’ve got to treat practice and every rep in practice like it’s a game.
“They approach every rep seriously, so I do believe Zach would be fine if he did not play. We haven’t come to that conclusion yet.”

4. FYI: The selection of Alford as the Bombers Most Outstanding Rookie is a compelling story, seeing as he came to the club straight from Tusculum University and was part of a group of 27 defensive backs vying for work at training camp.

“It’s a rough journey. Not rough in a bad way, but I just had to work hard no matter what,” said Alford. “So it’s been a lot of hard work put into my craft in order to get awards like this. It’s just a journey, man, and a lot of hard work and believing in myself. It’s proving others wrong and just letting others know that no matter where you come from, what college you go to, it’s all about the work you put into your craft and you’ll be successful.

5. REPORT FROM SICK BAY: No specific updates from practice today as it was closed to the media. But here is today’s injury report: