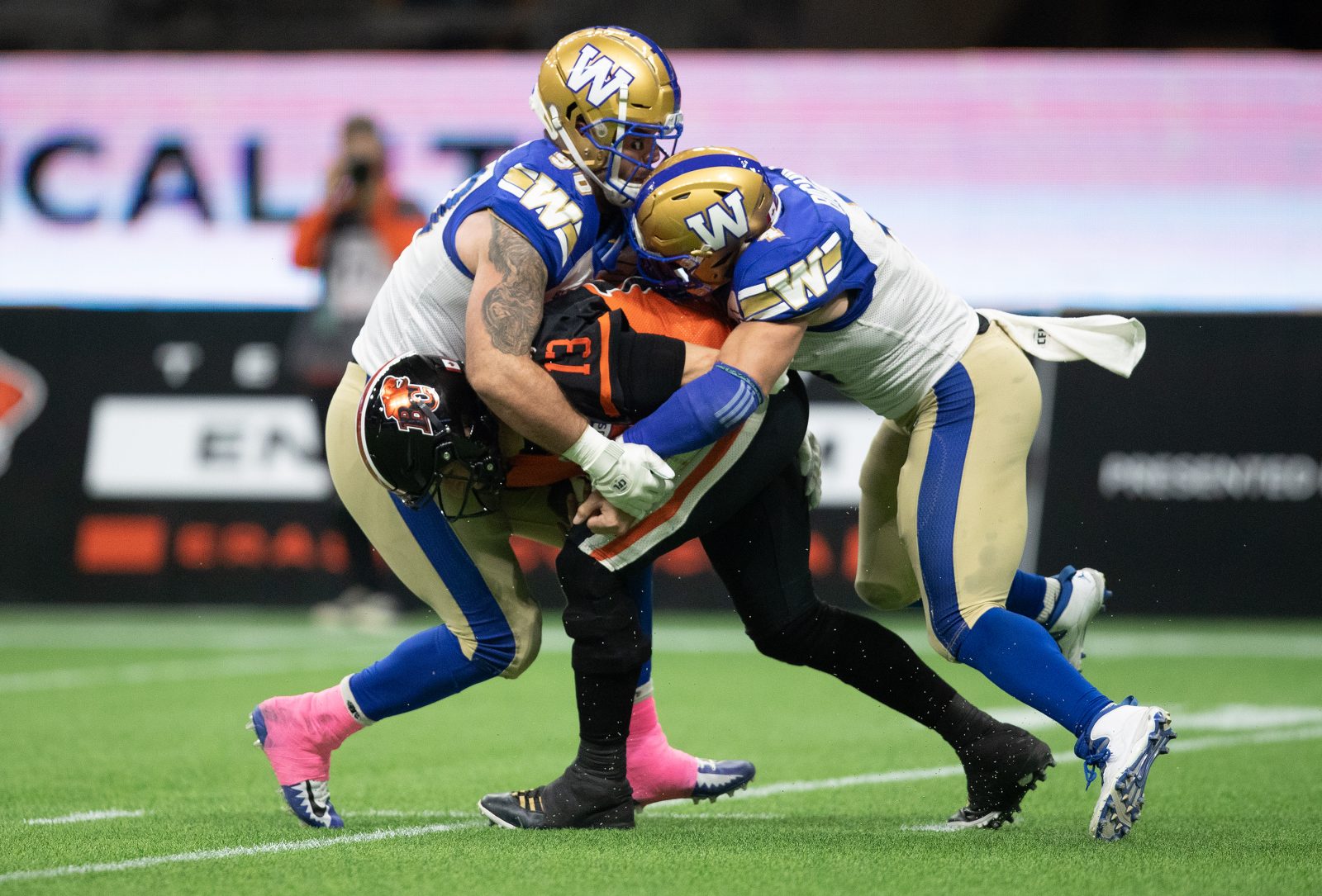 5 Quick Hits from Tuesday: Day 1 of the Blue Bombers practice week — and a closed-to-the-media session — leading up to Friday’s meeting against the Edmonton Elks at IG Field:

1. COLLAROS SALUTED: The CFL announced its Top Performers for Week 9 and, not surprisingly, Bombers QB Zach Collaros was atop the list after completing 28-of-33 passes for a CFL season-high 417 yards and two touchdowns, one to Kenny Lawler and the second to Rasheed Bailey.

Slinging it for a #CFL season-high 417 yards, @ZCollaros7 has top honours alongside a pair of standout @REDBLACKS! 👏

Collaros leads the league with 2,148 passing yards with a completion percentage of 72.4, and is second to Montreal’s Vernon Adams, Jr. in touchdown passes with 12.
As we pointed out in this week’s Upon Further Review it was the third 400-yard passing game in Collaros’ career and second-highest to a 439-yard game he had while with Hamilton in 2016. It was also the first 400-yard passing game by a Bomber QB since Joey Elliott had 406 yards passing in an August game in 2012 and the most by a Winnipeg pivot since Ryan Dinwiddie threw for 450 yards in a game in 2008.
“Any time there’s an individual award or any kind of notoriety it’s just a reflection on the unit and the team,” said Collaros. “It feels good that we performed well last week, for sure. But all that really matters is getting wins and if you asked anybody on this team personal statistics don’t matter. It’s all about at the end of the game being 1-0 that week and that’s what we’re all trying to accomplish.”

2. RECEIVER ROSTER IMPACT: The one-game suspension of Kenny Lawler means the Bombers will be without their leading receiver — and the top receiver in the CFL — for Friday’s game against the Elks.
Asked about the club’s options as a possible replacement, head coach Mike O’Shea said:
“A plethora of players ready and willing and able to jump in and perform and help us win.”
The Bombers do have two players who have already started games at receiver this year in Kelvin McKnight and Charles Nelson, along with returner Janarion Grant, long-time CFL veteran Naaman Roosevelt and Carlton Agodusi, who had a solid training camp and is on the practice roster.
There’s another possible impact on top of the Lawler suspension, as Canadian receiver Drew Wolitarsky did not finish the game after an apparent knee injury. Wolitarsky had four catches for 68 yards in the game — including two second-down conversions — before being hurt. James Tyrell replaced him in the game and if Wolitarsky isn’t able to play the team also has 2020 CFL Draft pick Brendan O’Leary-Orange available.
Said Zach Collaros:
“We’ve got a great receiving room, guys that want to learn and whoever is out there will be ready to go.”

3. HARD CONVERSATIONS: The Lawler incident saw the receiver address the team Tuesday and also speak to several teammates one-on-one, including Collaros.
“It’s unfortunate, the situation that Kenny has ultimately put himself in,” said Collaros. “He’s very remorseful. Having the chance to speak with him (Monday) night he really understands the magnitude of the decision that he made and the position he put himself in and how it could affect him and obviously others whenever you make the decision to get behind the wheel and drive when you’re inebriated like that.
“It’s not easy to talk about. Guys are frustrated, angry… all those things, while remember he is a teammate of ours, he’s a brother of ours and we have to be there for him as well. He was very forthcoming and trying to be as accountable as he possibly can be for the mistake that he did make. He’s shown a lot of remorse.”
Adam Bighill: “Something like this is always disappointing. But at the end of the day we have to accept it, we have to move on, we have to just keep going about our process. Kenny has apologized, he’s owned up to it and so for us we move on and when Kenny comes back he’ll be ready to go. So, we just move on, go play ball and do what we do.”

4. DISTRACTION CONCERNS?: One more on Lawler’s arrest and suspension. Here’s Andrew Harris when asked if this could be a distraction in the team’s 7-1 start:
“I think all of you guys on the (Zoom) call are probably talking about it more than we are. We’re really just ‘next man up.’ Kenny talked to the team, we realize it is what it is and we have to move forward. We have capable receivers that are going to step up and hopefully fill the void. We’ve got a great team that will really around anyone that’s coming in new and might not be as experienced and we’ll rally around Kenny in the locker room until he’s back.”