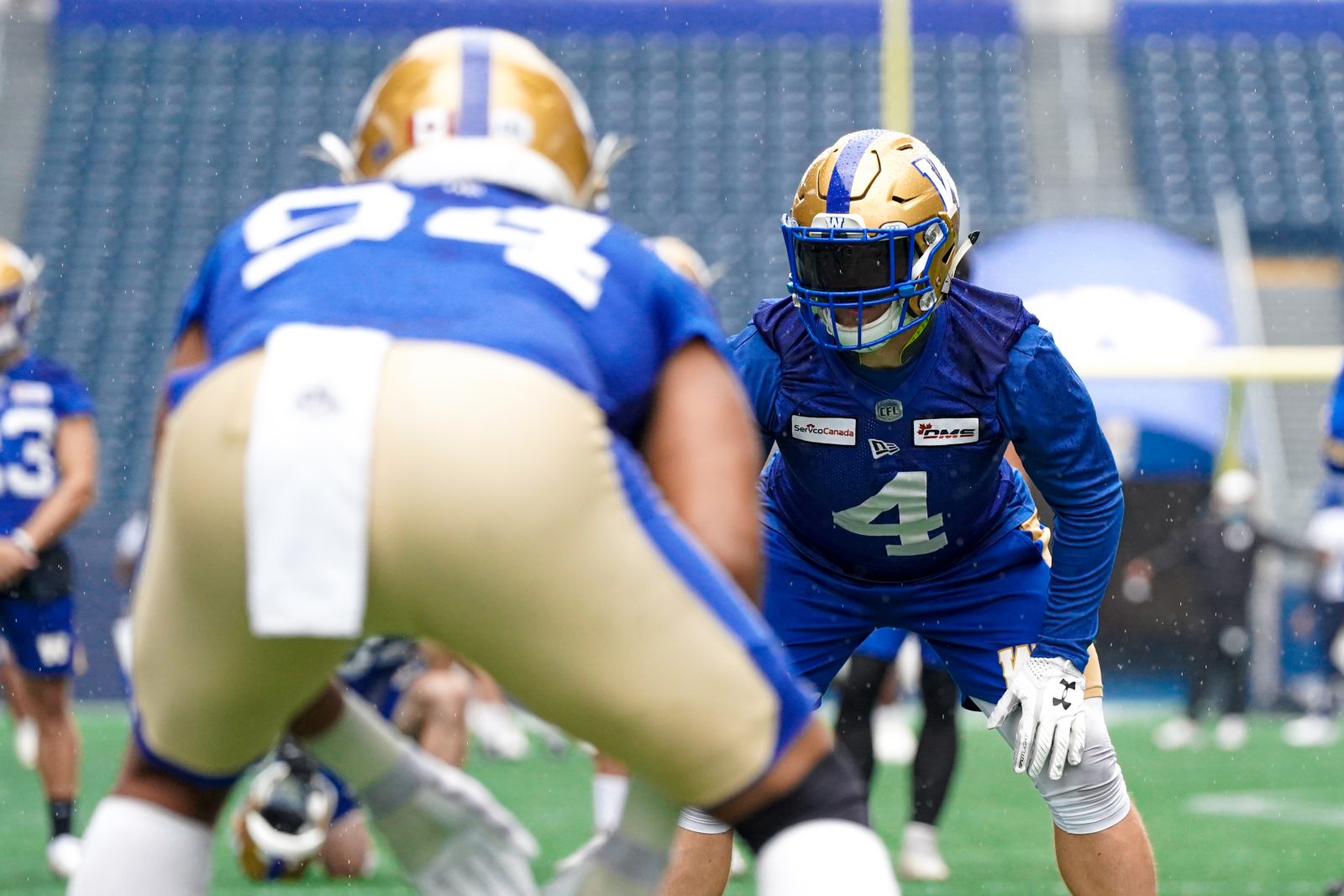 5 Quick Hits from Wednesday — Day 3 of the Blue Bombers practice week leading up to Friday’s meeting with the Toronto Argonauts at IG Field:

1. DOMINANT ‘D’ STARTS UP FRONT: The Bombers are on a superb run of late, having won five games in a row dating back to the end of 2019. And in the last four games the club has surrendered just 45 points. Details on that run can be found here.
Much of that success comes from the push of the men along the D-line, led by ends Willie Jefferson and Jackson Jeffcoat, tackles Steven Richardson and Jake Thomas and rotational regulars like Jonathan Kongbo, Thiadric Hansen and now newcomers like Casey Sayles and CFL vet Tobi Antigha, who was added in free agency.
“I’d say our front is definitely pretty scary,” said middle linebacker Adam Bighill. “Willie’s athletic but he can still play strong. ‘Stove’ (Richardson) is strong, but he can still play athletic and rush the passer. Jackson is a great example of a guy that can literally do anything and plays the run and pass very well — very technical. Jake is a guy that’s always been able to get pressure and do great things on the interior. And we’ve got some great depth behind them. So, for me it’s one of the best groups I’ve ever been around.”
Asked specifically to comment on Jonathan Kongbo, Bighill added:
“Kongbo is a special talent. He’s a very unique player because he’s got the great size, athleticism, speed and a motor and a work ethic that’s second to none. He’s taken huge steps in learning the game and helping him play faster and understand concepts. He’s done a great job of progressing.”

2. BEST OF THE BEST?: There has been a lot of discussion through training camp and into the start of the CFL season as to where the Bombers defensive front ranks across the league. That came up in a media Zoom call with Kongbo on Wednesday.
“We approach it we’re the best in the league and when we say that it’s not in a cocky way,” he said. “But we can back that up with the work that we do at practice. I feel like we are the hardest-working position group and it just shows on the field.
“As far as being best in the league, we’re not too concerned about that. But the tape has its tale.”

3. INJURY REPORT: The Bombers practice was closed to the media on Wednesday. Here is the latest injury report from both Winnipeg and Toronto:

4. JOYFUL TEARS: We told you of the inspirational story of defensive back  Josh Miller when he first signed with the club in February of 2020. ICYMI, check out this link. Miller dressed for the Bombers home opener last week and has been getting more and more work in the secondary.
“I’m having a blast. Everything, all the adversity just made me grateful,” said Miller. “Every day I’m just happy to be there. I’m surrounded by so many talented people I can’t believe I’m here. For me, I feel blessed, I feel grateful and I’m just really happy.
“I went out there for my first game and I had my helmet on and I was just super happy. But, I had tears falling from face… not like sad tears, just happy tears. I was really overjoyed with being here. That’s just an example of how I feel. Tears, man.”
Asked to describe himself as a player, Miller said:
“I’m a completely different person right now than I am on the football field. Completely different. On the field, it’s natural, it’s genuine, it’s authentic, it’s what you’ve been doing since you were a kid being in the back yard. I think about my family, I think about God when I’m out there and so I just try to honour them through the gifts I’ve been given.
“I just try to have fun, man. You see me, I’m going to be smiling on the field. That’s me.”

5. TV RATINGS: The CFL’s first week of action since the 2019 Grey Cup definitely drew some eyeballs across the country. Here’s the latest from TSN’s PR department: