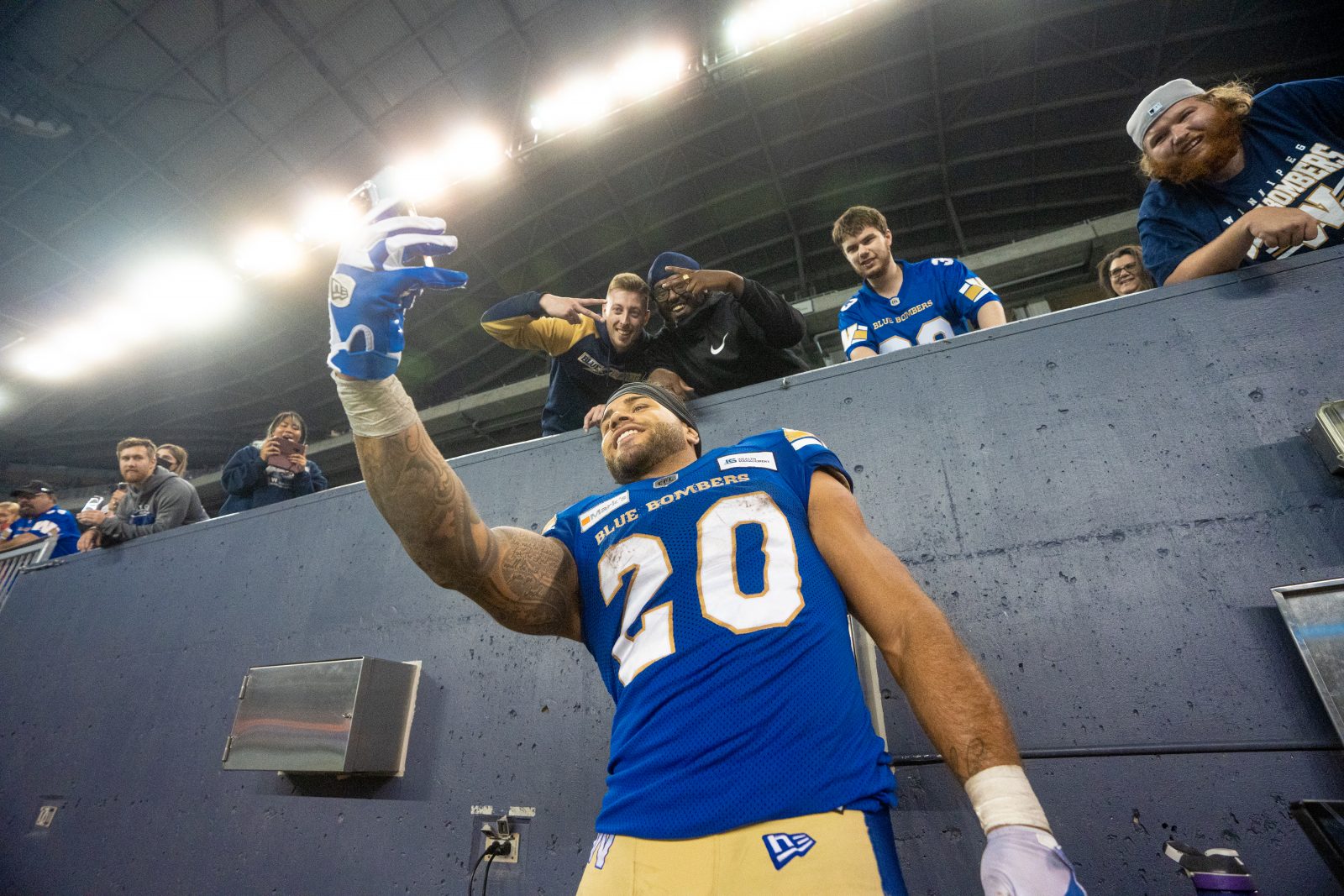 5 Quick Hits from Tuesday — Day 2 of the Blue Bombers practice week leading up to Friday’s meeting with the Toronto Argonauts at IG Field:

1. TAKE A BOW, BRADY O: As debut starts go, Brady Oliveira crushed his first start in last week’s 19-6 win over the Hamilton Tiger-Cats, a game in which the Winnipeg product rushed 22 times for 126 yards and added another 21 yards through the air.
To top it off, he was named one of the CFL’s Top Performers for Week 1:

“It’s great. Still, I don’t want to look too much into it,” said Oliveira after practice on Tuesday. “This is only my first game. I’ve still got lots to prove. I want to go out there each week and do my job, make my teammates proud and go in there knowing they can trust me.
“It’s great and if I keep doing my job hopefully more of those will come. I still want to take things day by day and go out there every week and get the job done and get the win.”

2. INJURY REPORT: A look at the latest report from sick bay both here and in Toronto:

Argos, Bombers Injury Report: Harris, Jefferson among those sitting out

3. FYI: We passed along info yesterday that referenced a Bombers game from 1992 as the lowest passing total by a winning team in the CFL — Winnipeg had just 56 yards that day in a terrible wind storm — prior to Ottawa putting up just 71 yards in their win over the weekend in Edmonton. It turns out there was another contest prior to that and thanks to CFL fan @ticatsroar for pointing out that Edmonton won a game in September of 2015 with Michael Reilly passing for just 49 yards in a win over Hamilton — a day in which Zach Collaros, then the Ticats starter, tore his ACL.

4. SUPPORT GROWING: We told you Monday of the horrible story of Demerio Houston’s daughter getting hit by a bullet during a shooting in North Carolina.

“We’re still in disbelief that our child was shot”

That story included a link to a GoFundMe page the family has set up and already they are seeing a spike from Blue Bombers faithful.
“Me and my wife have definitely noticed,” said Houston on Tuesday. “Matter of fact she texted me this morning and told me. I just wanted to say from me and my family we greatly appreciate the prayers, the GoFundMe and everything.
“We’re just thankful that the Bomber family and everybody is trying to help me and my family.”

5. QUOTABLE: It had been a while — 620 days, to be exact — since the Bombers had last been on the field in game action prior to last Thursday. And the physical toll can be dramatic. Just ask Bombers guard Pat Neufeld, who returned to practice on Tuesday after missing Monday’s session.
“It was sore after the first game, I’m not going to lie,” said Neufeld, when asked how his body felt afterward. “It’s a bit like being in a couple car accidents. It was pretty sore. But we were lucky that we had a couple days off and we have a tremendous treatment staff here that does a great job of taking care of us.
“I just needed an extra day for maintenance and I’m feeling ready to go again.”