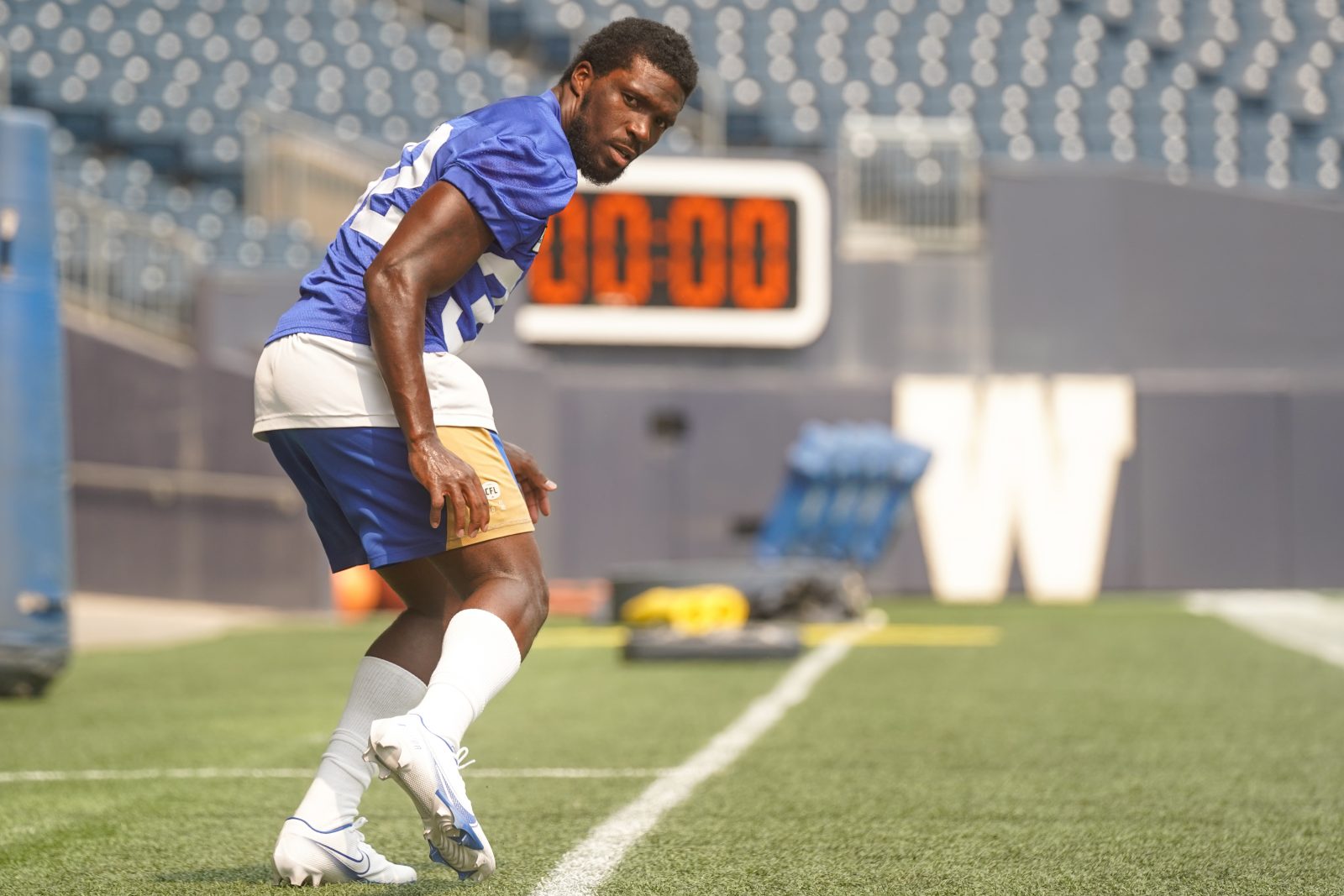 1. DEATRICK, DEAUNDRE… MEET ‘SPEEDY B’: The Bombers depth chart for the season opener won’t be released until sometime on Wednesday. We do know that there will be three changes in the secondary following the departures of Winston Rose and Marcus Sayles and the injury to Mercy Maston.
Veteran Josh Johnson continues to get most of the work at Maston’s old dime spot, while CFL rookies Deatrick Nichols and DeAundre Alford work on one side of the secondary.
Asked Monday if he knew of Hamilton’s Brandon Banks — Speedy B — who is also the reigning CFL Most Outstanding Player, Nichols said:
“That’s the guy. That’s the guy. He’s the offensive outstanding player of the year. I wouldn’t want it any other way than like this. Being in the first game in the CFL, playing one of the top dogs makes you show up. I don’t have a choice but to show up. It’s either I get embarrassed or I show up.
“… You’ve got to be up for the challenge. I know they’re pretty good over there and watching them, they’ve got a high-paced team, a well-coached team. I think we’re pretty good, too, and it’s going to be a fight if I’m out there.”
Nichols spent part of last year with the Miami Dolphins and, prior to that, was leading the XFL in interceptions as a member of the Houston Roughnecks before the pandemic shut that league down.
“It’s a blessing to be here, man,” he said. “Starting off with a 100 guys and finishing off with the top 46 and being on the team… it’s a blessing.”

2. TUNNEL VISION: The Bombers will unveil their 2019 Grey Cup banner prior to kickoff on Thursday night… just don’t expect head coach Mike O’Shea to spend too much time veering away from last minute game preparation to get too wrapped up in the moment.
“I don’t know that we’re going to spend much time admiring that,” said O’Shea. “I think everybody is going to be pretty focussed on what we have to do.. It’s been a while since we’ve been on the field, so I think guys are going to be pretty focussed on making sure they’re going to be ready to play the game.
“I answered this before when we were talking about the banner. It’s a great reminder for the fans. This is a new team and I don’t know in any pro sport if you can ever rest on laurels. You’ve got to keep pressing forward and try to win the game that’s in front of you. So, I don’t know if I’ll ever take the time to sit back and enjoy something like that. That’s a long time ago.”

3. OUCH UPDATE: The new and now-daily injury report from the Bombers:

With Harris on the mend since the opening of training camp, Brady Oliveira has had the bulk of the work. Johnny Augustine’s workload has increased since he returned to practice last week. Charles Nelson is working with the starting offence in place of Adams, while Jontrell Rocquemore is in Wilson’s spot in the linebacking corps.

4. FYI: Deatrick Nichols on the influence of veteran safety Brandon Alexander: “We go as he goes. He’s a great energy guy. He plays his role. He’s a true leader, it’s not like he’s on and off just being a leader around the coaches. He makes sure everybody knows what they’re doing and he always says, ‘if you don’t know just ask me if we’re out there’ because he’s been around the system a long time and he knows the ins and outs. He’s a great guy to go to when you need help or just a little bit of confidence.”… Bombers offensive coordinator Buck Pierce on the growth he’s seen from RB Brady Oliveira from training camp through to Week 1: “I’ve seen quite a bit from Brady. All the coaches have. His work ethic, really how he’s starting to communicate more, he’s starting to find his own a little bit. The more reps you get, the more things he is able to do, you can just see a comfort level with Brady and there’s some growth there as well. We’re excited. We’re excited about where Brady is going and what he can do.”

5. QUOTABLE: O’Shea when asked if the Bombers could have had a tougher season-opening opponent than the Ticats, who were 15-3 in 2019 and are the early-season Grey Cup favourites in 2021:
“I think competitive groups, on both sides, would like it this way. It’s a shortened season. Guys are raring to go. I don’t think there’s any easing into this. You’ve got to go. There’s probably no better situation than going against the team that had the best record in 2019. They were an awesome football team so, let’s go.”