The Winnipeg Blue Bombers open training camp July 10th. This is the fourth in our annual positional-preview series leading up to the first day…

They came flying off the edge, and rammed straight through the middle. They forced fumbles, registered sacks and tackles for losses, knocked down passes, changed throwing lanes, and rushed throws.

Yes, the last time the Winnipeg Blue Bombers defensive line was seen doing their thing – and that would be the 2019 Grey Cup – the unit was an absolute tour de force that not only made Hamilton Tiger-Cat quarterback Dane Evans’ night positively miserable, but was critical in shutting down the Canadian Football League’s most potent offence.

The Bombers dominated the line of scrimmage in winning the franchise’s 11th title, with the offensive line doing their thing to open massive holes for Andrew Harris and keep Zach Collaros and Chris Streveler upright. And the defence, led by the front, were the game changers.

Returning for ’21 are the CFL’s Most Outstanding Defensive Player in Willie Jefferson, whose first year as a Blue Bomber was nothing short of spectacular. In addition to posting a career-best 12 sacks, he set a CFL record for a D-lineman by swatting down 16 passes, and led the lead in forced fumbles.

In short, the three-time CFL All Star was exactly the kind of defensive playmaker the club envisioned when making him their marquee free agent addition in the winter of ’19.

Jefferson will be flanked by Jackson Jeffcoat – whose Grey Cup performance was arguably his best as a Blue Bomber — at the other end. There’s a sense there is more to come from the 30-year-old veteran if he can stay healthy, as injuries have kept him from a dozen games over the last two years. The club has lost tackle Drake Nevis and end Craig Roh to the Toronto Argonauts in free agency, but still has Stephen ‘Stove’ Richardson to potentially move into the tackle spot he shared with Nevis alongside veteran Canadian Jake Thomas.

Add Canadian Johnathan Kongbo and Global player Thiadric Hansen to the mix and the club has arguably the best D-line in the CFL, although you’ll certainly get arguments from two-three other clubs.

Just as a refresher, back in ’19 Winnipeg surrendered the fewest yards rushing per game and finished second in forced turnovers and interceptions, third in opposition passing efficiency against and fourth in sacks. And much of that came as a direct result of their dominant work up front.

So, given the D-line depth and stability, by the time these guys get back at it — some 20 months and 12 days since the ’19 championship – they figure to once again have opposition QBs across the CFL once again waking up in cold sweats and contemplating career changes. 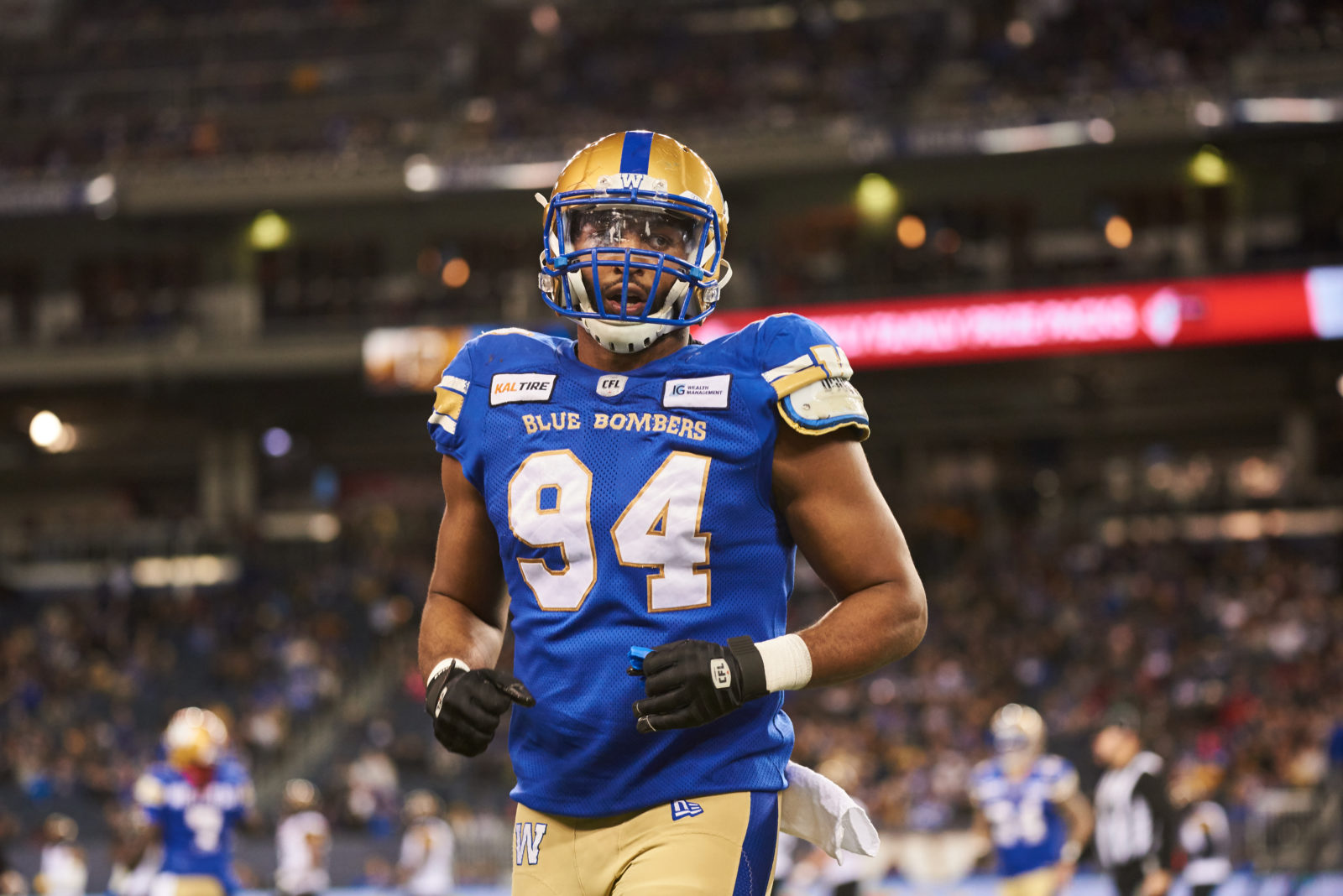 A LOOK AT THE DEFENSIVE LINE

Antigha signed with the Bombers in the 2020 free agency period and brings 46 games of CFL experience with Toronto and Saskatchewan to the club. He’s versatile enough to play both end and linebacker, all of which makes him a good fit in Richie Hall’s defence where players can be moved around like chess pieces.

His return to the club in early June didn’t generate any fanfare, but could potentially be huge for the club. He spent 2020 trying to and a job with the San Francisco 49ers, but an injury late in camp killed that shot. He played one game in The Spring League before returning to Winnipeg.

He has the speed and quickness to play end, but has also taken snaps at defensive tackle. That kind of versatility gives the Bombers so many options, both with the line and with the ratio.

The Bombers defence allowed the fewest rushing yards in the CFL at 64.2. The next lowest was Saskatchewan at 92.6. It marked the first time since 2003 the Bombers D ranked first in this category.

How much pressure did Jackson Jeffcoat and Willie Jefferson bring in the 2019 Grey Cup? Consider this: the two ends combined for six tackles, five quarterback sacks, three forced fumbles and a fumble recovery.