PIT Football had an abbreviated yet exciting summer season of recreational touch football.
The season was a sprint rather than a marathon with just 10 regular-season games being played. Divisions were reseeded at the midway point of the season, which led to greater divisional parity and some great games and races to the finish.
This past summer we crowned 16 champions — nine of which won their first ever outdoor titles!  Highlights of championship weekend can be found here: https://www.instagram.com/p/CUa0oeaAsaS/

The Connor McDavids certainly have Things and Stuff’s number as the McDavids remain undefeated against their long-time friendly rivals. 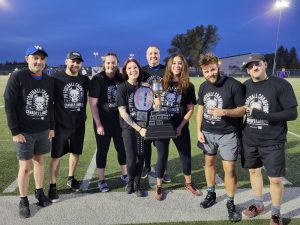 Seven different players scored for the McDavids in the title game, which is what makes them particularly difficult to defend. The McDavids were led all season by Lauren Garbutt, the division’s leading scorer and Most Valuable Player. Lauren continued her MVP play with a touchdown and a sack in the finals.
With the win, the Connor McDavids become the all-time winningest coed team.  Not bad for a team that started out as a group of free agents!

Medical Whiskey and 0-10 pulled some improbable upsets in the semi-finals, which is what makes the coed division so much fun. 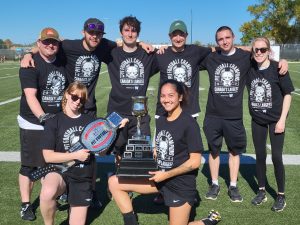 0-10 started the season 0-9 before winning their final regular-season game to avoid matching their namesake. Led by divisional MVP John May, they carried that momentum to a semi-final victory, and a halftime lead in the finals, until Medical Whiskey got their offence on track in the second half.
Two touchdowns a piece by Graham Silver and Amanda Clark prevented the 0-10 Cinderella story from coming to fruition.

Both coed teams were upset in their respective Division 2 semi-finals and were relegated to the coed Division 3 consolation final. 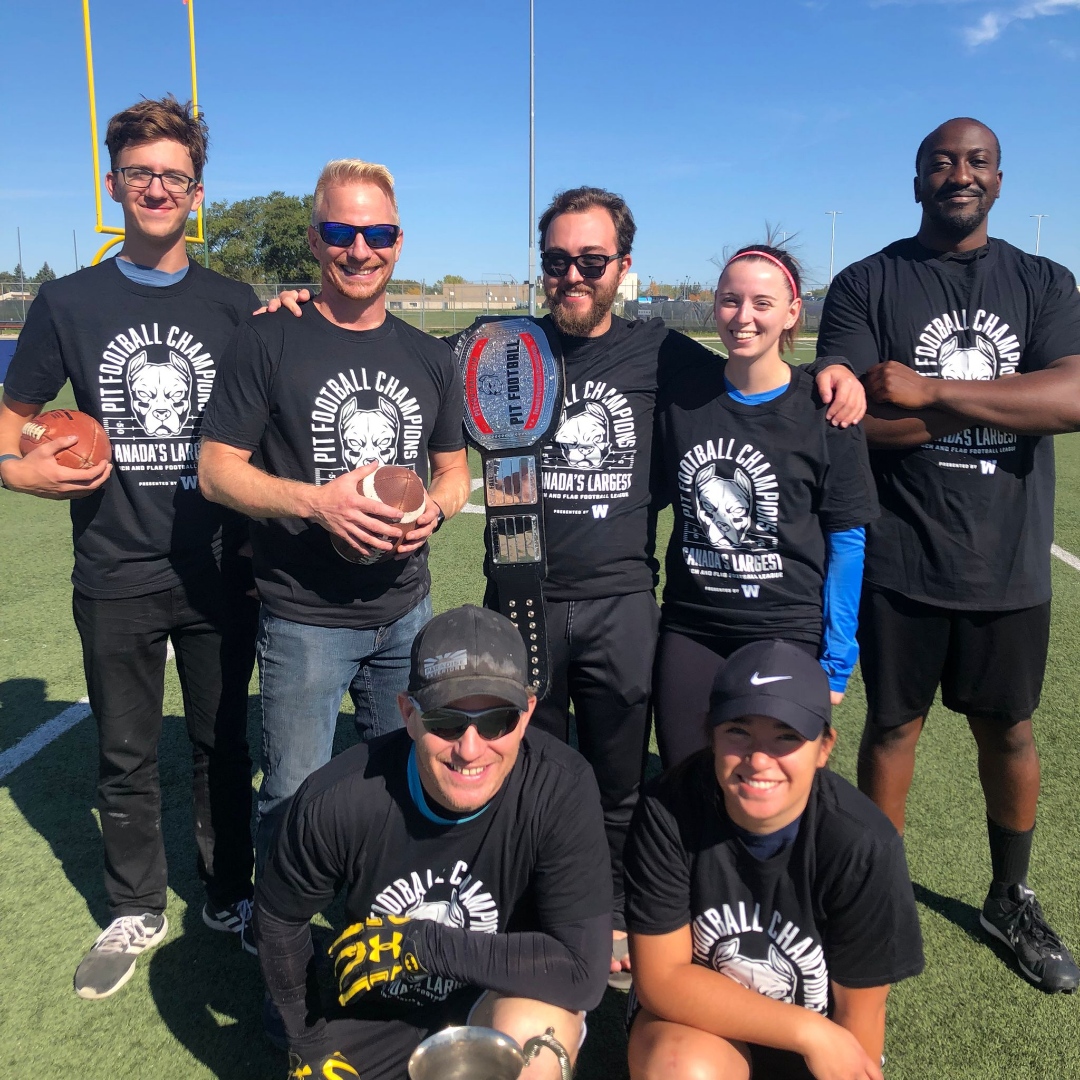 Any given Sunday in the PIT, where top seeds and undefeated teams regularly go down in flames in the playoffs. This Ain’t Soccer had perhaps the hardest strength of schedule in the coed division, which helped this team down the stretch get better and better.
The upsets in the semi-finals notwithstanding, these two teams could be top competitors in the division for years to come.

In the final game of the regular season the United Nations ended Big Baller Brand’s bid for an undefeated season by scoring the winning touchdown on the last play of the game. 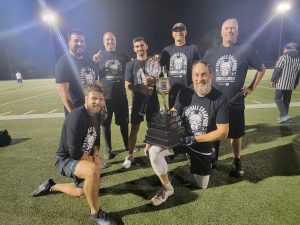 Big Baller Brand returned the favour in the final by scoring the winning touchdown on the last play of the championship game! These two teams were so evenly matched that whoever had the ball last was probably marching towards victory.
The championship game winning touchdown was hauled in by Cliff Kitchen, the division’s leading scorer. At age 60, Cliff became the oldest player to ever score over 100 points in a season (112)!

Fake TDs won their first outdoor championship by avenging their regular season loss to TunAsub in what turned out to be a defensive battle. 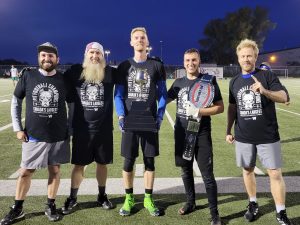 TunAsub has some incredible athletes and played man-to-man defence on most plays, whereas Fake TDs play a very disciplined zone defense. A great contrast in styles.The game came down to holding TunAsub quarterback Liam O’Brien, potentially the most-mobile quarterback in touch football, in check. Game MVP Seth Boulding was able to do just that, registering a remarkable seven sacks on defense, to go along with two receiving touchdowns on offence!

What better matchup than the Buddies vs the Bunnies! 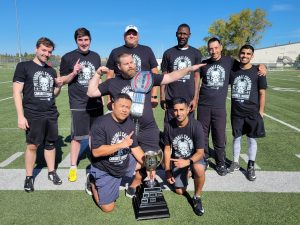 Another back-and-forth game, with both offences firing on all cylinders. The Bunnies scored late to bring the score within a touchdown, however, they couldn’t force a turnover from the Buddies, who were able to take the ensuring drive and march the field, killing the remaining few minutes off the clock.
The Huddle Buddies hit the winners circle for the first time in many a moon. It was great to see some familiar faces reclaim a championship that has eluded them for so long.

Game of Zones (one of the more clever team names!) was the top seed in the division; however, Onslaught just seems to have their number, winning both of their matchups in the season by a wide margin.

Sometimes a team’s game-planning or personnel just seem to match up well!The Onslaught defence was able to hold the division MVP Mason Jesmer off the scoresheet, something that had occurred only one other time this season. On offence, Mike Funk turned back the clock scoring four touchdowns and accounting for 26 total points.
On this day, the veterans were able to school the youngsters, but we have Game of Zones on future watch. With just a little more experience, this team is a definite breakout candidate.

These two teams met four times during the regular season, with both teams winning two games each.
Each game was a low-scoring battle and the championship would decide the season series. 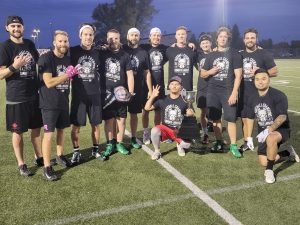 Division 1 has done a complete 180. A division that was always predicated on offence, and lots of it, has now become a defensive chess match. Rebellion won their third straight Division 1 title, remarkably with three different quarterbacks helming the team!
This goes to show how good this defence is as they plug and play different quarterbacks. Not surprisingly, the winning touchdown in this game was a pick six. Good luck to Rebellion who will represent Manitoba at Nationals Thanksgiving weekend!

Guild of Calamitous Intent 47 The Kings 6

The final game of the regular season between the Guild and the Kings resulted in a 20-20 tie.  Unfortunately, the Kings were missing their Divisional MVP Luke Jacobucci who was injured in the season finale. 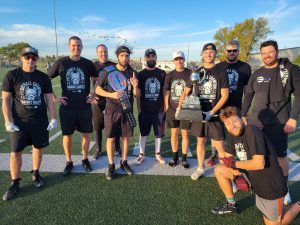 The lopsided score wasn’t indicative of how closely matched these teams were during the regular season. Five different players scored for the Guild, including a pair each from James Teschuk and game MVP Nick Trinder.
The Guild are a tweener team, not the caliber of the Division 1 teams, but perhaps not the caliber for Division 2 either. We will see how the indoor seasons play out to see where this team ends up starting next summer.

The game of the weekend belonged to the Division 3 final, where quarterbacks Matt Nikkel of the MonStars (four touchowns throwing and one running) and Aaron Wold of Blount Force (five touchdown passes) put on a clinic. 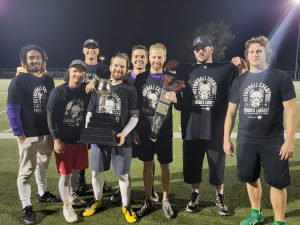 The MonStars held the lead from the first drive all the way to the last two minutes of the game. Blount Force kept pace, and eventually tied the game when Derrick Shore caught his third touchdown pass. Unfortunately, Blount Force was unable to convert the convert.
Matt Nikkel then drove the field to the Blount Force 35 and on the final play rocketed a punt through the back of the endzone for the rouge and the game winner!  Whether you are a fan of the rouge or not, this was a game for the ages!

The Division 4 final pitted the Gamecocks, who were moved up from Division 5 after they went undefeated before the reseeding, against North Bay who moved down from Division 3 after going winless in the first half of the year. 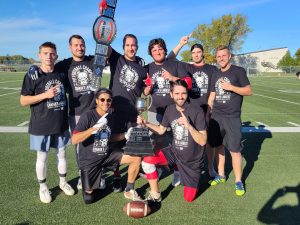 The betting money was on North Bay after their head-to-head regular season victory over the Gamecocks just a couple of weeks earlier. However, the Gamecocks made certain there would be no championship parade in North Bay this summer.
Divisional MVP Isaac Henry had two touchdowns for the Gamecocks, as did mid-season acquisition and coed specialist Derrick Hrabarchuk. Newly promoted quarterback William Reimer was the game MVP after throwing for five touchdown passes. It seems that all the pieces came together for Gamecocks at the right time!

The Rigs are newcomers to PIT Football. The first impression: “If these guys can learn to play some defense, they are going to be scary.” 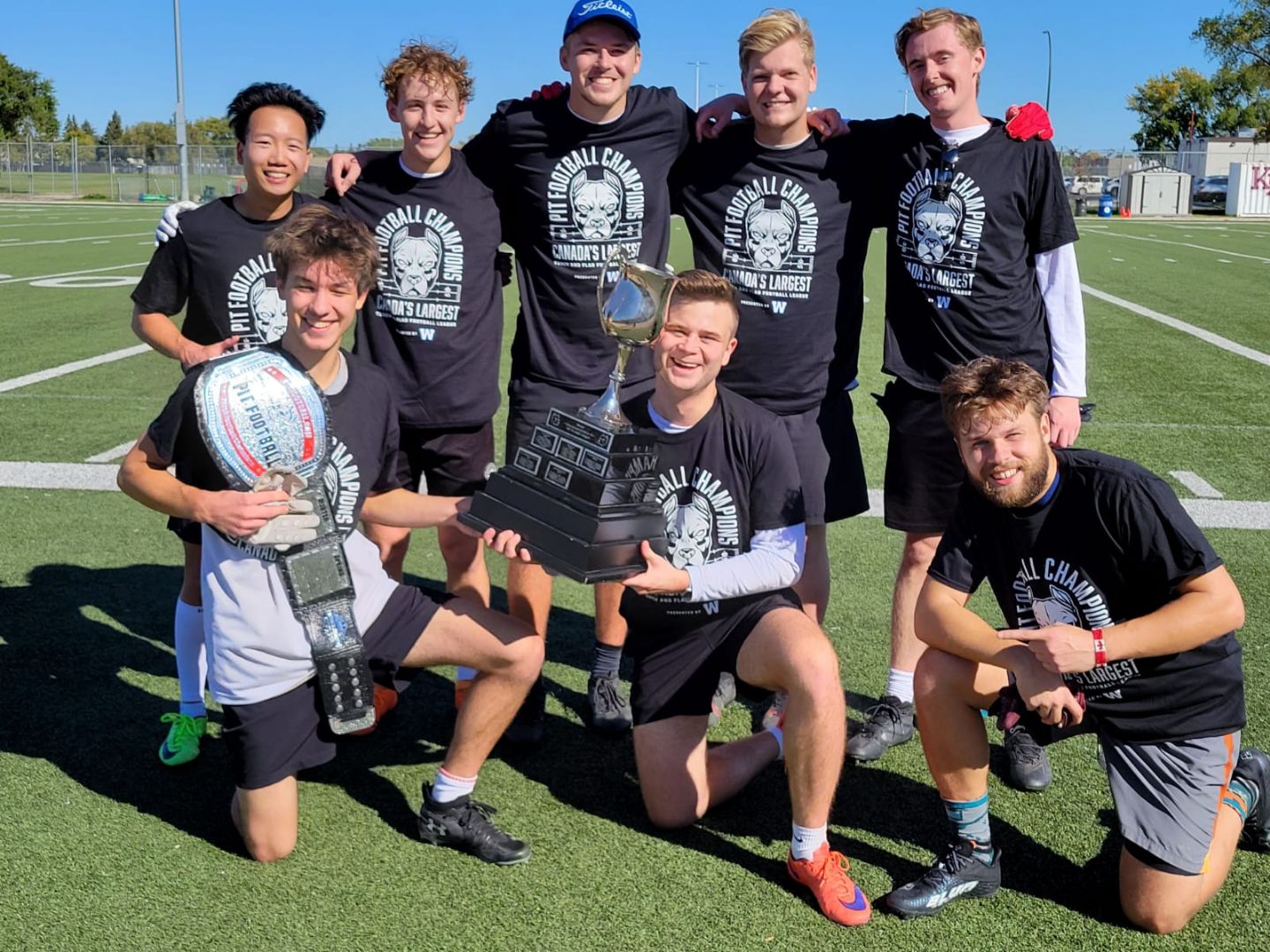 Over the course of the season, they learned some defense!
What the Rigs lacked in experience, they made up with speed and skill, which was on full display in the championship finals. Five different receivers hauled in passes as the veteran Fail Mary defence couldn’t keep up. It didn’t help the Fail Mary cause that former league MVP James Teschuk got to work mid-season on the Rigs defense which held the high-powered Fail Mary offence to just a single touchdown.
It will be interesting to see how these Young Guns fare in a division higher next summer! 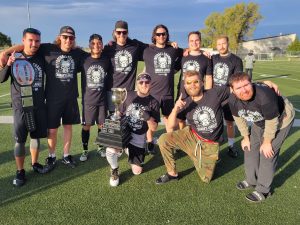 The Cannons were led by division MVP Kyle Smith’s run-and-gun style of offence which helped them jump out to a comfortable early lead. The veteran Necessary Roughness team were not deterred and clawed their way back over the next three quarters, pulling within a touchdown with a few minutes remaining.
The Necessary Roughness defence held the Cannons to what seemed like a three-and-out with enough time left for a potential game winning drive, but an unfortunate roughing the kicker penalty on third-down ended any chance of the comeback as the Cannons added a very late touchdown to seal the game.

The Blouses Football team only surrendered 28 points all-season, holding teams to a remarkable (and PIT Football record) 2.8 points per game during the regular season. 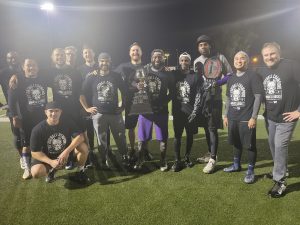 Not surprisingly, the defence once again held up strong shutting out the Clueless ones in the final. The Blouses defence did have its work cut out for them as Bleue’s were strong between the 20s, however they just couldn’t put the ball in the end zone despite multiple red zone opportunities.
If you are a fan of defensive football, this was the game for you.

Another defensive battle as the Glue Factory knocked off perennial Division 8 top-seed choke artists the Kraken in the semi-finals and then the second seeded Cobras in the finals. 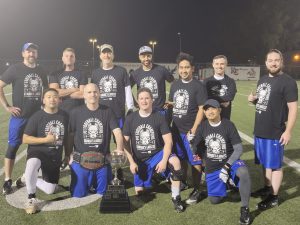 Along the way, the Glue Factory gave up only two touchdowns in the playoffs en route to claiming their second PIT football outdoor championship.
Aaron (Donald) Glawson held the top running quarterback in the division in check, registering four sacks a long the way.
This veteran laden Glue Factory team is not yet ready for the Glue Factory!

Another first-time championship team as the Boltz, led by veteran Carlos Galante, took down Suckskatchewan in the Division 9 final. 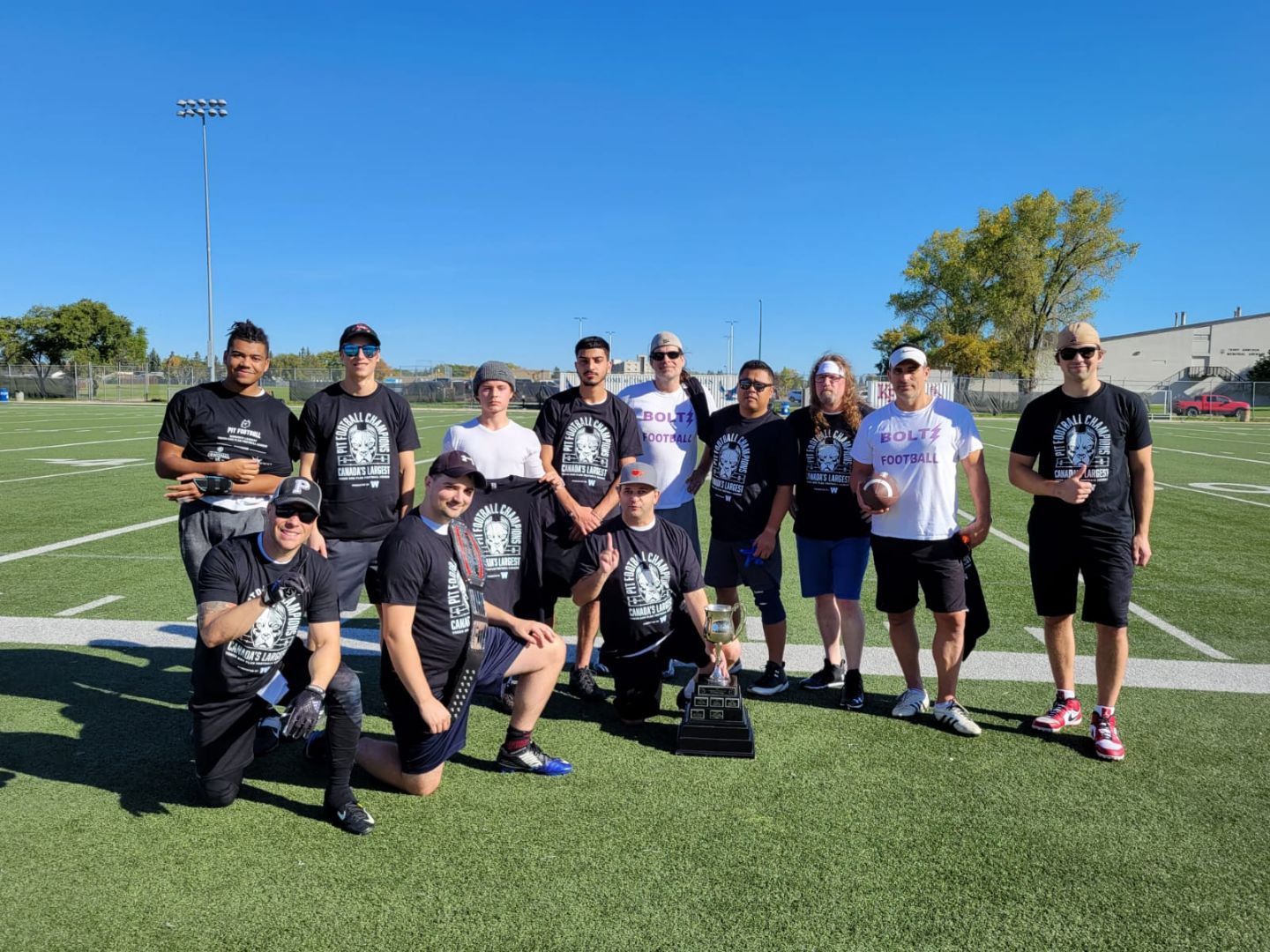 Suckskatchewan had their opportunities, being in the red zone four times in the first half, however they came way with a grand total of zero points. The turning point came on the last play of the half where Suckskatchewan was once again in the red zone looking to put up points. An errant pass was intercepted by Shaun Venn who took it back 108 yards to the house!
Shaun continued his remarkable play, garnering the MVP nod with three touchdowns and two interceptions in the game.

Congratulations to Armi Warha who won the Summer Most Valuable Player award as voted by his peers. After each game, teams pick the MVP from their opponents and the player that accumulates the most votes receives the MVP belt (and an array of prizes from our sponsors) at the end of the season.
Not only is Armi one of the best players in the PIT, but also one of our most sportsmanlike players which made it easy for teams to vote him in as the most valuable player of the summer!

The PIT Football league is the official touch football league of the Winnipeg Blue Bombers.  Registration for the Fall indoor league is now underway. Information can be found at www.pitfootball.com or by following @PITFootball on Instagram and Twitter.