HAMILTON, Ont. – It was October of 2019, and as Zach Collaros looked around the Winnipeg Blue Bombers locker room he could put a name to a face of just a dozen or so of his new teammates. Some he knew from his previous stops in the Canadian Football League in Toronto, in Hamilton and in Saskatchewan, so there was a foundation from which to at least to begin building relationships.

But he also had a playbook to digest and that task seemed to occupy his every waking moment from before sunrise to after sunset as he ventured back and forth between his hotel and IG Field. All of this is to say there was a very temporary feel to his beginnings as a member of the Blue Bombers. Acquired literally seconds before the 2019 trade deadline – the second time he had been dealt that season – there was also a widely held belief Collaros was in Winnipeg simply as insurance and that he would be hitting the free agent market the following February.

“I remember being there for about a week and not really saying it out loud to anybody, but thinking, ‘Man, this is a great place to be,’” said Collaros of his early days as a Blue Bomber. “I was thinking to myself, if I play well, maybe they’ll bring me back. At the time I was also thinking I could go in there and show them what I can do and that I wanted to work hard and if nothing else they can put in a good word for me and I might end up playing somewhere else.”

Fast forward to the present… Zach Collaros was named the CFL’s Most Outstanding Player for 2021 at the Hamilton Convention Centre Friday night, less than 48 hours before he’ll lead the Blue Bombers into a second consecutive Grey Cup game. It marks the ninth time a Blue Bombers player has been named MOP and Collaros becomes the eighth player to win the award after Don Jonas (1971), Dieter Brock (1980 and 1981), Willard Reaves (1984), James Murphy (1986), Tom Clements (1987), Khari Jones (2001) and Milt Stegall (2002).

And how he got here – from a just-in-case acquisition in 2019 to winning the most prestigious individual award in the CFL two years later – makes the Collaros story one of this league’s most unique. 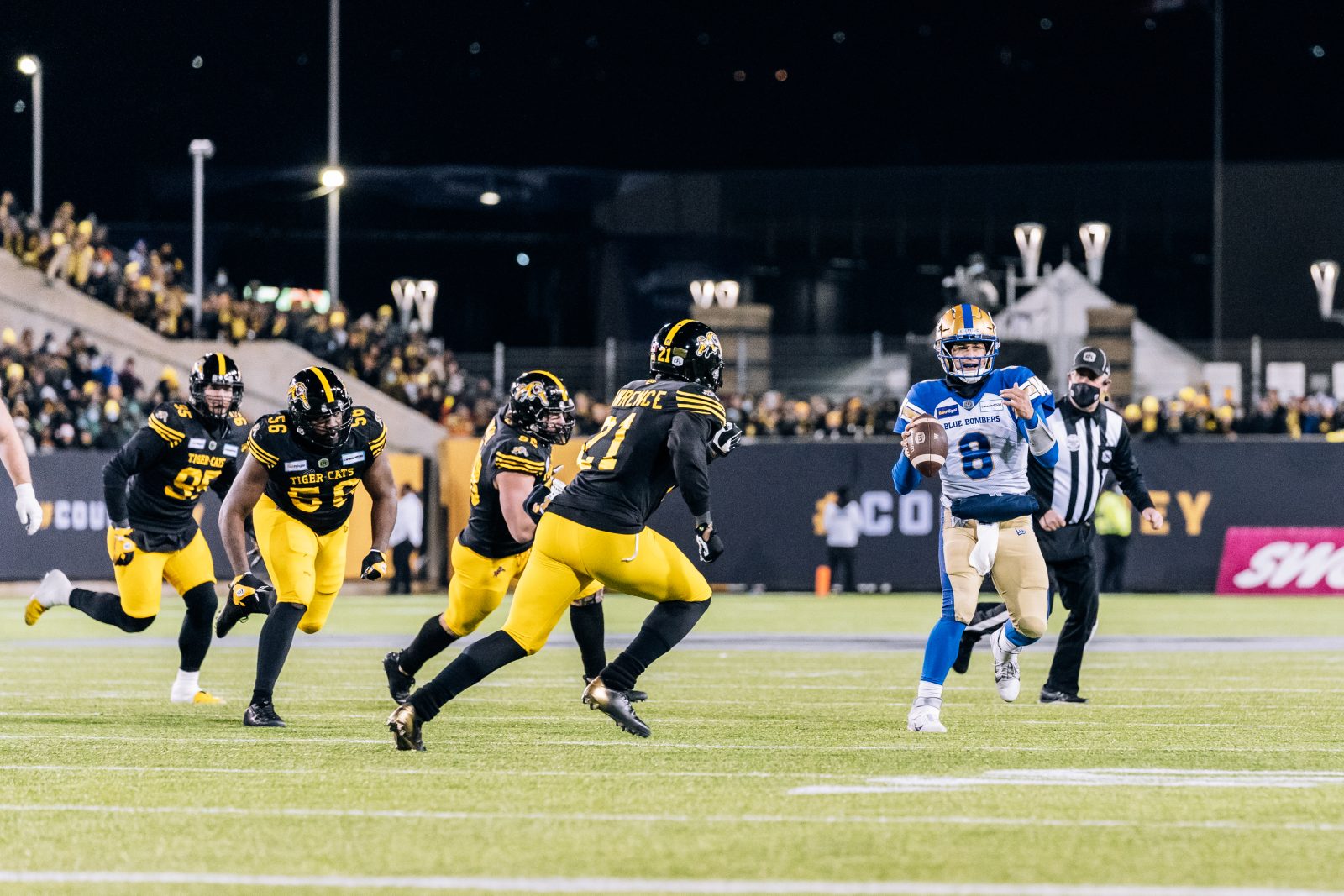 It was a couple of days after Collaros & Co. had helped end the longest Grey Cup drought in Blue Bombers franchise history and the quarterback dropped by head coach Mike O’Shea’s office. The Grey Cup parade was in the rearview mirror and 2020 was on the horizon. But even after going 4-0 in his four starts, Collaros knew the organization had some quarterback decisions to make, what with Chris Streveler already having drawn NFL interest and Matt Nichols, who had been shelved after shoulder surgery, also scheduled to become a free agent.

“I left early (after the parade) because we (his wife Nicole) had an ultra-sound,” said Collaros. “But before I left, I stuck my head into (O’Shea’s) office and – he wouldn’t mind me telling this now – and he said, ‘We need you.’”

“I’m not sure there was another guy who could fit in that seamlessly and get it done,” O’Shea explained earlier this week. “From the second he walked in it was obvious that he could. You wouldn’t have brought another guy in. It just wouldn’t have worked like that.”

Collaros hadn’t heard those words – ‘we need you’ – often enough over the previous few seasons after being traded from Hamilton to Saskatchewan in 2018, then from the Roughriders to the Argonauts and the Bombers in 2019. He also realized that what had happened during his 50 days in Winnipeg in 2019 wasn’t just about the winning. He felt comfortable in the Blue Bombers dressing room instantly and knew the organization was committed to taking a shot at repeating. 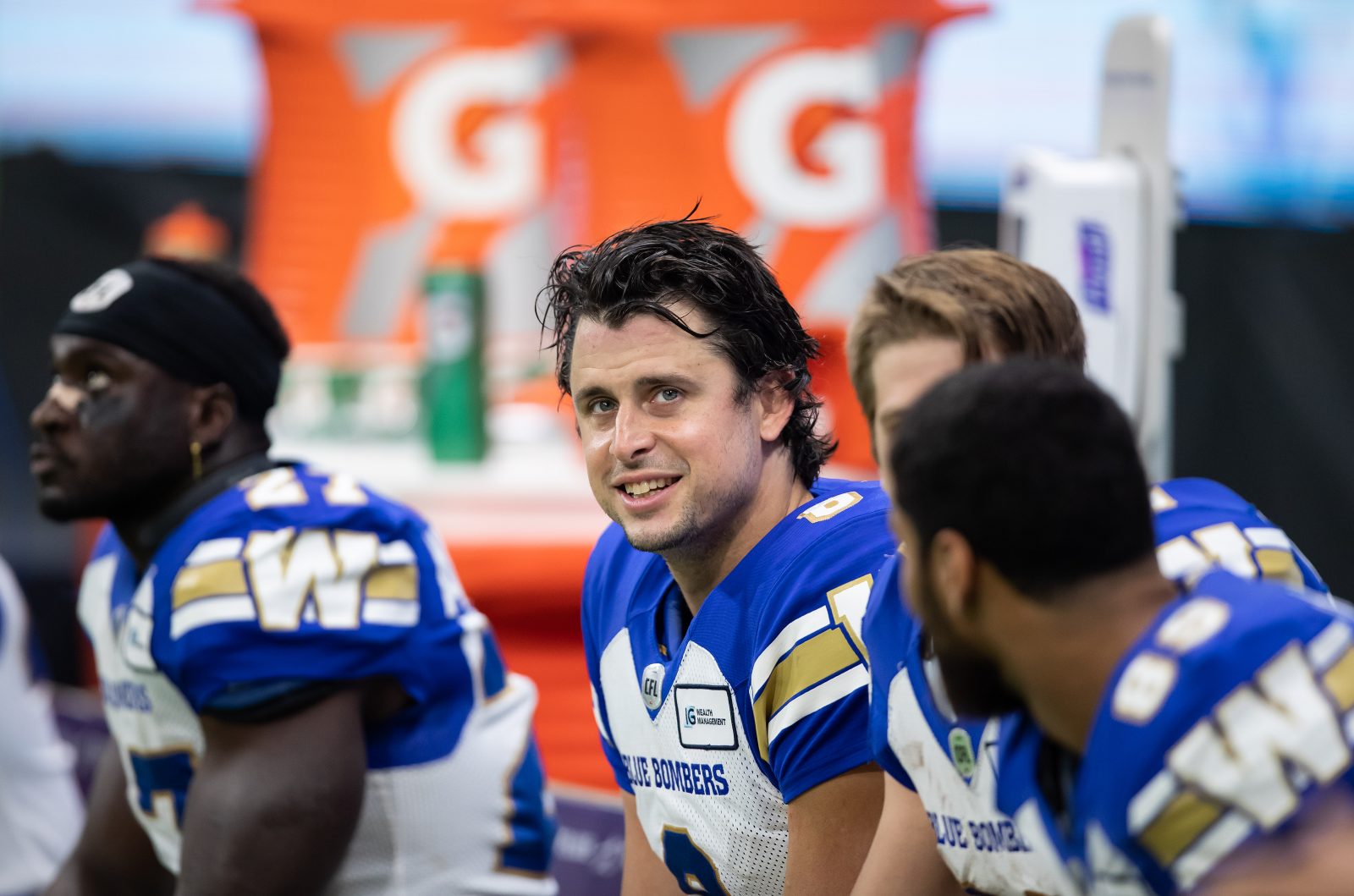 And so it was also about fit and Collaros could feel that there was something growing there even with just four starts in Winnipeg to his name. The Bombers had months to prepare for the ’21 season and Collaros, an admitted football film junkie, spent hours chatting with Buck Pierce, who became the club’s offensive coordinator after the departure of Paul LaPolice to Ottawa.

Pierce liked what he saw instantly in Collaros upon his arrival in late ’19 and what he’s seen this past season – when Collaros led the league in passing TDs and QB efficiency – is a quarterback really taking ownership of the offence.

“That might be a pretty broad statement, I know,” said Pierce. “But he really understands all the intricacies of the offence and what we’re trying to do. We had a lot of time to talk about our ideas in 2020. We were just watching our first game of this year the other day and you can see growth and ownership even from then in everything we’re trying to do. It starts with him wanting to win and compete, but it’s also about he demands accountability from everyone, including himself.”

A couple of numbers, just to hammer home how impactful Collaros has been with the Bombers: First, Sunday’s Grey Cup will be his 19th – including playoffs – as the club’s QB 1. The Bombers are 16-2 in those games. And there’s this: even in this condensed campaign that featured just 14 regular season games, three Bombers receivers posted career numbers in Kenny Lawler, Nic Demski and Rasheed Bailey.

Ask anyone Collaros shares a huddle with and they speak of his competitiveness, his drive and his fire – aspects of his personality that are absent when he steps in front of a microphone to do interviews or in his public interaction with anyone. But in the huddle… 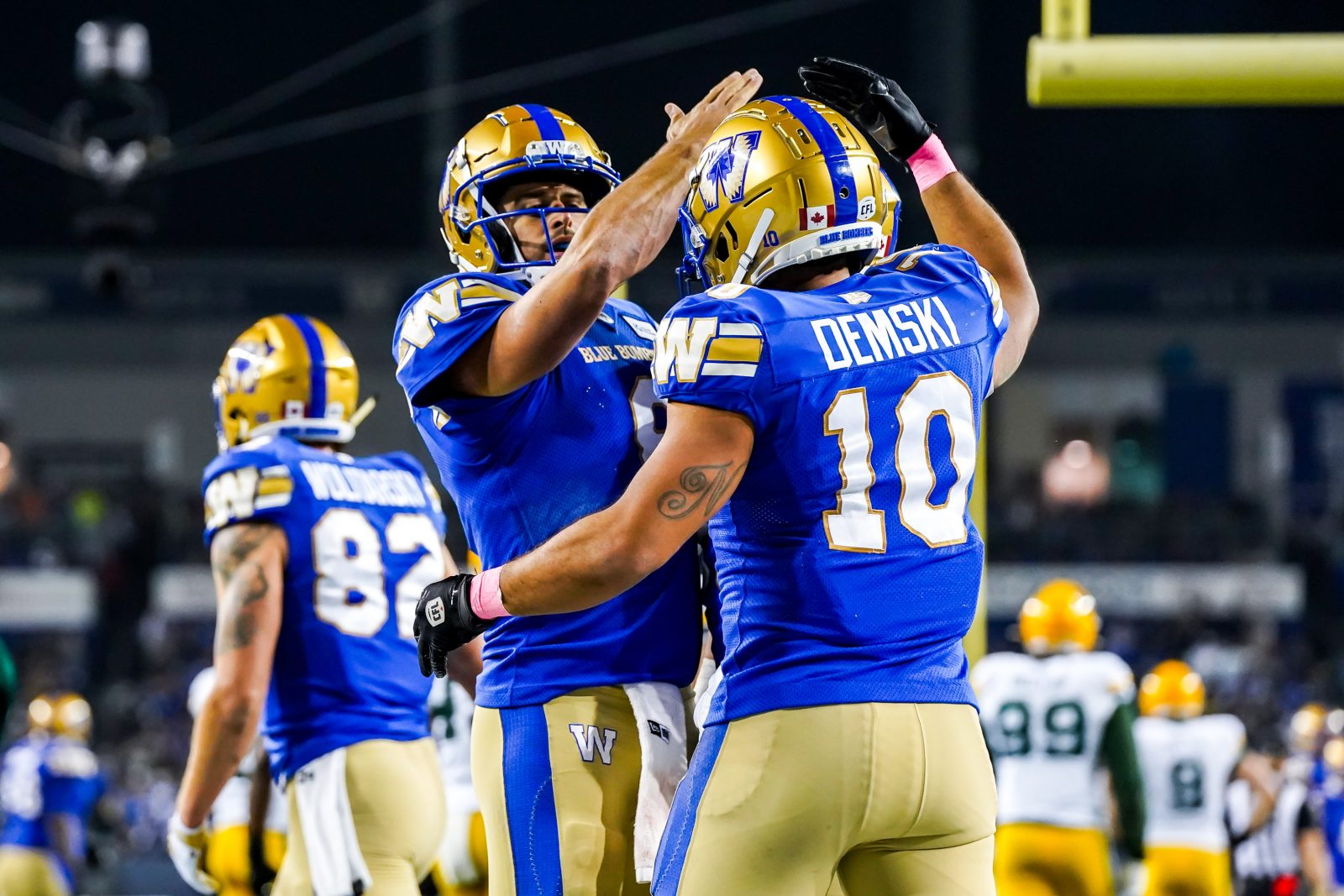 “He can come into a huddle and sometimes he’ll be joking around,” said Lawler. “And other times he’ll be gritting his teeth and say, ‘OK, we’re going to stick it to them right now. So, get ready.’

“That fires me up, man. That fires everybody up. I love his fire. I love his passion. Everything you want in a great quarterback, he has.”

The Most Outstanding Player Award will undoubtedly find a place somewhere in the Collaros household, not too far from Tim Hortons Field where he’ll attempt to further enhance his football resumé Sunday afternoon. This is a story that goes beyond that, of course. This is a comeback story, too. It’s a story about a quarterback who just needed to hear those words again: ‘We need you.’

“Zach… he’s special, man,” said Bailey. “I’m not afraid to tell that dude I love him. He’s been in my corner. He trusted me, he believed in me and I believe in him. I’d do anything for my teammates, but I’d run through walls for that man. He’s probably one of the smartest players I’ve ever been around. Just think about all the guys in our receiving corps who had their best years this year. It’s like having another coach out on the field.

“There’s an energy about him in the huddle. Even though there were times he was shivering in the West Final, he demanded all of our attention and that’s why we’ll do everything to fall behind him. He always makes you right. Zach… he is that guy. He is that dude.”