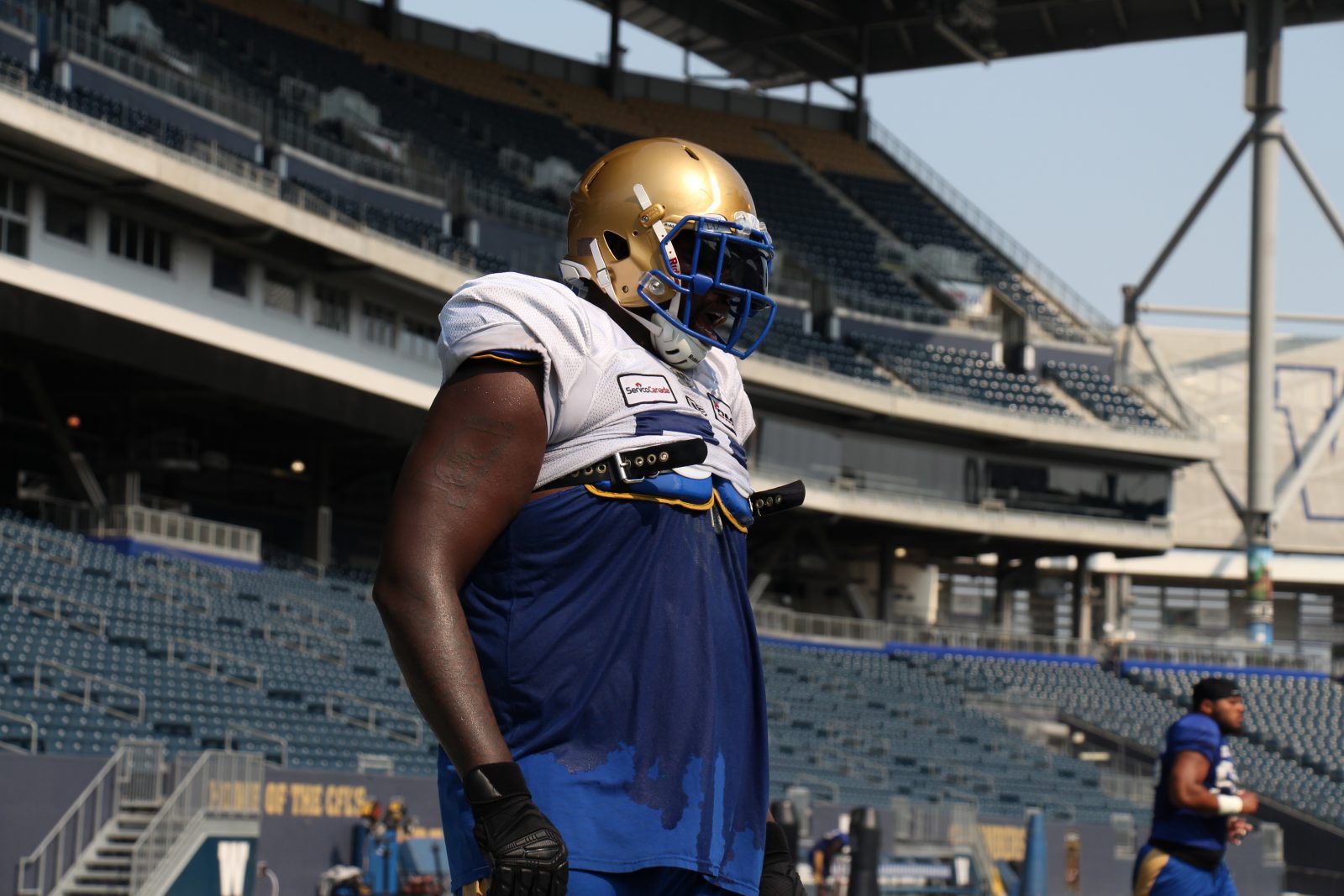 It will undoubtedly be an emotional and electric moment. After all, Winnipeg Blue Bombers fans haven’t just been waiting more than a year to celebrate, they’ve been pining for this occasion for the better part of three decades. And now it’s officially official: the Blue Bombers will unveil their 2019 Grey Cup championship banner at IG Field at the Canadian Football League 2021 season opener on August 5th against the Hamilton Tiger-Cats.

“It’s going to mean a lot to finally get a chance to see the banner,” said Bombers right tackle Jermarcus Hardrick after practice on Tuesday. “The entire season means a lot to me. It’s time to move on to 2021, but it’s the fact that we are the 2019 Grey Cup champs so it will be great to see that banner.

“Anytime we can see fans, anytime we can get anybody inside the building it’s going to be great. The fans have been so great since I’ve been here. During the year off, the year-and-a-half off, fans kept in touch with me on social media and it just feels like family, man. I know a couple fans by name and I just love being a Bomber.”

The game will be the first CFL action of any kind since the Bombers knocked off the Ticats in the 2019 Grey Cup. It will also be the first home game at IG Field since a 29-28 victory over the Calgary Stampeders on Oct. 25th, 2019. Last week, Ticats receiver Bralon Addison said it would be ‘sweet to spoil them dropping the banner.’ Asked about that on Tuesday, Bombers head coach Mike O’Shea quipped:

“The fact of the matter is, I don’t know how you can spoil it. The banner is going to be dropped regardless. So, the fans are going to have their celebration and see the banner revealed and they’re going to be enjoying it from the get-go. So, unless they’re planning on climbing to the roof and somehow sabotaging the rope system I don’t know how that happens.”

Once again, fans are encouraged to arrive early to help with the new protocols in place. Gates will now open 90 minutes before kickoff, with the banner raising scheduled for 7:30 p.m.

“It will create a lot of excitement for the fans and it’s a great way to honour them,” said O’Shea. “They’ve stood by us for that 2019 season really well and supported us really well. And then you also hear stories about people who have been fans their entire lives. It’s nice there will be hopefully a large group of them that will witness that. It really is for them, too, to be recognized.

“I think everybody’s missed the game terribly,” O’Shea added. “I’m excited for that first opportunity and to be the first game of the year and I’m excited that we get to play Hamilton and see our guys get out there and work.”

Hardrick, as many know, is as emotional a player as there is in the CFL and suggested if protocols prevent him from doing his trademark ‘Hardrick Hop’ into the stands after the Bombers score a touchdown he would still be jumping on the sidelines.

“I’m just blessed to be able to play football again,” he said. “If there were no fans there or one fan there or all the fans there I’m here to win games, be the best teammate. Ay time we can get fans in there I’m absolutely going to jump in there, I’m absolutely going to give them some love. But just the fact there are going to be fans there almost gives me chills right now. I’m just ready to pay them back for everything they’ve done for us over the years.

“Most of the times when I interact with the fans or do anything with the fans it just comes natural. There’s just so much going on I’ve gotten lost in the game… we were scoring touchdowns, I heard a couple cannons going off, I see everybody cheering I’m going to get as close as I can to the cheers. It gets me excited thinking about it now. Sometimes I see myself on film and I can’t believe I did that. I get lost in the moment. I have so much fun like a big kid out there. Anytime I can run in the stands, any time I can see a fan, any time I can tell them thank you I’m going to do it.”