Zach Collaros referred to it as an ‘energy’ – although it wasn’t easy for him to explain or quantify it. And Brandon Alexander used the same description, too. The Winnipeg Blue Bombers were finally back on the field on Saturday for the first day of 2021 training camp. And, for many, it marked the first time they’ve been in pads since that fateful day in late November of 2019 when this franchise captured its 11th Grey Cup title.

So, hell yeah, it’s hard to put all that pent-up excitement, all that giddiness, that emotion and longing into words.

“That’s a good question. That’s kind of a deeper question… I think I need Woli (Drew Wolitarsky) sitting next to me to really go into depth about that,” began Collaros with a grin after Day 1 of Blue Bombers camp on Saturday.

“It’s just kind of a feeling you get when you see Stan and Paddy and Mike walking toward you (Bryant, Neufeld and Couture) and they’ve kind of got that grin on their faces. Willie (Jefferson) and Biggie (Adam Bighill) are coming out and they’re yelling, hollering and bringing that energy. Andrew (Harris) has got that cool, calm and collected look and you look over at him and he’s laughing about something.

“It’s just a calm energy, but when things get going there are certain guys that are louder,” he added. “I don’t know, it’s hard to put into words. But it’s kinda like, ‘Finally, we’re here.’ We’ve been waiting a long time for this. Some of us have been in places where you haven’t even really been allowed to be around other human beings. So, it’s nice to just be around other people besides my family.” 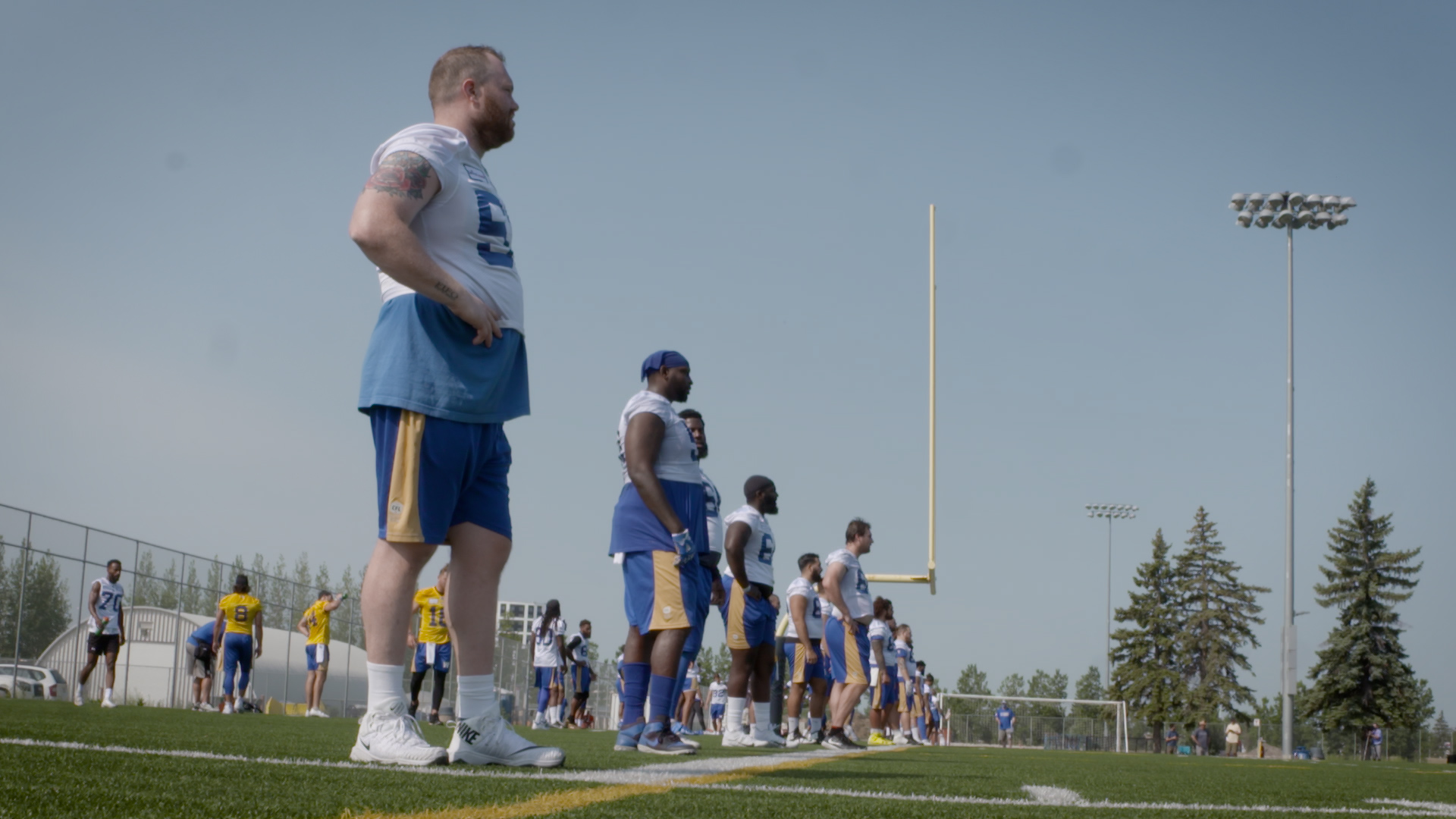 As camp progresses over the next few days/weeks the Bombers will get more into the grind of training camp. There’s plenty of continuity to the 2019 Grey Cup champs, sure, but there are jobs to be won both as starters and for roster spots. Day 1, however, was mostly about conditioning and fitness testing. And the whole morning session certainly had a first-day-of-school-feel to it.

At least, that’s the analogy Alexander, the Blue Bombers safety, used to describe the vibe.

“It could equivalent to being excited to going to your first year of college,” he said. “You haven’t seen a friend or maybe a girlfriend or whoever in years… this is a family. You could feel it from the first day.

“We didn’t even get on the field and we were looking at each other’s eyes and it was like, ‘Wow, we’re really back here looking at each other.’ That’s all that mattered. We didn’t even care about the field at that time; the fact that I could see my brother right next to me and be like, ‘Wow, we’re here. We’re here now!’ That was most important. That’s how exciting it is. We’ve got big smiles on our faces. I’m ready to go. I’m just happy to be around the guys again. This is like real family to me. I missed these guys.”

Even before the pandemic, long gone were the days of full-padded two-a-day practices where players knocked the snot out of each other. And now with no preseason games, with the health and safety protocols in place and players being away from the game for so long – plus with what happened in Saskatchewan earlier this week when four Roughriders were lost with Achilles injuries – the Bombers will slowly ease into training camp.

“It was different, definitely different,” said Collaros. “I can’t tell you how many conversations I’ve had this week, whether it was our first in-person meeting or the first meeting on the field today and we’re just doing the conditioning stuff where you kind of look around and it’s like ‘This is a little different. This feels weird.’ But once we started warming up it’s kind of like a game – once that first snap hits and you’re calling the play, the formation, the snap count, the tempo it is and all that you just get back into that mode with the things you’ve been doing your entire life and it’s like you’re picking up where you left off.

“It was really exciting today. I know we’re excited to get out there and do a full-speed practice.”

All of this doesn’t mean players aren’t being evaluated at all times, of course, but the whole process will have some defined differences. Bombers head coach Mike O’Shea said the change will allow players to learn their assignments before the pace cranks up into next week and then again as the August 5th opener against the Hamilton Tiger-Cats approaches.

Again, though, Day 1 wasn’t solely about evaluation. It was a reunion and a rekindling of a love affair this bunch has with the game and their teammates all wrapped up into one big welcome-back moment. And if that sounds hokey, well, so be it.