Deep down, Stanley Bryant didn’t want to be anywhere else and couldn’t picture himself anywhere else other than in Winnipeg and with the Blue Bombers.

Still, as automatic as his return to the club seemed – he officially signed a one-year extension on Friday – when a guy is just weeks from Canadian Football League free agency the temptation is always there to sniff around and see what the market might offer.

Yet after seeing so many of his teammates already agree to be back on board – including Zach Collaros, Pat Neufeld, Jermarcus Hardrick, Willie Jefferson, Jackson Jeffcoat, Adam Bighill, Jake Thomas, Mike Miller and others — there’s also this…

“At some point in your career you have to be comfortable with your decisions and comfortable with your environment,” said Bryant in a media conference call on Saturday. “I’m pretty sure all of the names you mentioned could have gone elsewhere and got more money and things like that. But, I mean, why would you do that?

“We’ve been winning a couple of Grey Cups the last couple of years. You want the confetti to hit you, you don’t want to be watching confetti and if we keep bringing these guys back, we’ll do that again.” 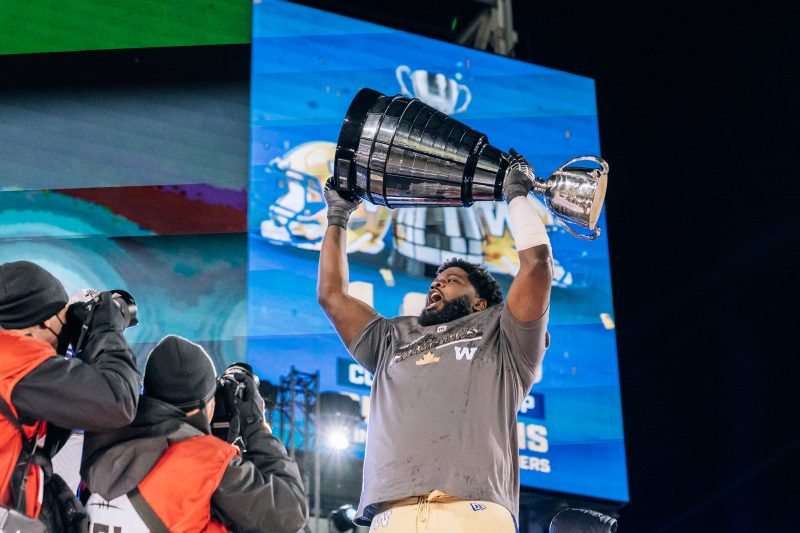 Bryant, now 35, was already an established CFL star when he first signed with the Blue Bombers as a free agent in 2015. He had won a Grey Cup with the Calgary Stampeders in 2014, had already been named a CFL All-Star twice and the Horsemen’s top lineman twice.

But it’s here in Winnipeg where his legacy really grew, and he became one of the most-decorated linemen in league history. He has been named the CFL’s Most Outstanding Offensive Lineman three times in Winnipeg – a first in the award’s history – along with being selected the Blue Bombers top lineman five times, while earning four more berths on the CFL All-Star Team and being part of two more Grey Cup championship teams.

He’ll be well compensated in his new deal with the Blue Bombers, as expected. But he also understands the value in the things that go beyond the numbers on his paycheque.

“It’s deeper than football,” Bryant said, when bluebombers.com touched base with him after the conference call for a further conversation. “There are guys on the team that you’re cool with, guys that you’d still be cool with even if they go to another team or when you retire. For me it’s Paddy (Neufeld), Yosh (Hardrick), Darvin (Adams), Jake (Thomas), Mike (Couture) – look, I hate trying to say all the names because then I’ll get somebody who sees this say, ‘So, you didn’t mention me, huh?’ – there’s so many guys on this team like that.

“Those are guys I have a forever bond with. It’s bigger than football. Those aren’t just my friends on the football team, those are my friends outside of football. We’ve built a relationship over the years where we can for sure call each other brothers. I love those guys to death.

“I just don’t think it would have been smart for me to leave that situation and what I helped build here in Winnipeg,” he added. “I was part of the building process when I first got there and look at where things are now. There would have been no point in leaving the legacy I’ve helped build in Winnipeg and then try and do that somewhere else.”

There’s a quirky-funny story as to how this latest round of contract negotiations with the Blue Bombers was completed. People may have an image of contract talks featuring GMs and agents going back and forth trading offers while arguing over the fine print of a possible deal.

Bryant did his homework on that, of course, but it was during a FaceTime call with Blue Bombers Senior Director of Public and Player Relations Darren Cameron that he officially agreed to terms.

During that call he then looped in Neufeld and Collaros to break the news to his teammates.

And it was Collaros who then officially made the news public, first hinting at it in his own media conference on Friday and then confirming it on his Twitter account later in the day.

“Zach’s a funny guy, he makes me laugh,” said Bryant with a chuckle. I didn’t know he had said that when he talked to you guys, that he was going to be the first to report I was coming back. That’s funny.

“He’s cool. He loves the game and when he gets out there, he’s a warrior. He’s one of the better quarterbacks I’ve played with in my career and I’m so glad he’s back and we have a lot of the group back.

“But when I was talking to Darren the other night, going back and forth (on the contract) and talking about everything and then it just seemed like it was time for me to go ahead and sign.

“I had talked to my family, and I know how much they love Winnipeg and the organization. It was a no-brainer. People always say the grass is not always greener on the other side. Winnipeg will be my home forever.”