Don’t call it an ‘exit strategy.’ That just sounds too formal or corporate. Besides, Jake Thomas is simply having too much fun right now with the Winnipeg Blue Bombers to focus on when or how he might walk away from the game.

All of this isn’t to say that after nine Canadian Football League seasons, 151 regular season games and now two Grey Cup championships to his name, the 31-year-old defensive tackle doesn’t understand that playing pro football does come with an expiration date. It’s just not on the horizon yet for the Blue Bombers longest-serving player after he signed a one-year contract extension this week.

“I’ve been on the year-to-year train of having to make this decision probably in the last two to three offseasons,” said Thomas in a conversation with bluebombers.com from his offseason home in Frederiction, NB. “I’ve been on one-year deals for four to five years and It’s how I like to do them now. It makes you have to play well the next year to keep playing. That’s just how I like to operate. Looking back, 2021 was basically a coin flip until just a few weeks before training camp.”

The 2019 CFL season culminated in glory for Thomas as the Bombers ended a 28-year Grey Cup drought and with the veteran tackle being honoured as the first player to receive the trophy from commissioner Randy Ambrosie. The loss of the 2020 season due to the pandemic saw Thomas pivot to a career in real estate – he showed a house to former Hamilton Tiger-Cats centre Mike Filer earlier this week – but he still has the desire to slug it out in the trenches for at least one more season. 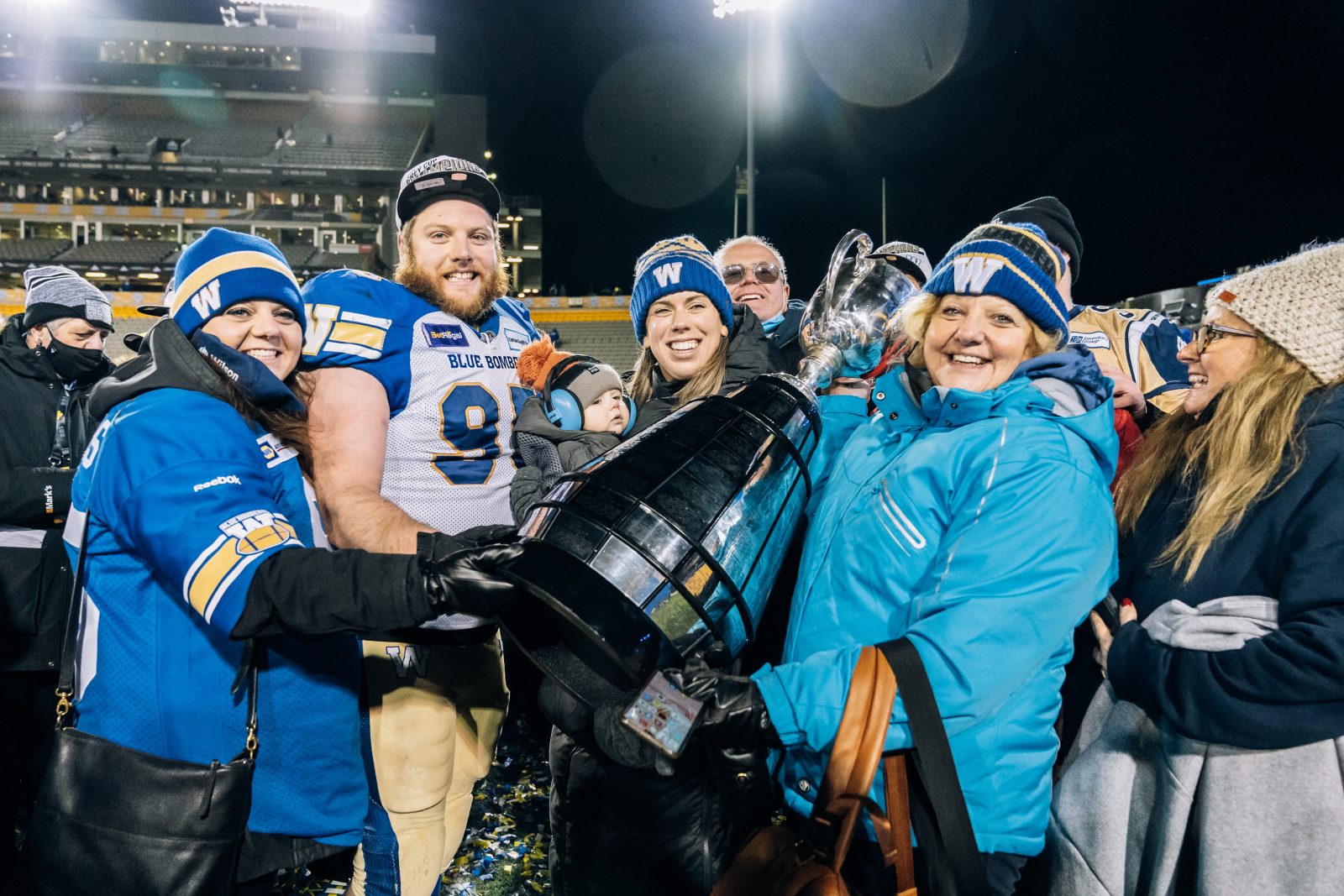 “There’s always been three things that will have me walk away,” said Thomas. “One, and the easiest way, is when they just tell you to walk away. Two, is if I had a really bad injury and realize my time is up. Three – and this is probably most important – is I’ll walk away when I’m not having fun anymore. If it ever starts to feel like it’s more of a job, then I’ll hang them up.

“But the year off really rejuvenated me. There’s nothing better than winning. I mean, if we went 4-10 last year I don’t know if I’d be playing again this year. We have such a great group of guys it’s fun to go to the stadium every single day. There’s just that extra care for the guy beside you. It really is one of those environments you love being around.”

Thomas is coming off the latest in his series of steady campaigns. He played in all 14 regular season games in 2021 as part of the Bombers dominant defensive front, registering 15 tackles and four sacks. He then capped that with one of his best performances as a Blue Bomber in the 108th Grey Cup, finishing with four tackles – including one for a loss – and one sack in the club’s 33-25 overtime victory over Hamilton.

“I told Osh (Bombers head coach Mike O’Shea) earlier in the week that one of the main reasons I wanted to come back – besides knowing that we were going to have a good team and a great chance to repeat – is I was very happy we won in 2019, but I wanted to have a better Grey Cup game,” said Thomas. 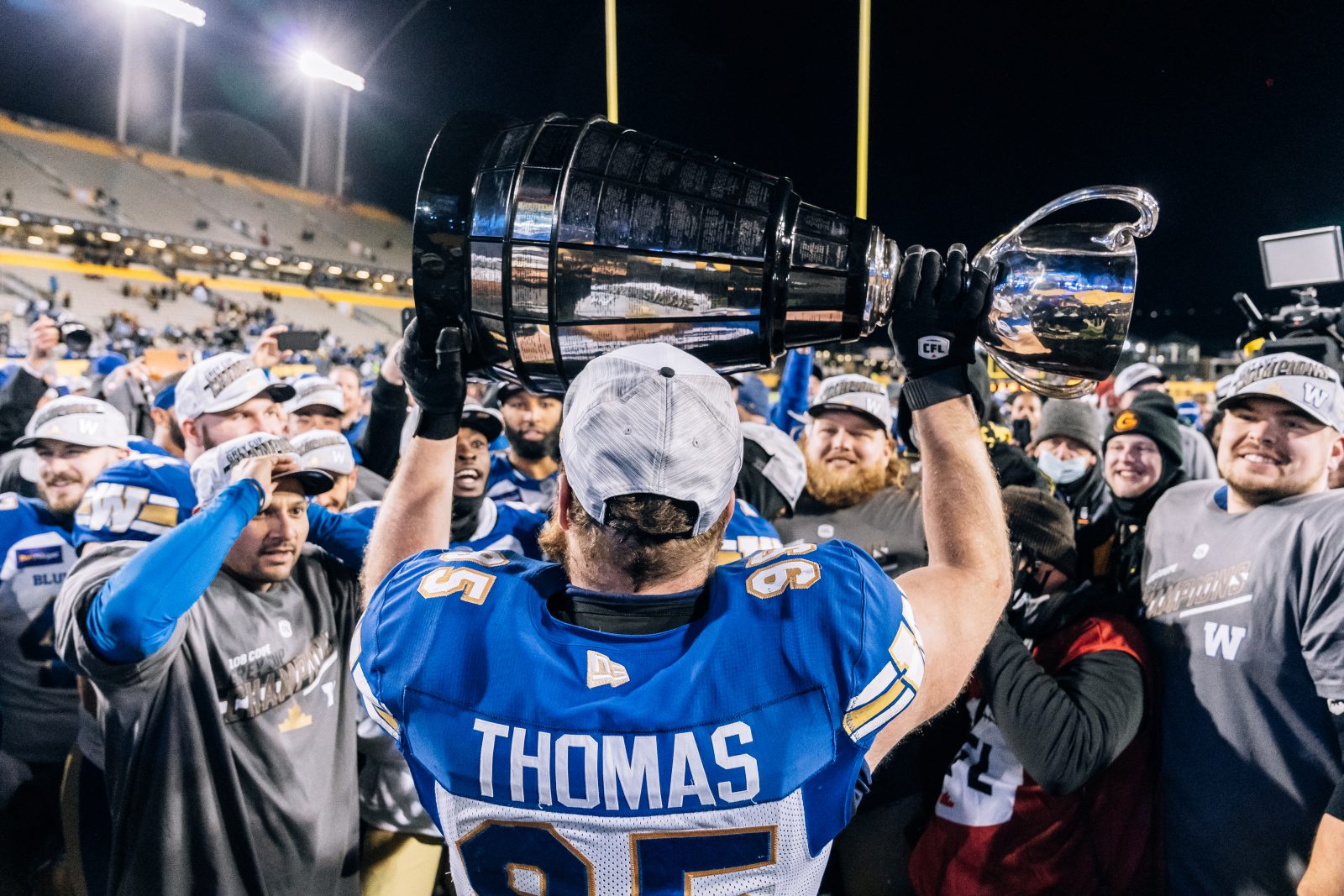 “I’m probably my harshest critic, but I was pretty happy with my second half in this last Grey Cup. It’s just one of those things… we have so many great guys up front and (the Ticats) did a good job of giving Willie and Jackson extra attention and that gave myself and Stove (Steven Richardson) a lot more opportunities to get home.

“I look back at the 2019 game and I was happy we won, but it wasn’t one of those games where I’d put on the film and say, ‘Oh, I made a great play here.’ It was steady, but I wanted to play my best when the best was required.”

Now married and with an eighth-month old son in Emmett, Thomas had 15 family members at the game in Hamilton with all of them able to share his experience.

“It was a cool family moment,” he said. “The last time we won my family had a tough time getting on the field and so when I would have received the trophy none of my family was on the field. One of my buddies jumped over to get onto the field and he was the first person I saw. I saw my wife’s best friend, too, but my parents, my sisters, my brothers, my wife weren’t able to be there. This time it was cool to be on the field with them. I’ve got a few photos of my wife and my little guy with me on the field. That’s the stuff I’ll always remember.”

It’s those moments – beyond the daily grind of a season or the laughs in and around the locker room – that Thomas will cherish the most. Actually, he’s already cherishing them. And there were a couple from Grey Cup Sunday in Hamilton and the aftermath that followed. 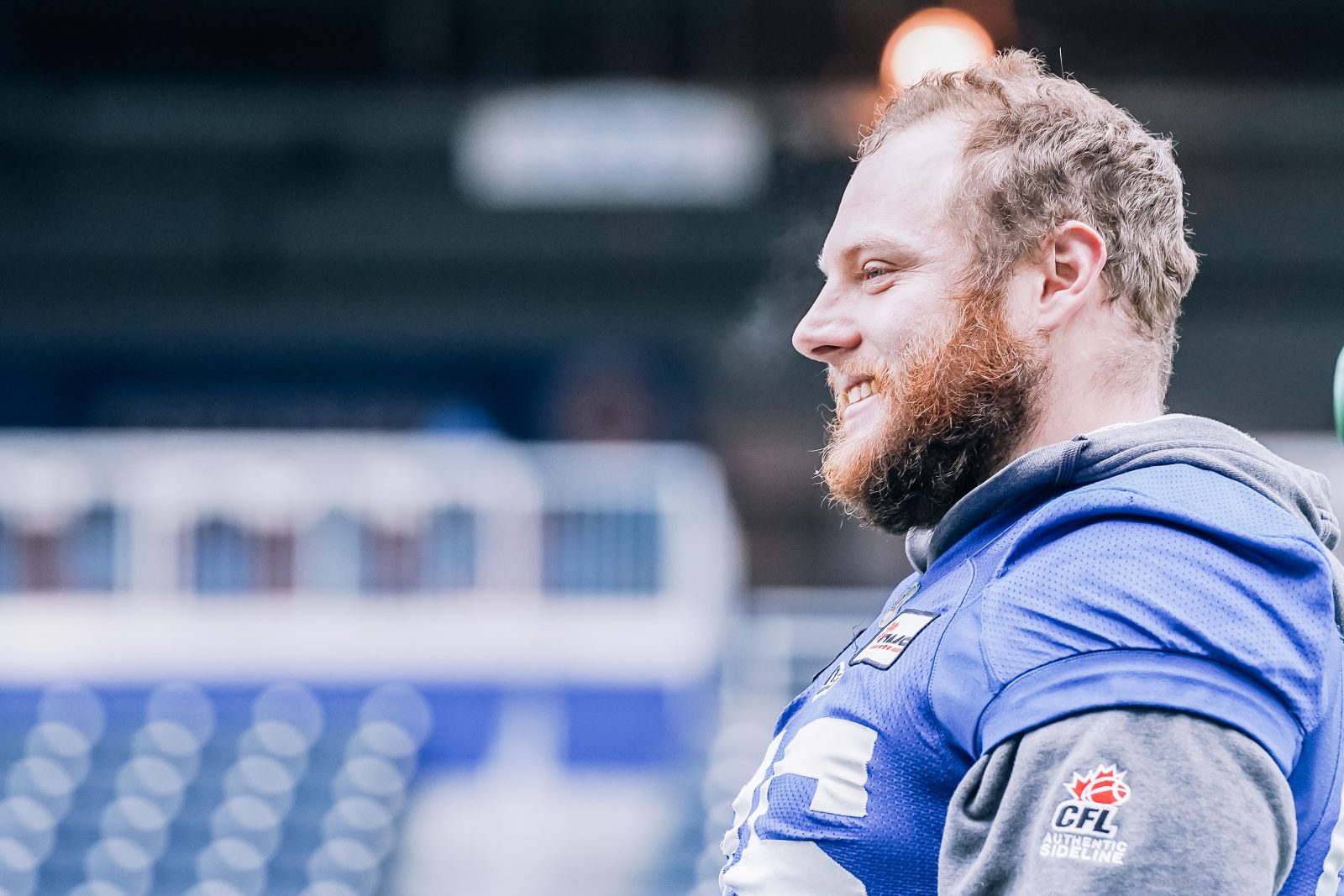 “It’s funny… Osh always talked about it – the first time you win you care about yourself,” said Thomas “You’re happy for your teammates, but it’s ‘I get to hold the trophy’ or ‘I did this.’ But the second time for me it was really cool to watch the guys who hadn’t won before then get to raise the Cup and enjoy it. Osh was right about that. Either way is definitely special, it’s just a different point of view.

“I remember right when the game was over, I was on the field as some of my teammates were coming down from the stage from the trophy presentation and to be able to see a guy like Jesse Briggs put the cup above his head was a pretty cool moment for me. He’s not a guy that shows a ton of emotion and you could see he was pretty excited, and his wife was on the field close to me as he came down.

“Then the plane right back it was seeing someone like Tanner (Cadwallader) with the Cup looking at it closely along with guys like Casey Sayles and Ricky Walker. Both those guys had bounced around with the XFL, the AAFL and playing in leagues where it seemed like they were always getting cancelled halfway through their seasons. We didn’t get to do a bunch of bonding because of COVID, but once you win you have a bond with them for life. That kind of stuff is pretty special to me. It’s why I still keep playing. Those days will never get old.”