Andrew Harris has those obvious God-given gifts which have long been the foundation to a spectacular Canadian Football League career. It’s his vision and football IQ, his hands as a receiver and his ability to find a crease to daylight or grind out extra yards by taking on or avoiding tacklers.

Yet what has long separated him from others – what has driven the Winnipeg Blue Bombers running back to the point now where he is often referenced as a ‘future hall of famer’ – is that trademark chip on his shoulder/fire in his belly. And so it was with the announcement that he was returning to the lineup for Sunday’s home date with the Calgary Stampeders – and for the first time this season – that one thought kept lingering for many: does that fire still burn for Harris, now coming off an injury, and 642 days since he starred in the 2019 Grey Cup win?

Well… chew on this as evidence:

“Pete Costanza (Bombers running backs coach and long-time Stampeders assistant) hasn’t been around me much, and especially on game days,” said Harris in a chat with bluebombers.com. “He was telling me what he thought Calgary might potentially do after being around them for so long. He said that they’re going to be fired up’ and that they have these little slogans they have over there.

“I said, ‘Well, Pete, you’re going to see a different Andrew on game day. I’m not worried about what they’re doing.’ It’s about myself and the guys in our room. On game day I’m not pleasant to be around… I’m going to be full of piss and vinegar on Sunday. It’s been a long time coming and I’m definitely looking forward to it.”

Harris pulled up lame at the outset of Bombers training camp last month and it wasn’t until last week that his workload began to crank up slowly. He split first-team reps at Wednesday’s practice with Brady Oliveira and, after Thursday’s session was closed to the media, primarily watched Friday. It was during and after Wednesday’s practice – a workout in which he looked like vintage Harris – that he was convinced he was ready to return.

As for his fire, he felt it rising last weekend while watching the Bombers lose in Toronto alongside slotback Nic Demski, who remains on the injured list. 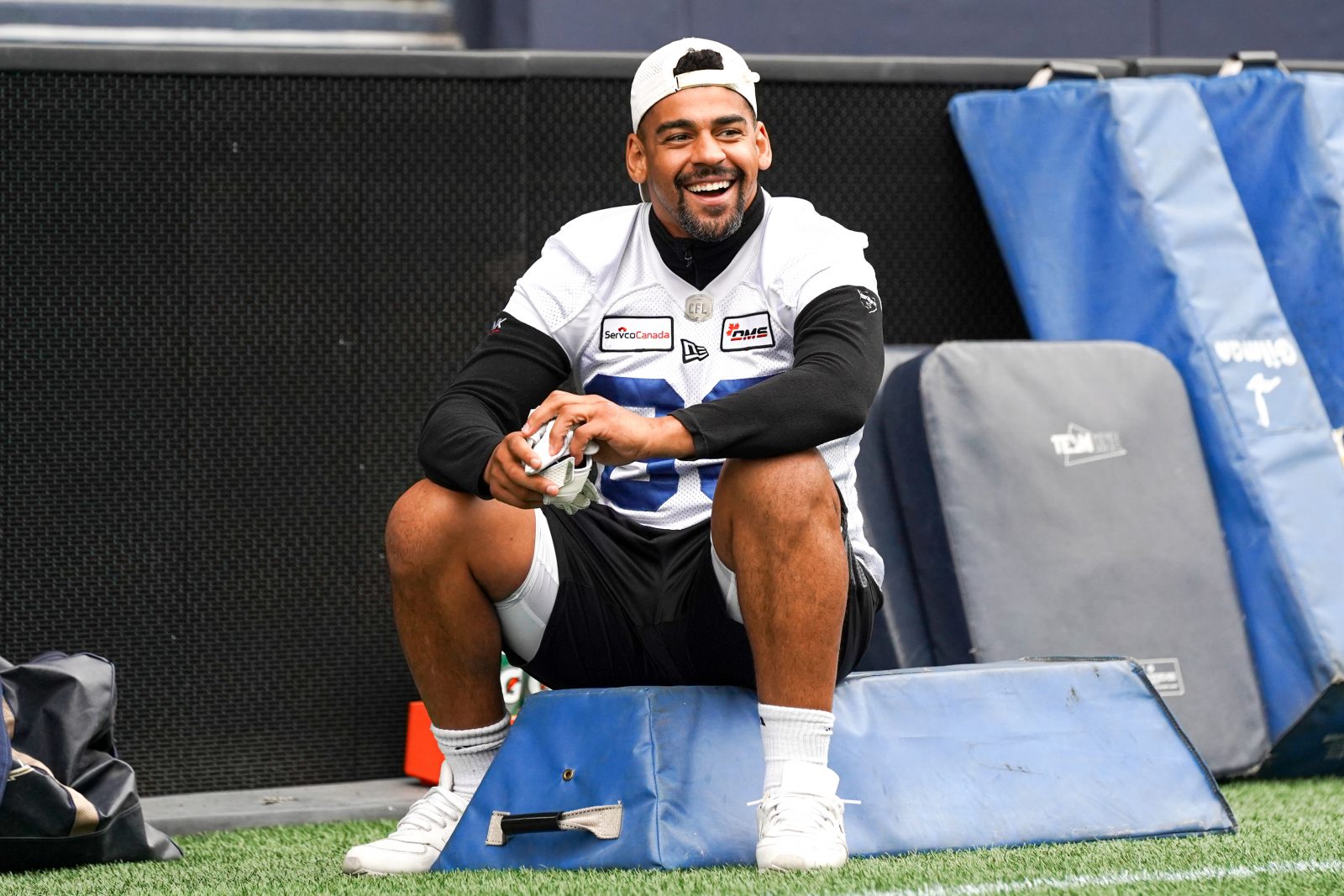 “Our offence didn’t play that great last week and we’re swearing and yelling at the TV… we wanted to be out there and we felt what they were going through but they were 2,000 kilometres away so it was a weird feeling,” said Harris. “Both of us were like, ‘Ahhhh, what are we doing here? This just sucks.’

“Even the day before, the walkthrough, has been tough being around here. Being on the sideline or watching it on TV, you just feel like you’re letting the team down. It’s a weird feeling. It doesn’t feel right. It’s something I HAD to get used to, but it’s also something I haven’t had to do in my career without having too many injuries other than one year when I had season-ending injury in 2014.

“But watching the games also puts things into perspective and you have a different appreciation for what the guys are going through. I appreciate it a lot more, that’s for sure, and after missing three games and most of training camp, I’m definitely chomping at the bit to get out there.

“I’m not taking any moment, any play, for granted. All the highs and even the lows I won’t take for granted. Obviously it’s not fun when things aren’t going well or you’re not playing well, but you appreciate that low when you get out of that slump and have success and victory it tastes that much better.”

Harris has already entered what we call his ‘legacy years’ – that part of his career where every yard, every reception, every touchdown moves him further up the Canadian Football League’s all-time lists.

He is the reigning three-time CFL rushing champ, the league’s all-time leader in yards from scrimmage and rushing yards by a Canadian. On top of all that, he is eighth on the CFL’s all-time rushing yardage list. And when this is mentioned in our chat and that he is on the back nine of his career, so to speak, Harris grinned and said: “I’m just getting started, Ed.” 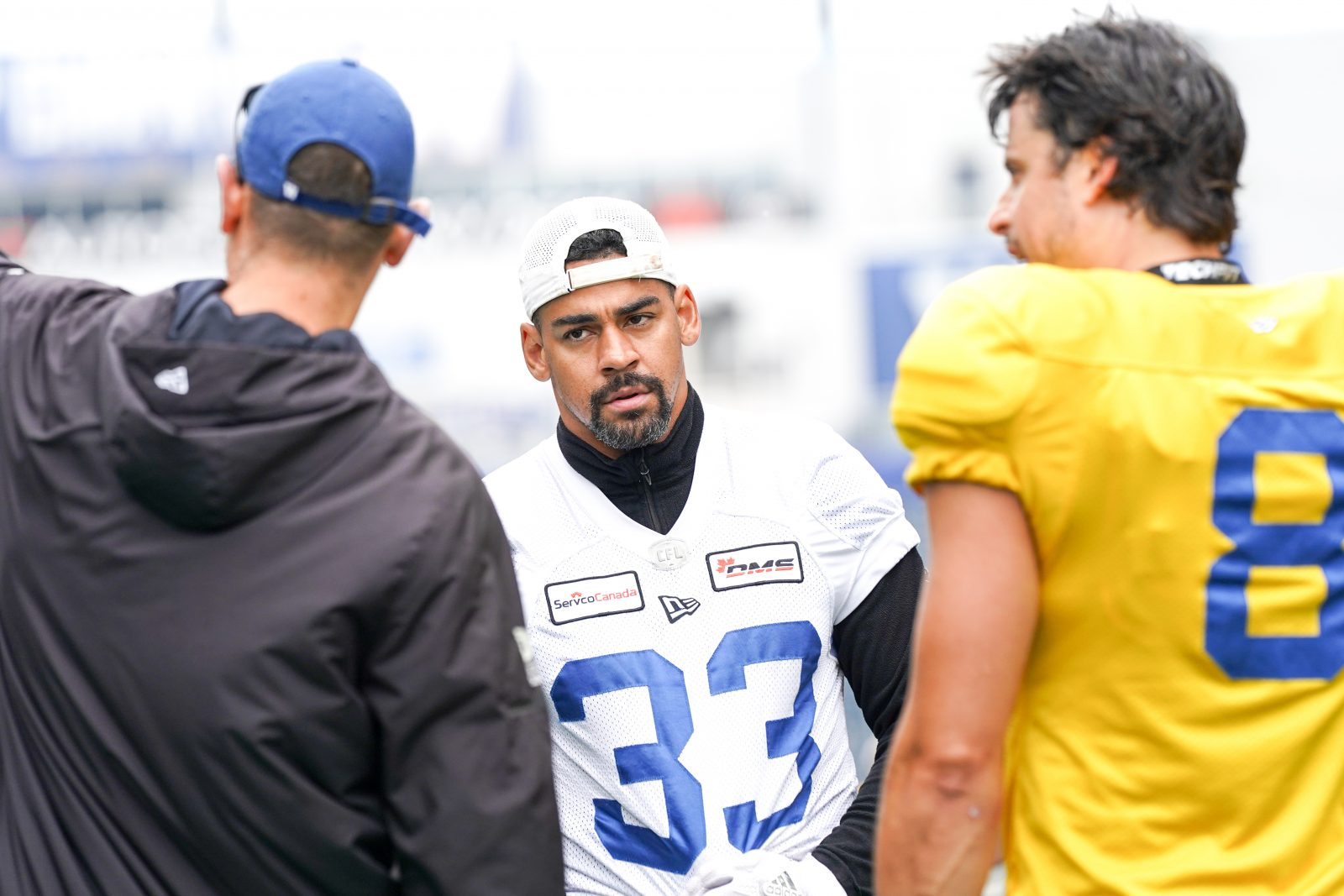 “My goal when I was younger was to play until I was 33 and then retire. And then COVID comes and I’m 34 and coming off an injury… but now that I’m back out there and feeling good I don’t even feel that this would be my last year. I feel like I still have more to give and I still enjoy being around the team, I still enjoy playing the game.

“As long as my body feels great and I can still contribute at a level that’s OK to me… it seems like for a lot of guys they see their game slip away and they don’t feel like themselves. That’s a scary thought to have that during the season, to be watching that on film and thinking ‘That’s not the same Andrew I’m used to seeing.’ Or ‘Why can’t I make that cut? Why can’t I break that tackle?’ But that’s also what drives me right now, to fight past those little fears and demons and those little voices in the back of your mind.

“Looking back at my career, looking back to 2019 and looking forward now I still feel like I can contribute and be a part of this organization and be a leader out there,” he added. “I’ve played a lot of snaps and feel like I can contribute at a leadership standpoint. I’ve seen just about every defensive look and I think that helps make the guys around me more comfortable.”

Harris punctuated this notion that the fire still burns by offering a big-picture take on how he was energized by returning to the locker room before training camp, even if his time on the field was short-lived.

“This is not an easy game. It’s not an easy profession or career choice,” he said “You’ve really got to love it to be out here and be successful.

“That first day, even not being as involved as I have been in the past, I found out how much I missed it. There’s an energy in being part of something successful and you feed off their energy. You see a guy like Yoshi (Jermarcus Hardrick) running around like he’s a 12-year-old boy. You see Darvin Adams and Kenny (Lawler) talking smack to the defence… those are the things I enjoy being around. That’s what I missed. That’s why I’m so excited to be back.”