Michael Couture has a story to tell. It’s a tale about joy, about pain and about battling through all the various stages of grief. It’s about fathers and sons, about the bond of teammates and those snapshot moments in a football career that can be forever cemented into a man’s memory banks.

The Winnipeg Blue Bombers centre also wants it to be a story which reminds everyone not to take for granted the little things in life – things like running out of the tunnel for Sunday’s Western Final against the Saskatchewan Roughriders.

Let’s rewind to just over two years ago for some context… It was October 25, 2019, and the first start for Zach Collaros at quarterback for the Bombers – a game at IG Field which ended in dramatic fashion as the club rallied for a 29-28 victory.

Couture, unfortunately, wasn’t on the field at the end of the game after having suffered a high-ankle tear and medial ligament tear in his ankle in the fourth quarter. And so, his promising first season as the centre of the Bombers’ dominant offensive line – he had started all 18 games after Matthias Goossen had retired – was over before the club’s epic playoff run had even started. The news, incredibly, got worse later that night. Calling home to tell his father Dan that he was going to need season-ending surgery, his dad had his own devastating news to deliver: the cancer he was fighting was terminal. 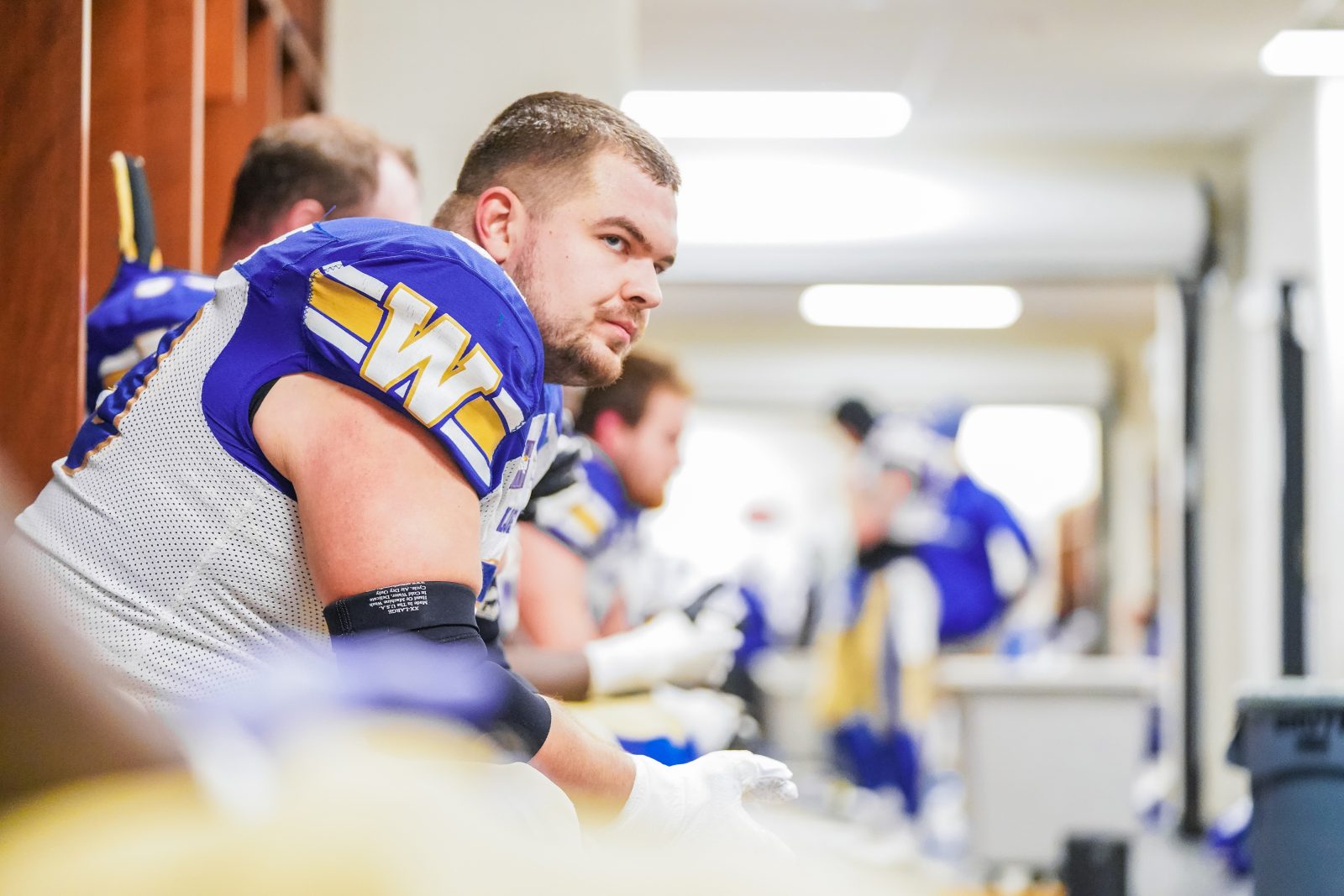 “I had a lot of stuff besides football going on then,” said Couture. “You talk about running out of the tunnel on Sunday… I can remember the pre-game before the West Final in Sask that year. Pre-game is always an emotional time, regardless. It’s the crowd, the noise, their intro pre-kickoff is all wild. But I was there all bundled up, all crutched up, as the guys ran out and I broke down a little bit. Not a lot of people saw it. Marty (Costello, offensive line coach) helped me out and covered me up a bit. I was just overcome.

“It wasn’t all negative emotion. There was excitement for the guys, but also that pain that comes from not being out there with them and missing out – especially after it being in my first year of starting and playing all 18 regular season games. That… that was tough.”

By game’s end – a dramatic 20-13 victory that sent the Bombers to the Grey Cup – Couture was swept up in the victory celebration. But what happened before that game also helped shape his approach into Grey Cup week and beyond.

“I needed that to happen that night,” he said. “Once the ball was kicked off, I was into it. It’s about experiencing and dealing with those emotions as they come up and then being able to move on from them. That’s really important. That was the one time I had that. By Grey Cup I had goosebumps all day because I was so excited to see our guys work and be a part of as much of it as I could.

“We’re ‘next-man up.’ That’s the motto. And I can remember that I was very confident in Cody (Speller, who replaced him at centre). As soon as I got hurt Cody came up to me – pretty much grabbed me – and said, ‘I’m going to give you a Grey Cup effort for the next three weeks.’ I’ll never forget that, and I’ll always appreciate that. And he did just that. He was obsessed with the whole process.” 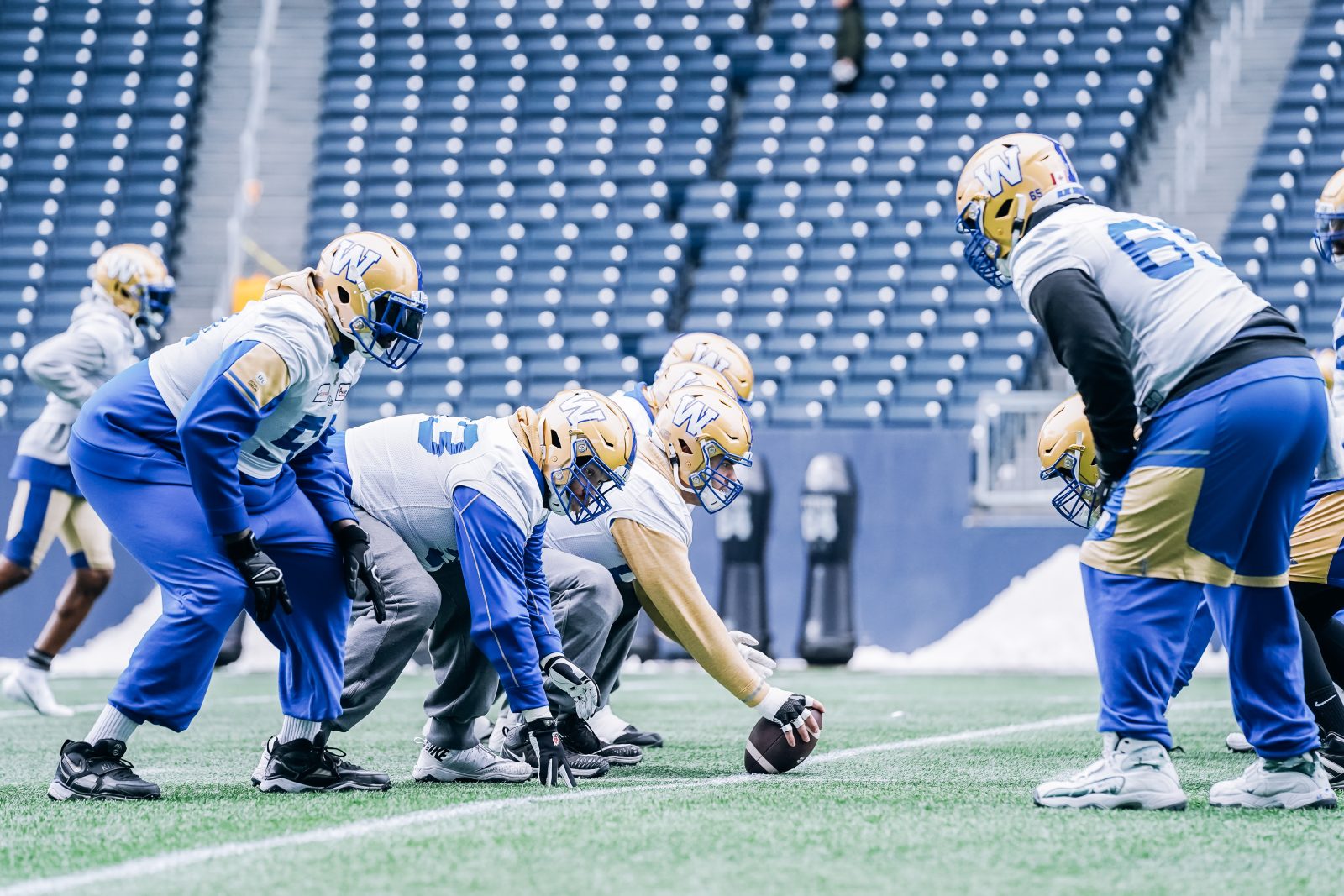 Dan Couture, for the record, passed away in 2020. But not before his son spent a ton of time with him – including on Grey Cup Sunday when he flew in for the game. He was there in dressing room, too, for the Grey Cup celebration.

“I have a video on my phone from TSN… it’s Osh (head coach Mike O’Shea) addressing the team after the game,” said Couture. “Everyone’s crowded around, and my dad and Osh are almost stomach to stomach. My dad has this ear-to-ear grin. It’s my dad, my mom, my girlfriend and me all in that video. It’s picture perfect. It captures him soaking it all up.”

Couture is in such a good place mentally now. He has two bracelets from his dad, one he keeps at home and the other that he wears every time he travels, and also on a game days – including this Sunday’s Western Final. It was during our chat that the conversation turned to grieving and how it’s different for everyone. I mentioned it took a while to get to a place where my memories of my dad – and my mom, too – went from having a gripping heartache attached to all of them to instead eliciting smiles and laughs about all the good moments.

“It’s funny you’d ask me about this right now, because I was thinking about this just two-three days ago,” said Couture. “I almost felt a little bit of guilt that comes with a feeling of… not moving on, but not being so negative about losing him and just focusing on all the positive things like everything he used to tell me, all the good moments. Really, it was just this week that I realized I had moved on to the next stage of my grief. I’ll always grieve the loss of my dad, but it doesn’t always have to be negative. I’m just entering that stage now. I didn’t feel like I had a choice but to get to this point. You’re either going to stay stuck in the mud, or you work to get out of it. It happened gradually.

“There’s always going to be things that come up,” Couture added. “It’s one of the things my dad taught me – to deal with your emotions and not stuff them down. When you do that, they don’t go away, they’ll come back up at some point, so deal with it when you feel it.

“I feel like I’ve done that over the last year and a bit. And I’ll be thinking about all of that – all of it – when I come out of that tunnel on Sunday.”