Al Mourtada discovered something along the way from packing up his cleats and bouncing from one combine and kicking camp to another, from a training camp invite here, to an open tryout there: Even now, at age 31 and still trying to find a football home – the latest opportunity coming here with the Winnipeg Blue Bombers – there is simply a pure joy he gets from working at his craft.

And that is no better represented than the answer he gave Monday during a media Zoom call to the question about why he keeps chasing this dream.

“I still work as a personal trainer by day, that’s how I made my money, paid my bills,” he explained. “But I learned a lot to develop as a kicker and I just saw myself getting better and I absolutely love it. And if I was the last person on earth, I’d still be kicking. I repeat myself and I sound like a broken record, but just doing the work is something I love doing so I just take it one day at a time.”

Mourtada’s journey to Winnipeg has taken him from Sierra Leone – where he spent the first four years of his life before his father packed up his family and fled from the civil war there to Massachusetts – to Pace University and Assumption College to tryouts with the Cleveland Browns and the Washington Football Team in the NFL, to XFL looks, to stints with indoor teams like the Las Vegas Outlaws, the Wichita Falls Knighthawks and most recently with the Massachusetts Pirates of the National Arena League. 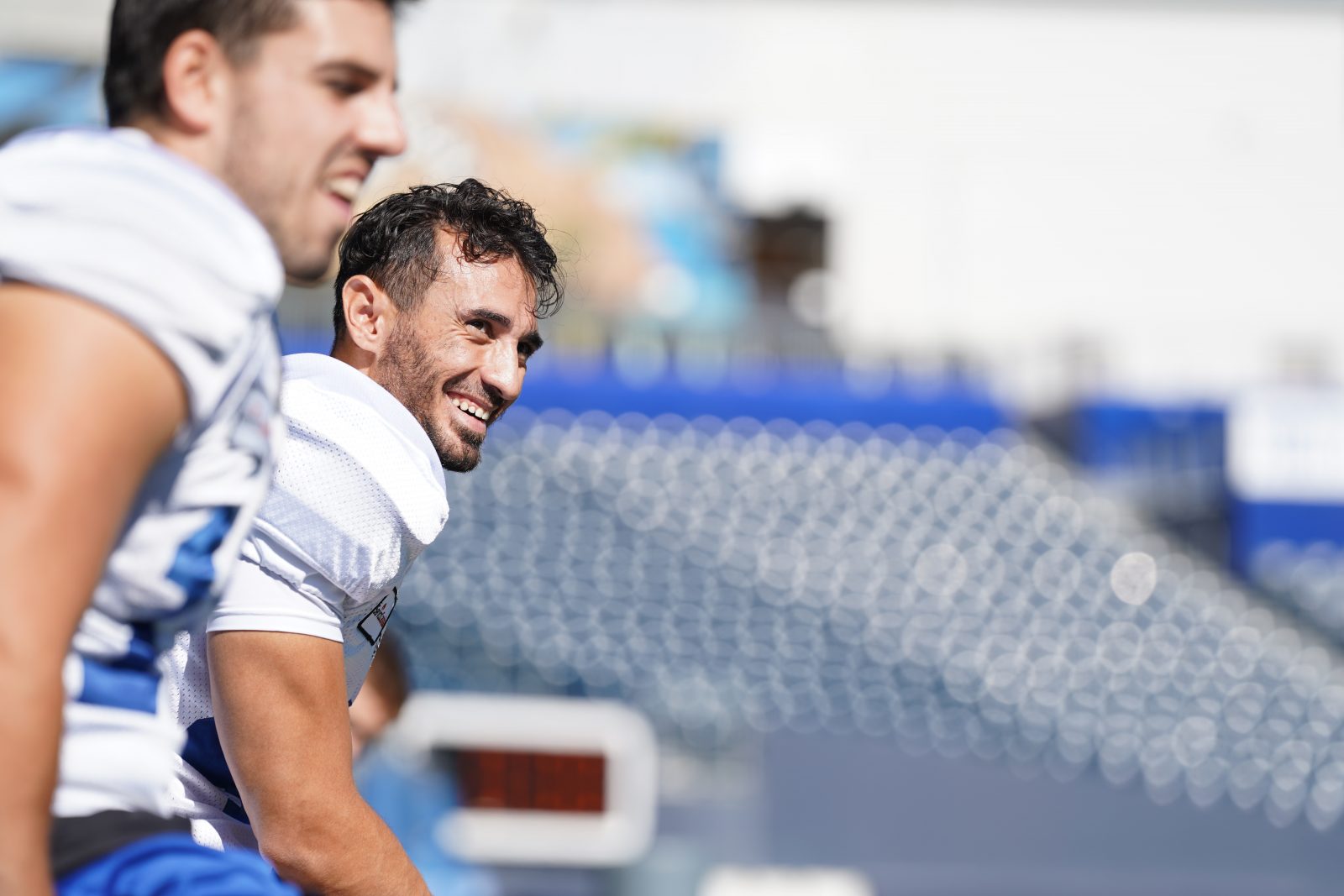 Along the way, there have been countless kicking camps and combines to fine-tune his game and continue to pursue his dream.

“(It’s been) a grind and a rollercoaster. For me it was focus on what I can control and that was developing as an athlete, as a kicker, as a pro. So I sought out coaching, put the time in on the field and in the weight room and that’s really all I can control, so that’s where all my focus was. So, from the outside it might have looked one way, but I was just committed to it and it’s helped me get here so I’m thankful for that.”

Mourtada could be in the lineup for the Bombers as soon as this Saturday’s game in Edmonton against the Elks. Marc Liegghio is 5-of-8 in his field goal attempts and his convert attempts so far this season. Before that Tyler Crapigna was 3-of-5 in his tries.

“He’s a very likeable guy,” said Bombers head coach Mike O’Shea on Mourtada’s first full day practising with the club. “You like his perseverance understanding that Paul Osbaldiston (the Hamilton Tiger-Cats great) got cut a few times before he ever kicked his first. Mike Vanderjagt (former NFLer/Toronto Argonaut), same thing.” 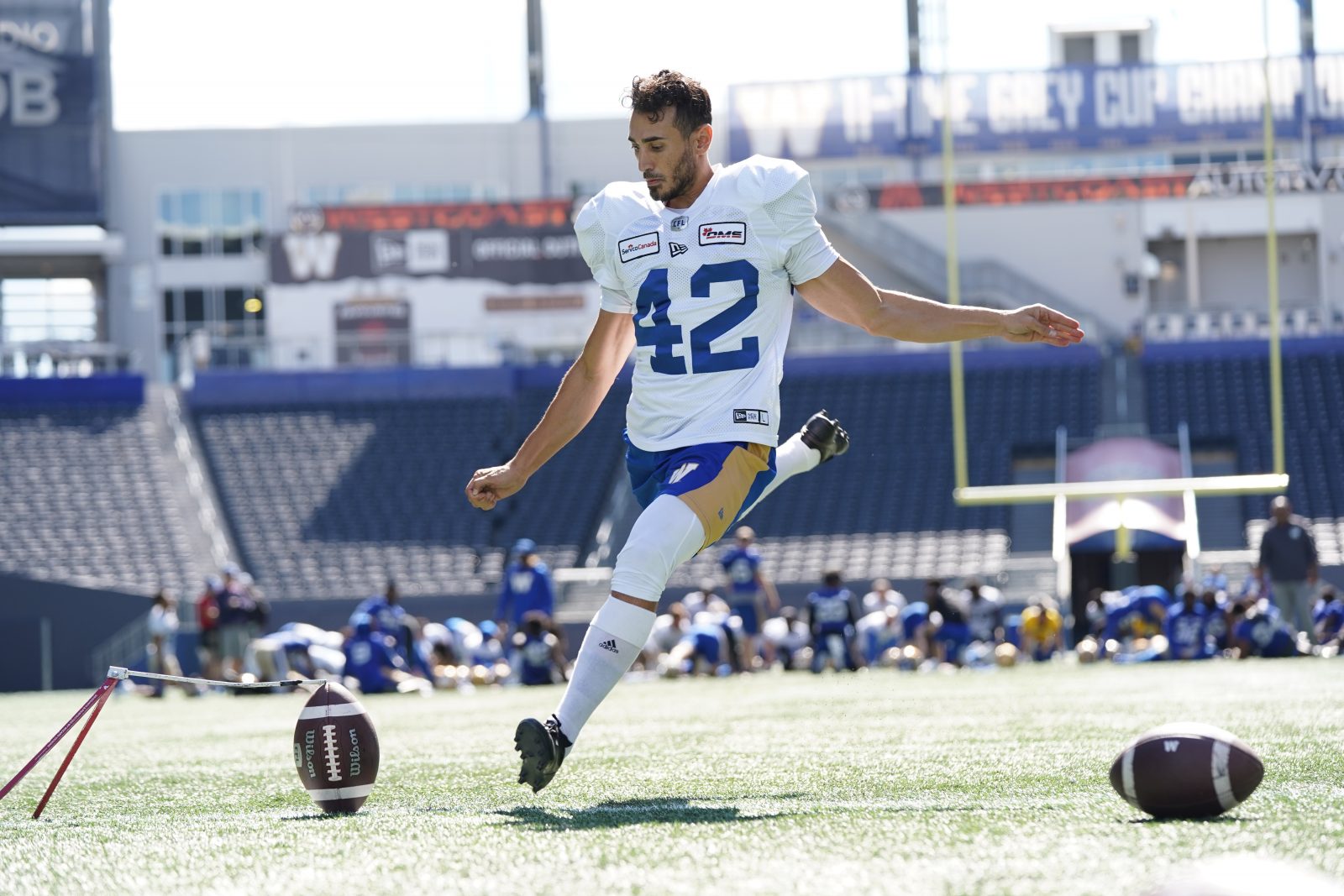 “It takes a while to get your opportunity, some guys longer than others. He’s managed to stay in it long enough to get another one, which is admirable for sure. He seems like a very personable guy, good guy. He kicked today and it looked good.

“(Liegghio) looked good today, too,” O’Shea added. “Obviously he’s going to continue working on his game and his process. If you look at historically how he’s been in (U-Sports) he’s been absolutely phenomenal, so I imagine he’ll get back to that, I really do.”

Both kickers took turns before and after practice on Tuesday and O’Shea wasn’t willing to make any concrete conclusions, especially as Mourtada got used to working with a battery in front of him in long snapper Mike Benson and holder Sean McGuire. Wednesday’s session is closed to the media and then the last full practice is Thursday before the team travels on Friday.

No matter what, Mourtada’s routine will remain the same: head down, do the work, and then hope for an opportunity.

“It’s a great opportunity. The team has welcomed me in as family. But from there it’s day by day process, staying in the routine and if any opportunity presents itself, just be ready to go.”