MONTREAL – It wasn’t at all unexpected, especially given a Winnipeg Blue Bombers lineup that was without nine starters, with a quarterback making his first professional start and a constant rain that just made the day that much more miserable. Fielding a lineup that was without – inhale here – quarterback Zach Collaros, running back Andrew Harris, offensive linemen Stanley Bryant and Pat Neufeld, defensive linemen Jackson Jeffcoat and Steven Richardson and defensive backs Nick Taylor, Deatrick Nichols, and Brandon Alexander, the Bombers had their nine-game winning streak snapped  in a 28-14 loss to the Montreal Alouettes at Molson Stadium Saturday afternoon.

“We came to this game obviously with a different roster and a little bit of a different mindset,” said linebacker Adam Bighill. “It was about getting guys more reps, more looks, getting some guys some more fresh legs and things of that nature. But make no mistake, we still brought guys and came here to win a football game, which we didn’t do. We came here to win so we’re disappointed in our effort.”

The result has no impact on the Bombers in the standings – they’ll still finish first in the West Division and host the Western Final on December 5th – but they do drop to 11-2. Montreal, meanwhile, improved to 7-6 and remains in the fight for a home playoff date in the East Division. The Bombers turned the ball over five times – four interceptions and one fumble – in the critical stat line of the afternoon.

“You win or lose for very specific reasons and this one was probably the turnover ratio,” said head coach Mike O’Shea. “The turnover margin hurt us today and those are very specific things that we’ll look at on film and realize that we’ve been on the winning edge of that quite often and today we were on the wrong end of it.

“I like the way we battled. The roster changes is what it is. We came here expecting and preparing to win the game and then we had to make a few other changes, but I think we battled very hard. What they’re going to see on film is good, hard work and competitive every play. The outcomes of the plays weren’t exactly what we needed.” 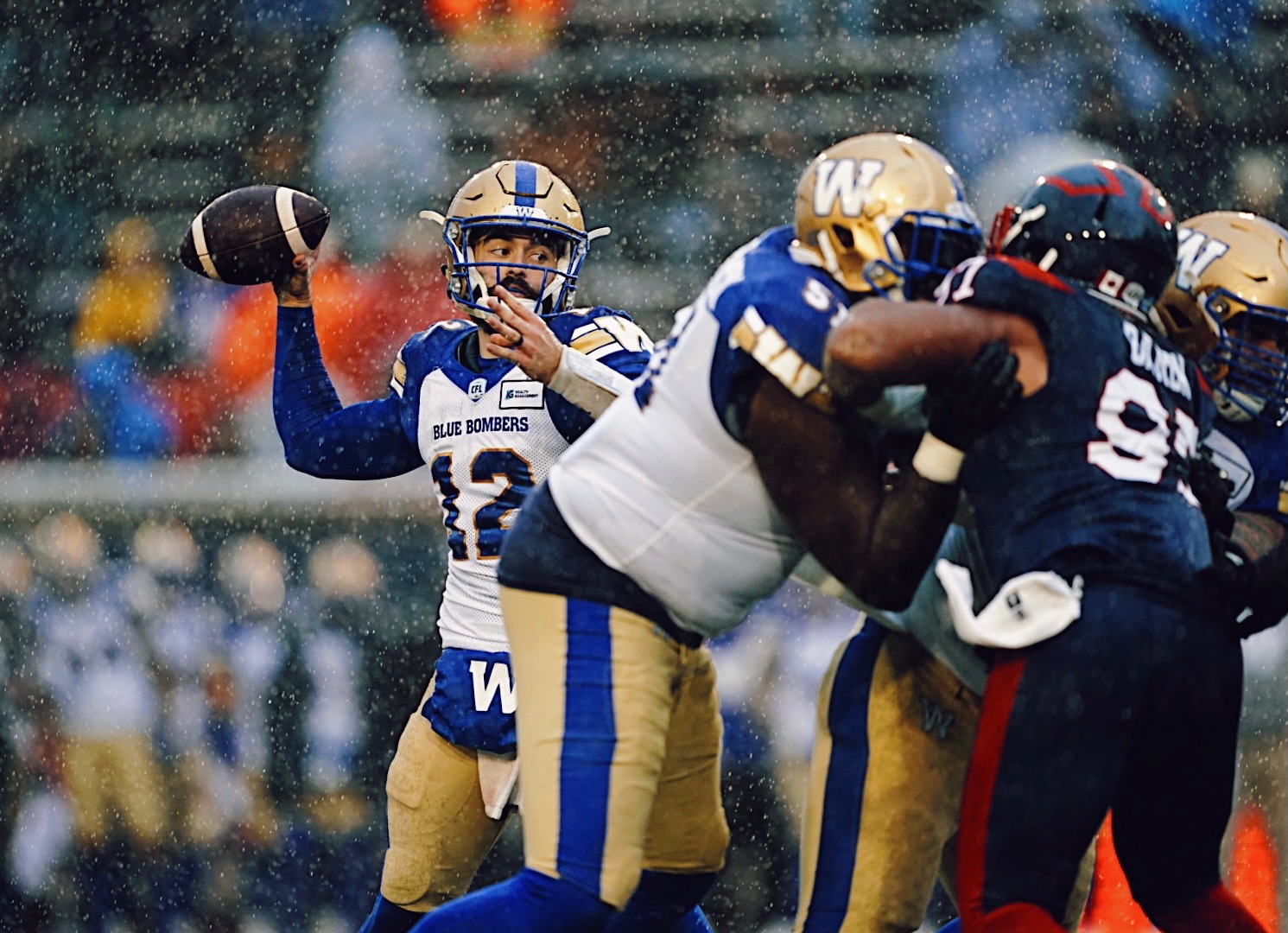 What will be interesting now is if the loss impacts the decision making regarding the roster leading up to next week’s regular season finale in Calgary against the Stampeders as the club certainly won’t want to enter the playoffs on a two-game skid. Asked if the result on Saturday will impact the roster decisions next Saturday, O’Shea said: “No, it doesn’t change. Right now it doesn’t change the plan we’ve got going forward.”

Sean McGuire got the start at QB for the Bombers in place of Collaros, who remained in Winnipeg, and  struggled to find any rhythm as the offence could not consistently stay on the field. The second year pivot completed 11 of 26 passes for 149 yards with one TD and four interceptions. McGuire did find some life on one series in the fourth quarter, connecting with Kenny Lawler for a 42-yard gain and then Darvin Adams for a 30-yard TD strike on consecutive throws. But that was followed up with interceptions on three consecutive series.

“It was a tough game. Disappointing,” said McGuire. “If there’s a silver lining in it it’s learn from the positives and obviously the negatives and grow and get better because of it.”

The Bombers surrendered their first fourth-quarter touchdown of the year on a Trevor Harris to Reggie White, Jr. eight-yard TD, that score coming after Shaq Cooper fumbled a punt that was recovered by the Alouettes on the Winnipeg 46-yard line. The Als added a David Cote field goal with 1:53 left. Even with that, the Bombers have still out-scored their opponents 123-16 this season.

“We didn’t take care of the football well enough, we didn’t force enough turnovers,” said Bighill, who had reps on defence carefully managed on Saturday. “While we did some good things on defence we gave up too many second-and-shorts and they had a couple of long drives we really didn’t want them to have. Overall, we’ve got to play a cleaner football game.

“The guys in our room are pros and prepare for these moments and when they get the opportunity to come out and play they’re ready  to go. It’s something that we expect all guys  to come out and perform. This is about continuing to level up one game at a time all the way through to playoffs so we’re playing our best football in a couple weeks. This was a part of that process.” 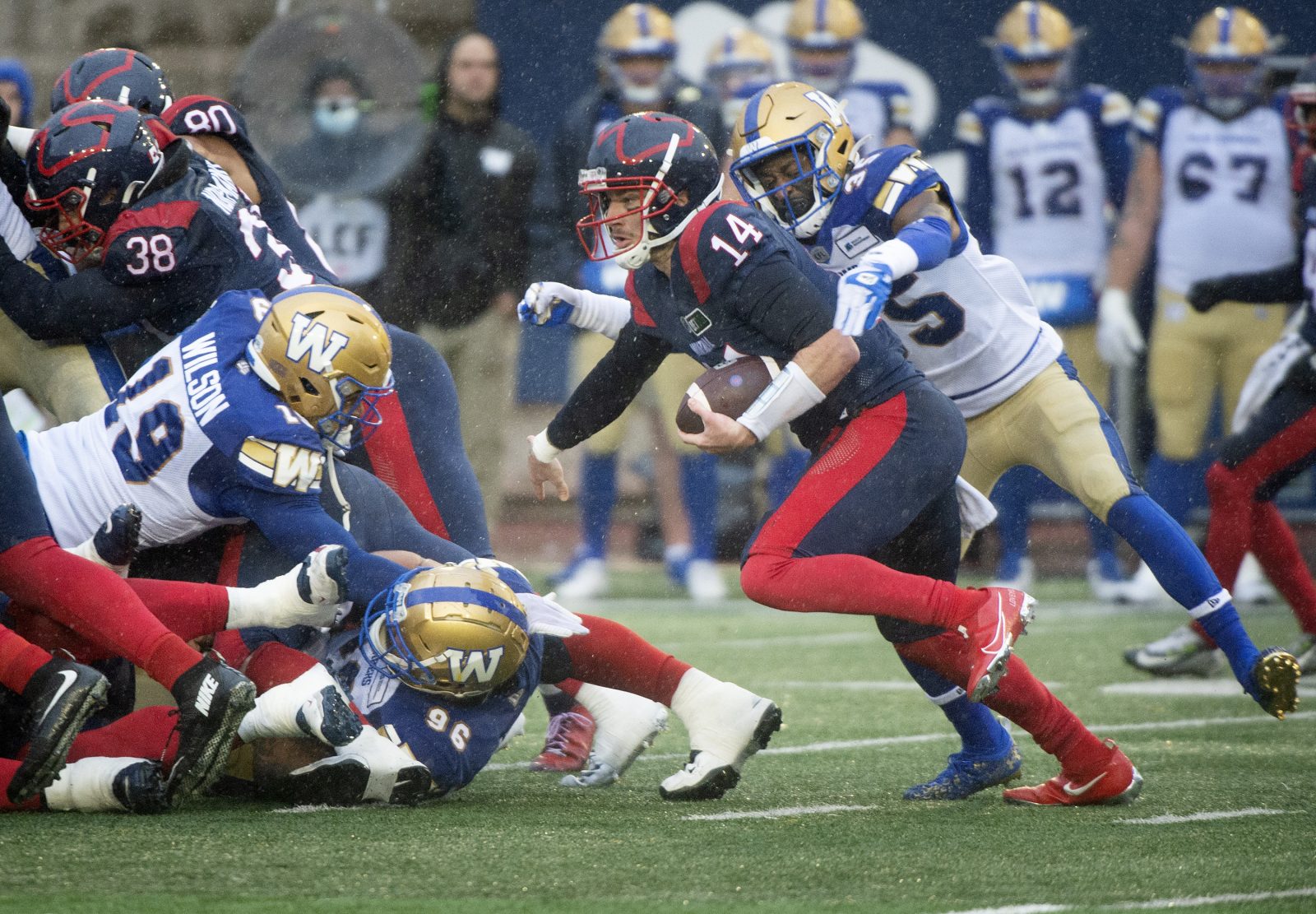 The Bombers lost the turnover battle badly, giving up five turnovers and forcing only one.

The Bombers’ inactive player was LT Stanley Bryant, breaking his consecutive games streak for Winnipeg at 102. Bryant isn’t injured and was replaced by Drew Richmond, who did not finish the game after injuring his knee in the first quarter. Also injured was DB Noah Hallett.. The Bombers had a four-game win streak on the road snapped and are now 4-2 away from IG Field this season… Nic Demski had one catch for four yards, extending his consecutive games streak with at least one catch to 23.

65: The Bombers limited William Stanback to 65 yards rushing on 18 carries, a 3-6-yard average.
3: Sacks by the Bombers, two by Jonathan Kongbo and a third from Ricky Walker.

NEXT: The Bombers are on the road again next Saturday in Calgary against the Stampeders. Kickoff is 6 p.m. CT.