They spit it up and coughed it up and – perhaps caught up in the holiday spirit – the Winnipeg Blue Bombers certainly seemed all too willing to gift-wrap and give away a berth in the 108th Grey Cup.

Yet when it mattered most, and with their season at risk of being snuffed out a week too early, the Bombers overcame all their self-inflicted wounds by doing what they have done so often in 2021: they imposed their will on the Saskatchewan Roughriders in a 21-17 Western Final victory in front of 31,160 diehards at IG Field that had more twists and turns than the Assiniboine River.

Even with a whopping six turnovers, the Bombers did enough earn the right to defend their championship in next Sunday’s Grey Cup at Tim Hortons Field. They’ll meet the hometown Hamilton Tiger-Cats in a rematch of the 2019 Grey Cup, as the Tabbies knocked off the Toronto Argonauts 27-19 in the Eastern Final.

“This rivalry is as big as it gets, and this win right now feels great,” said Bombers linebacker Adam Bighill of beating their Prairie rivals. “It’s exactly what we wanted – to get to go to the Grey Cup. But at the end of the day this rivalry is something special. You can feel it. You saw it out on the field. It’s chirpy, it’s nasty, it’s physical and that’s what makes it so fun. Having them come to our place and getting this win and how we did it… very special.” 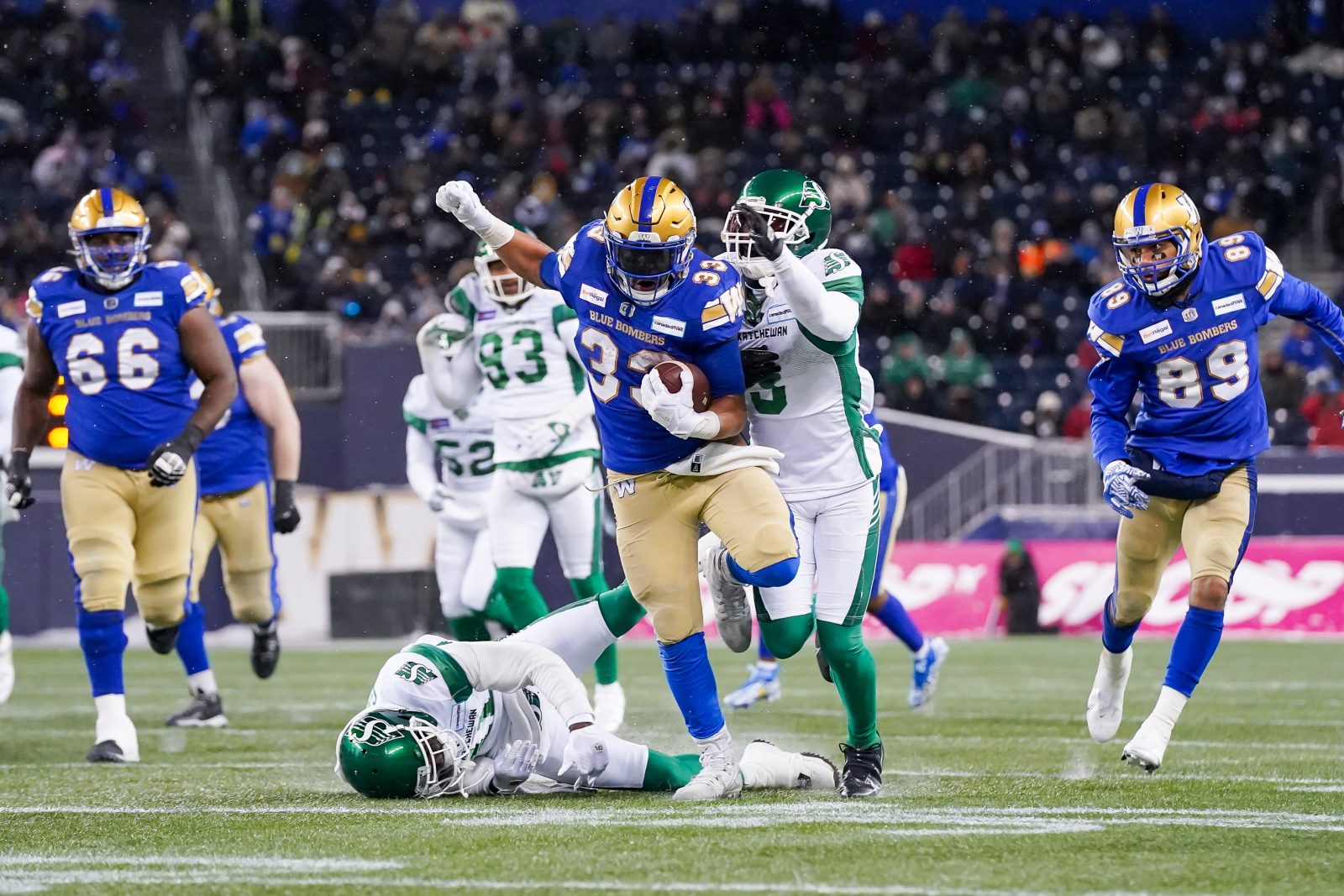 It didn’t come without the scratching and clawing for every yard that made this game feel so much like the epic 2019 divisional final between these two teams in Regina. The Bombers’ six turnovers included three interceptions by Zach Collaros, fumbles by Drew Wolitarsky and Rasheed Bailey and a turnover on downs after the club tried to catch the Riders with too many men on the field with a quick snap to punter Marc Liegghio in which he came up short.

Amazingly, the Bombers were down only 10-7 at the intermission despite five turnovers and trailed 17-14 after Cody Farjardo connected with Duke Williams for a 67-yard touchdown on the final play of the third quarter. That’s when the Bombers brought down the hammer to punch their ticket to the Hammer, out-scoring the Riders 7-0 in the fourth quarter courtesy a Sean McGuire QB sneak TD while controlling the ball for 11 minutes and five seconds and converting six of eight second-down opportunities.

Asked what it says about this club that it was able to overcome so many offensive mistakes and still grind out a ‘W’, Andrew Harris offered this: “It means we’re resilient and we’ve got thick skin and there’s no quit in our team. We didn’t give up, we didn’t falter. We came in at halftime, just looked around and said, ‘Hey, what are we doing here, guys?’ We were just making small mistakes, little things, and came out in the second half with a different attitude.”

Harris, it should be said, was phenomenal in his return to the lineup since mid-October with 23 carries for 136 yards and a TD.

“I’ve been in this league for a long time and played a lot of snaps and know that it’s win or go home in these situations. There’s a certain attitude, a certain feeling you get in playoff time… I never want to go home in these situations. I want to give it all I have. That energy, that enthusiasm, that fire in your belly just elevates and your play comes out after that.” 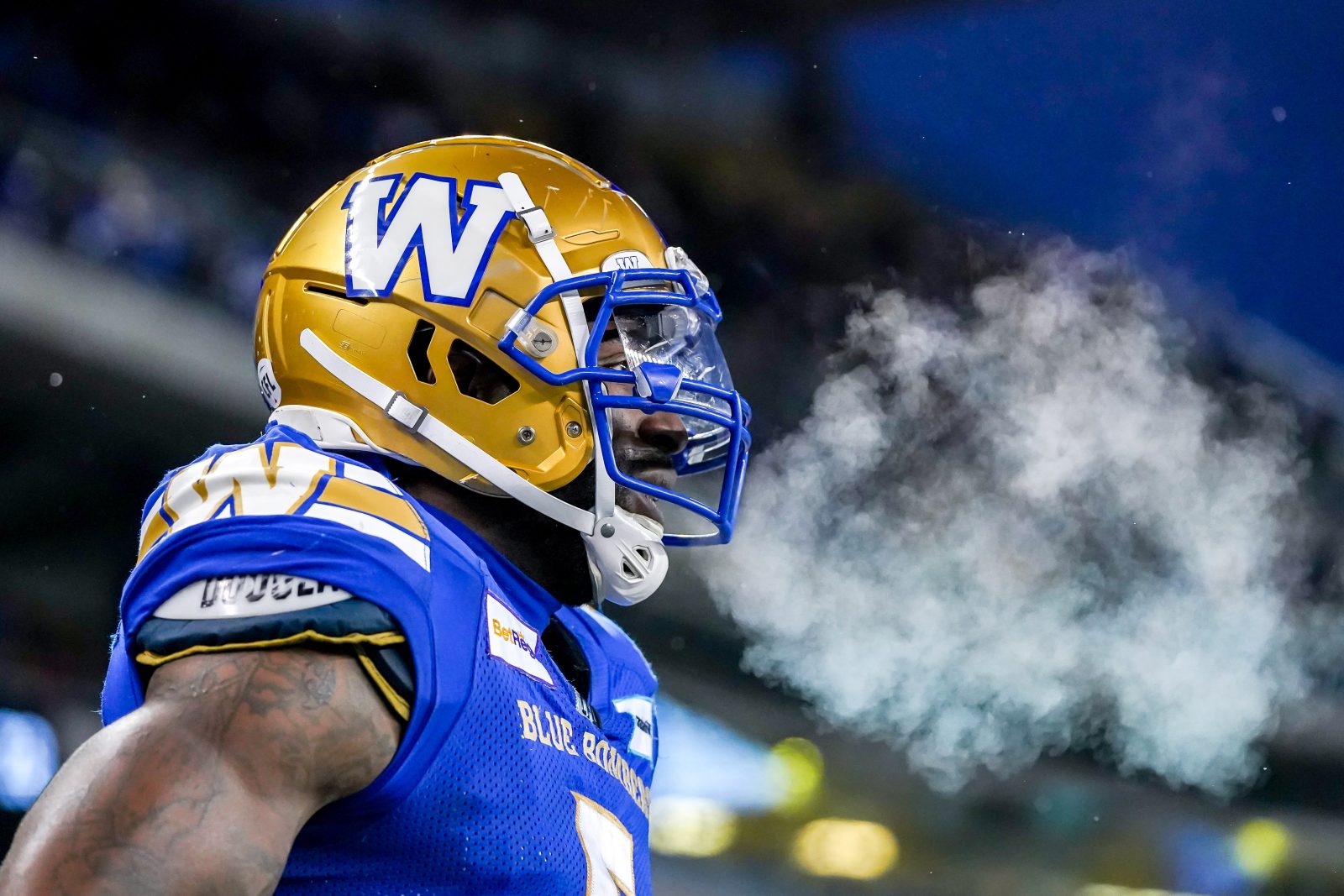 “It’s a team game. Our O-line was prepared today. No matter who was running the ball they would have had success tonight. All five, seven guys that were in at O-line tonight were amazing.”

All of this means the Bombers will appear in back-to-back Grey Cups for the first time since 1992 and 1993 – both losses – and will have a chance to become the first Canadian Football League team to win consecutive titles since the 2009-10 Montreal Alouettes.

“That’s a good lesson. There’s a couple things to take away from that,” said Bombers coach Mike O’Shea of overcoming the turnovers. “One is, just move on and focus on the next play; understand the situation and move on. And two, we have to play cleaner or it’s not always going to look like that.

“They trust each other as a team and they have each other’s backs. That’s very important. That gets tested. Don’t get me wrong, that gets tested in a game like this. But if I look back at how they passed this test compared to how other teams I’ve been associated with would fare on that test… it’s amazing. It’s not just the outcome. I’m talking about how they figured it out, stuck together and got it going.”

The Bombers advance to the Grey Cup despite finishing -4 in the takeaway/giveaway ratio; turning it over six times and forcing two of their own.

The Bombers were trailing 10-7 at halftime and the Riders opened the second half by marching into Bombers territory. Saskatchewan QB Cody Fajardo missed a wide-open Duke Williams at the Winnipeg four yard line in what would have been a sure TD. On the very next play Jackson Jeffcoat strip-sacked Fajardo, with Jake Thomas recovering the ball at the Winnipeg 37-yard line. Instead of being down 17-7, the Bombers were still hanging tight. 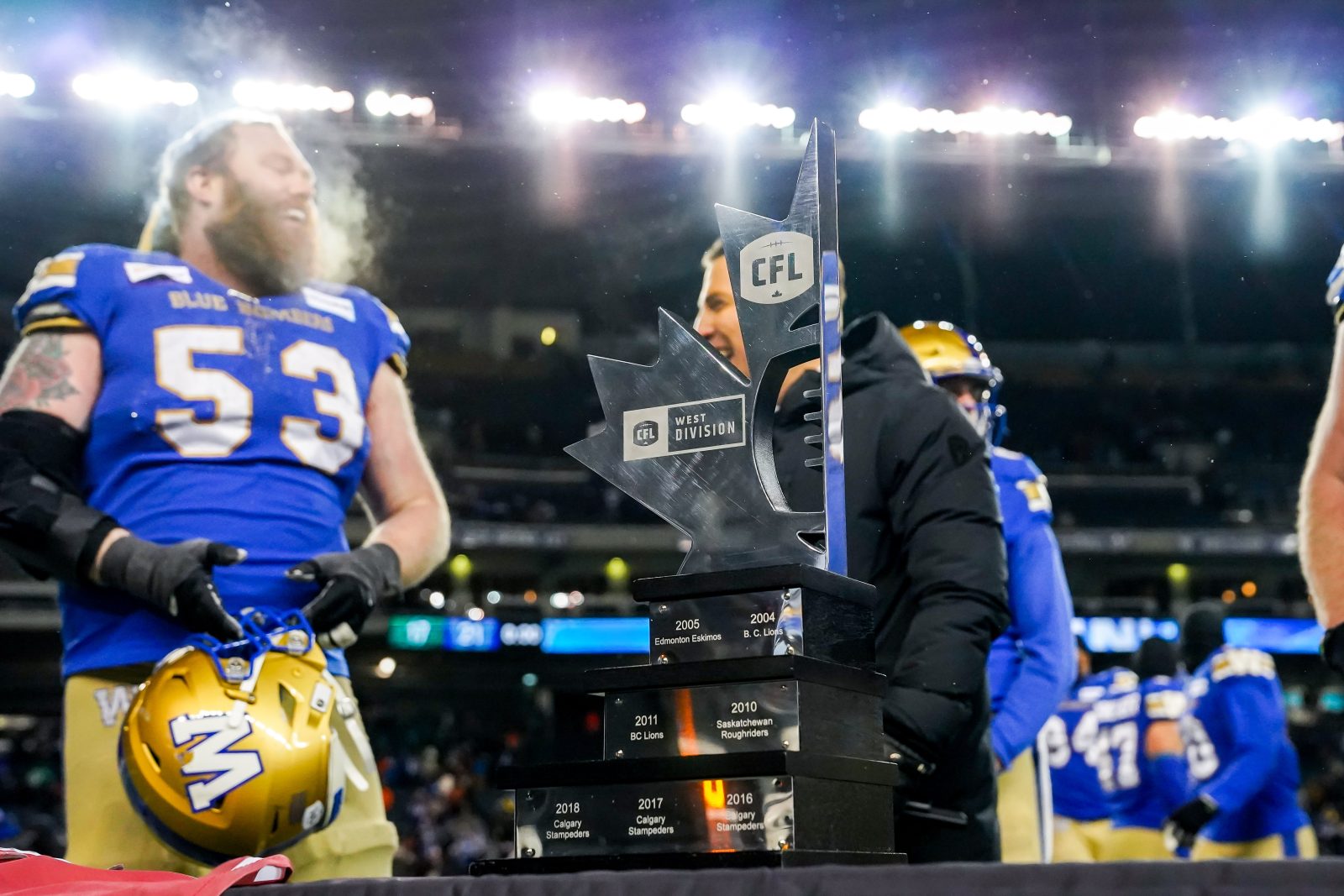 The Bombers and Riders got into a bit of a dust-up as the first half ended, with Saskatchewan receiver Duke Williams poking safety Brandon Alexander in the eye.
“Unfortunately, I’ve seen too many things with Duke over the last couple years where he’s doing that extra stuff,” said Adam Bighill. “I think he’s a great player, but if he cut that out of his game, I think people would respect him a lot more… the victory for us is not retaliation, it’s going to the Grey Cup.”

173: Yards rushing by the Bombers – 136 from Andrew Harris, 22 from Nic Demski, with Rasheed Bailey and Sean McGuire each rushing for eight yards.
17-of-21: Zach Collaros completed 81 percent of his passes. Amazingly, three of his four incompletions were interceptions; the other was a drop.
68%: The Bombers completed 15-of-22 second-down conversions, good for 68 percent. By comparison, Saskatchewan was 6-of-19, for 32 percent.
5: Sacks by the Bombers – one each from Jonathan Kongbo, Willie Jefferson, Alden Darby, Jackson Jeffcoat and Jake Thomas.
21: Riders QB Cody Fajardo was able to move around the pocket and deliver some strikes, but was also limited to just 21 yards on six carries.