Andrew Harris is back and the Winnipeg Blue Bombers are slowly starting to flash some of their old magic again. And, yes, one is absolutely positively linked to the other. It was far from perfect,  but the Bombers rallied for a dramatic 18-16 win over the Calgary Stampeders in front of 22,806 at IG Field on a spectacular Sunday night in south Winnipeg.

Overcoming a serious case of the dropsies on offence and a gritty performance by Stampeder QB Jake Maier – making just his second pro start – the Bombers got a 45-yard field goal by rookie Marc Liegghio with just 37 seconds remaining to improve to 3-1 on the season. Maier almost counter-rallied the Bombers late dramatics, leading the Stamps into a position to win it, but a 53-yard field-goal attempt by Rene Paredes came up just short.

“That’s the first game (as a placekicker) you dream of,” said Liegghio, who was good on all four of his field goal attempts after missing a convert to open the game. “I never thought my first game would come to that. I’m just glad I made all my field goals and helped the team get the win.

“I missed (convert) early on and I wanted to make sure I was going to be perfect from that point forward. I’m just glad I helped the team out the way I did. It’s a pretty exciting feeling hitting the game winner and I’m going to remember this moment forever. It’s a surreal feeling what’s going on right now. It’s amazing.”

Liegghio’s late-game heroics added to what had been a topsy-turvy start to his pro career. The 2020 Bombers draft pick came into training camp touted as the club’s kicker of the future, but was inconsistent at the outset and then watched as veteran Tyler Crapigna was airlifted in following his release by the Montreal Alouettes. Crapigna opened the season handling all the placekicking duties while the rookie concentrated on the punting. But when Crapigna injured a hamstring this week the entire kicking workload landed at Liegghio’s feet and he delivered with makes from 50, 42, 37 and the game winner from 45. 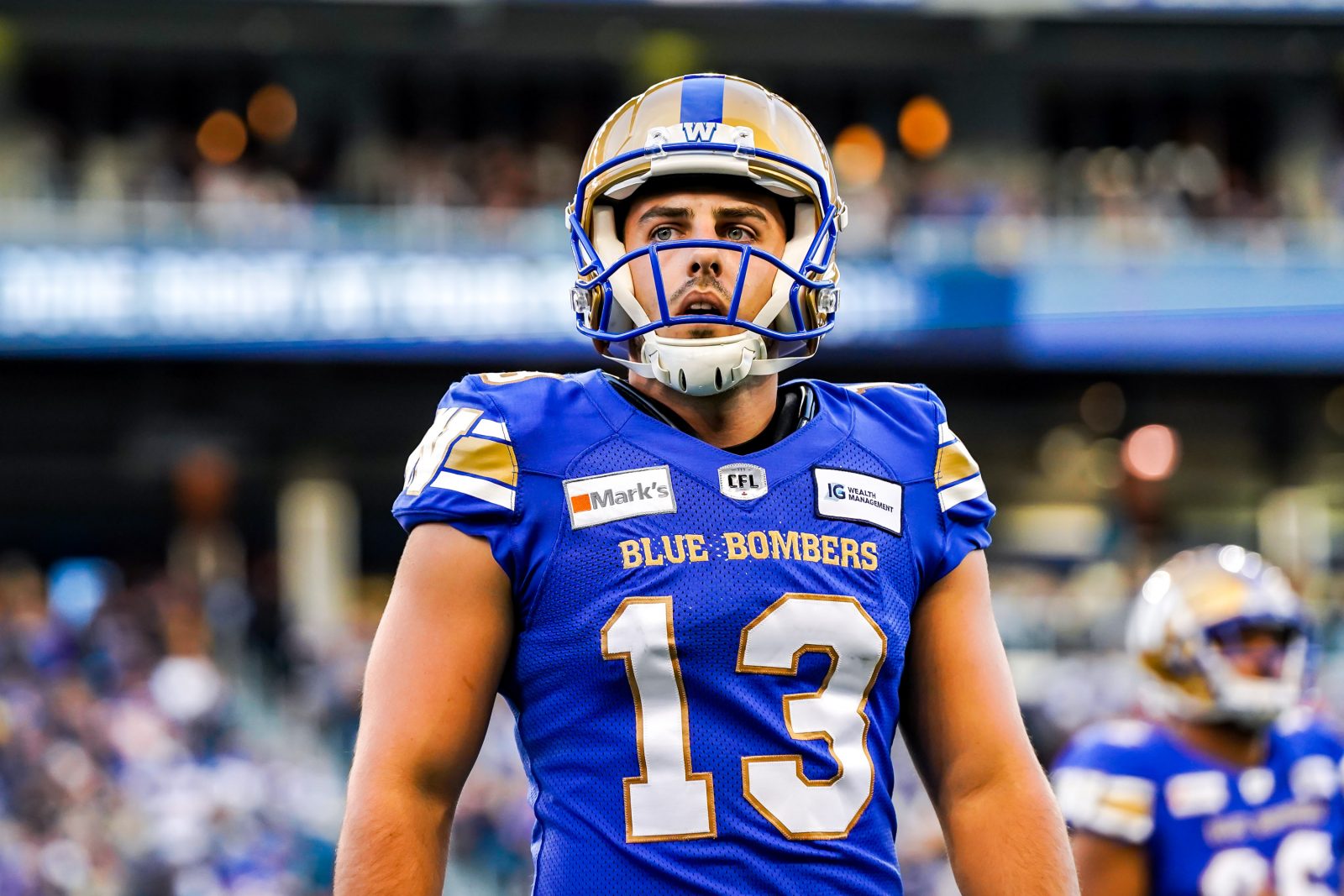 The winner, it’s worth noting, also came after his first attempt was blown dead by a time count violation, pushing him back 10 yards further.

“I took a peek at the play clock as I took my steps to the side (prior to the field goal attempt and was like, ‘We’re getting close here. I think we’re going to have to move back,” said Liegghio. “I had a feeling we were going to get a time count and that’s on me for not setting up as fast as I should have. I’m just glad we got that second chance and I put it through.”

Liegghio’s work came on a night when Harris returned to the lineup after missing the first games of the season with a calf injury. Making his first start of the 2021 season — and first since being named the 2019 Grey Cup MVP and Most Outstanding Canadian — Harris rushed for 72 yards and a TD on 15 carries and pulled in another two passes for five yards in the win.

“It felt great,” said Harris. “After the first series I got the jitters out of the way and it was just good to be out there. That was definitely a gutsy win on offence. I mean, we’ve still got a lot to work to do, but it was great to get a win in that kind of fashion.

“Just to get back on the field in general was amazing. To get the ball in your hands and still feel like you can do the things you’ve been doing is a great feeling. I’m proud of the game I put out there and I’m proud of my teammates for how they supported me throughout this whole thing.”

The Bombers offence did suffer through three-four drops that were both drive and momentum killers, but Zach Collaros – who finished 16 of 25 for 243 yards – did connect with Rasheed Bailey for critical 16 and 14-yard gains, both on second down, to help move the ball into range for Liegghio.

“Any time you can win in this league it’s sweet, but against a great team like that it’s awesome,” said Collaros. “I thought down the stretch there we made enough plays to win the game and Marc hit a huge kick for us. I love Marc. He’s a great dude, a great teammate. He’s just an Italian kid from Woodbridge (Ont). I love the kid. That’s awesome from him.” 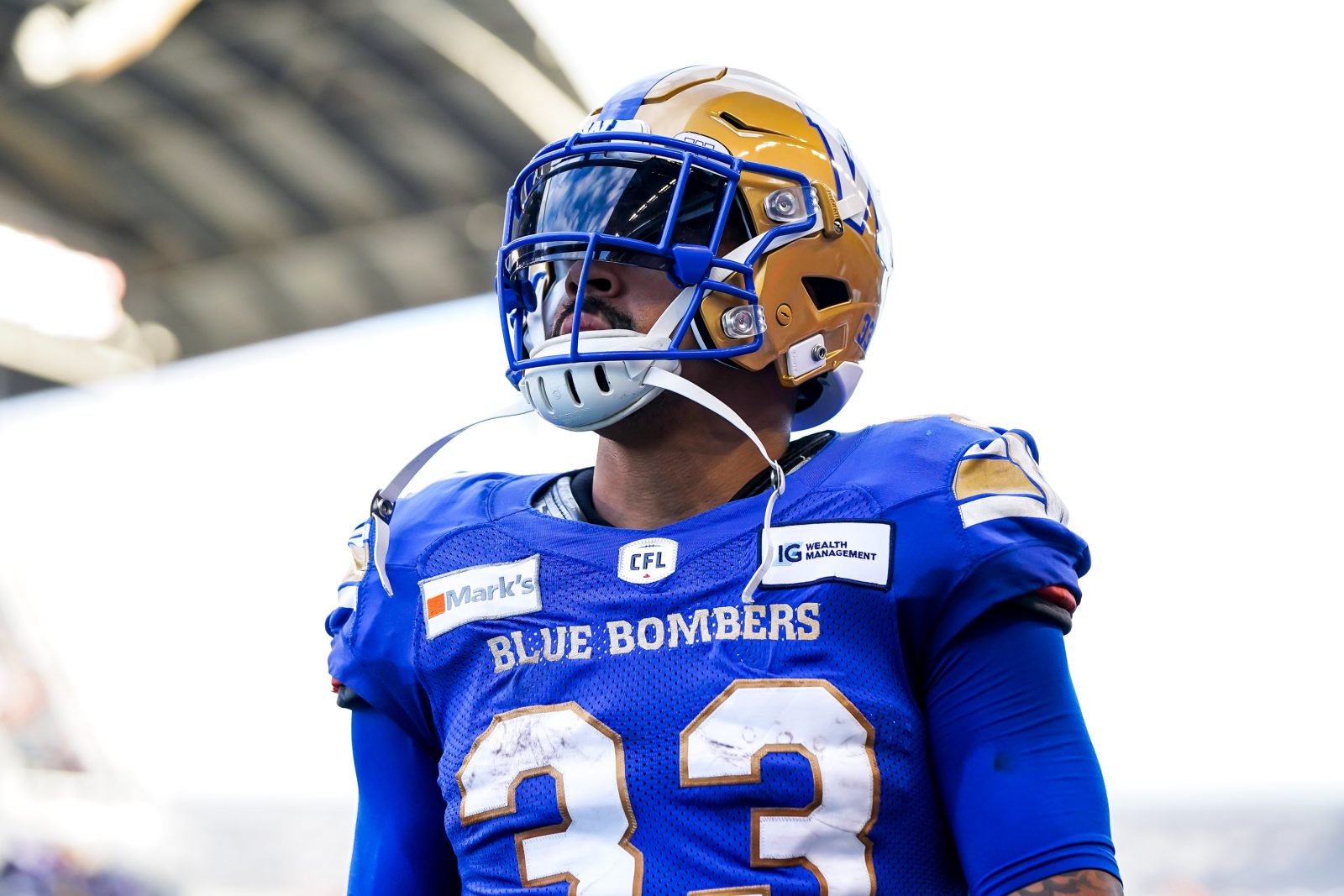 Points allowed by the Bombers in the second half. Trailing 13-9 at halftime, Winnipeg allowed just a 33-yard field goal by Rene Paredes in the fourth quarter in the final 30 minutes, rallying with nine points of their own for the win.

The Bombers inactive player for the fourth straight week was OL Geoff Gray… Defensively the Bombers started the game with Shayne Gauthier at LB alongside Adam Bighill and Jesse Briggs, although he did come off the field in some second-and-long situations in favour of Alden Darby… Mike Miller was saluted in the pre-game for becoming the CFL’s all-time leader in special-teams tackles last week in Toronto and added two more to that total to give him 194.

14-1: The Bombers are now 14-1 in their last 15 at IG Field.
17: Calgary QB Jake Maier connected on 17 straight before an incompletion on the first drive of second half. He finished the night 30 of 39 for 307 yards.
8: Tackles by Adam Bighill, to lead all players. He also recovered a fumble.
108: Receiving yards by Rasheed Bailey, including a 50-yard reception to set up the TD by Harris

NEXT: The Bombers are in Regina next Sunday for the annual Labour Day Classic, with a 5 p.m. kickoff.