Every player at Winnipeg Blue Bombers training camp has a ‘this is how it all started’ story to tell, each unique in their own details. Still, it’s the origins of this tale  – what with Ayo Oyelola’s introduction to the game coming while stumbling upon a YouTube video during University of Nottingham law lecture – that make it that much more distinctive than the others.

Oyelola, for those of you who haven’t yet been introduced, is one of the five Global players in Blue Bombers training camp. He’s a speedy linebacker who has shown a natural sideline-to-sideline range and assortment of other athletic gifts that has occasionally had observers checking their roster sheet for the details on #55 in blue. Here’s the thing: the 22-year-old product of East London, England has been playing the game for only four years, ever since that fateful day when he was inspired in his university class.

“It was toward the end of a contract law lecture and I was getting a bit bored so I went on YoutTube,” began Oyelola in a recent chat with bluebombers.com. “The algorithm, for some reason, took me to some highlights of Saquon Barkley (the New York Giants running back) so I watched that and thought, ‘I want to try that. That looks pretty cool.’

“I’ve always been into power training and speed training to get as big as I can and as fast as I can. I’ve been doing that since I was about 13 when me and my best friend used to jump over laundry baskets in the back garden.”

Oyelola had already been encouraged by some of his university colleagues to try out for the rugby or football squads – Nottingham has an American-rules football team – and after seeing the Barkley video he decided to take his shot. 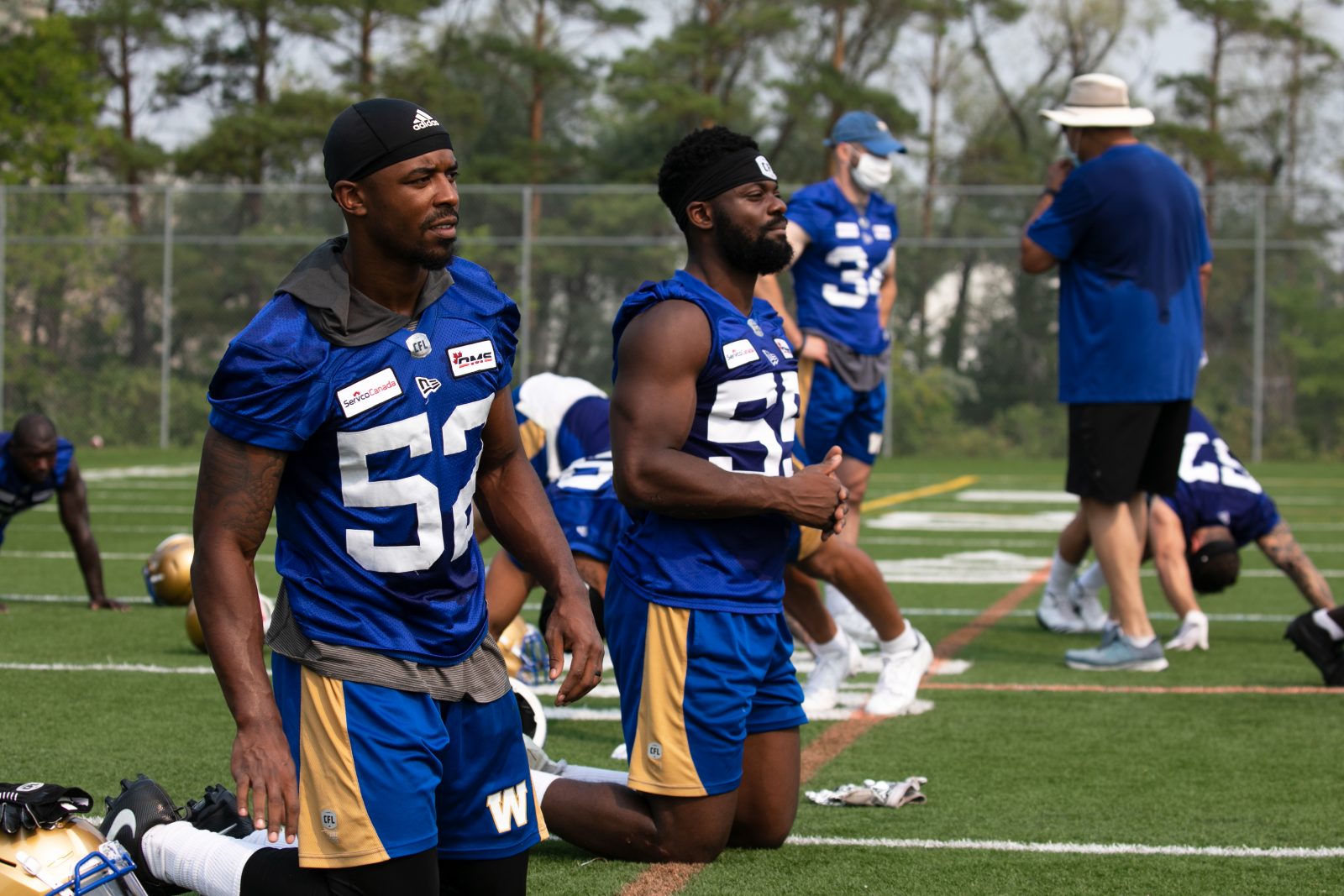 “I went down to training that very night,” he said. “I didn’t even knock on the coach’s door or anything, I just turned up at the training. And it turned out I was pretty good, so I just kept it going from there.”

‘Pretty good’, it would seem, is a bit of an understatement. Blue Bombers GM Kyle Walters said Oyelola’s game film from Nottingham was incredible, although it was difficult to gauge his abilities because of the overall skill level of the team and the league. That said, the Nottingham coaches got a sense that Oyelola might be something special almost instantly.

“I thought I wanted to be a running back or wide receiver at first,” he said. “We were doing kickoff and I ran down the field and was about 10 yards ahead of everybody and they said, ‘Who’s this guy?’

“A lot of people didn’t understand what was going on because I had played a high level of soccer my entire life, so starting a new sport seemed a little weird. But I just knew in my heart this was something I had to take on and try.

“I think people thought, ‘Oh, here he goes again changing things.’ But I never got offended. I understand why people were skeptical, but if I believe in something I’m going to do everything I can to achieve it. Looking back now, it might have been a bit delusional,” he added with a laugh. “But it seems like it’s worked out in the end.”

It turns out that Oyelola’s spark of football inspiration was his second crossroads decision in just over a two-year span. At 17, he had a contract offer from the soccer squad Ebbsfleet United in National League South. He opted instead to pursue his interest in law at the University of Nottingham.

“I always wanted to be a lawyer (both his parents studied law) but I dreamed of being a pro athlete because I love waking up and seeing the guys grinding and being part of a team. That’s my passion. I like law, I really do. But I’m 22 and your window for being a professional athlete is very short. As that passion grew I really became a full-time athlete, part-time student. I still got my law degree, but I began giving my everything to football. I’ve still got a long way to go, but I’m starting to see some rewards.”

The next chapter – Oyelola’s road from the football field in England to Winnipeg – is just as compelling as his introduction to the sport. The head office of NFL International is in London, England. James Cook, who works with the NFL’s International Player Pathway Program, saw Oyelola’s game film and recommended him. The timing was perfect because at that point Oyelola figured his opportunities in football were about to come to a screeching halt, as the pandemic ended an opportunity he had to continue playing in Germany.

Instead, he was worked out by the head of the NFL International Player Development Will Bryce after his exams, then performed well at a combine. Oyelola was then one of just 11 players from around the world selected to participate in the league’s innovative development program where players compete for four international practice roster spots in the NFL.

Oyelola picked up an injury at that camp in Florida and wasn’t at his best and didn’t earn one of those spots, but that didn’t stop the Bombers from grabbing him in the third round, 22nd overall, of the Canadian Football League’s Global Draft this past spring.

“I didn’t know where Winnipeg was,” he said with a laugh. “It’s incredibly wild when I think of it. Every day I wake up I think about how fortunate I am to be here.

“I love this game and the bigger field and speed of the game seem to fit my skillset. The way I look at now, I could be at a desk punching the clock. But I’m here playing the sport I love. I’m beyond blessed.”