Kyle Walters wants to keep the band together.

And the Winnipeg Blue Bombers have certainly earned it, what with their last performance in the 2019 Grey Cup providing some compelling evidence.

Still, the cold, hard reality of that ambitious goal is hitting the Bombers GM like a stinging right hook these days as he stares at a long list of prospective free agents and an edict to trim player spending costs.

Walters spoke for 30 minutes on Thursday about that and other free agent related subjects. Here are five takeaways from that chat:

It’s difficult enough in the CFL to repeat as Grey Cup champions – only the 1996-97 Toronto Argonauts and 2009-10 Montreal Alouettes have been able to do so since the end of Edmonton’s run of five straight titles in 1982.

Now try pulling that off with a reduced salary cap and every player in the league being away from the field since November of 2019.

First, here’s Walters on the financial challenge and the prospect of some players playing for less in ‘21: “Obviously those kinds of conversations are going to be difficult. A lot of businesses and a lot of people globally have had very difficult discussions and decisions and we’re no different.

“It’s no fun being in this spot, where we win the Grey Cup for the first time and we did a pretty good job of bringing the majority of those players back to try and make a repeat and didn’t get that opportunity. Now you’re looking at the list of free agents when you had hoped we’d be talking about back-to-back Grey Cups. And now it’s a bit demoralizing. It’s tough and demoralizing to look at the roster and all the names that led us to a Grey Cup and how difficult it’s going to be to keep the core together.”

The other component is simply Father Time impacting some players’ physical conditioning or even their desire to continue after a year lost.

“Everyone’s a year older,” said Walters. “When we talk to the young American guys coming up… some of those players you haven’t seen on the field in a year and a half.

“Now it’s everybody… all the veteran guys on our roster you haven’t seen in a year and a half. Some of the neg list guys that we signed that we maybe hadn’t seen for a couple of years, now it’s three years. So the year off and not being able to see these guys, it’s quite difficult to get an accurate assessment of the health of these players when you don’t see them. That’s a real difficult part of the evaluation process when you’re talking about your rookie American players, but now it’s across the board. One of the GMs said (free agency) is potentially buyer beware. You’re not going to know.”

Walters said players with offseason bonuses due will be approached first about restructuring or deferring. Once that is cleared up, he’ll have a better understanding of how to make the rest of the available cap space fit.

However this puzzle might fit together, it likely won’t come without almost everyone being affected.

“We’re looking at all the options and, believe me, none of them are great,” Walters said. “You’re going down scenarios where even a young player making a few thousand more than the minimum… do we ask him to take a cut to lose a few thousand dollars? We’re exploring all options.

“It’s a lot of time and energy and a lot of not-very-pleasant phone calls and discussions with agents. But you have to figure out a way to get to the assigned cap number that we’re working with.

“The magnitude of this is different, but the discussions are similar to most offseasons where you factor in the guys who are under contract for next year, you factor in some raises for the guys who deserve a raise and then you see where you’re at. Then there’s always a couple really difficult decisions to move on from or ask a guy to take a pay cut to fit it in. Now instead of a couple of those decisions we’re looking at six, seven, eight, nine of those decisions.

“It’s just the magnitude,” he added. “The decisions are similar to other years, it’s just the number of them is a bit overwhelming. If the reality of our world is our cap is reduced, then it’s impossible to keep everybody making the same amount. It’s not complicated math, so decisions have to be made.”

Andrew Harris is the three-time reigning CFL rushing champion. He’s also a pending free agent. The Bombers’ star running back remains a top priority for Walters & Co., but the restructuring of some contracts needs to be done before they can get down to really talking numbers with the Grey Cup’s MVP and Most Valuable Canadian.

“Our roster, we’ve got veteran guys who have been defensive players of the year (Willie Jefferson and Adam Bighill, both under contract) and Grey Cup MVP (Harris) and lineman of the year (Stanley Bryant, both pending free agents),” said Walters. “We’ve got some quality talent on our team and quality talent that are veterans that have earned their high paycheques. That’s just the way it is. Andrew Harris is one of those guys. There are a bunch of names on this list that have been very successful and have had good careers and have earned top dollar at their position. Andrew is in that category, but Andrew being a free agent… obviously he’s still top priority, but we need to address some other issues first to get a better idea of where we’re going to be with the cap.” 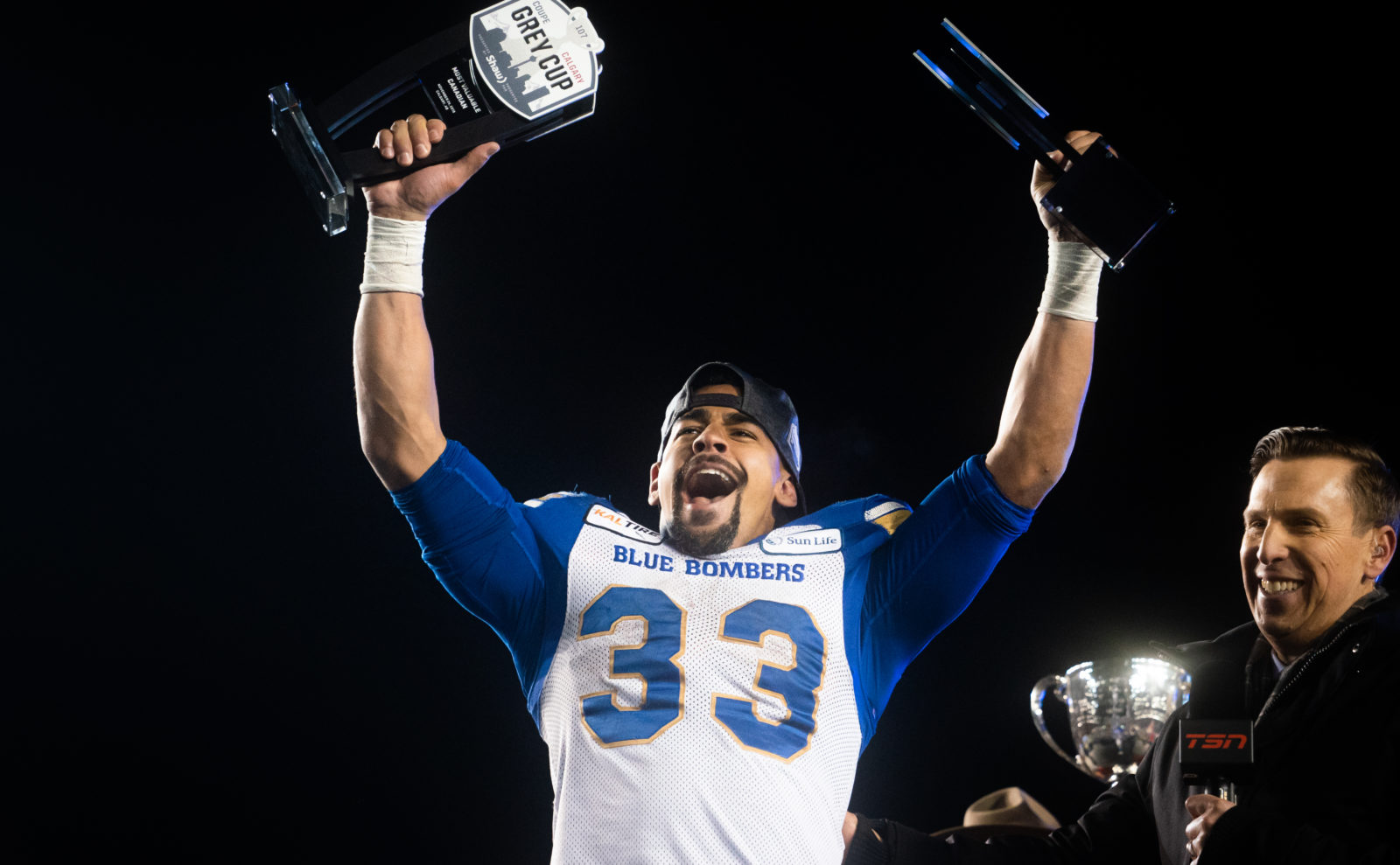 The Bombers added three key players on defence a year ago in defensive back Josh Johnson, linebacker Micah Awe and linebacker/end Tobi Antigha. Those signings were seen as critical, especially with Winston Rose and Marcus Sayles having inked NFL deals and Drake Nevis and Craig Roh moving to Toronto in free agency.

But only Awe remains under contract for 2021. So where does that leave Johnson and Antigha?

“It’s funny… you sign those guys to one-year deals and you never get a chance to see them,” said Walters. “It’s frustrating and disappointing for everybody and now they’re in the mix. They’re going to be free agents. They’re in the group where you take a deep breath and try to figure out the guys under contract first and how that looks and then we’ll focus on the free agent guys.

“It’s a fairly unique situation where we’re talking about guys who were free agent signings who were never in Winnipeg.”

The best kicker in Bombers history is a pending free agent. Justin Medlock is also 37.

“Justin always takes his time,” said Walters. “What I’ve learned with Justin is you just give him space in every offseason. They take a deep breath and enjoy their peace and family time.

“We’ll figure out what his plans are. Each offseason he tries to figure out if he wants to come back, if he wants to move on. Certainly him and his family have that discussion and eventually he’ll let us know.”

Walters has always been candid and a straight shooter since assuming the GM’s chair with the Bombers. And that proved true again when he was asked what he would say to fans about the work ahead to keep this championship team together.

“We’re doing our best. You look at your team and say, ‘Why did we win the Grey Cup?’ This is the way it is and how do we keep the core together and you try your very best to do that. But, again, it’s obviously a very, very different world.

“We’ve got a good core group of guys. Like every year there will be a transition to some younger guys at different positions. I fully expect us to put a very competitive team on the field like we have for the last few years and win football games and make a run at the cup.”