Just a guess here, but right about now offensive and defensive coordinators across the Canadian Football League are doing the mad-scientist thing to their playbooks. And special teams coordinators, too.

Earlier this week the league announced its 2022 rule changes as part of an effort to increase scoring and capitalize on the things that make the three-down game unique. The key changes will see the hashmarks moved closer together, kickoffs pushed back and all no-yards penalties – whether the ball bounces to the returner or is caught in the air – now covering 15 yards.

“I like the dynamics of all of it,” said Blue Bombers defensive end Willie Jefferson this week. “It makes the league more fun. It is a scoring league, a passing league. Fans like touchdowns. We like touchdowns – when it’s from our guys only. We want our boys to score. And we’ll still try to keep you out of our end zone as best we can and give our guys ample opportunities to get in the end zone.

“The fans want touchdowns, our guys will give them touchdowns. But we want them to come from our team only.”

Blue Bombers slotback Nic Demski offered an offensive take on the narrowing of the hashmarks, indicating the move could lead to a more balanced attack by offences on both sides of the field – just as the move was designed to do. 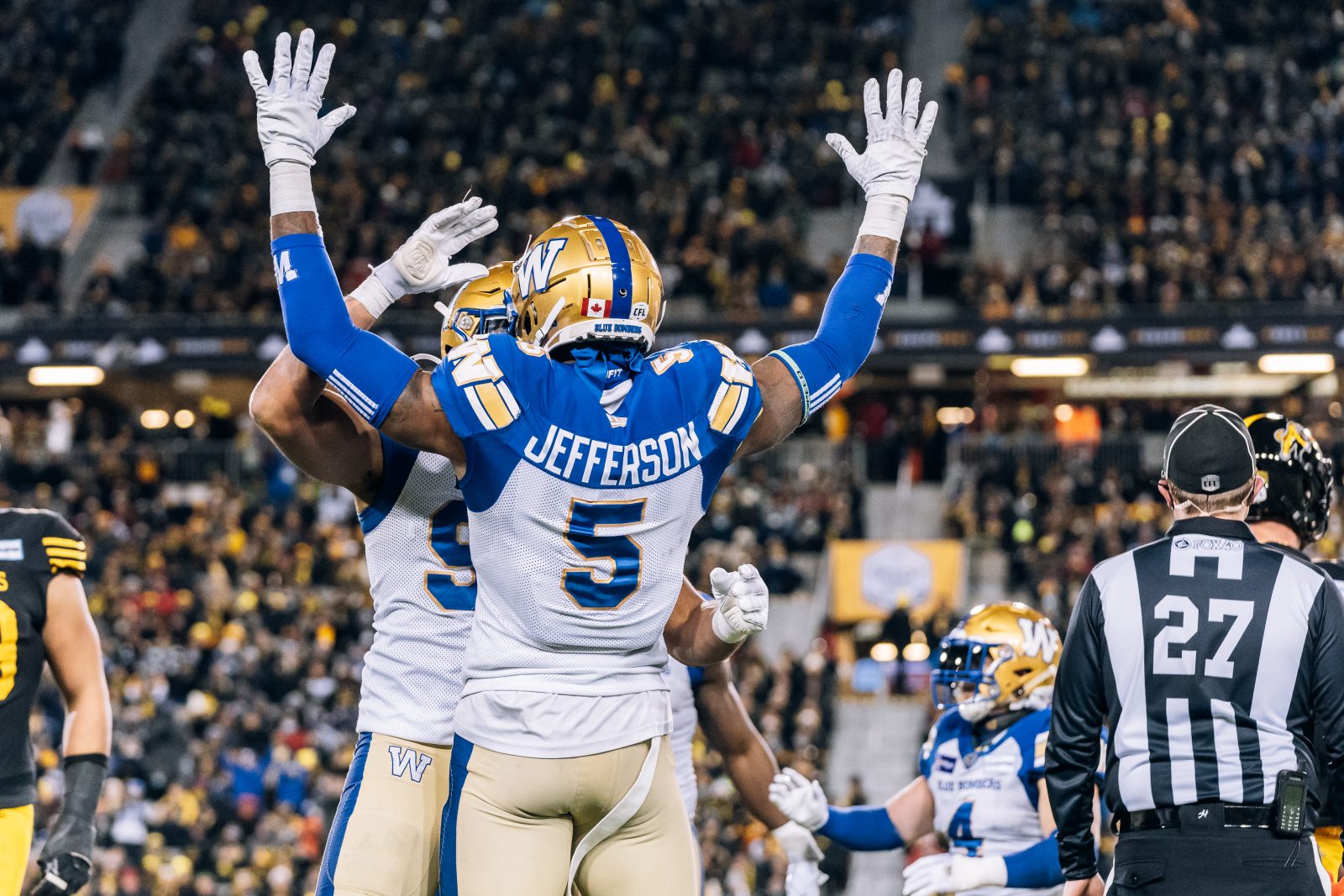 “What I think is going to see happen is you’re going to see a lot more three-receiver sets to the boundary side,” he said. “The throws to the field side are closer now, so there will be more concepts in attacking the two men to the field (halfback and corner), whereas in the past the only time you were throwing to the two-man field side was when you are throwing in-breaking routes because it was too far to throw out there. There’s going to be more opportunities for the field half and field corner to see a lot more action and a lot more noise out there.”

The Blue Bombers pride themselves on discovering defenders with versatility to play multiple positions, especially in the secondary. Brandon Alexander is an example of that, as he has taken snaps at almost all five positions in the defensive backfield. That approach will come in handy with the impact the hashmarks move will have on defence.

“It definitely puts a lot more pressure on the defence with the hashmarks being moved inside,” said Alexander. “There won’t be as much movement between the hashes and it could be that ‘strong side and weak side’ become obsolete and both sides will just have to know both sides.

“It levels the playing the field on both sides – offence and defence – on how far the throws are. It puts a lot of onus on the defence, for sure, and we’re going to have to make a lot of adjustments. You can’t really tell any more – as far as splits – where receivers are going to line up. At the end of the day, there’s nothing we can really do about rule changes. We’ll just keep playing football and find some way to manage that situation.” 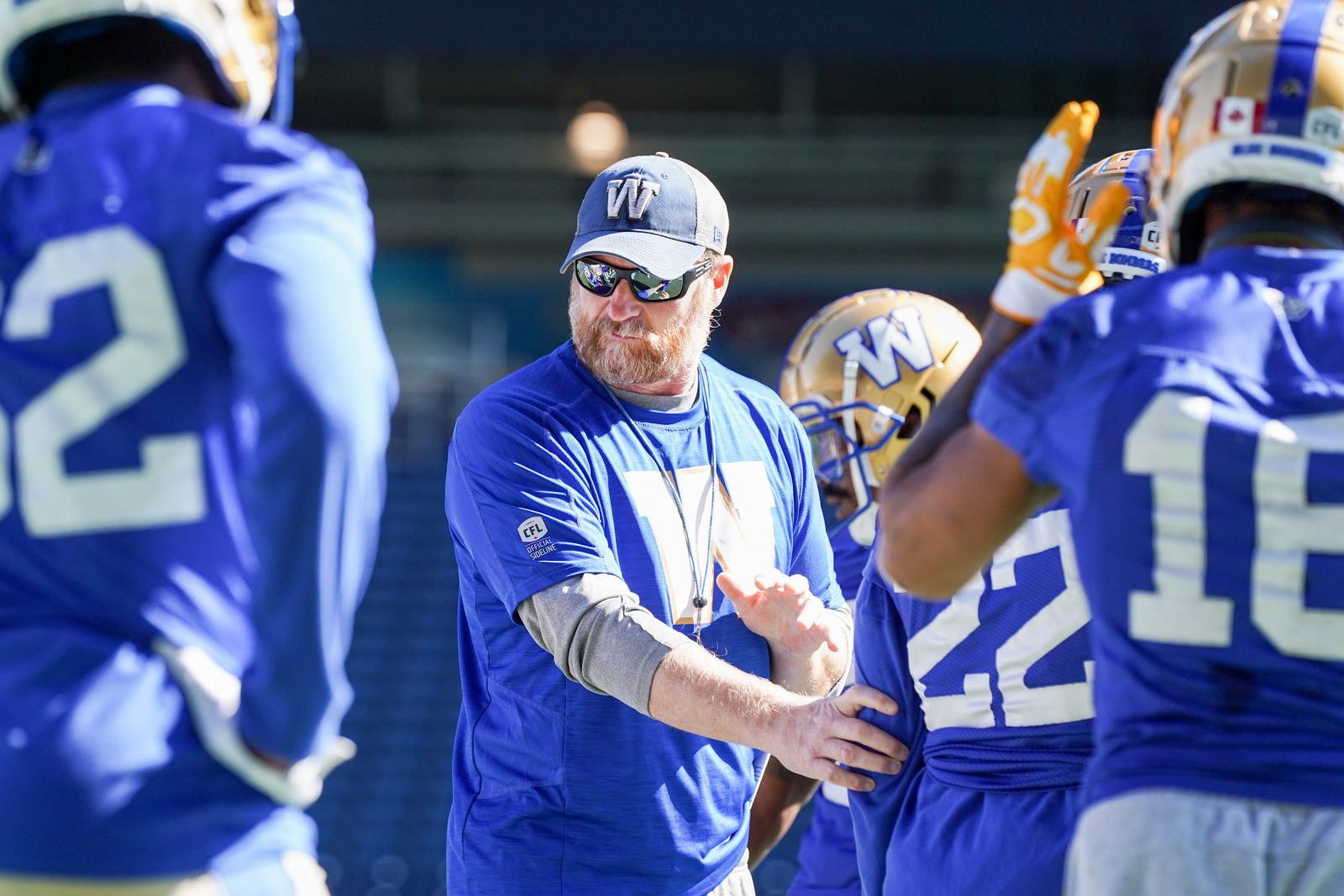 “Everything is going to be played around the same speed on both sides now. Everybody is going to know both sides in order to play this game. We would have done that already, but now it’s going to be even more important because the hashmarks are closer together.”

Blue Bombers head coach Mike O’Shea has been a part of the CFL’s rules committee for eons. And for all the vitriol there is about possible change to anything the CFL does, one of the endearing qualities of this league – or any league – is a willingness to consider and then implement change.

“With the rules committee, we look at rules every single year,” said O’Shea. “We look at what the trends are in the game and how the game is flowing. We take direction from the commissioner and the board as to what we need to look at. And if we see there’s an opportunity to make our game better and more exciting for the fans, then we’re going to investigate it thoroughly. And this was one of those things that comes up.

“Generally speaking, I don’t think you have to dig too deep on this. Over the last couple of decades, most rule changes are meant to increase the excitement of the game. Now to say that they’re geared towards increasing offence, well I think that’s what people find exciting. Nobody wants to watch 9-6, really. I mean, I like 9-6 games because I’m a defender. But for the most part, the CFL’s a wide-open scoring game. We don’t go in with the idea that we’re going to change rules for the offence. It just so happens that when you move hashes or do those things, you tend to generate more offence.

“But trust me, defensive coordinators will be on top of it. They’ll be scheming their own schemes to stop offences, no matter what we do.”

Just prior to the unveiling the fans in attendance were treated to ‘Road to the Grey Cup: Back-to-Back’ – the wonderful video put together by Riley Marra, the club’s Senior Manager, Digital Media.

It’s a must-watch for fans:

2. CFL training camps open on May 15th and one of the most-intriguing players to monitor during Blue Bombers sessions will be former 1K receiver Jalen Saunders, signed in mid-April to a two-year deal.

We’ve referred to it as a ‘low risk/high reward’ addition because Saunders hasn’t suited up for a game since blowing out his knee with the Hamilton Tiger-Cats in the 2018 Labour Day Classic against the Toronto Argonauts.

Saunders was released by the Ticats before camp in ’19 when it was determined his recovery would take longer than initially hoped but was good to go in 2020 in the XFL before that league ceased operations and was signed by the Ottawa RedBlacks before being in a near-fatal car accident that prior to training camp last year.

It’s certainly worth the Bombers taking a look at Saunders because if he’s still got game he bolsters a receiving corps that will include veteran Greg Ellingson, added in free agency, along with returning starters Nic Demski, Rasheed Bailey and Drew Wolitarsky following the departures of Kenny Lawler (Edmonton) and Darvin Adams (Ottawa).

GM Kyle Walters also said the club did their due diligence on Saunders’ knee and “Once Al (Couture, signed off, it was full speed ahead.
“When he was in the CFL a few years ago, he was a very dynamic, exciting player,” said Blue Bombers coach Mike O’Shea earlier this week.

“And I think he’ll bring that to the table, too. We go to training camp and we expect these guys to come in in shape, and I know he’ll do that. And we expect to learn more about them as we go along. So, what you’re getting is an evaluation of what he was like when he played in the CFL before, and he was a very exciting player with the ball in his hands. We expect to see that, too. And then when training camp comes around, we’ll get a better evaluation of that. But it’s exciting to have signed him. He was tough to play against the last time he was around.” 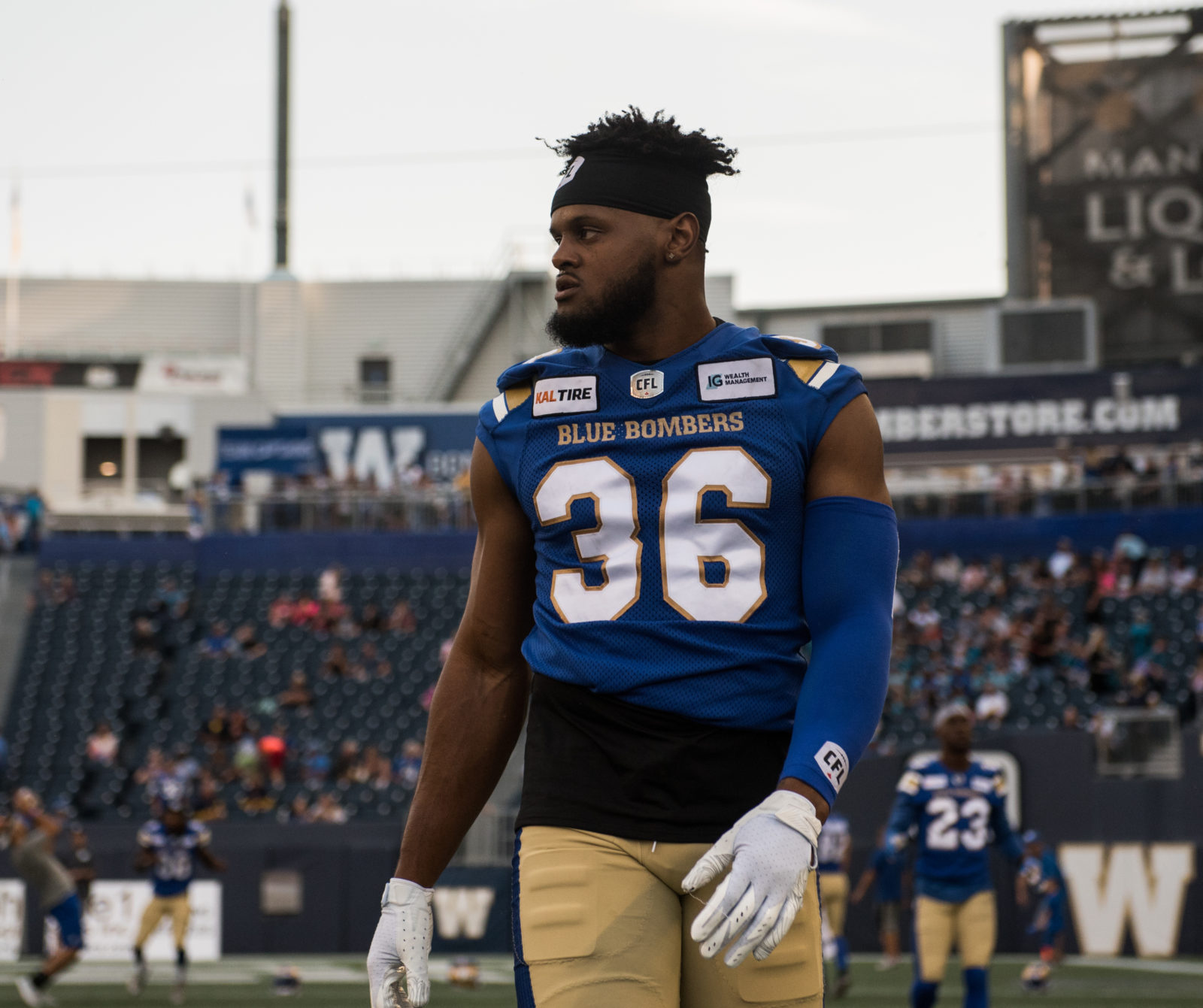 3. FYI: O’Shea said defensive back Mercy Maston – who was so important in the Grey Cup run in 2019 before injuring his Achilles in camp last year – will be ready to go when camp opens on May 15th.

“Mercy was close to being ready during the playoffs. He had unbelievable return. He was very diligent in how he worked, and Al Couture and his staff did a great job… and a lot of credit goes to the player and how hard they work through rehab. And he was very close to being able to return for playoffs.”

… The Blue Bombers added two more players on Friday, bringing their roster to 76 and will be adding more before camp. “We still have some filling out to do,” said GM Kyle Walters this week. “Ted (Goveia, Assistant GM/Director of Player Personnel and Danny (McManus, Assistant GM/Director of U.S. Scouting) are finishing off the free-agent camps down there. So just kind of circling back and filling out the training camp depth chart right now.”

4. Kicking update: It’s still likely the Blue Bombers will add another kicker for training camp, but O’Shea did throw his support behind the two kickers already on the roster in Marc Liegghio and Ali Mourtada.

“Leggs has been working his tail off, and so has Ali, and I know they’ll be better, and they will be competing for their spots,” said O’Shea. “I don’t think we’re closed yet on the idea of whether or not we’re bringing anybody else.

“I’m very confident in those two guys. They’ll come in and certainly show better than they did last year. We talked about it already in previous (media) conference call, that anytime a guy is in his second year, it’s just remarkable the difference for them when they show up, how much more comfortable they are. In anybody’s second season, really. And that’s pretty easy to say, first-hand, with these guys. They’re going to come in and be better and compete very well through training camp. We’ll see where it goes from there, but I would say we’re probably not done in adding a kicker or player for training camp. But I’m also confident in the two guys we have on the roster.”

5. The CFL announced Friday the nine participants for the Women in Football Program that will see each of the nine teams welcome one woman to join their football operations or business administration department for a month at the start of training camp.
The full press release from the CFL can be found here.

The Blue Bombers will be joined by Taylor MacIntyre, who will work with the coaching staff. She is the receivers coach at McMaster University and with Football Ontario.

6. And, finally, sorry to hear of the passing this week of Quency Williams, a defensive end with the team from 1989-92 and a member of the 1990 Grey Cup championship side. He passed away suddenly at the age of 61. One of the first to reply to the initial tweet of the news was Hall of Famer and Blue Bombers legend Chris Walby.

RIP Q-Dog.. one of the toughest SOB’s I ever played with.. a Great Teammate who was taken too soon. 🙏 Prayers and condolences to his family..