Kyle Walters is on the line and – in what seems to be the pattern these days – our conversation opens with a discussion about case counts, variants, vaccine rollouts and all the pandemic-related topics that are impacting the Canadian Football League.

And then the subject of Zoom calls comes up, a notion of which so many of us had no clue would become so routine about 14 months ago.

“It sounds crazy, but the virtual interviews with draft prospects can be so draining,” the Winnipeg Blue Bombers GM explained Friday in a chat with bluebombers.com. “We were on for six-seven hours the other day and by the end of the night it feels like your eyeballs are going to pop out.

“That’s all it is now…. I’m at the stadium every couple of weeks to get my computer updated with film, but so much of what I’m doing can be done at my home office now. it’s changed our world.”

Walters, along with head coach Mike O’Shea and Assistant GM/Director of Player Personnel Ted Goveia are prepping these days for both next week’s Canadian Football League Global Draft and the Canadian Draft, which is scheduled for May 4th.

It can be both an exhaustive and rewarding process under normal times, but with everything being done virtually now – the testing, interviews, etc. – some of what makes it an enjoyable time of year for personnel types and coaches is lost.

“One of my favourite weeks of the year is before we go do all the combine when we meet as a staff,” said Walters. “I’ve done all my (film) cut-ups and graded players. Ted and Mike have watched the cut-ups and graded them. And then we lock ourselves in my office for three-four days and just discuss every single grade. When there’s a difference between a first-round grade and a fifth, for example, we put the film on again and hash it out.

“It’s just not the same now. It’s not the same, enjoyable experience. And then going to the Combine is probably my favourite after going through these meetings with Ted and Mike. Getting to see these kids in person and talk and to evaluate them is what I missed the most.”

Clearly, it won’t be the same for the draft prospects, either. A player from Manitoba or McMaster, for example, doesn’t get to line up against a Canadian who played at Michigan. As a result, there likely won’t be the usual post-combine draft board changes as we’ve seen in years past.

“Look at (current Bomber) Nick Hallett as an example,” said Walters of the club’s 7th-round pick in 2019. “He was injured and not 100 percent (in his draft year) and we didn’t pay too much attention to him on film. Then you see him at the combine and it’s ‘Who the hell is this kid? Wow. Let’s circle back.’ Those are the kids that are in trouble this year.

“If Nick Hallett was in this draft class I’d be worried that he wouldn’t get the same shake he did back then. We wouldn’t have been able to see him in person and say, ‘Who’s this pit bull running around?’ He made us put an asterisk by his name and go back and watch his film from two years ago.”

FYI, Walters and yours truly spoke extensively on Friday for stories that will appear on bluebombers.com leading up to the Global Draft and the CFL Draft. 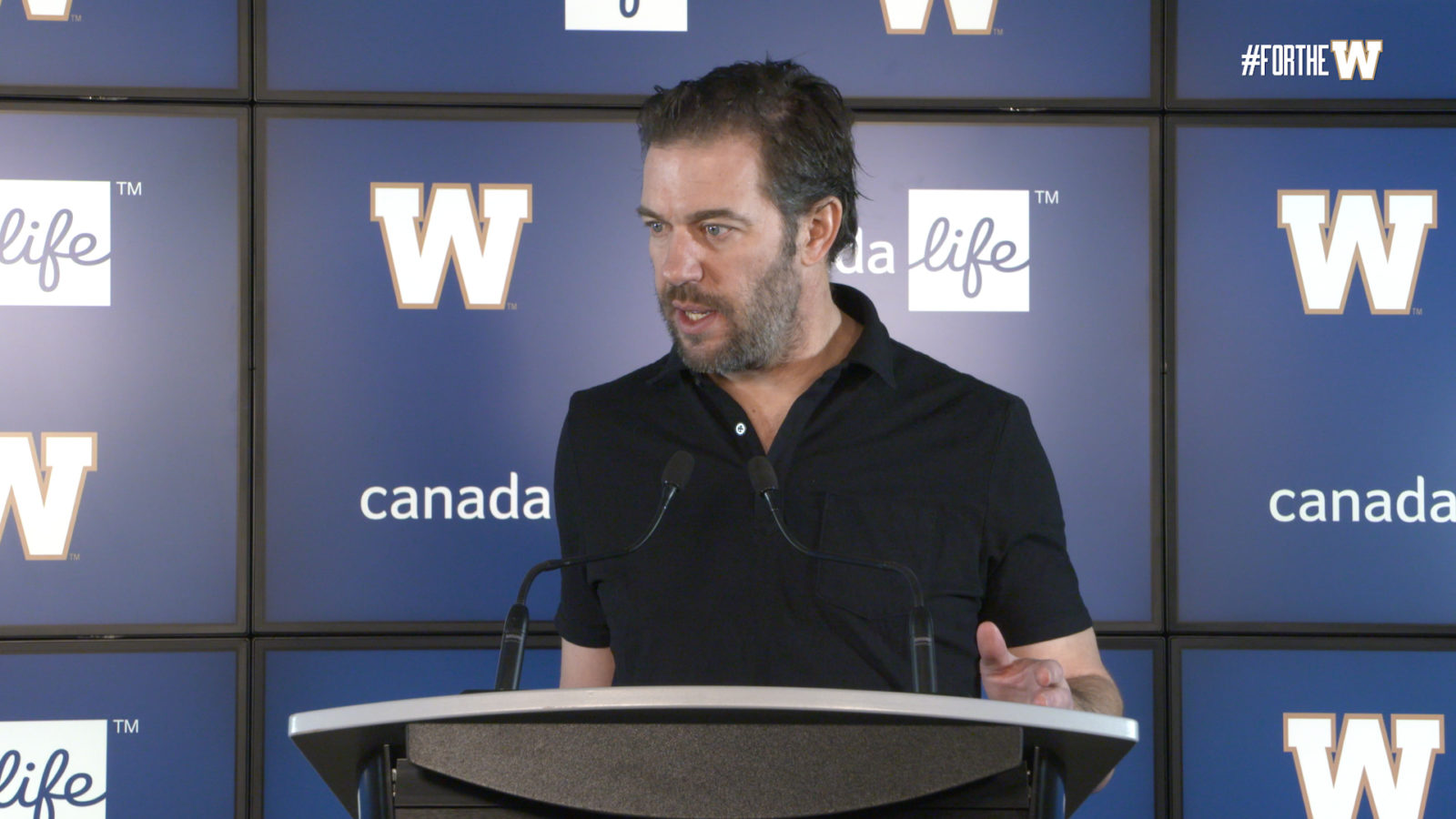 1. The current uncertainty around the CFL, both with the mystery about a 2021 start date and the discussions with the XFL, has caused a lot of strain across the league.

“You really feel more for the players,” he said. “From our standpoint we’re working on the Global Draft and the Canadian Draft and keeping very busy watching film and these Zoom calls with everybody. That’s a massive undertaking trying to get that organized logistically. But there’s a sense of normalcy from that end of things – as best as there can be. This whole process has been a big challenge, but at least it’s giving us something to work through.

“We’re able to focus on some short-term tasks where the players are so used to training their bodies… they’re high-end athletes without a certain date to peak their bodies at. That’s an adjustment for them.”

2. Further to the above, Walters said coaches and football staff are doing their best to answer any questions and deal with the concerns the players have about when a 2021 season might start.

Still, that’s not a question that can be answered yet given the ongoing discussions with provincial governments, health authorities and the nine CFL teams about a potential date.

“(The league) updated the GMs and head coaches last week on a call about some of the protocols that might be put into place down the road. But there was no specific date given,” said Walters. “The league office and team presidents are the ones trying to sort through all that stuff.

“All the football guys just said, ‘Let us know as soon as you get information.’ We’re operating like we’re ready to roll. Just give us a date and a time. Everybody is just chomping at the bit to get going.

“The coaches doing are doing all their contact points with players in trying to keep them engaged. But there’s not a lot to tell them other than try to be positive and stay focussed on the season and as soon as we hear something we’ll make sure everybody knows.

“It’s tough. We just tell them to keep training as if it’s still a May 10th start date for camp until told otherwise.”

3. One more on all this, courtesy Dave Naylor and Farhan Lalji of TSN.

4. Meanwhile, the CFL and XFL-in-discussions story has the rumour mill spinning at a zillion RPMs. There has been some good, healthy and passionate narratives about all that, but also some hot takes that are, well, out there.

Now, while I might not always agree with TSN’s Naylor – we’ve both been covering this league since the 1990s – I do respect how he does his homework and how he is plugged in with people around the league.

His latest column, FYI, is here.

This interview with CFL commissioner Randy Ambrosie is also worth watching, courtesy CFL.ca:

5. Bombers fans don’t need to be reminded that the 2000s, the first decade of the new millennium, weren’t kind years for the club. In fact, in the long and storied history of the franchise there have been only two decades in which the Bombers did not win at least one Grey Cup championship – the 1970s and the 2000s.

In the 1970s the Bombers never won a single playoff game. But in the 2000s the club appeared in two championships – 2001 and 2007 – and lost both. As well, the team played in four division championship games.

The ‘01 squad remains one of the most-talented Bomber teams in history, but fell to an 8-10 Calgary Stampeders team in the Grey Cup. And the ’07 team lost Kevin Glenn to a broken arm in the East Division Final win over Toronto, meaning rookie Ryan Dinwiddie made his first career pro start in the Grey Cup loss to Saskatchewan.

Anyway, this is a long-winded way to say if you want to relive some of the misery of the decade, the CFL’s Grey Cup portal now includes games from the 2000s.

6. Good story here on Bombers assistant coach Kevin Bourgoin from The Rutland Herald in Vermont and how he and his family have made Winnipeg their home:

7. FYI: Former Bomber head coach Mike Riley – one of the finest gentlemen ever to walk a football sideline – is the new head coach of the Spring League’s Sea Lions… Not sure how this affects Chris Streveler in Arizona, but the Cardinals have recently signed veteran QB Colt McCoy. Read more about that here.

8. Bombers Senior Director of Player and Public Relations Relations/Chief Consigliere Darren Cameron and I sat down this week for our latest ‘Handled Internally’ podcast with our guest Drew Wolitarsky.

There’s a lot of ‘dudes’ and ‘bros’ in this and if you love listening to Wolitarsky tell stories as much as we do, it’s definitely worth a listen.

The podcasts, FYI, are available on all your favourite streaming services.

Quick snippet from Wolitarsky, who is now recording and playing music after first picking up the guitar just three years ago. His old landlord was moving out and gave him the chance to pick whatever he wanted from her stuff.

“I’m like, ‘Cool’, because I love a yard sale, bro,” Wolitarsky explained. “I go downstairs and she has this beat-up Yamaha. You know when strings get really rusty and they turn green almost? Like nasty green? That’s the guitar. So, I’m like, ‘I’m taking this thing for sure.’ A couple tetanus shots later I learned to play four chords. I always think personally the best way to learn is to learn a song you like (his first was ‘Father and Son’, by Cat Stevens). That motivates me more. I’ve always sung, just for fun.

“I’m a writer by nature, man. I went to school for that and have been doing that since high school. It’s the way I understand the world. The music and that just came together, that’s the two components of song-writing. I’ve always like Bob Dylan and (Jim) Croce and Cat Stevens… those singer-song writers who just tell a story, bro, who tell the truth.”

9. Wolitarsky, FYI, will be playing a full live-stream set from The Burton Cummings Theatre on April 20th. The details can be found here on his IG page:

10. And, finally… man, oh man how I’ve missed this kind of good-natured banter between fans and teams. Can we please get back to this soon?