It began as a casual chat with the check-in question that seems to precede so many conversations these days:

How are you managing in these crazy, COVID times?

And by the conclusion of 20-minute visit with Winnipeg Blue Bombers defensive back Nick Taylor, we had touched on everything from his good fortune in 2019 – landing in Manitoba after being cut by Edmonton and then winning a championship – to his itching desire to get back to work and our mutual love for basketball and the National Basketball Association.

We’ll get to the hoops in a bit, but let’s open with some thoughts from Taylor on the cancellation of the 2020 Canadian Football League season and how that has derailed – temporarily – the good thing he and the Bombers defence had going late last year.

“It’s been weird,” began Taylor from his home in Miami. “There were all the reports that the season might happen, then it might not happen… but at the end of the day we always thought it was going to get done and we were going to have some kind of season. Somehow it was going to happen and so I was preparing for it.

“For it not to happen, well, it kinda sucks. But at the end of the day you’ve still got to keep your body in shape, even if it’s just for COVID purposes and trying to be a healthy person. I was ready and prepared to get back, so that part is brutal. I really feel like I’m at the point in my career where I understand the game. It took a little awhile for me to get to that point where I can make plays and find a home.” 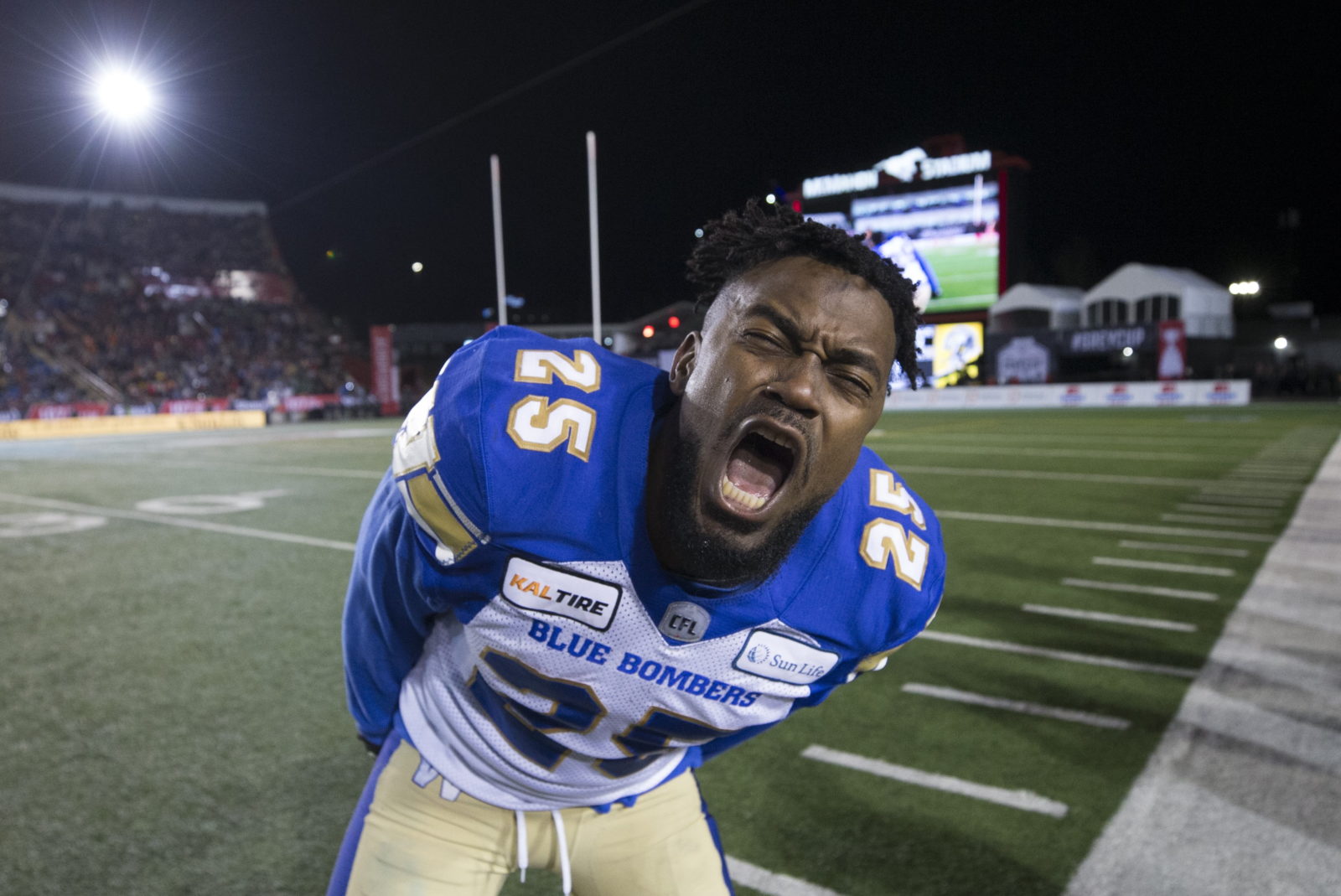 Just to rewind, the 32-year-old Taylor began 2019 with the Edmonton Football Team but was released three games into the year. The Bombers, facing some injuries in the secondary, scooped up the veteran in mid-August. He started the final four games and the playoffs – including the Grey Cup.

“Coming into this year I really felt we were going to have an amazing year,” said Taylor. “We don’t know how they were going to do it with Winston (Rose) and (Marcus) Sayles gone and whether they were going to move Mike Jones or me over there. But we had a nice group and we were really just starting to scratch the surface of having something special for Winnipeg.

“It turned out to be amazing. We got the ultimate prize and I got to work with a great group of people, Coach O’Shea… everybody in that building is amazing. It turned out for the best.

“I’m looking at it like I can’t wait to get back to Winnipeg. I’m going to be there two weeks early before we even have to report just to get back to the facility and get acquainted with everybody. Remember, I was only there for 2-2 ½ months, so I don’t know everybody yet.”

More on Taylor and other Bombers/CFL-related topics in our weekly collection of notes, quotes and links we call 1st & 10… 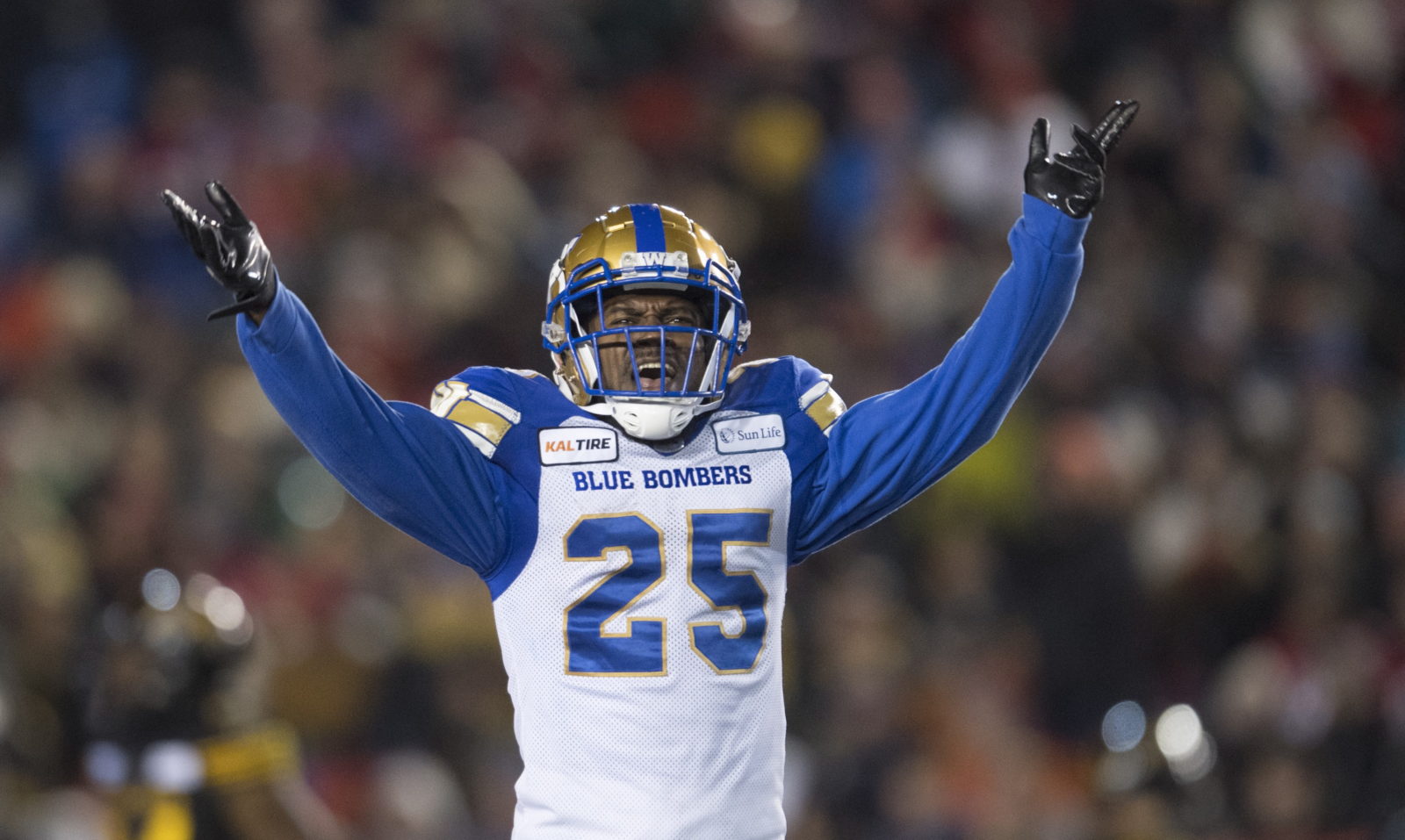 1. Taylor’s road to the Bombers is one of the most unique in the CFL. He didn’t play a down of college football – instead he was a guard on the Florida International University basketball team – but still managed to land a tryout with the Minnesota Vikings. Taylor had played both sports as a kid, but gave up football after Grade 10 to concentrate on basketball. In his senior season at FIU – where he was coached by hall of famer Isiah Thomas – he decided to again pursue football.

And here’s where his story gets wacky…

Taylor approached the FIU football coaches in his senior year about playing and was rebuffed.

“They asked me for film,” began Taylor with a chuckle from his home in Miami, Fla. “It’s not like it is these days where kids have all their games on film. And I hadn’t played since Grade 10.”

Unable to get a look from FIU, Taylor turned to the Stars Football League, a four-team loop that lasted from 2011-13. Taylor played for the Fort Lauderdale Barracudas.

“I came off the bench for the first game because in the first quarter one of our DBs got bombed a couple of times with deep balls,” Taylor recalled. “They put me in and I had two interceptions real quick and dropped another one. The defensive coordinator was a strength and conditioning coach. He took me under his wing and for the next two months I went and trained with him.”

That winter Taylor attended the FIU pro day and….

“I just annihilated everyone,” said Taylor. “They all came for T.Y. Hilton (Indianapolis Colts) because he was the man at the time. I ran a better time than him in the 40… he ran a 4.34, I ran a 4.33. He ran a 4.28, I ran a 4.27. And then a whole bunch of teams started calling me and were asking ‘What’s your story?’ After that I signed with the Vikings and it seems like I’ve been everywhere since then.” 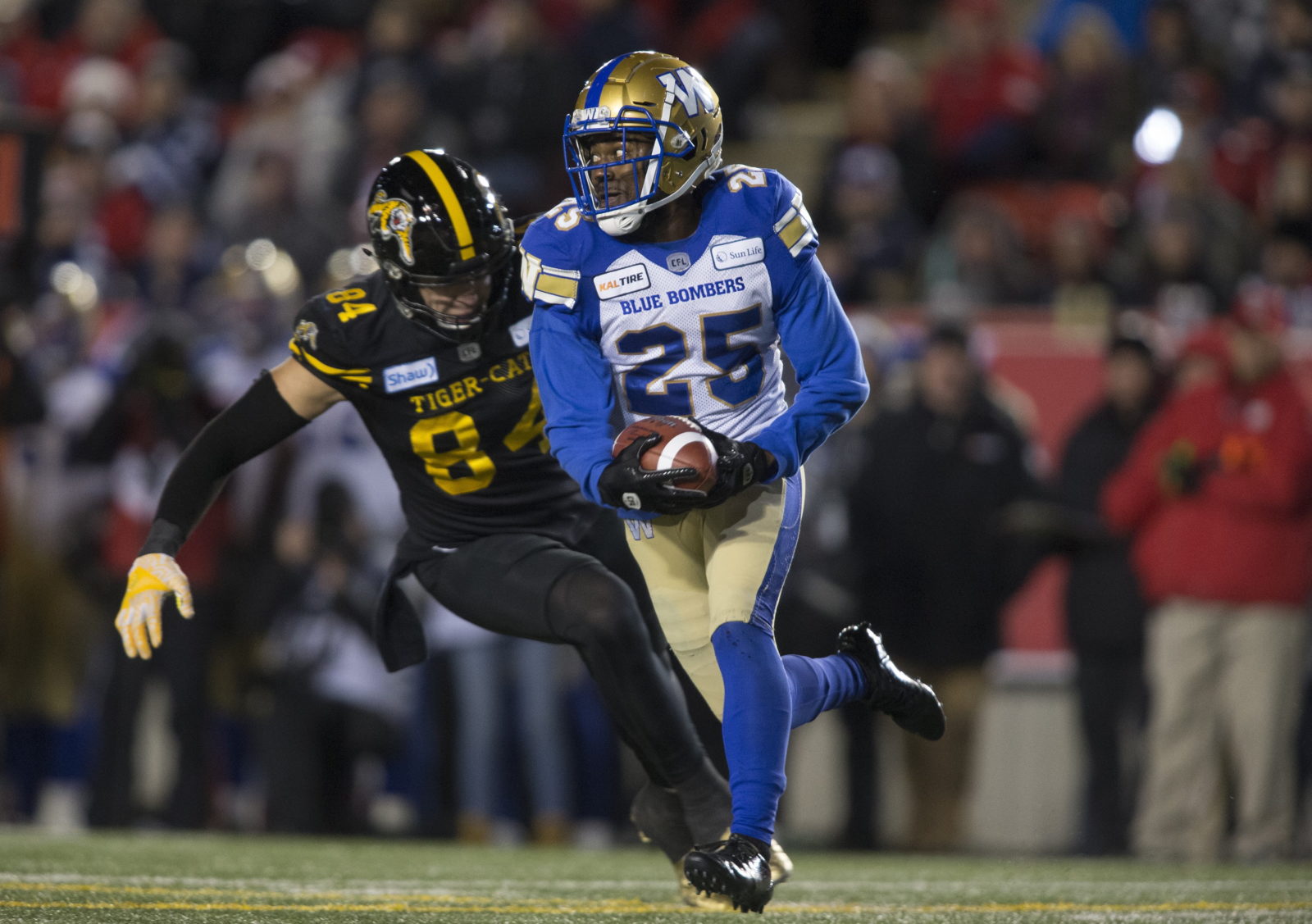 After a stint with the Orlando Predators of the Arena Football League, Taylor came north to the Ottawa RedBlacks in 2016-17 before joining Edmonton and then the Bombers.

Just FYI, he also won the national NBA 2K championship, where captured the top prize of $25,000 at a tournament in Las Vegas.

“And it all started because I went to that pro day,” said Taylor. “It’s all so crazy. I knew what I could do going into that pro day. I knew I would post a good 40 time and my bench press would be around 15 reps. But I didn’t know it would be that crazy with teams calling.”

2. Isiah Thomas is no longer coaching at FIU, by the way, and is now in broadcasting. But Taylor and Thomas did come across each other this winter.
“Isaiah was a fun, great coach,” said Taylor. “When he came in, he came in late so he didn’t get all the recruits he wanted. He was amazing. Real laid back and a cool, cool guy.

“I actually ran into him after we got back from the Grey Cup. I played in a celebrity basketball game and he was the opposing coach. He was running doubles and traps on me to mess around with me. He gave me his number afterward and said to holler at him if there’s anything I ever need. He’s always been good to me.”

One more hoops-related item from Taylor… he’s a Miami Heat fan and hasn’t missed a second of their run this summer in the NBA playoffs.

“That’s my favourite sport to watch,” he said. “I don’t watch the NFL too much. But basketball… I’m a diehard Heat fan. So, right now I’ll go crazy in the house and throw around furniture. I yell the whole night. It can get real crazy at my place.”

3. One more from Taylor… like a lot of CFL players he’s felt a bit out of sorts without the routine of training, practices or games every day.

4. Like a lot of fans, yours truly would like to see some sort of indication from the CFL as to what 2021 might look like. There is a ton of planning going on from the league and team level, it’s just there are too many unanswered questions right now for league executives to stand in front of the fan bases and media and say anything.

And so we wait. In the meantime, a solid piece from TSN’s Dave Naylor on some key CFL questions.

5. This past Thursday CFL teams unveiled 10 names from their 45-player negotiation list. Danny McManus, the Bombers Assistant GM/Director of U.S. Scouting provided a good snapshot of the club’s prospects here.

And any time that list includes a QB from the storied Notre Dame Fighting Irish – hello, Ian Book – well, he’s certainly going to have a lot of eyeballs on him. Book was on the cover of Sports Illustrated. Notre Dame’s game against Wake Forest this weekend has been postponed, by the way, after the Irish announced 13 players are in isolation. Seven players test positive for the Coronavirus on Monday.

In the meantime, to read more about Book and his skillset, check out this piece.

6. This week’s Chris Streveler link is the latest ‘The Waggle’ podcast with Donnovan Bennett.

What would you say to the fans cheering for you in the NFL?

“Just thank you,” said Streveler. “And I hope that you guys know and everyone who has been involved with the CFL know how much I appreciate my time up there. I wouldn’t have gotten the same opportunities down here without my time up there. I wouldn’t be the same person, I wouldn’t be the same player without all that stuff. Those two years completely changed my mindset, changed the way I approach the game… it just made me a professional.

“The fan support is so cool to see and I hope everybody knows how much that means to me…. I’m even more appreciative of the CFL and the person and the player it’s made me today.”

7. Nobody asked, but I’ll chime in with this anyway… best player I’ve ever seen in my time as a CFL fan or writing about it for the last 30 years is, hands down, Doug Flutie.

Saw this on social media this week and had to include the link to ‘A Football Life – Doug Flutie’ from 2018 because it does mention his time in the CFL rather than gloss over it or ignore it entirely.

8. Good read here on former Bombers DT Bryant Turner, Jr., who was one of the truly good guys in the locker room during some tough times in Winnipeg from 2011-15. And, just because, here’s a link from our site from when he officially retired from the Bombers in 2018.

9. It’s not easy for the CFL to stay relevant these days with the league going dark after the cancellation of the season, so kudos to the gang at ‘The Rod Pederson Show’ for keeping our league in the conversation.

Among Pedersen’s guests on Friday was Bombers defensive end Willie Jefferson. Near the end of the segment Pedersen asked Jefferson if he had a turn with the Grey Cup yet.

“I’d put some nice Texas beer in it for a little bit and just let it enjoy itself out here in Texas. This would have been the perfect time.”

10. Darren Cameron and I spent part of Friday afternoon recording the next edition of our ‘Handled Internally’ podcast with the legendary Bob Irving, who has been calling Bombers games seemingly since the days of leather helmets (1974, actually).

Bob and I have been friends for years and one of his many qualities as a person is real appreciation for every day. He’s seldom in a sour mood and rolls with the punches as well as anyone on the planet. We asked him during the podcast if health issues – he had the first of two open-heart surgeries when he was 18 – has played a part in shaping that outlook at all.

“It changed for me, for sure, 20 years ago when I had my second open-heart surgery. I was 50 years old and had my first when I was 18,” he said. “When I had it at 50, and I think I’ve always been the same person, it does change your perspective.

“Cal Murphy said that. He had a heart transplant, which is way more serious than what I had. But it changes your perspective on life, it really does. I’ve had issues ever since, really. I’m just thankful for every day. Health problems can change the way you view the world. You don’t get as upset about things. Whatever is going on is just not a big deal. Don’t sweat the small stuff. You do a lot more of that when you’ve gone through some challenges.”

Stay tuned for that episode soon.