His story has been anything but predictable or straightforward. And it’s certainly featured more valleys than peaks, more heartache than joy.

Still, Rasheed Bailey is an eternal optimist and this is the chapter he wanted to write next – the one where he established himself as not just a regular in the Winnipeg Blue Bombers receiving corps, but as a legit Canadian Football League threat.

So while the pause button is still pressed on the CFL right now – and another week has passed as the black cloud hovering overhead becomes more and more ominous – consider how all this is affecting the Philadelphia product.

Cut by the Philadelphia Eagles, B.C. Lions, Jacksonville Jaguars, San Diego Chargers, Cleveland Browns and Carolina Panthers before he appeared on the Bombers’ radar at a free-agent camp in Florida last spring, Bailey toiled on the club’s practice roster for most of last summer before earning his first start in the Banjo Bowl.

By year’s end he had started four regular season games – plus all three in the playoffs – in what was a tribute to his perseverance and his work ethic.

And now a full stop on all that momentum.

“It’s been hard for me because I felt like I was just catching that wave,” began Bailey in a conversation with bluebombers.com on Friday. “I’m still training like this is my year. But I hit 27 this week and once you hit a certain age you start thinking about your future and what’s next.

“It becomes very challenging. And, to say the least, lately I’ve been getting a little frustrated. I just want to know what’s going to happen because it’s hard to train and keep that same energy when you don’t know.” 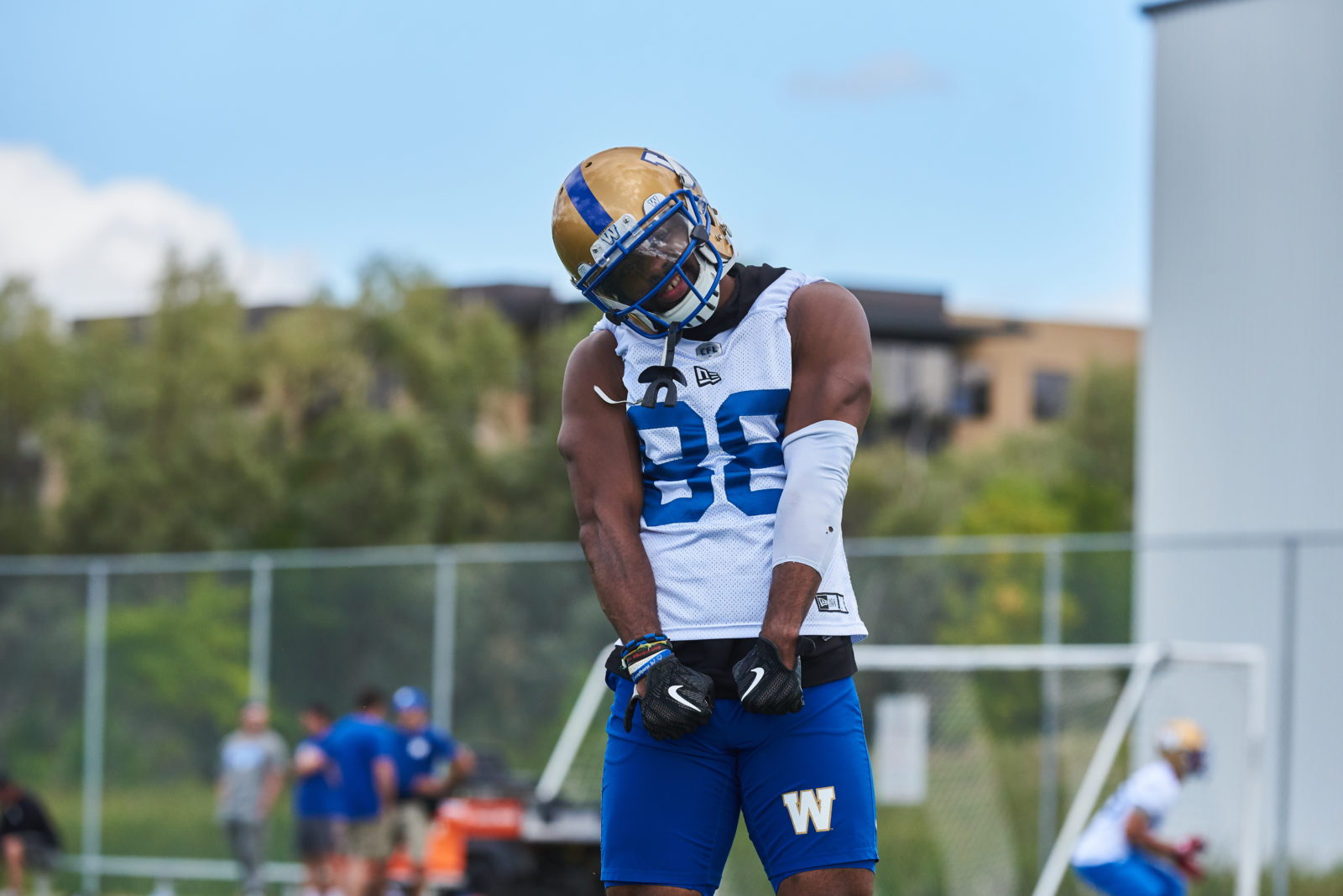 “It’s hard because when you look at my story it’s like every time I catch a rhythm or some type of positivity, there’s always a challenge right there at the door. I just keep persevering. I’ll continue to fight and keep my spirits high.”

That last couple of paragraphs, in just over 100 words, might just best describe Bailey. He got his first shot at the pros with his hometown Eagles after starring at tiny Delaware Valley University and didn’t give up on his dream after getting released over and over again.

Looking back on that journey is why Bailey broke down during interviews on the eve of his first start in last year’s Banjo Bowl. It’s also why he was so elated to be on the field at McMahon Stadium in Calgary last November as the seconds ticked away in the Bombers’ Grey Cup win.

Now, let’s not paint the picture that Bailey is spending his days doing the ‘Why me? thing. He had just finished training when we caught up with him on Friday and just recently had helped conduct a football camp. And he continues to serve as a motivational speaker.

“You look at some of the things that are happening right now… this is all bigger than what we expected. I think it’s OK for us to just breathe for a second. There are other matters right now that are just that much more important. I believe something great is right around the corner.

“When you sit back and think about it, that’s what life is. We never know what’s next. We’re all living on the edge and trying to figure out what’s next and what we’re trying to do with our lives. We just HAVE to stay positive.”

Here are the rest of our notes, quotes, links and other ponderings in this week’s First & 10… 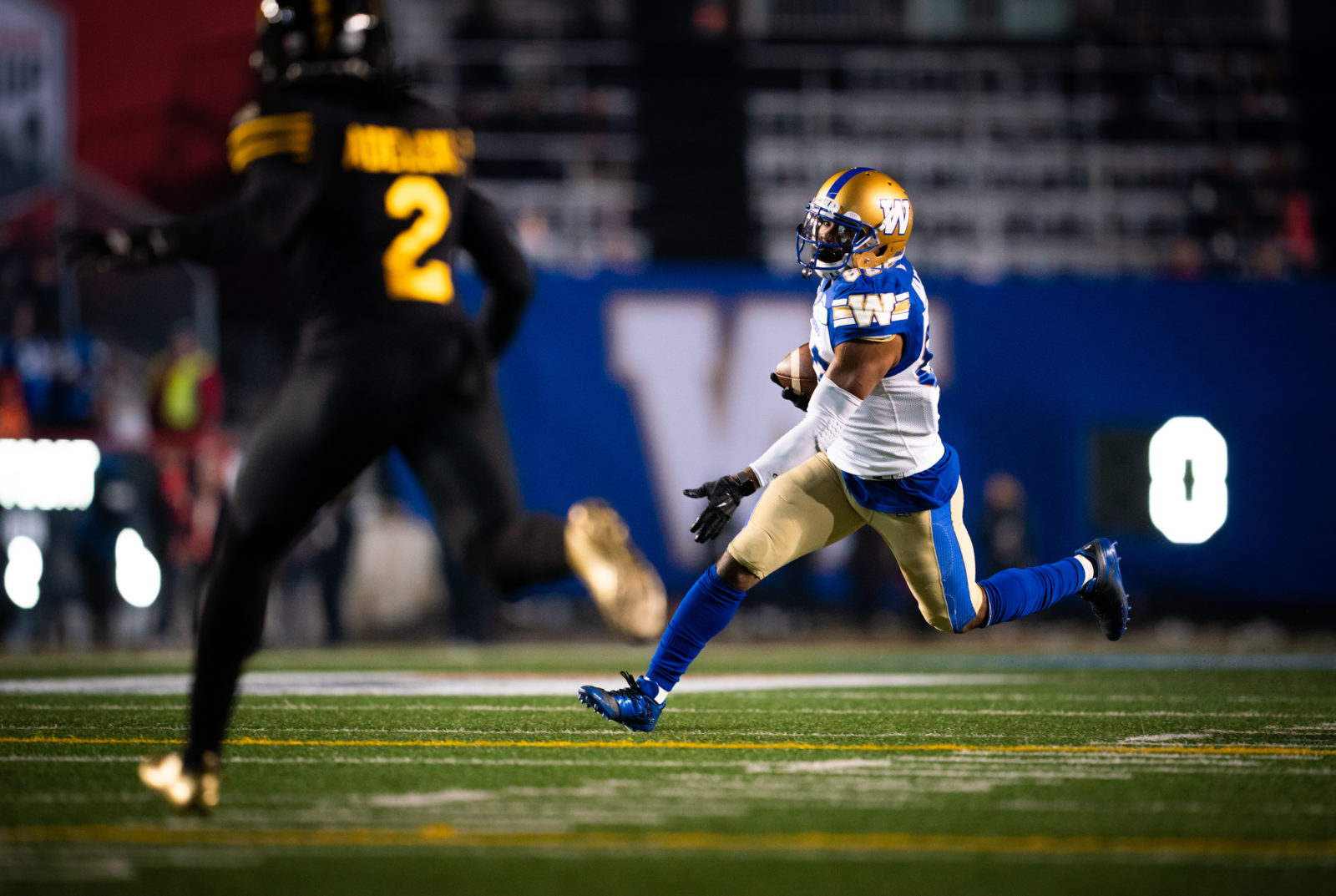 1. The frustration level for everyone in the CFL is at its zenith right now. More than anything, all of us just want some sort of clarity – a thumbs up or thumbs down on a 2020 season.

The CFL issued a statement on Friday that didn’t provide answers.

The #CFL issues a statement regarding the 2020 season. https://t.co/7y72YOXSaz

And the latest news isn’t encouraging as another soft deadline passes.

Sources say the federal government has offered to help the @CFL with a short-term loan, at a high interest rate and fees. League believes taking that kind of loan would put them in a worse position going forward. #CFL

Bailey is big on posting motivational messages on his social media accounts.

I DONE CAME THIS FAR TO BE THIS FAR !!! BEEN FIGHTING MY WHOLE LIFE TO BE DIFFERENT. LIFE AND ITS WORK, DOESN’T STOP WHEN THEIRS ADVERSITY PRESENT. YOU PUSH THROUGH / YOU DIG DEEP / & WHATEVER YOU HAVE TO GIVE / ITS GIVEN ?????#ShowTimeSpeaks #Motivation #ForTheW ?: @dk__create pic.twitter.com/JtsDfzXNNw

They can be powerful, but we asked him if they are as much about providing inspiration for others as they are a reminder to himself.

2. One more from Bailey… he turned 27 on Wednesday and spent the day fishing with friend and former NFL receiver/two-time Super Bowl champion Torrey Smith.

BIG FISH LITTERLY ??Thanks Bro For Today @TorreySmithWR I Really Watched The Sun Come Up & Was Going 40 Mph On The Water ‼️CRAZYYYYYY ????#Chapter27 pic.twitter.com/ppNnDZBfxq

“I’m 27 years old. How can I not be happy?,” he said. “I spent my birthday with my guy, Torrey. We were in Maryland… I’ve never seen the world from that angle.

“We were up at 4:45 in the morning and on my birthday I watched the sun come up and we were going 40 miles per hour on the water. I’ve never experienced that before. I’m a city kid who grew up just seeing traffic lights… so, to be on the water like that and to catch over 100 fish. The whole vibe was different. I just felt… happy. It was peaceful.”

A number of fans e-mailed suggestions to yours truly – thanks for the great feedback, and for reading, by the way – with the following players all receiving votes (I’ve included their Winnipeg Football Club Hall of Fame bios, FYI)

There are no wrong answers, of course, but the number of names in the submissions we received just proves how difficult choosing just one name per year is for the committee.

To read more about the men already on the Ring of Honour, check out their stories here. 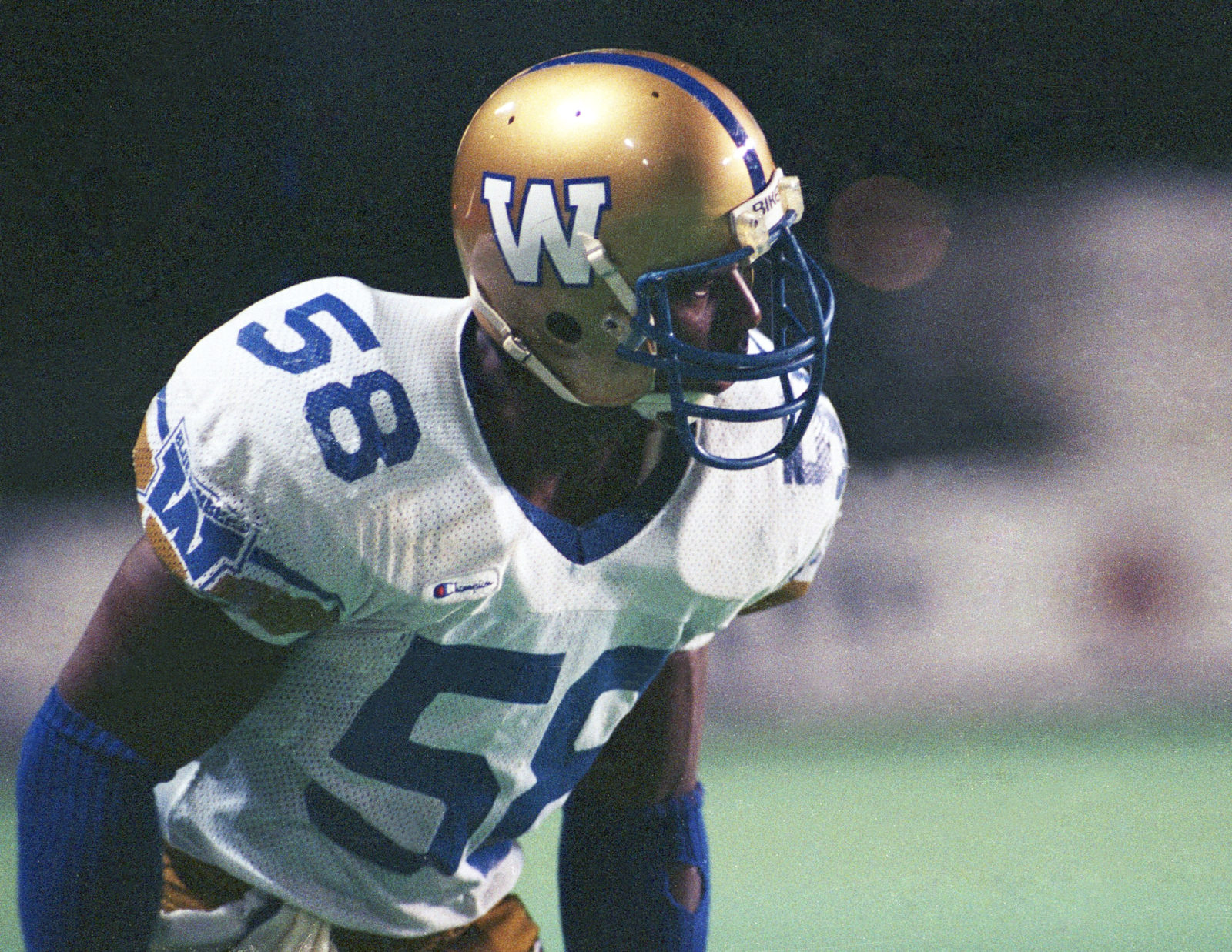 4. Of all the submissions, Joe Poplawski, James Murphy and James West received the most love, with one reader/fan suggesting West and Jones – his late, great friend – both be added at the same time. Not a bad idea at all.

West also got a shout out from Chris Walby, who replied to fan Marc Behrend on Twitter with this:

James “wild west ” was one of the best people/players I ever had the pleasure to play with. Love ❤ the man?

5. And, further to the above, we thought we’d share this e-mail from Sheri Huetter, who offered her support for Murphy – who retired as the Bombers’ all-time leading receiver (since passed by Milt Stegall).

I think James Murphy should be the next Bomber entered into the Ring of Honour. He has won 3 Grey Cups and still lives and works in our great city.

I met James in April of 2019 and there is no one more humble and deserving of this honour. When I told my father I met James Murphy he got so excited and said he was the most popular Bomber during his playing time in Winnipeg. James has done so much for the community of Winnipeg.

Thank you for taking the time to read this.

Have a wonderful August long weekend!

Big thanks to all of our sponsors, curlers and celebrities that help make this possible. pic.twitter.com/MkT5iy6yEX

7. Yours truly is a huge numbers guy and there are some cool tidbits in this piece on CFL.ca about about special teams.

This look at the Las Vegas Raiders new stadium – Allegiant Stadium – is stunning.

And this New York Times piece on sports in a bubble now and in the future poses some interesting questions.

9. Sorry to hear of the passing this week of another member of the Bomber alumni in Gene Lakusiak. He was 78.

Lakusiak played his high school ball in Sarnia, Ont. before suiting up for the University of Tulsa. He played two games for the Ottawa Rough Riders in 1967, and joined the Bombers in 1968, spending the next seven seasons here in Winnipeg.

Lakusiak began as a fullback, switched to linebacker and did a little of everything during his 102 games with the Bombers, including kicking and returning kicks. 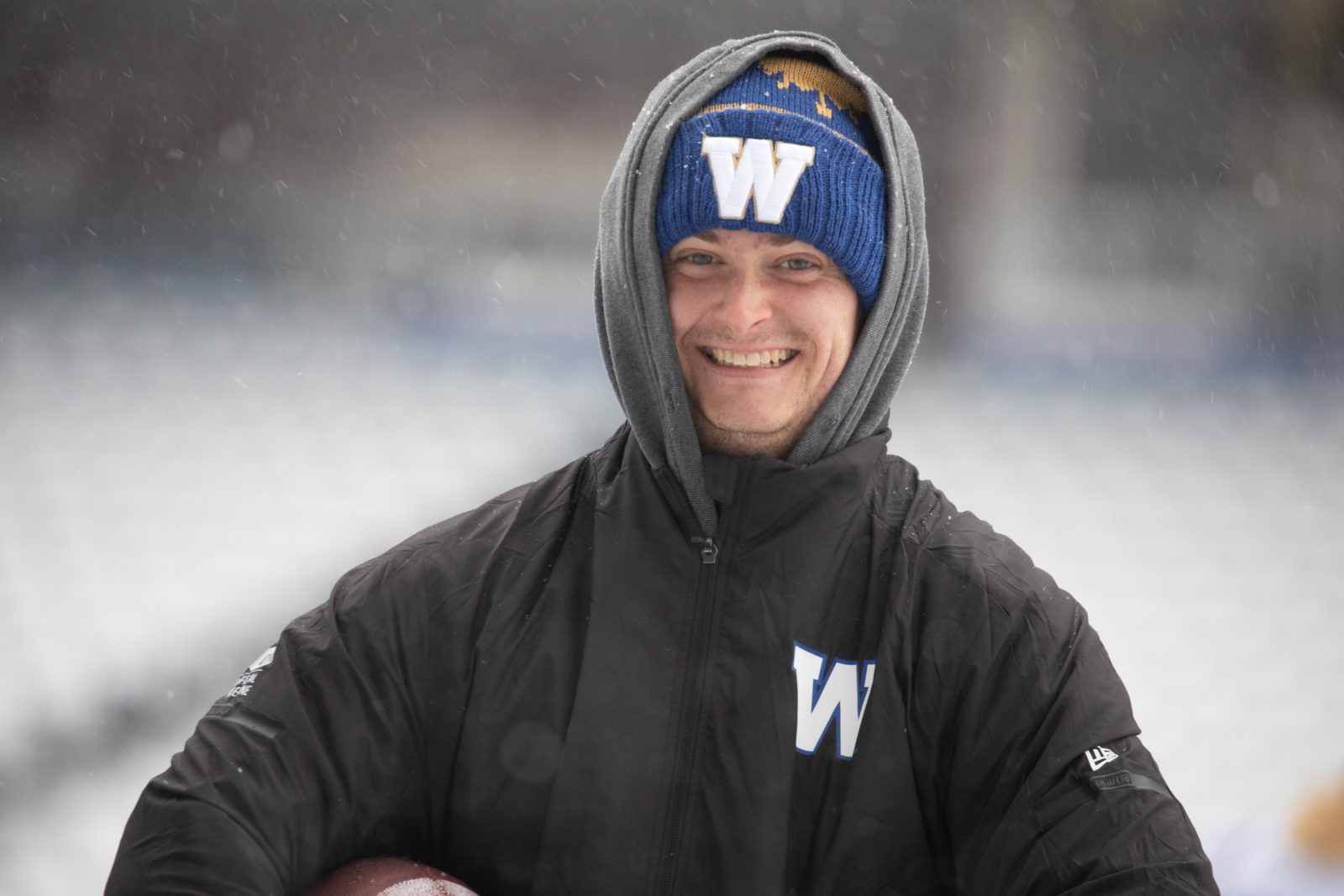 10. And, finally, let’s end this week with some positive news. Two thumbs up – way up – to Bombers assistant equipment manager Jared Cronk, who got the ‘medically cleared’ word from CancerCare Manitoba this past week after months of chemotherapy for an auto-immune disorder.

Cronk has battled through ITP (immune thrombocytopenia) and Evans syndrome and other auto-immune issues since he was three years old. The chemo helps deal with the various flare ups he has experienced, the most recent starting in late January.

“It’s interesting to try and explain what I have,” began Cronk. “It started when I was young and it became one thing and then another thing added on. It morphed and mutated throughout 23 years after that. They’ve developed so many strains of chemo over the years they can attack and not only kill certain things, but boost levels.

Now 26, Cronk works with the Bombers during the football season. Next week he will complete his undergrad in business administration at the University of Winnipeg. He first began volunteering with the Bombers as a water boy in 2007 when he was 13, then began helping Brad Fotty’s crew in the equipment department. He began travelling with the team in 2015.

“I’m cautiously optimistic right now,” said Cronk, a born-and-raised Winnipegger who attended Kelvin High School. “It’s not a cancer where you go in and take out a tumour, so in the back of my mind when I got the news on Tuesday I know things could be flipped the other way next Tuesday. That’s just the way this is. It’s one of those things where you think you’re out of the woods, and you are, but the next flare-up could be tomorrow or it could be in 10 years.

“But, for sure there was a ‘Hell, yeah!’ when I got the news. The first thing I did was text my friends in our group chat to let them know just because with everything that’s gone on forever I wouldn’t be here without them. Same for the people with the Bombers. I’m grateful for their support and very appreciative. It does mean a lot for someone going through something.”