Just over a week ago Kyle Walters and yours truly were conversing about how the already-inexact science that is the Canadian Football League Draft is that much more imprecise courtesy the global pandemic. The meat of that discussion can be found in this piece.

Anyway, it was after that chat when I ventured back to take a look at the 2016 CFL Draft – especially given the consensus in many sports that it takes five years to truly evaluate a draft class.

The Bombers did well in the ’16 Draft despite not having a first-round pick in selecting defensive end Trent Corney ninth, centre Michael Couture 10th, Taylor Loffler 19th, Shayne Gauthier 28th – all of whom suited up for the club.

Yet, just to reinforce the inexact part of all this we need to jump forward one year to 2017. The Bombers had eight picks in that draft, including the first-overall selection, which they used to choose Iowa defensive tackle Faith Ekakitie. The only player from the Bombers ’17 draft class who has made a significant contribution is guard Geoff Gray, grabbed eighth overall.

Still, there’s another player on the Bombers’ roster who made a solid contribution in the Grey Cup season of 2019, including two impressive starts, and has established himself as a quality CFLer. Funny thing about all that… despite shining at the National Combine in 2017, he wasn’t drafted, but instead signed as a free agent afterward with Edmonton. He would make his CFL debut with Bombers, it’s worth noting, but not until being cut by both Edmonton and Saskatchewan.

Ladies and gentlemen… we give you Johnny Augustine. 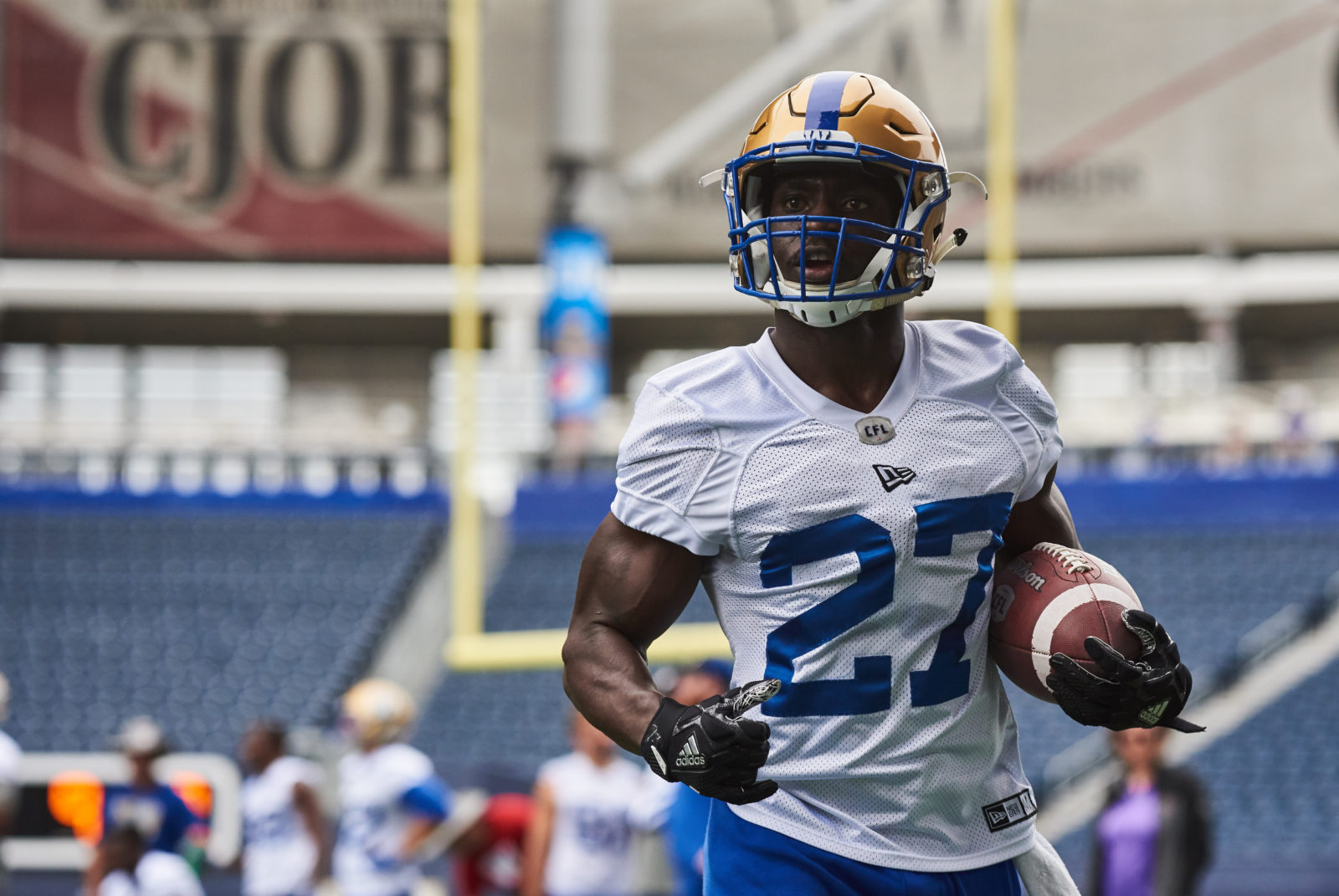 “Going back to that combine, I trained so hard, like extremely hard, to get ready,” began Augustine in a chat with bluebombers.com from his offseason home in Niagara, Ont. “It had always been a passion of mine to play pro. Once my season ended in Guelph in November of 2016 the next day I was in the weight room.

“I lived in Guelph and drove one hour every day to Toronto to train, while working and going to school as a university student. I was working full-time just to pay for my training and gas. When the combine was done I had spent over $5,000 just to get ready for it.

“I was so excited to get invited to the National Combine. I had the right people in my corner and knew what I wanted and so I poured everything into the combine. I knew I was ‘known’ going in, but I also knew I didn’t have a big-time ranking or anything. My mindset was I wanted to come into the combine and show them I was a good football player.”

Augustine was one of the surprises of the Combine, testing well and then jumping out in the one-on-one drills. He went from an off-the-radar prospect before the affair to a player suddenly on every team’s radar screen.

Or, so he thought.

“Yeah, what happened after the combine… it was all so very disheartening,” Augustine admitted. “There were a lot of things going into the combine that I wasn’t sure about. But the one thing I felt confident about afterward was, ‘I’m going to be drafted.’

“So, after the combine everybody was messaging me and my closest friends were telling me to have a draft party. I said I didn’t want that because I don’t like that kind of stuff.

“I got suckered into it and so I did have a party with some of the people closest to me. I had talked to every team going up to it, and after the combine I had been ranked in the Top 20. There was a buzz happening. I went from a guy just being at the combine to a guy who had his stock go up. I wondered how high I was going to go based on what I was hearing. 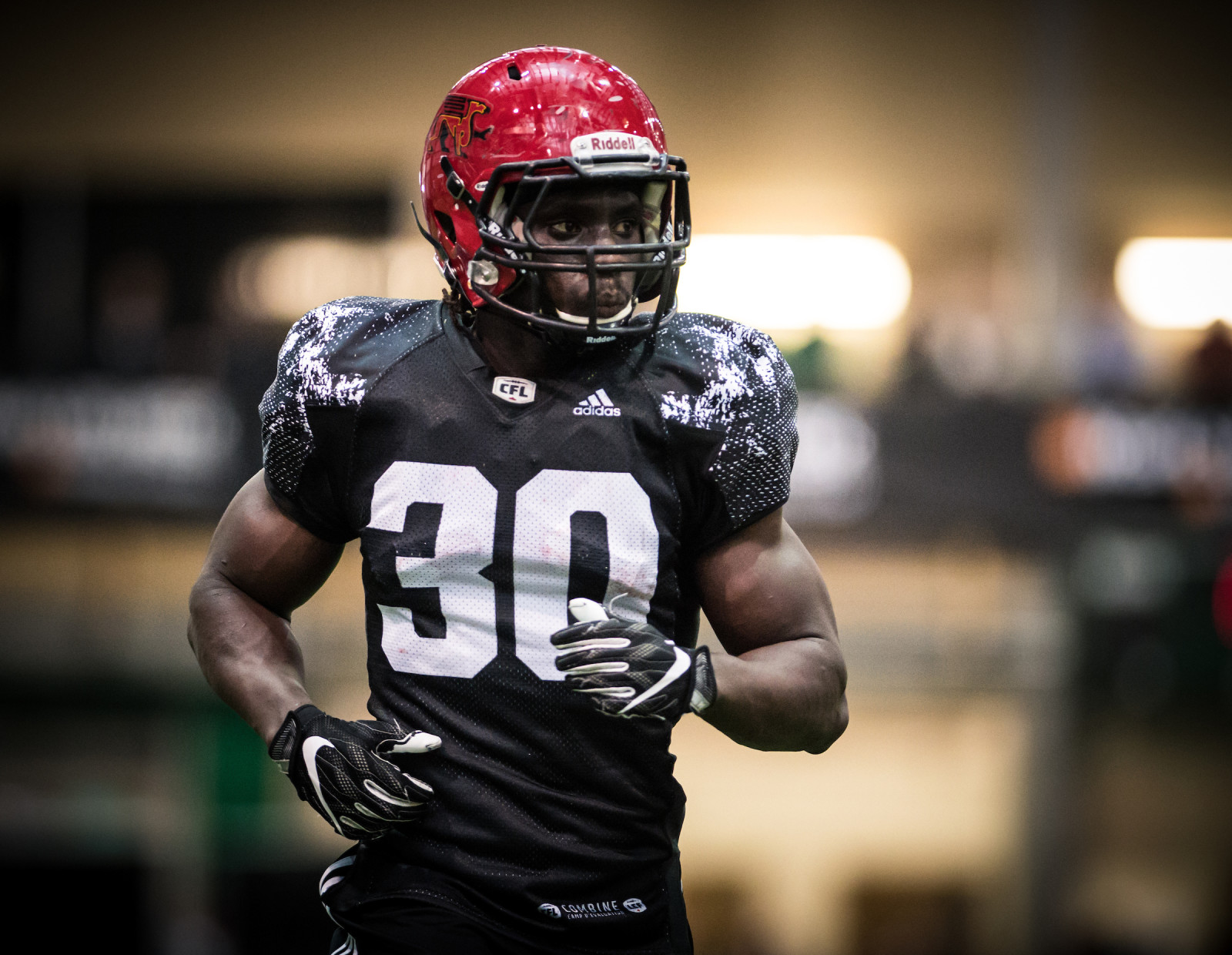 “So, the first round passed and that didn’t surprise me because that’s usually dominated by linemen. Then the second round goes by and I start seeing other running backs go ahead of me. I started to wonder ‘What’s happening?’

“It was one of the hardest times in my life,” added Augustine. “We’re watching into the fourth and fifth rounds and other running backs are going ahead of me. Honestly, I was so embarrassed I had to leave the room. I just told everyone I needed to take a walk. That was tough, I’m not going to lie. I’m not afraid to say I cried because that was my dream.

“But I remember telling myself that this was just a stumble and I had to keep going. The next day after the draft I went to the gym and people were shocked to see me. I just kept working.”

Edmonton signed Augustine as a free agent and he was sent back to Guelph after camp. Lining up at a tight-end/halfback spot in their camp, Augustine worked at receiver for the first five games with the Gryphons.

Edmonton cut him adrift that winter and Saskatchewan signed him. He attended a Roughriders free-agent camp in Florida that spring, but was cut. Signed by the Bombers in mid-May of 2018, Augustine had a superb preseason and earned a spot on the squad.

A year later he made his two pro starts for Andrew Harris, rushing for 98 yards against the Riders in the Labour Day Classic and then racking up 138 yards from scrimmage – and scoring a touchdown – a week later in a win in the Banjo Bowl.

During our conversation, Augustine and I looked back at some of the picks in the 2017 CFL Draft – not to open up old wounds, but as a validation for the work he put in despite not getting drafted to make it professionally.

“It’s a business, I understand that. And teams have to study the measurables,” he said. “I hear people once in a while say, ‘Wow, you played with Winnipeg and you won a Grey Cup!’ But a lot of people don’t know about the journey.

“(Not being drafted) was tough, but I’m not sure I’d change the story now because I’m here. I made it and I was meant to be here.” 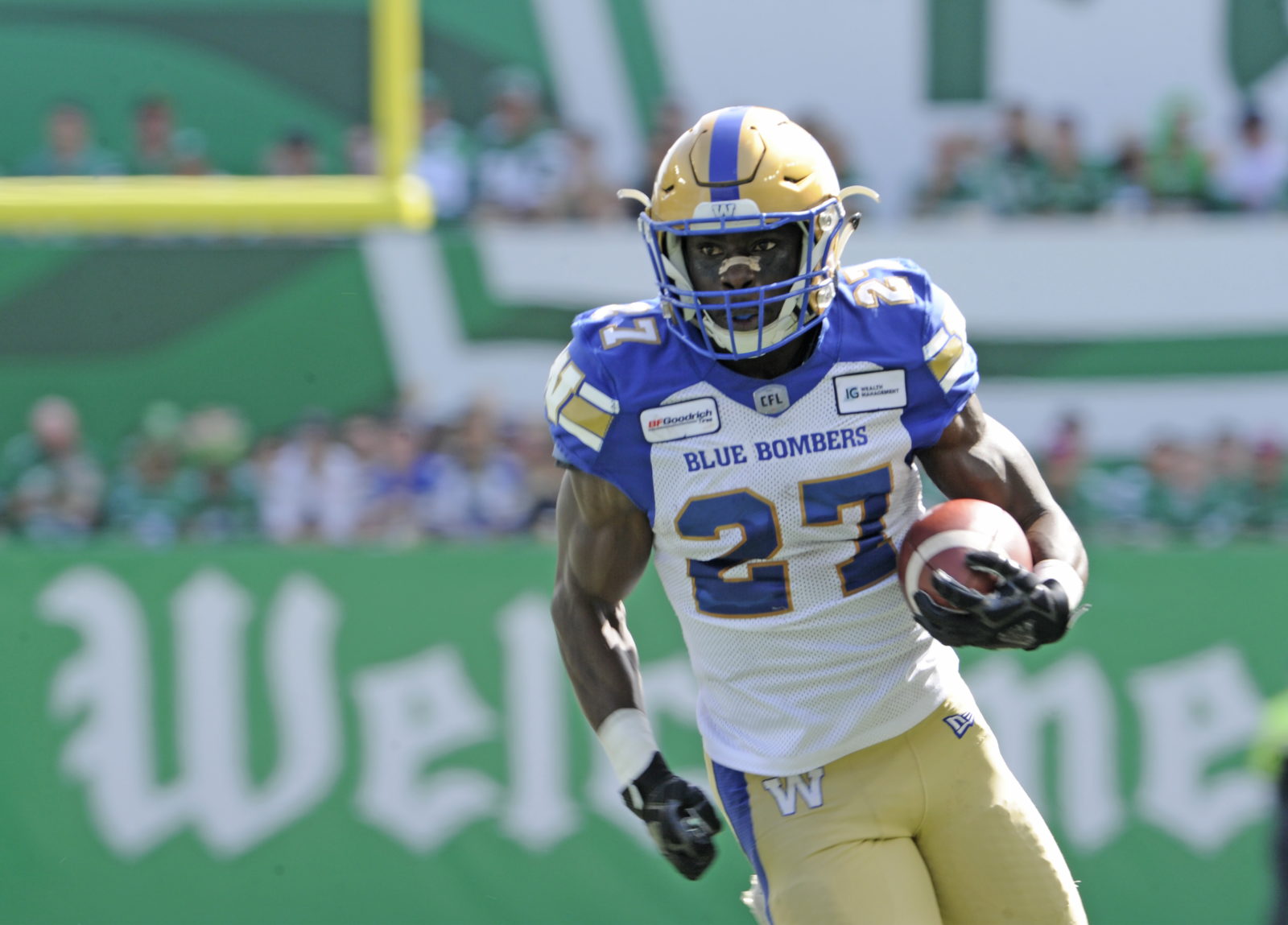 1. One more from Augustine, who had a funny story about attending training camp with Winnipeg but trying to stay low-key given his previous disappointments in Edmonton and Saskatchewan.

“When I got to Winnipeg after being cut from two teams I thought, ‘It is what it is. I’m just going to do the best I can,’” said Augustine. “I just told a few people I had been invited to their camp because I had already been on two teams without ever playing a CFL game. I didn’t want to tell everyone I was going to a team and then keep coming back.

“So I drove to Toronto and parked my car at my buddy’s place near the airport. I was on the practice roster for two weeks and I remember asking Coach O’Shea if I could fly back so I could bring my car back to Winnipeg. I just thought it would be there without even thinking. I ended up coming back and there was $1,000 in parking tickets… it was the best $1,000 I ever spent. Most people would freak out, but I didn’t because it was worth it.”

2. A bit late with this note, but in chatting with Walters he offered this on the retirement decision by free-agent receiver Bryant Mitchell last week.

“It was very much a surprise,” Walters said. “By all accounts he was as excited as any new player we’ve had. He was on the meetings, asking questions, staying late… doing everything above and beyond. He was pumped for the season. It’s tough on these players who haven’t played in a while. He’s got young kids. I don’t want to talk too much about what we spoke about, but it’s a real tough situation for everybody. If he has a change of heart (his retirement) is easily reversible.”

3. The Mitchell signing was considered one of the best in CFL free agency and looked to offer the Bombers passing attack with another big-play threat.

Plus, there will be the usual collection of new faces in camp.

“We’re certainly happy with what we have,” Walters said. “This one (Mitchell) was a part that we weren’t planning on, but it worked out that way. We weren’t aggressively looking to add an American receiver, but once his name popped up… we weren’t looking to add somebody just for the sake of adding. We like our crew. The way it went down with Bryant, he was just too good a player to not try and figure out a way to add at the time.” 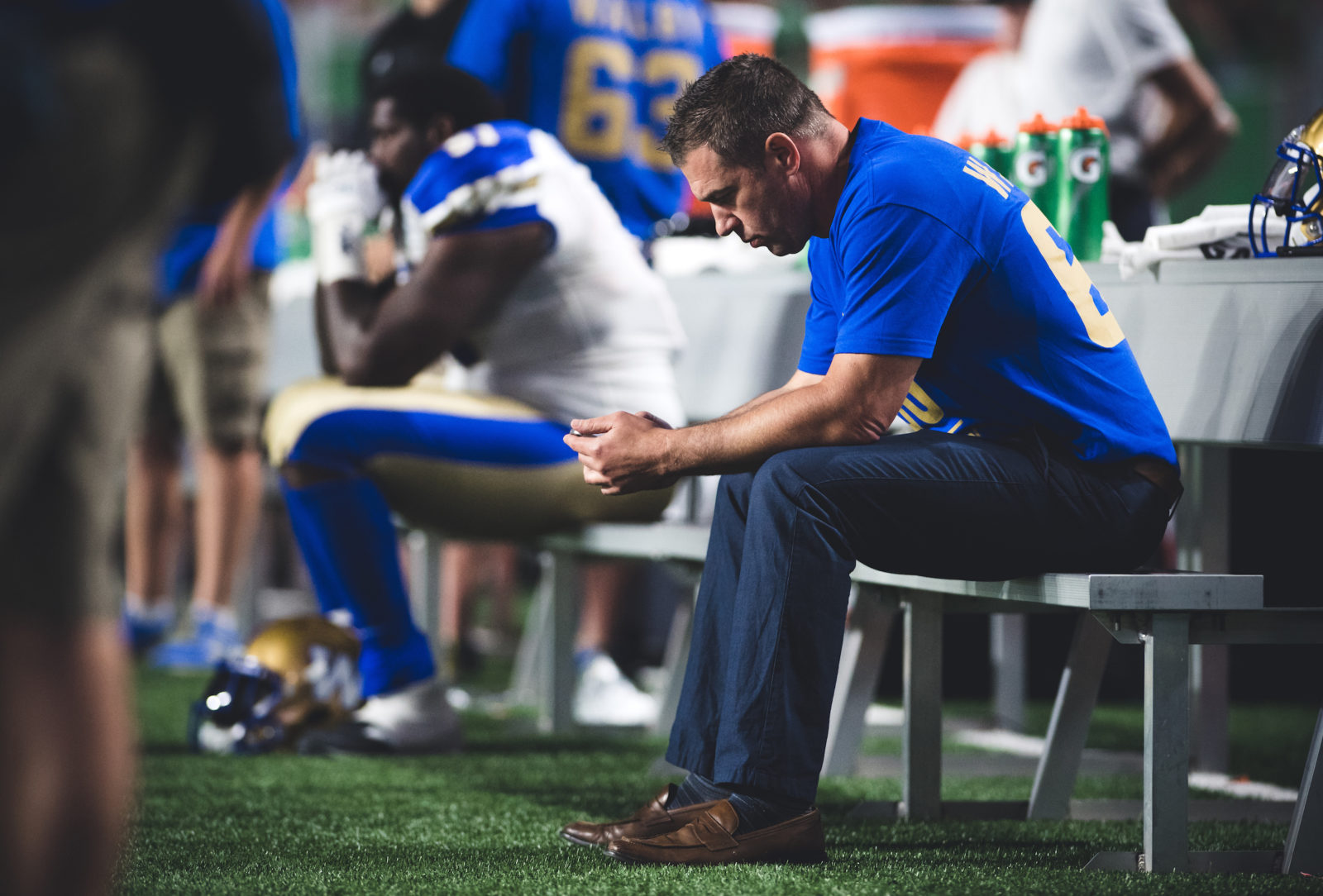 First, Bleska Kambamba – a gifted defensive back from Western and the Bombers’ eighth-round pick – has told the club he is retiring from the game.

5. The CFL announced this week the draft will go on Tuesday, May 4th, beginning at 6 p.m. The first two hours of the draft will be televised on TSN, with the rest on the CFL.ca draft tracker. Again, Winnipeg will select 3rd, 16th, 21st, 34th, 39th, and 48th.

The Global Draft will go April 15th, with the Bombers selecting 4th, 15th, 22nd and 33rd. And for those interested, here are the results from the Global Draft Combine.

Here’s a look from Marshall Ferguson at some of the players who could do well at the virtual combine.

6. It’s been a couple of weeks since the first CFL-XFL in talks to ‘grow the game’ news dropped and, after the initial interest/outrage,  that narrative has quieted down a bit.

It hasn’t disappeared, though.

For those who want to consume more, here’s the latest from TSN’s Dave  Naylor, and one more.

7. If you’re off the believe ‘bad’ news is better than no news at all – or, at least, ‘controversial’  news – then know that the CFL-XFL discussions generated a lot of buzz for our three-down league. According to this piece from Postmedia’s Dan Barnes, the CFL saw a massive jump in social media impressions and engagements over a span from March 10-12.

The details are in this story. 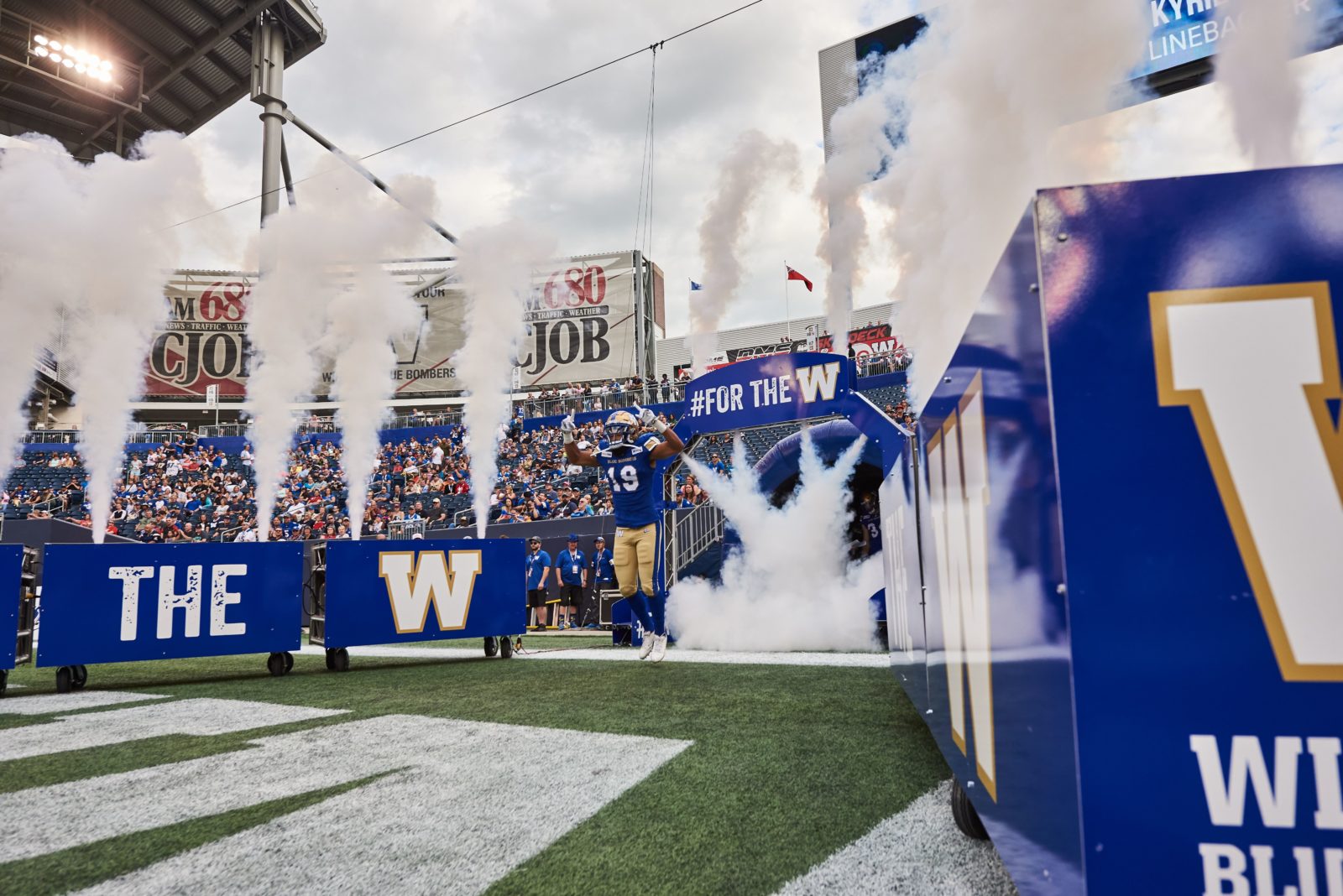 8. Related to the above and for those interested in the CFL-XFL talks, a few fans have wondered about the Dwayne ‘The Rock’ Johnson, Dany Garcia, RedBird Capital partnership that has invested in the XFL after its 2020 season was cut short by the pandemic.

Just this week Fenway Sports Group – owners of the Boston Red Sox and Liverpool FC – announced that RedBird Capital had made a significant investment in the Premier League club.

Also, jumping on board as a part owner is NBA megastar LeBron James. So, yeah, there’s some money behind these guys.

9. FYI: one of my favourite people in all these years covering the CFL is long-time QB-turned assistant coach Joe Paopao. Joe was the Bombers offensive coordinator under Jeff Reinebold and was fired in Year 2 as the organization looked for a scapegoat during a rough start in 1998.

Truly a gentleman, Joe has found work with Adam Rita as the quarterbacks coach of the Barcelona Dragons. Read more about his move here.

10. And, finally, the latest in our series of shameless plugs…

Bombers assistant coaches have been conducting virtual coaching clinics over the last few weeks and they’ve been fantastic. The previous editions can be found here and there’s still time to sign up for the final two, both featuring head coach Mike O’Shea.

They’re both worth checking out: