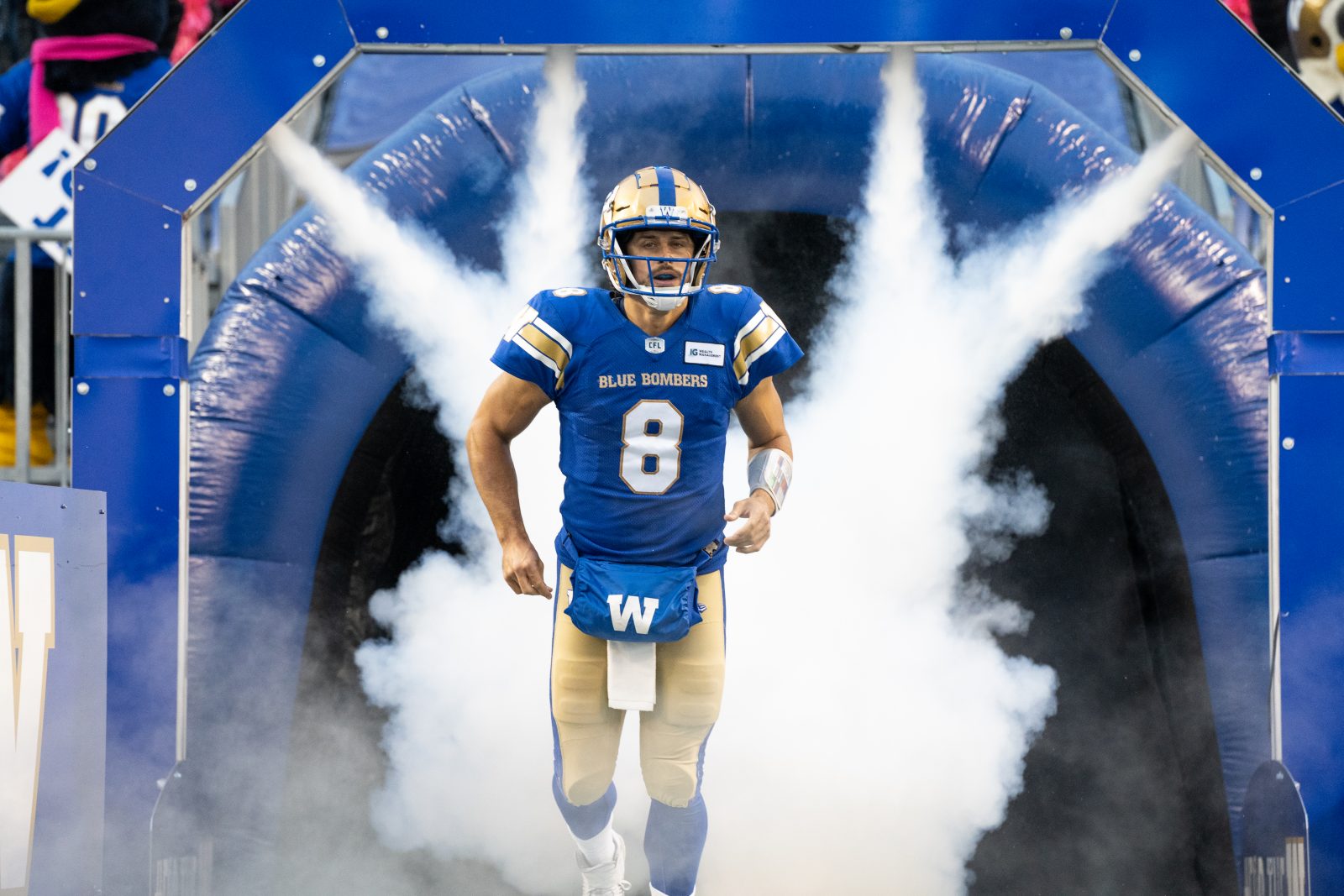 The plaudits have come fast and furious over the last few days for Zach Collaros and the Winnipeg Blue Bombers, arriving in abundance like a heavy and sudden snowfall.

It began with the 15 players named to the Canadian Football League’s West Division All-Star team on Wednesday. And a day later three players – Collaros, linebacker Adam Bighill and left tackle Stanley Bryant along with head coach Mike O’Shea – were named as finalists for the Most Outstanding Player Awards and Coach of the Year. To no one’s surprise, while welcoming the recognition those saluted clearly have their eyes collectively focused on a much bigger prize.

“We’ve worked hard this season and after having a year off, we had a lot of time off to think about the season and put more work into it,” began Collaros, the West Division nominee for the CFL’s Most Outstanding Player Award. “These accomplishments and this recognition is nice, but we all signed up for one thing and it’s to win the West and go on and play in the Grey Cup and win that, too.

“We’ll enjoy this today, just as we do after a win, but we have one goal, one mind and right now it’s to get better with the rest of the day that we have and tomorrow as well and see who we’re going to play here on December 5th (in the Western Final).”

Dating back to 2016, at least one Blue Bomber has won a CFL Most Outstanding Player award – Justin Medlock (special teams, 2016); Bryant (offensive lineman) and Harris (Canadian in 2017); Bighill (defensive) and Bryant (offensive lineman) in 2018 and Jefferson (defensive) in 2019. A Blue Bomber boss hasn’t been named coach of the year, meanwhile, since Dave Ritchie in 2001.

Both Bryant and Bighill are already multiple Most Outstanding Player Award winners, while this is the first finalist nomination for Collaros. His play this season in helping lead the Bombers to first place and his statistics alone make him a fascinating story. But it’s what he has overcome in the last few years that makes his tale all the more compelling. Remember, Collaros had only taken a few snaps before being twice traded in 2019 – the second time to the Bombers – and then led this club on a memorable run to the Grey Cup.

And now he’s up for the Most Outstanding Player Award. Asked if he could appreciate how cool that story is, Collaros offered this:

“I really don’t like talking about myself and saying ‘I’. I always tell my wife, ‘We’re a ‘we’ family. ‘We’ do this, ‘we’ do that.’ I’ve always just kind of kept my head down and continued to work and let the chips fall where they may, so to speak.

“It’s been a cool story so far and a cool ride, but the past doesn’t matter and we’ve got to just focus on the moment, continue to get better this week and get ready for this West Final.”

His 2021 numbers: Collaros led the CFL with 20 passing touchdowns and a quarterback efficiency rating of 111.0 and his 3,185 passing yards ranked second to B.C.’s Michael Reilly. The Bombers were 11-2 in his starts this year and are 15-2 dating back to the magical playoff run of 2019 after his arrival at the trade deadline.

FYI: A Blue Bomber hasn’t been named the CFL’s Most Outstanding Player since Milt Stegall in 2002, a year after Khari Jones captured the award in 2001. Since then, only one player – quarterback Kevin Glenn in 2007 – has even been a MOP finalist.

His 2021 numbers: Bryant again anchored the left side of the Bombers offensive line, helping the offence lead the CFL in scoring, surrendering the fewest sacks while finishing second to Montreal in net offensive yardage per game.

Bryant says: “We have to keep the mindset that the job isn’t done. We’ve earned the right to play in the playoffs and we have this week off, but we have to understand there’s more to do. We have the West Final coming upon us and if we want to get to where we want to go, we have to go out there and handle business on December 5th. And if we do that then we get to the Grey Cup and have to handle our business.”

His 2021 numbers: The veteran middle linebacker played in all 14 games for the Bombers this season and led the club with 70 tackles, adding two quarterback sacks, two forced fumbles, two interceptions and a fumble recovery for a touchdown.

FYI: Willie Jefferson won this award in 2019, with Adam Bighill preceding him in 2018. The last time one CFL team had players win three consecutive Most Outstanding Defensive Player awards was the B.C. Lions from 2014-16 with Solomon Elimimian in ’14 and ’16 and Bighill in ’15. It has never happened before in the history of the Blue Bombers.

Adam says: “I’m very fortunate to be among this group of guys and to obviously be nominated. As I’ve said, our defensive locker room is so talented… to be the guy named is very humbling. We did a lot of great things defensively this year, so it’s pretty exciting stuff.”

COACH OF THE YEAR: Mike O’Shea

FYI: The Bombers finished the regular season with an 11-3 record, led the league in scoring, allowed the fewest points and were the least penalized squad. O’Shea is 67-55 during his days as the Bombers coach, including 55-31 over the last five seasons. He ranks behind only Bud Grant (102) and Cal Murphy (86) in franchise coaching wins.

Collaros on O’Shea: “He’s very well deserving of the honour. I can’t say enough good things about Osh. He knows that, you guys know that. He’s one of the best coaches I’ve ever been around in my life, if not THE best.”